Last week, Marvel’s What If…? changed the rules by showing us that all of the previous episodes were actually connected. This week, the season one finale took things a step further by bringing everything you’ve seen together to combat the new threat to the multiverse. The Watcher has to break his oath to save life as we know it and the result is an epic battle. 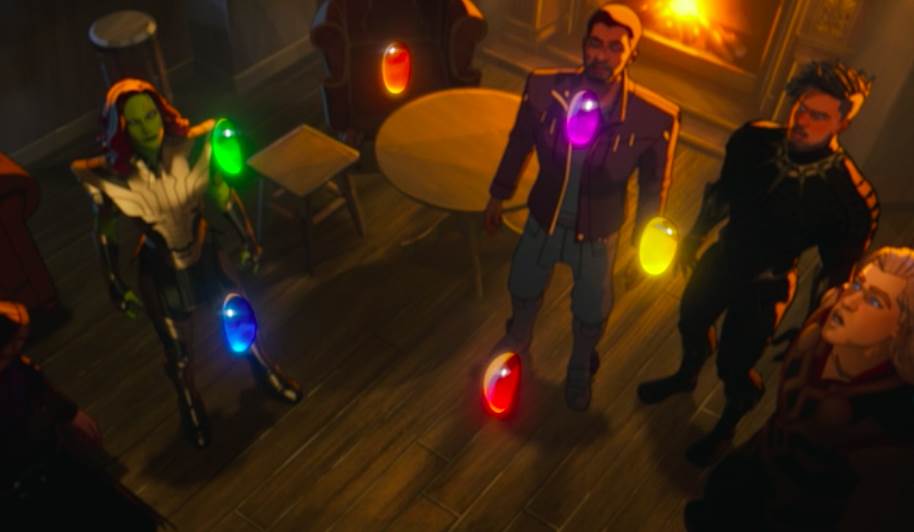 The episode opens with Captain Carter preparing to launch the mission on the Lemurian Star, as we saw in Captain America: The Winter Soldier. Peggy confronts Batroc, just like we saw in the movie, but gets distracted when she sees The Watcher. He informs her that she has been chosen and he teleports her away.

Next, we see Peter Quill getting attacked by Ego before being saved by Star-Lord T’Challa, who is then chosen by The Watcher. Then we see a universe we actually haven’t seen before, where Gamora and Tony Stark are working on destroying the Infinity Stones. They’re interrupted when The Watcher appears to select Gamora, but notably not Stark.

Interestingly, The Watcher’s next target is Killmonger. We see Pepper and Shuri rushing to the throne room to attack him but when they arrive, they find it empty. This was the one episode of which we were unsure, because we didn’t know if The Watcher would be willing to put a villain on his team.

We then see Thor fighting with Ultron bots in Las Vegas before The Watcher arrives. Thor ignores his presences as he continues to battle Ultron. It’s a humorous moment as The Watcher has to pick Thor up and force him to come with him. He screams his way into a mystical pub in a moment that looks like it came right from Thor: Ragnarok.

Evil Doctor Strange appears to inform the team of assembled heroes that he chose the pub facade because he figured it would make them comfortable. Thor accepts a beer and slams an Ultron head on the bar, which immediately gets Killmonger’s attention. The lights flicker and The Watcher appears to inform the team of their mission, to stop Ultron and save the multiverse. He even gives them the title “The Guardians of the Multiverse,” which doesn’t exactly fit with the Avengers assembly gimmick. 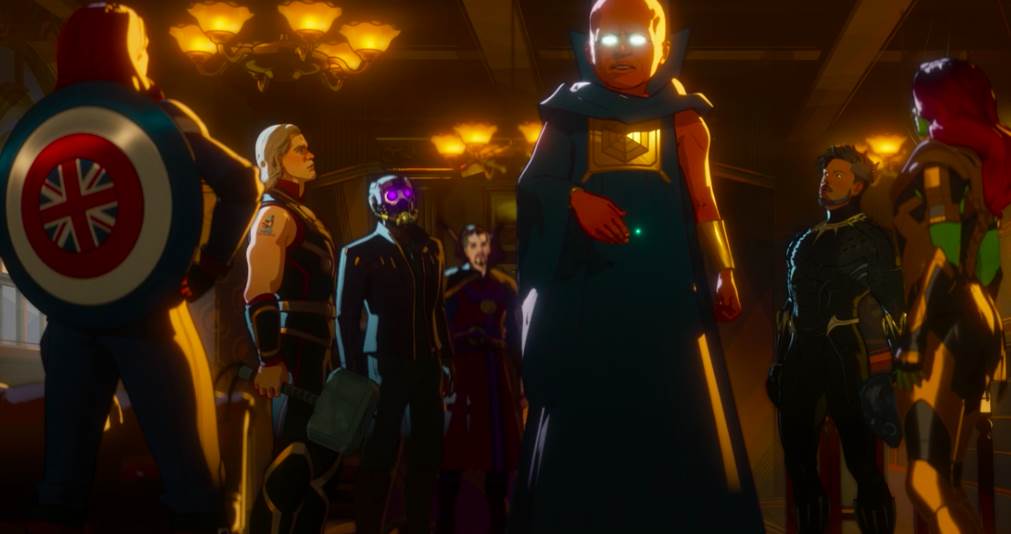 The team arrives in a universe without enough intelligent to draw Ultron’s attention, with the plan to get the Soul Stone and give it to Gamora, who has a device that can destroy the stones. Gamora watches as Killmonger fiddles with the Ultron head and questions whether or not they can trust him.

Thor accidentally gets Ultron’s attention before the team was ready and the fight begins. Strange casts a protection spell on the team as Killmonger and Gamora walk through a portal to an unknown location. Thor goes rogue and shouts “Viva Las Vegas” as he blasts Ultron with lightning, which is ultimately ineffective.

The team launches their plan, which involves T’Challa stealing the Soul Stone. Strange unleashes one of the monstrous creature he’s absorbed and the team makes a run for it, but not before Ultron notices the Soul Stone is missing. As an added distraction, Strange opens a portal, dumping hundreds of zombies on Ultron. He informs Thor that it’s not the zombies he’s using, it’s what comes with them. As the team escapes, we see Ultron come face to face with zombie Wanda, who unleashes her magic on him. To her surprise, he absorbs it and then simply blows up the planet.

The team arrives in Ultron’s original universe. As Carter tosses the stone to Gamora, it is intercepted by that universe’s Black Widow. Carter explains to the team who she is and they convince Widow that they are there to destroy Ultron.

Ultron arrives and tries to recover the Soul Stone, starting a big cinematic fight with the team that mirrors the one with Thanos in Avengers: Endgame. Ultron tries to blow up the planet, but Strange absorbs the explosion, saving them all. The race for the Soul Stone is on until Ultron decides to use the Time Stone to freeze everyone else. Strange is unaffected though, as he still has his own Time Stone. He unleashes the full force of the darkness he’s absorbed, which gives the team the chance to pin Ultron down and unleash the Infinity Stone-destroying device, which is apparently successful. 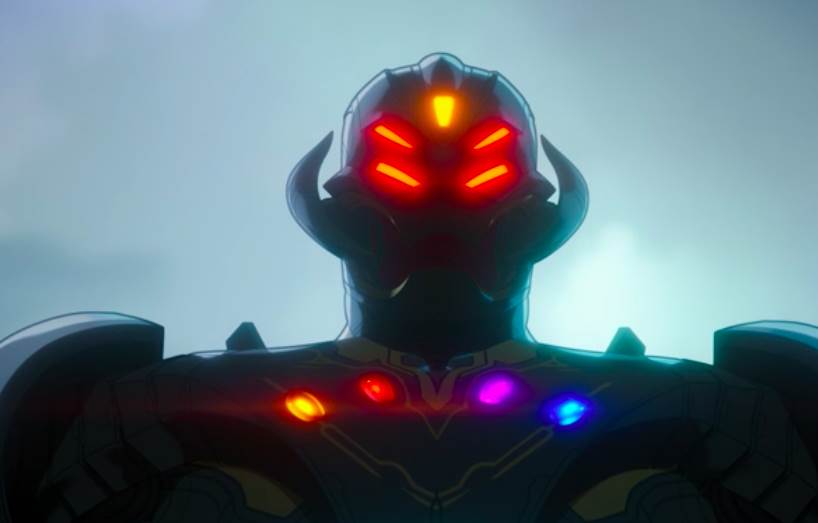 The celebration doesn’t last lon though as Ultron’s voice returns to inform the team that their device was meant to destroy the Stones in Gamora’s universe, but the stones here are different. Therefore, the device didn’t work. Ultron reappears with all of the stones and attacks again before realizing he needs to take out Strange first.

He launches an attack the blows Carter and Widow away from the group. Widow spots the arrow with the Zola virus in it and makes a plan with Carter. As Ultron is distracted trying to destroy the rest of the team, they sneak up on him and Widow shoots the arrow while Carter peels back his faceplate to provide a target. The arrow hits Ultron right in the eye and the Zola virus is uploaded. Zola attacks Ultron to try and take over his body.

Ultron’s unconscious body falls to the ground and Killmonger approaches it. He somehow uses the ultron head to summon the armor to himself, claiming the Infinity Stones as well. He tries to tell the team The Watcher owes them this and that they can use the stones to fix their worlds and get back everything they’ve lost.

The team refuses and Killmonger attacks them. He is interrupted though when Vision’s body, now controlled by Zola, stands and says the stones belong to him. Notably, he has the closest look we’ve seen to his comic book look, with his face appearing in the stomach of Vision’s body.

Zola and Killmonger fight for the stones as Strange realizes this was The Watcher’s plan all along. He captures the two of them and the stones in a pocket dimension. As soon as he accomplishes this, The Watcher appears and teleports Strange away, leaving the team behind.

The Watcher returned Strange to his prison, where he reveals that he knew all of this would play out exactly as it did. Strange is tasked with guarding the pocket dimension for all-time, to make sure neither Killmonger nor Zola ever escape with the stones. He accepts his new mission.

The Watcher returns the rest of the team to the pub and lets them know he’ll be sending them back to their worlds. The team walks through the door back to their homes, but Carter hesitates. She wants to return to another time where she can be with Steve, but The Watcher informs her that her world is going to need Captain Carter and she eventually goes.

That leaves only Black Widow with The Watcher. She has not world to go back to because everyone else in that universe has been killed by Ultron. The Watcher eventually sends her to another universe that has already lost its Widow. She sees the Avengers fighting Loki and his army and she joins the fight just in time to save Nick Fury. This furthers the precedent set in Avengers: Endgame with Gamora that any character can return. Whether it’s time travel or the multiverse (which are kind of the same thing at this point) there are ways for any character to be brought back.

The episode comes to a close as we see the rest of the team in their respective homes. Meanwhile, The Watcher explains that the multiverse is his home and he will protect it till the end. The episode isn’t completely done just yet though as we get a mid-credits scene where Carter returns to her fight with Batroc. Widow takes out Batroc and leads her to a shipping container holding the Hydra Stomper and tells her there’s someone inside. Carter shows a surprised look before the credits role. 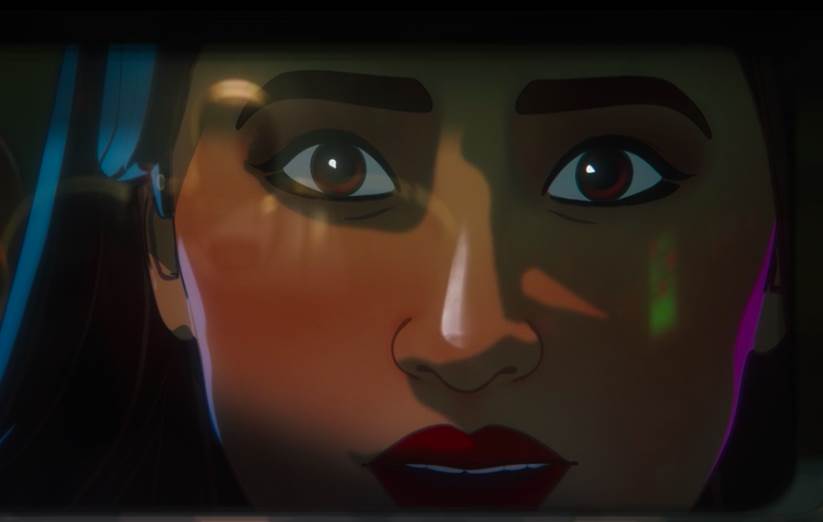 This was an absolutely epic finale to this truly unique show. It not only provided us with some incredible action and a huge fight we otherwise never would have gotten to see, but it also provides the best example of just what the multiverse can mean for the future of the Marvel Cinematic Universe. It look like this show will open a lot of eyes for Marvel fans and give them just a taste of what’s to come.