It’s haunt season throughout the world, but also in the middle of Central Florida, where theme parks get in on the fun but so do local groups that have become annual traditions like the local haunt turned annual tradition, A Petrified Forest, just north of Orlando and the big name parks in Altamonte Springs. First and foremost I must say that this event already scores big points with me because it’s an independent haunt venture that has no formal ties to the bigger events around Central Florida. There are no corporations to please, there is no IP, there is no branding that requires level upon level of executive approval. These are just local performers, artists, and haunt enthusiasts who use this piece of property to make each year the best they can with an original story and the freedom to tell it the way they want.

The name “A Petrified Forest” is not a joke, not a marketing gimmick. You are in the middle of the woods in Altamonte Springs, Florida, just north of Orlando. Though the property sits on a little over an acre, once you’re in the haunted trails of the event, you would never believe that, as it feels like you are going deeper and deeper into the woods. The event first began in a local neighborhood in the mid-2000s as a special event for nearby residents but grew so popular that the neighbors encouraged the creators to…find someplace else. And find someplace else they did, when they discovered the empty lot that the event currently takes place each year, growing over time in size and popularity.

According to a backstage tour I was fortunate enough to take part in, for the first time, an elaborate story was created and told for the event and all the trails are tied together, and this year there are three trails that take you into the deepest parts of the forest (as well as your imagination). Back in the days of the booming cross-country train industry, Mr. Cornelius Fisk wanted his piece of fame and fortune. He wanted to forge a new path out west that hadn’t been taken… for good reason. Against all warnings to build a track through a certain patch of forest Mr. Fisk’s greed blinded him. There were tales of a monstrous being that protected the land. Mr.Fisk didn’t care and wanted his train's maiden departure to make headlines for speed and to be the first through this new area. The day of departure took off without a hitch and all the pomp and circumstance Mr. Cornelius Fisk's averous heart craved. While ordering more speed the train approached the patch of forest. The engineer called to warn him that something was on the tracks ahead. Mr. Fisk would have nothing ruin his big day and as they got closer they saw the terrifying form of a deer headed man like creature on the tracks…a Wendigo. Mr. Fisk said without hesitation to “Run it down!” The Wendigo however was there to bring vengeance for his land and crashed the train with his power in a horrifying heap of twisted metal and mangled bodies. The Wendigo scoured the wreckage, ripping and slashing apart all survivors leaving not a soul to tell the tale… or so he thought.

On the edge of the forest gathering firewood the little girl of the local taxidermist saw everything. Her eyes grew wide taking in the horrors unfolding in front of her, yet she wasn’t frightened. It awoke inside her a bloodlust for the macabre. She learned her family's trade as she grew up but quickly surpassed them. Her skills with her sewing machine and hand stitching were unmatched and she soon grew bored of standard taxidermy. She started making creations of different animals spliced together. Her parents were enraged at discovering the abominations, as they called them, that she had fabricated. They punished her by taking away her sewing privileges. This would not end well for them….they became her first victims of what she truly wanted to create, human-animal hybrids to mirror the strength and ferocity of her mysterious Wendigo. She became more masterful in her “art” to the point that she could keep people alive while melding them together with animals and soon the forest grew thick with the monsters she devised. All the while the Wendigo watched… He admired her skill and welcomed her fashioned beasts in his forest. He frequently visited the woman, forging an unnatural bond with her and relations he shared with no other human. Their intimacy led to a child of their own. Passing on from descendant to descendant their bloodline of depraved wrath. 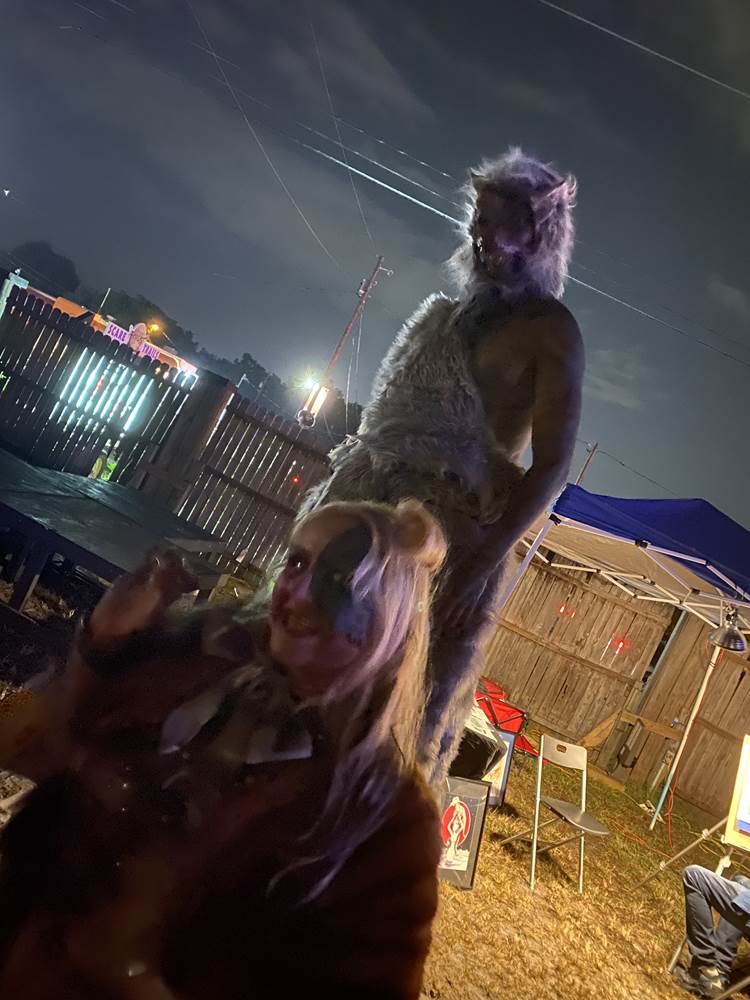 ​Many generations later the greed and gluttony of man would again cause destruction. The apocalypse raged and left the world in a desolate hellscape where only the strong survived. People who could leave behind the decency and regular human empathy to withstand the food shortages of a wasteland. Only a man with Wendigo blood coursing through his veins would have the power and prowess to succeed. The man known only as Saul leads his clan of cannibalistic warriors to thrive and rule over this new world by taking what he needs whatever the cost. His cruelty and viciousness embodies the spirit of his Wendigo ancestor and it is said that his presence is once again felt and seen in this forsaken patch of forest. Unlike the haunt events at major theme parks where guests might find themselves passively walking through taking in the environments and performers, A Petrified Forest pulses guests in their own parties (or smaller groups) and walks through the environments where performers not only scare, but interact with you making this a far more intimate, and sometimes truly frightening experience. This year, performers also were given kind of a free reign to create their own characters which add so much depth and layering to the lore of this event and built up the sets into a living, thriving environment in each of the three trails: 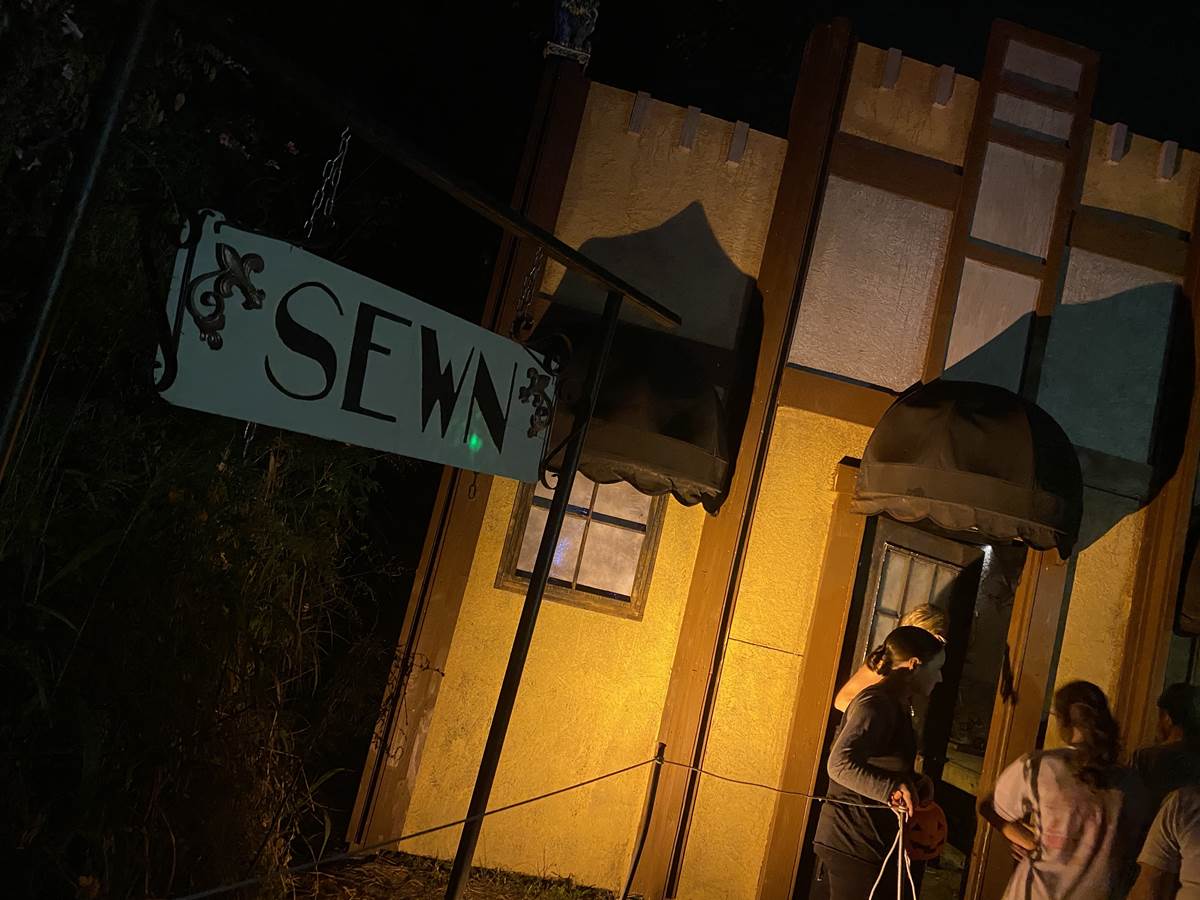 Sewn – is the home of artist Ida Steek, that aforementioned daughter of taxidermists who is skilled with a needle herself. This one is substantially more eerie than scary, with lifeless performers coming to life at the last moment leaving you to wonder what is real and what isn’t. At one point a performer even held out a candle for us, almost suggesting we take it, and realizing through the next sections of the trail, yeah we probably should have as they took place in near total darkness. Unleashed – The apocalypse has happened and survivors have come to the Wendigo’s land where they are trying to find food wherever they can, including the humans passing through. This trail is frightening, and definitely one where those interactions between guests and performers shines even though on our walk through they were unintentionally flattering. Acting as cannibals, but saying “that’s a nice calf muscle…looks tasty”… stuff like that. 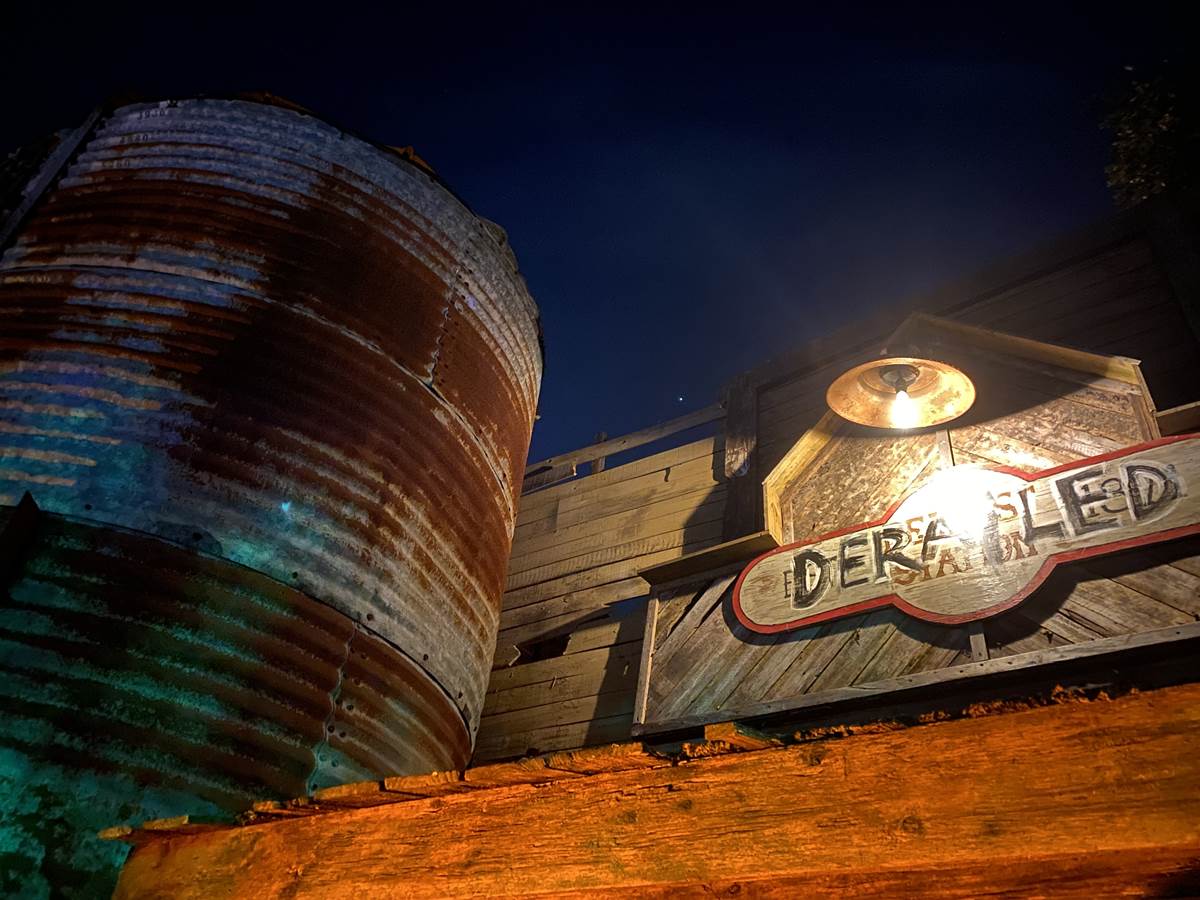 Derailed – In Derailed, visitors get to explore the wreckage of the ill-fated train that crashed as it entered the Wendigo’s land. They’ll go through the train cars and encounter the souls that perished while on the journey, and even into the depths of a swamp where creatures roam beneath the surface. Don’t worry, you’re not getting wet! This effect is brilliantly achieved via lasers and fog, but the terror of what lies beneath is all too real. All of the trails are accessed from the “front yard,” an area that is home to a stage for performers, local artist booths, food trucks, and the requisite booth offering event shirts and garb. This also acts as the waiting area as you are assigned a color when you arrive to the event, and once that color is called, you can start exploring the trails. This definitely helps provide that intimate experience I mentioned earlier, and keeps the small plot of land the event takes place on from overcrowding to a point of discomfort. It’s brilliantly executed and works quite well. 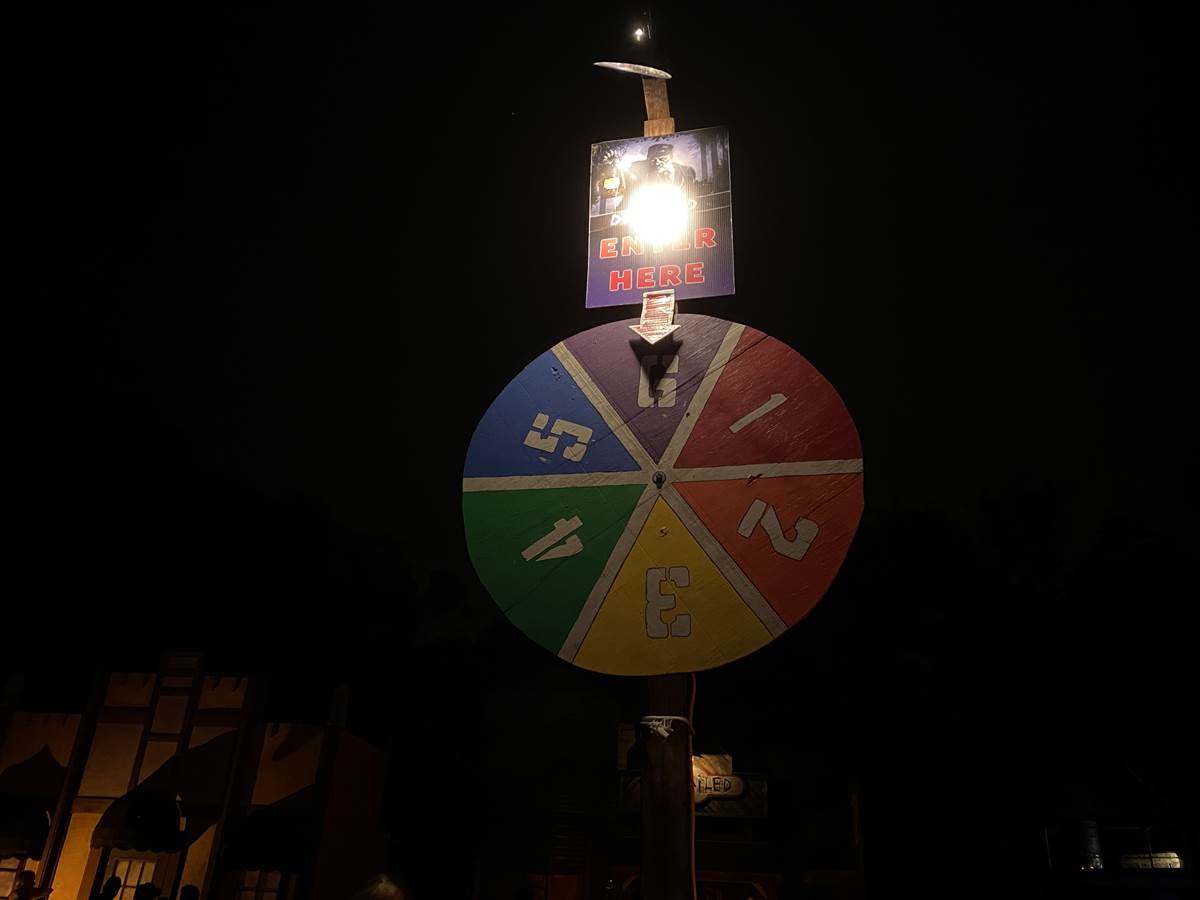 Also found in the front yard are roaming performers, including the Wendigo himself. I must say though that the Wendigo is notoriously difficult to capture on camera as he does not stay in one place. The picture near the top of the page is actually the best we could do as he tore through the crowd and we captured a glimpse of him on video. Most attempts, like any supernatural offering in the world, tend to come out blurry and are told through stories of those who saw it in person. See Below: 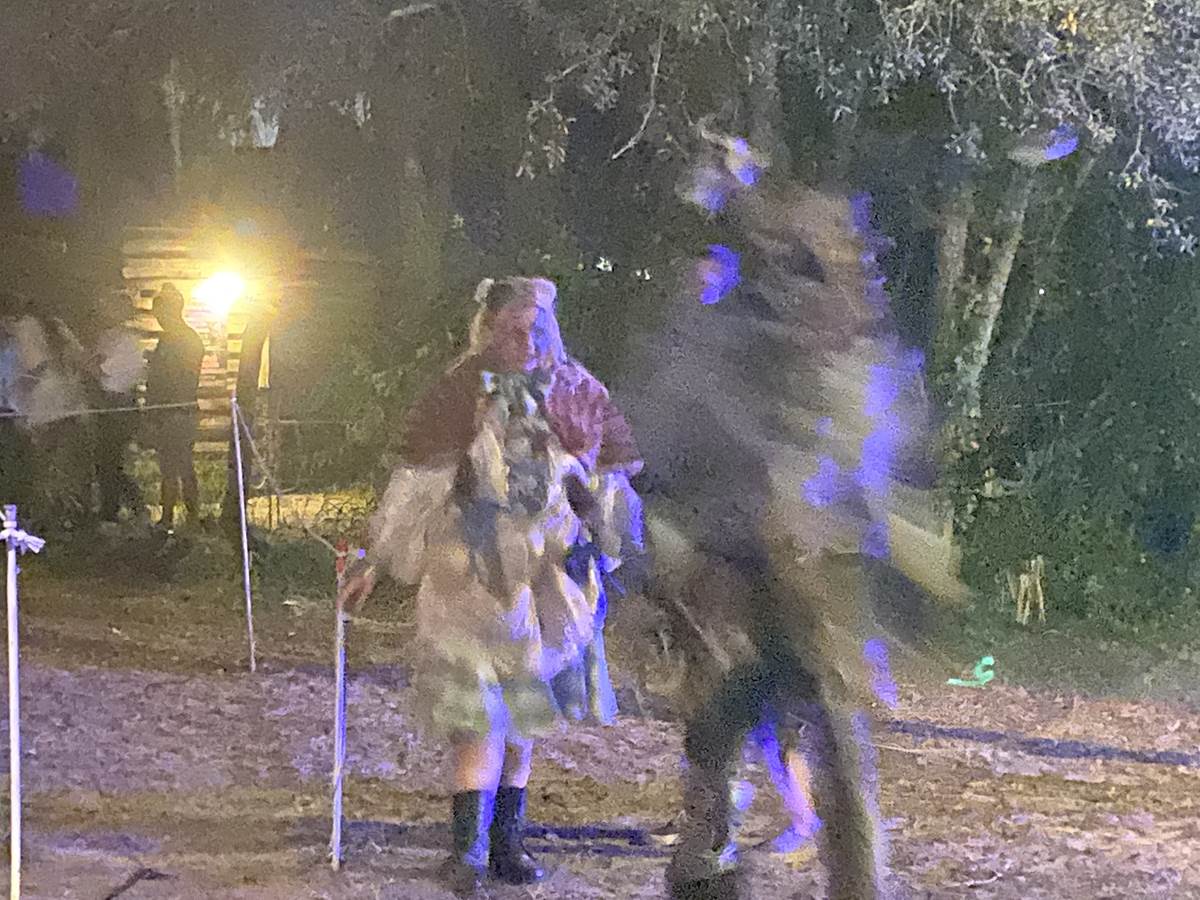 There are various admission tickets to the event, including one that just grants admission to the front yard area. Each offers one trip through each of the trails, which I can honestly say is my only genuine complaint about the event. As someone who loves the craft of creating a haunt and is spoiled by the big names where I can continuously go through and look at each immersive environment, that is something I wish I could do here, though it must be noted that they do offer second trips through the trails at a reduced rate.

A Petrified Forest also hosts a unique event, “Total Eclipse”nights, where guests must sign a waiver (a parent must sign for those under 18) to experience the trails in total darkness, and in years past, are given a glow stick that the performers must try and get from guests as they walk through. However, on regular nights, guests are told on the free trolley (from free parking lots nearby) that performers are not allowed to touch guests and vice versa.

Anybody visiting Central Florida for Haunt Season should have A Petrified Forest on their radar and make it a point to see this quaint (in size) haunt that compares to and surpasses some of the best houses and mazes that the big boys on I-4 offer. A Petrified Forest is now running Weds-Saturdays until October 30th, and tickets can be purchased at their official site, here.