National Coming Out Day may be October 11th, but a twist on the coming-out story will debut simultaneously on USA Network and SYFY in Chucky. A continuation of the popular horror film franchise created by Don Mancini, the series follows a teenager struggling with his sexual identity as he rescues a friendly-looking doll from a rummage sale. At the TCA Summer Press Tour, Don and the cast of the series got together to talk about this next chapter of Chucky history, which steps into the future while answering questions about the doll’s past. 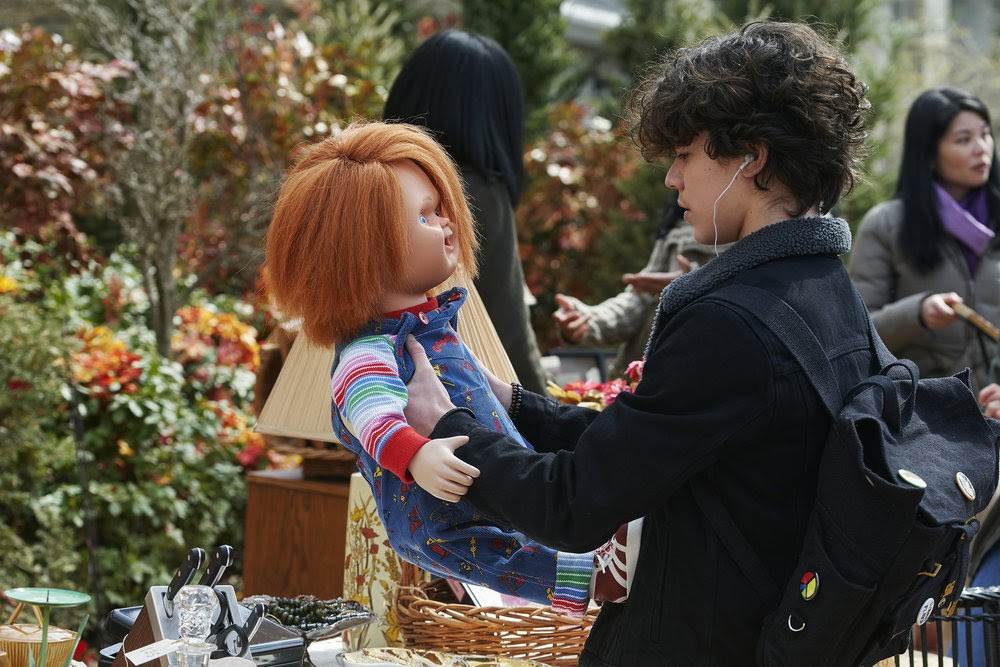 “Exploring Charles Lee Ray's origins has been something that the fans have wanted to see and have been asking for literally for decades now,” Don Mancini explained. “One of the reasons I was excited about taking the franchise into the medium of television was because having so much storytelling real estate, eight hours of Chucky, that provided such a great opportunity for exploring that stuff, among other stuff.” In addition, the creator shared that he didn’t have to compromise at all on the gore and language in the show, even though the medium has changed.

The lead character is Jake Webber, played by Zackary Arthur. “My parents didn't want me watching gory stuff when I was younger,” the actor explained, who is 14-years-old like the character he plays. “I remember back in elementary school, the kids who watched the Chucky movies, they were the cool kids.  And I was like, ‘Man, I wish I was like that.’” While those other kids watched the Chucky movies, Zackary now gets to be in the Chucky series.

Playing Jake’s dad Logan is Devon Sawa, who became a teen heartthrob in the 2000s thanks in part to his work in horror films. “I have grown up with Chucky,” the actor said. “When it came across my desk to audition for it, it was a no-brainer. I jumped at it. Chucky is a legend, Brad is a legend. Chucky belongs on the Mount Rushmore of horror with, you know, Krueger and Jason. So, I mean, I'm just trying not to smile so big, because I just was so excited to be a part of this and put this on the list of cool things I've done. I don't know what more I could say. I'm thrilled.”

Jennifer Tilly is an LGBTQ+ icon who joined the Chucky franchise in 1998 as the voice of Tiffany Valentine, a role she reprises in the series. Her work on the project started a little later, but she recalls creator Don Mancini calling her to talk about a special moment on set between Zackary’s character Jake and Bjorgvin Arnarson’s character Devon.

as Devon Lopez “He was like, ‘Wow, this kid is really good. He's such a good actor.’ And there is a scene where Zackary and Bjorgvin kiss. They have a moment of human connection and everybody on the set was weeping because it was so touching, Don included. He was just so happy to see this character that he came out with so brilliantly incarnated by Zackary.”

Brad Dourif, who originated the voice of Chucky back in 1988 in the first Child’s Play film, the role continues to be challenging.  “My voice is changing,” the 71-year-old actor revealed. “I have to constantly adjust for how my voice is. Originally, Chucky was from Chicago, and so I had a Chicago rasp and so forth. Now, he's, oddly, kind of moving more toward New Jersey; I wonder why? And, so, his accent is a little bit more New Jersey.”

You can experience this new chapter in Chucky history beginning Tuesday, October 12th, at 10/9 c on your choice of network: USA or SYFY.