It’s the penultimate episode of Only Murders in the Building, titled “Double Time.” The title is a brilliant one as it refers to a few things happening here. In music, it means a rhythm that is twice as fast as a previous one. Interpersonally, it also means to deceive someone or be unfaithful. On that note, we dive into a detailed recap of “Double Time.” 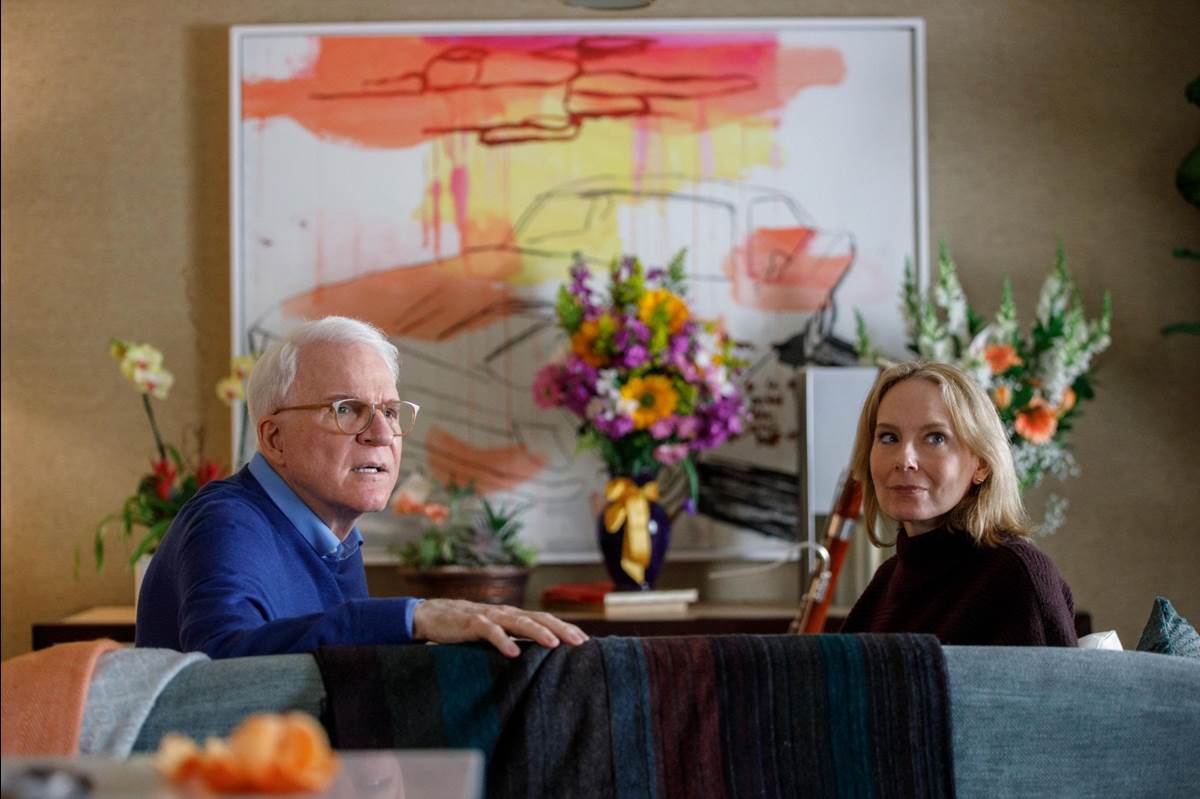 Jan (Amy Ryan) takes over as the narrator of the penultimate episode. As she delivers a monologue about how winter and cold weather are bad for a bassoon, we see that she has survived her attack. Charles (Steve Martin) has brought her to his apartment to look after her, decorating the place with “Get Well” balloons and serving her tea. He even helps her clean her bassoon, although he cautions that she should not rush to get back to work as she winces every time she laughs or moves.

We learn that Jan didn’t see who attacked her and Charles is down about how the last podcast episode claimed Teddy and Theo Dimas as the murderers, which turned out to not be true. Jan has a copy of “Daily Dispatch” which reads “Shame on Rye! Lox ‘Em Up!,” the additional text revealing that Dimas and son are in trouble for their grave robbing jewelry business. But more than anything, Charles is mad that Jan could’ve been killed as a result of the podcast and decides he should leave the show. Jan encourages him not to, but he tells her that she means more to him than Oliver and Mabel. As Charles moves to answer his ringing phone, he suggests that he take Jan away on a trip. The call is from Charle’s old Brazzos stunt double, Sazz Pataky (Jane Lynch), who stopped by to see him and is on her way up.

Mabel (Selena Gomez) adds another window to the mural or Arconia residents she’s been creating in her aunt’s apartment, this one featuring Teddy and Theo. As she paints, she listens to a correction about the podcast that Oliver (Martin Short) recorded, retracting their statement that Teddy and Theo murdered Tim Kono. A letter slides under the door that informs Mabel that a building meeting has been called this afternoon to discuss “This murder and podcast nonsense.” Oscar (Aaron Dominguez) comes out of the bathroom as he buttons up a shirt, telling Mabel that he’s happy that the Dimas’ were exposed if nothing else. Mabel is surprised that he shaved his mustache and he shares that his dad got him an appointment with a lawyer who can help clear his name. As Sazz meets Jan, she brags about some of the scars she received while filming Brazzos and hints to Charles that with the success of his podcast, someone like Quentin Tarantino might come for the film rights and she is ready to play his stunt double again. While Sazz takes a call from her agent, Charles confesses to Jan that he always felt second to Sazz on set, who could do everything better than him and even stole his ex-girlfriend Cookie from him. When a knock comes to the door Jan opens it to find Mabel and Oscar, who asks how she’s doing as they enter. They both mistake Sazz for Charles and are scared by it. Oliver, who just found out he’s been evicted, is the next to arrive with a cart full of stuff in the hopes that he can stay with Charles for the time being. Like Mabel, Oliver confuses Sazz for Charles at first, thinking he’s had too much work done.

The trio revisits their suspect board and documents with Jan, Sazz and Oscar in the room. Sazz offers some suggestions that Mabel and Oliver willingly accept, which upsets Jan who was told she couldn’t help. Sazz notices two glasses in the garbage bag and sniffs them, suggesting that it was bourbon and that one of them likely has traces of poison in it. She refers to Tim’s murder as “A crime of passion,” suggesting that Charles wouldn’t know anything about that.

At The Arconia meeting in the lobby, the gang sees Howard (Michael Cyril Creighton), who was Jan’s suggested leading suspect. There are police officers present as Bunny (Jayne Houdyshell) calls the meeting to order, announcing that Tim Kono’s death has been declared a homicide and that somebody in the building did it. But she is far more concerned about the podcast, which she says has violated the privacy of the building’s residents. Oliver stands to defend himself, wearing a tie-dyed hoodie with the podcast’s logo on it and offering to sell them to anyone for $49.99. Bunny announces that she already had enough complaints to evict Oliver and that she only needs 8 to do the same to Charles and Mabel. Charles tries to save himself by announcing that he’s done with the podcast, but Bunny says it’s too late. Howard is the only resident who speaks in defense of the podcast hosts, saying that because of them, he had a toxicology report done on his deceased cat Evelyn and found that she, too, was poisoned. He also mentions the missing leg, thinking the killer snuck into his apartment and tried to steal the body. Bunny threatens Howard, saying that she’s had 6 complaints about the odors from his apartment, which coerces him into voting for the eviction of Charles and Mabel.

As the group heads toward an elevator, Oscar decides there’s too much tension and heads out to run errands. On their way up, Charles says that he’s still upset about the way they dismissed Jan’s ideas and still wants to be done with the podcast, going as far as telling Oliver that it’s “Splash 2.” He wants all of Oliver’s stuff out of his place.

Charles enters his apartment to find Sazz helping Jan out of her shirt but soon finds that she was helping his girlfriend change her bandage. Jan is upset that Charles thought she would cheat on him, packing her bags to sleep in her own apartment. She says that she’s preparing for a big performance of Stravinsky’s Firebird and that she has a solo. Charles asks if he can come to see her and she asks him not to because she won’t be performing at her best due to the injury. She also suggests that Bunny may be the real killer and that her motives for evicting the podcast hosts are to end the investigation.

That night, Jan practices the bassoon at her window. Oscar sleeps soundly next to Mabel, who is wide awake, Oliver is, too, who is spending the night on her couch. The next morning, Oliver wakes with back pain to find that Oscar is dressed in a suit for his meeting with the lawyer. Oscar kisses Mabel on the forehead as he leaves. Mabel and Oliver start looking at the table of items they collected and reflecting on Sazz’s mention of a “Crime of passion,” Oliver opens the box he found that looked like sex toys. Mabel begins retracing her steps, recalling the night she shared an elevator ride with Oliver, Charles and Tim Kono. She realizes that the straps on the garbage bag Tim carried were blue, but all the bags they pulled from his apartment had orange straps. They realize that they never interviewed Tim Kono’s next-door neighbor.

Charles plates his omelet dinner when Sazz enters his apartment and takes it for herself. She apologizes for upsetting him and reveals that Cookie is now her ex, too, having left her for a man after twenty years together. She tells Charles that Jan is the woman for him and that they both deserve someone like him. She confesses to having never understood his low self-esteem and encourages him to go support his girlfriend by attending her concert. 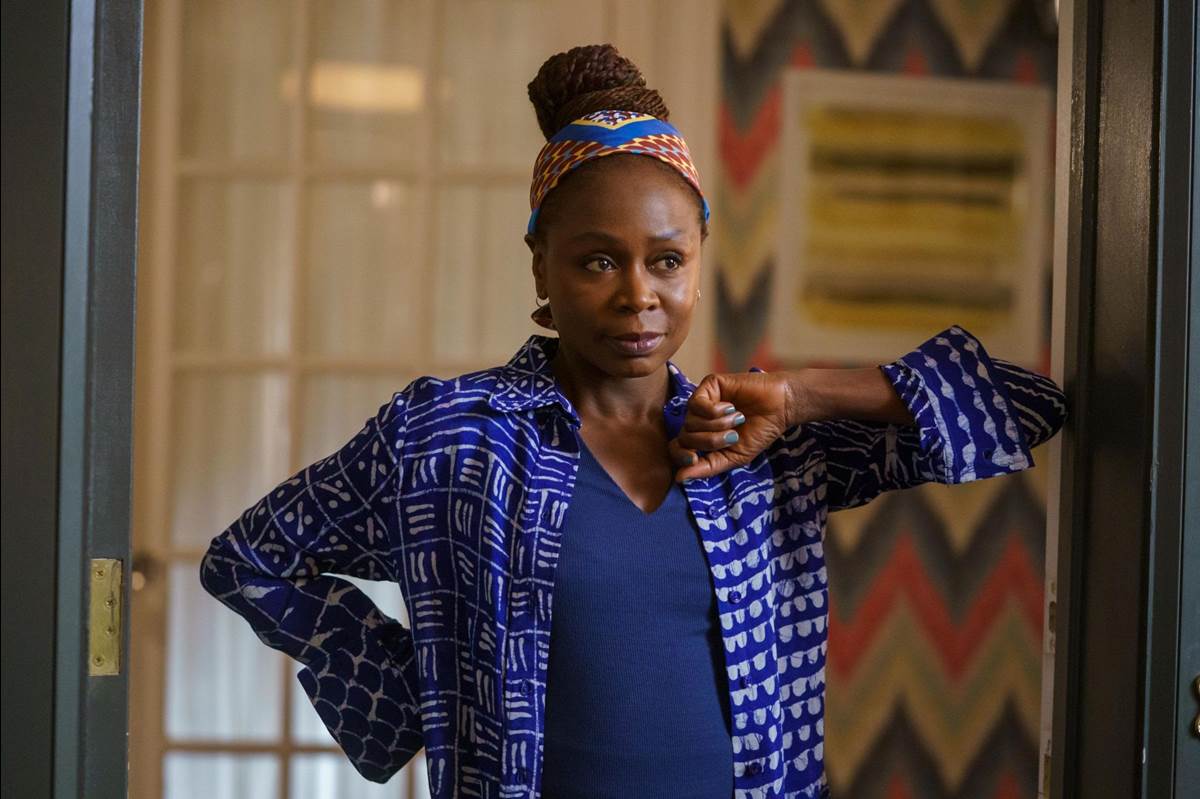 Charles arrives at the symphony and takes his seat next to a young man who is also there to see his girlfriend. The lights dim, the conductor takes her stand and makes mention of the youngest first chair bassoonist in the history of the symphony. A young woman takes the stage, the boy’s girlfriend. Jan sits in her chair looking uncomfortable. 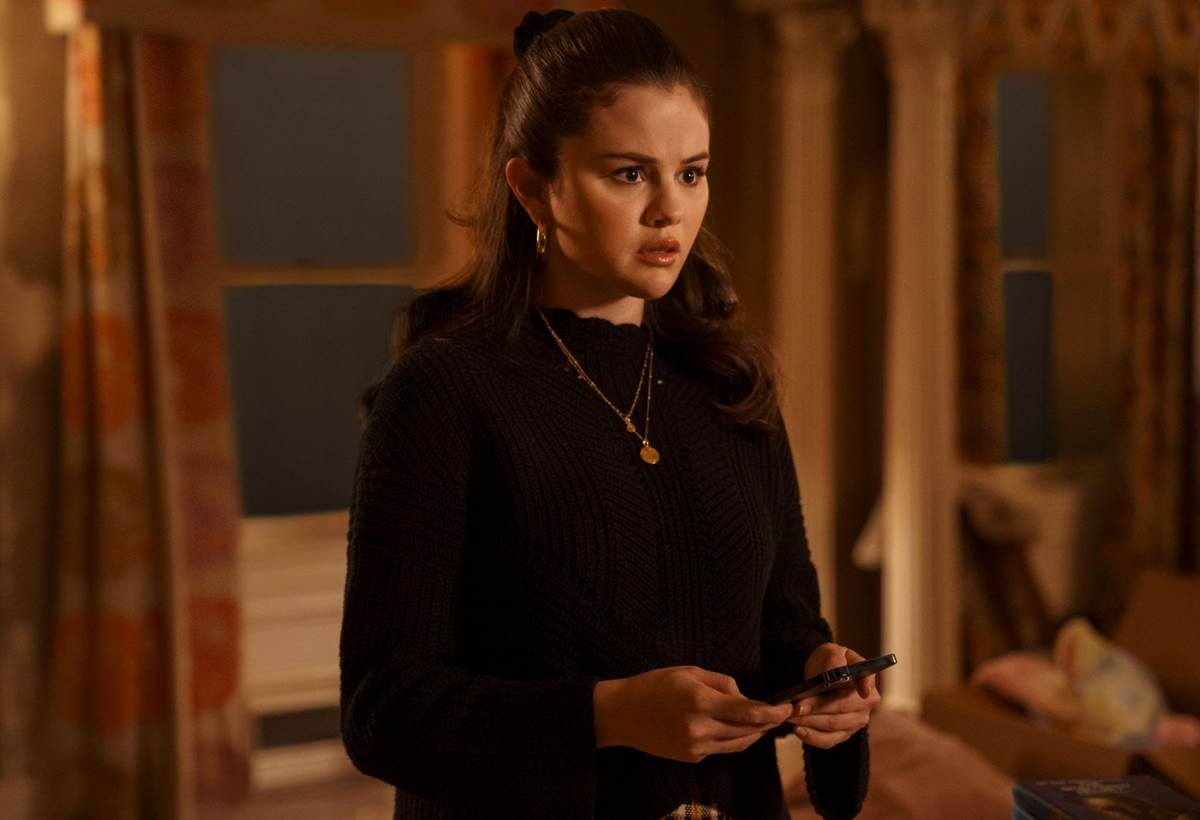 Oliver and Mabel sift through Tim Kono’s items again, confused why they never heard or saw anything about him having a girlfriend. Oliver pulls out a long, elastic device that he believes to be a sex toy and asks Mabel to look up the company that made it: “Exotic instruments.” She discovers that it’s not a sex toy but a device to clean a bassoon. She looks up at Oliver confused and asks why Tim had a bassoon cleaner in his sex toy box.

Charles watches the symphony begin. His nose begins to bleed, something that happens when he’s anxious.

Has Jan been Tim Kono’s murderer all along? We will find out on October 19th in the season finale “Open and Shut” on Hulu.