TV Recap: “Gabby Duran and the Unsittables” – Gabby Has a Time Travel Adventure in “Zeke to the Future”

The Halloween episode of Gabby Duran and the Unsittables already premiered (“Beware the Fright Master!”), but this week’s episode has an extra dose of spooky to go around. Titled “Zeke to the Future,” the episode also plays around with the concept of time travel, the title being a nod to the classic comedy adventure Back to the Future. Here’s a recap of Gabby’s time-traveling adventure. 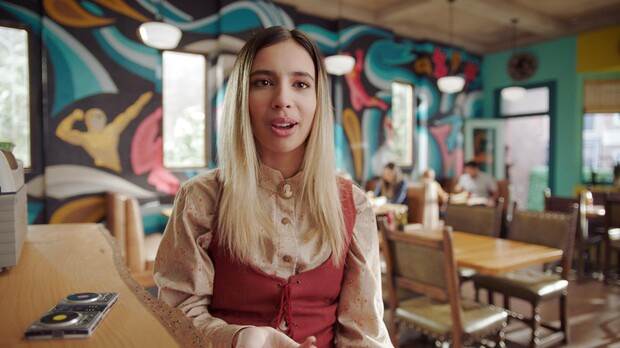 Gabby is standing before her history class giving a report about a week ago at Luchachos when Wes challenged her to eat a cheesy chacho chalupa in just one bite and she did. She made an elaborate diorama as a visual aide and it impressed with herself but Mr. Boyle asks her what that has to do with Havensburg history. Gabby says it’s an event that took place in Havensburg and since it was a week ago, it’s already history. She asks if she got an A and Mr. Boyle says “Oh, I’ll give you an A, but it will have an F before it and an I-L after.” After class, Gabby asks if there’s anything she can do to get a passing grade on the project.

The agreement Gabby made with Mr. Boyle is that she would volunteer at the historic home of Ezekial Burg, dressing in period attire and giving tours of the family home. The intention is that she will learn a lot about the local history and then be able to give a better presentation. The home is famous for the mysterious disappearance of Ezekial Burg Jr., the founder’s son. Between tours, Gabby looks around for something to accessorize her look with, opening a wardrobe and seeing light shine through a door in the back.

Gabby emerges on the other side into a basement with some surprisingly high-tech devices, including a chamber with a lever. Gabby lifts the lever and the door slides open. A bowl of soup slides out, followed by a boy who coughs before introducing himself as Ezekial Burg Jr. He has no clue that he vanished mysteriously in 1821 and to him just a few moments have passed. Ezekiel’s stomach rumbles and Gabby takes him to Luchachos where he also meets Wes. He marvels at the filtered water and enjoys his first taco. Gabby nicknames him Zeke as she asks him to explain how he time traveled.

Zeke recounts how he was on a pheasant hunt one day when he met Tarley, a Sazmorian whose ship crashed to Earth. They became friends and built a secret workroom under Zeke’s house to try and fix Tarley’s spaceship. He refers to aliens as “Star pilgrims.” The cryo-chamber was Zeke’s idea, born out of a love of potage but hatting the waiting period between boiling the plague out of it and getting to eat. The device was supposed to quickly cool down the soup, but something went wrong and he ended up 200 years in the future.

While Zeke was telling his story, Gabby tried to take a selfie of her with him and he freaked out. He believes that having your picture taken is the equivalent of having your soul stolen and he asks Gabby to destroy the photo. She deletes it and offers to help Zeke get back to the past.

Gabby brings Rooney, the only Sazmorian she babysits, to the basement of Zeke’s house to see if sending Zeke back is possible. Rooney reveals that she is Tarley’s great-great-grandchild. Using some of Zeke’s clothes, which were made in 1821, Rooney will be able to calibrate a portal to the moment Zeke disappeared, but it won’t be ready for a few hours.

While Rooney and Wes create a portal to the past, Gabby takes Zeke to get new clothes, including a bling dollar sign necklace, and back to Luchachos for more tacos and water. Gabby admits that she has enjoyed learning about Zeke’s time from him. She gets an alert that the portal is ready and they head back to the basement.

Staring at the green glowing portal, Zeke has a change of heart. Gabby is frustrated and tries to push him towards it but he doesn’t want to leave a world of filtered water and tacos. Rooney announces that the portal will close in a moment and while Gabby tries to plead with Zeke, he ends up telling her that if she loves the past so much, she can go. He pushes her in.

Gabby lands in the mud, still in her period clothes from giving tours of Zeke’s house, and a goat herder takes her for a peasant. When she asks for directions to Ezekial Burg’s house, the man suspects that Gabby wants to rob it. She tells him she’s a traveling gum salesperson and offers him a piece. He becomes obsessed and gladly points Gabby in the right direction in exchange for more gum.

Gabby races to the basement to find Zeke holding his pottage about to enter the chamber. She tells him if he goes in, he will be zapped to the future expecting him to not want to go. Instead, he is excited to see the future and still wants to go in. Gabby grabs his ankles to try and stop him from getting in. When her phone falls out of her pocket, she gets an idea and takes a photo of him. Just like the other Zeke that’s currently in the present, Zeke in the past freaks out because he believes his soul was just stolen. Gabby threatens to keep it forever if he doesn’t let her go into the chamber. She also tells him she’s a future witch and she will know if he tells anyone about this. Gabby gets in the chamber.

While this happened, in the present, Rooney and Wes were furious at Zeke for pushing Gabby through the portal. They were ready to fight him, but Zeke grabbed a Galactian Energy Sceptre and threatened them with it. However, Zeke suddenly disappears in a flash and Wes realizes what this means. He runs to the chamber, puls the lever and out walks Gabby.

Back in history, Gabby finishes her new report, talking about how history is the worst but it gives you a better appreciation for how great the present is. Her new diorama features soup with the plague in it. Mr. Boyle gives Gabby a C- and she seems satisfied with her new grade. Unbeknownst to everyone in the classroom, just outside a green beam of light expands and a chicken is teleported into the present. In the past, we see Zeke and Tarley working on a portal that will take Zeke back to the future. He vows to find Gabby and reclaim his soul when Tarley figures out how to generate enough power to send a human forward in time.

While all of this was happening, Gabby’s sister Olivia discovered that she needs to pace herself with her ambitions. While practicing karate, German, violin and polishing teacups, Olivia got a text from Jeremy, who just wanted her to slide a beverage within arms reach of his “Trashcuzzi,” which is a jacuzzi filled with garbage. He says it calms him down and he wants Olivia to try it, but she refuses, getting angry and going back home. But while practicing more tasks, she gets stressed and is about to step in her garbage can when her mom walks in and questions her behavior. Olivia lies and says it’s a charity to recycle for kids in need and Dina loves it so much she wants to do a news story about it. She wants more trash for the camera to see and Olivia says she will get more, sneaking back into Jeremy’s house to steal from his trashcuzzi. But he catches her and Swift realizes what is going on, bringing Olivia home where she tells her mom that she needs to drop a few activities to have more balance in her life.

Disney Channel has another episode of Gabby Duran and the Unsittables coming up on Friday, October 22nd. Titled “Adventures in Alien House-Sitting,” here’s what fans can look forward to next week.

Gabby gets FOMO while babysitting an alien smart home, but when she uses the cool alien tech to lure a party to the house, the situation goes dangerously interstellar.