Touchstone and Beyond: A History of Disney’s “Spy Hard”

James Bond has returned to the big screen for his last outing with Daniel Craig in the lead, and in honor of this event, we look back at Hollywood Pictures’ 1996 spoof of the genre Spy Hard. Nobody does hilarity like Leslie Nielsen. 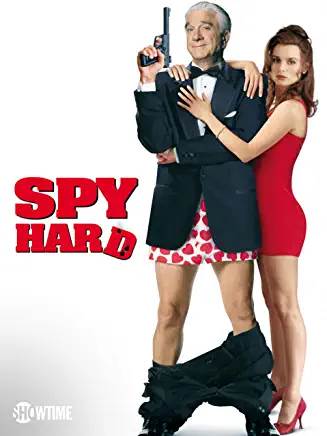 Dick Steele, Agent WD-40, is called out of retirement to vanquish his old nemesis, General Rancor. Partnered with Agent 3.14, Veronique Ukrinsky, Steele learns about Rancor’s plot to destroy the world with a microchip that Veronique’s father created.

Pursued by Rancor, Steele manages to infiltrate his remote base and saving the world and stopping General Rancor once and for all.

Leslie Nielson is hilarious. His work in Spy Hard is on par with the silliness that he brought to The Naked Gun films, and this send up of spy movies, especially James Bond films is brilliant. Nielsen can add so much comedy to a scene with a raised eyebrow, or a smirk on his face, that it was impossible not to laugh throughout the film.

Austin Powers is a more popular spoof of the Bond films, Spy Hard was on the big screen a year before the world had seen Mike Myers’ landmark role. The fact that Andy Griffith is the villain, only makes Spy Hard even better. There is no one better to play the bad guy in a spy spoof than a beloved television legend like Griffith. Both Nielsen and Griffith looked like they were having a lot of fun on set, and it shows in their performance.

‘Weird Al’ Yankovic singing the title song, couldn’t be more perfect. His parody is not only perfect for the film but is quite entertaining to listen to.

If you aren’t a fan of silly parody films, then you won’t enjoy Spy Hard.

Critical response to the film in 1996 focused on the script and direction as lacking. They praised Nielson but many critics commented on how Spy Hard wasn’t on the level of genius like The Naked Gun or Airplane. To me there is nothing terrible about the movie. It’s funny, not crude like many other films, and you won’t be embarrassed if your children watch the movie with you.

I have updated our Golden Popcorn Bucket Award to the Streamy Award. We have four different categories of where a film falls in the streaming order.

Spy Hard is funny, but it only gets a level 1 ‘Streamy Award’. Watch it on your phone while you are waiting in the dentist office. The laughs will kill the time but turn it off once you leave.

Next week we get into the spirit of Halloween with 1994’s alien invasion fright fest, The Puppet Masters. Can Donald Sutherland save the planet and his family from an alien invasion? I sure hope so.