Deep in the heart of 42nd Street where theater performers play, you’ll find Winnie the Pooh, a new stage musical from Jonathan Rockefeller in association with Disney Theatrical. Premiering Off-Broadway at Theater Row, I had the pleasure of attending the first public performance of the 1-hour show. Capturing the charm and whimsy of A. A. Milne’s timeless stories and Disney’s memorable animated adaptations, the show is a mix of familiar hallmarks from the Hundred Acre Wood and fresh and new elements that make this journey feel special. 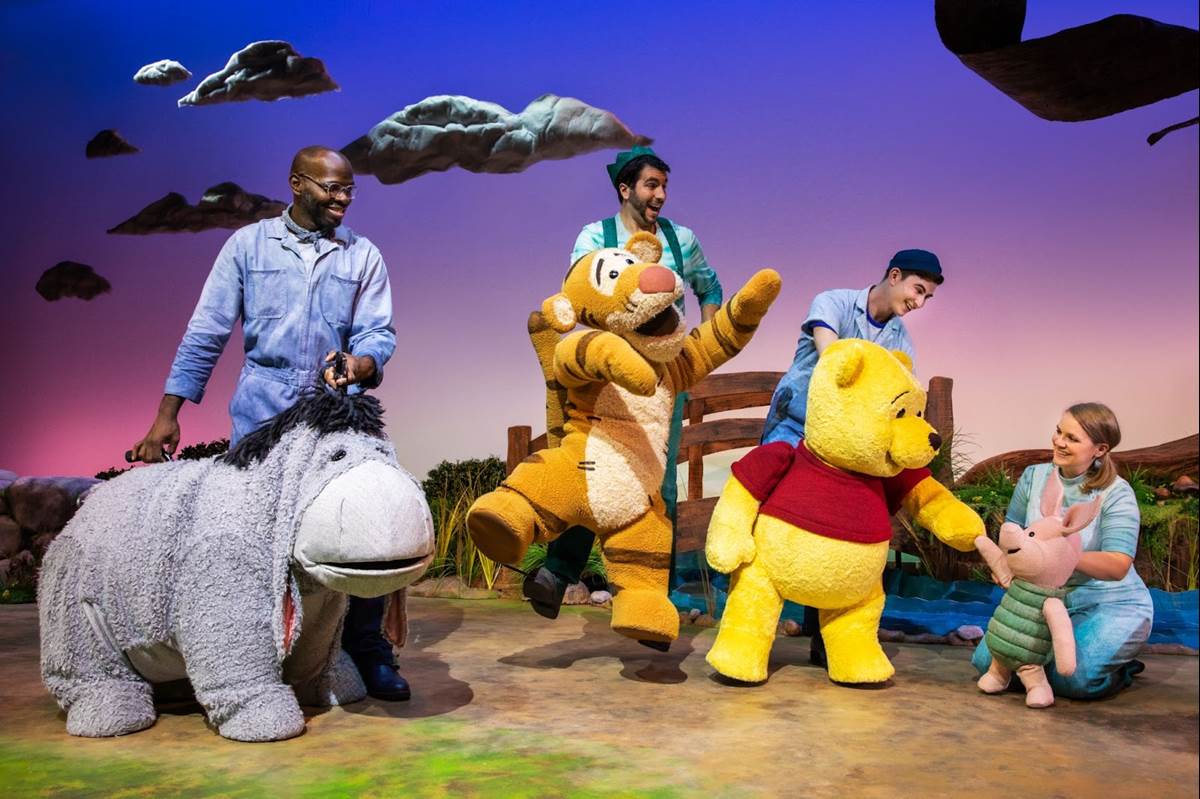 Similar to puppeteered characters in other Disney Theatrical shows (Timon in The Lion King or Olaf in Frozen), the performers mostly stand behind their characters. In the case of Winnie the Pooh and Tigger, played by Jake Bazel and Chris Palmieri, the character’s feet are attached to the actors’ feet, making every aspect of the characters come to life through their body movements. The rest of the performers take on various roles, including Piglet and Roo performed by Kristy Moon, Eeyore, Rabbit and Owl by Emmanuel Elpenord, and Kanga and Owl’s wings by Kristina Dizon. The entire ensemble also helps bring about the change of seasons, with the exception of Jake Bazel because Winnie the Pooh is on stage for the entire hour.

The story unfolds over the span of four seasons, beginning with fall and ending with summer. Christopher Robin has gone away to school, leaving Winnie the Pooh and his friends in the Hundred Acre Wood to fend for themselves until his return. Naturally, Pooh is craving a “Smackerel” of honey and in each season, he finds new challenges that prevent him from obtaining something sweet. But when Christopher Robin finally comes home for summer break, the sweetest treat of all isn’t honey, but friendship.

With the character of Winnie the Pooh celebrating 100 years in 2021, Jonathan Rockefeller has pulled together elements unique to the books and Disney’s animated projects to please all fans of Pooh Bear young and young at heart. Like the books and package feature The Many Adventures of Winnie the Pooh, each season is episodic. The main throughline of the story is Pooh’s need for honey and his desire to reunite with Christopher Robin, but the hallmarks of the franchise are all there. Eeyore’s house of sticks will collapse, Tigger will bounce and find that he does everything best, Rabbit will garden and get frustrated that nobody else does it right, and Piglet will be small and meek but braver than he thinks. 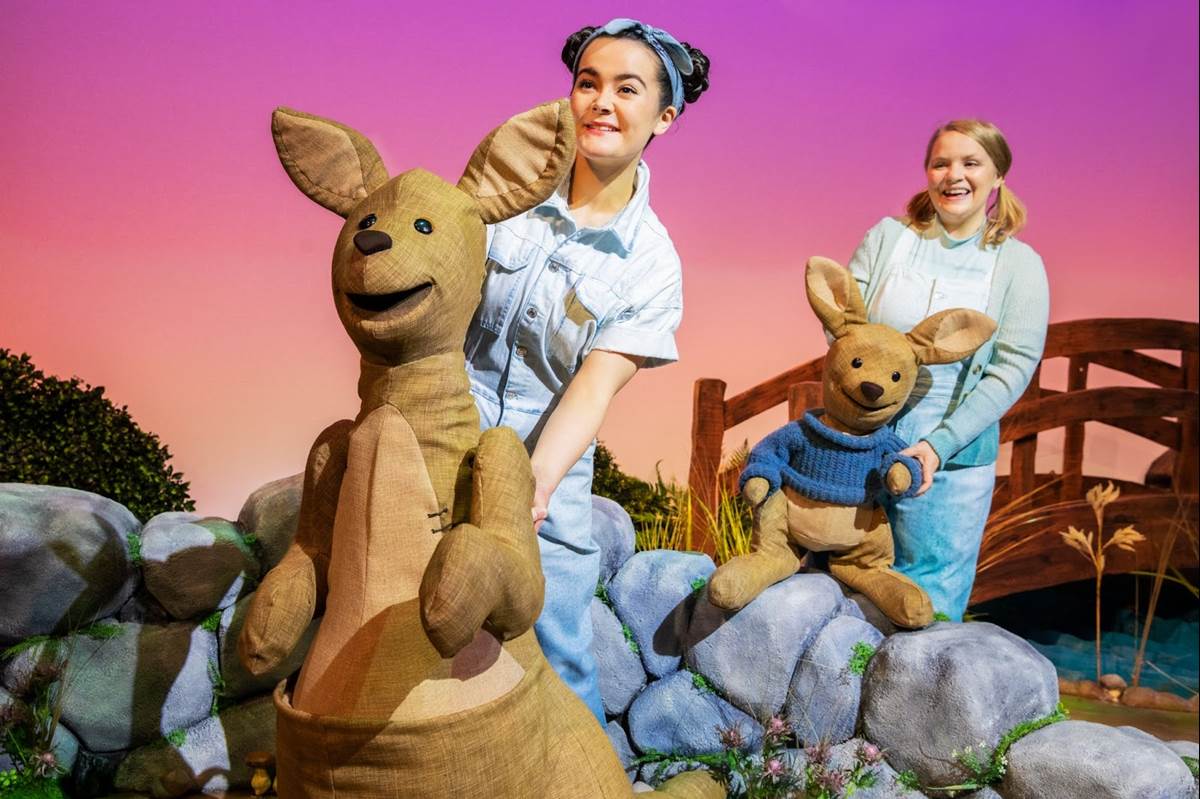 It’s hard to separate Winnie the Pooh from the Sherman Brothers music and Jonathan Rockefeller has incorporated as much of it into the story as possible. The show not only brings in most of the songs from the original featurettes, but also The Tigger Movie. Moving into the expanded projects, Carly Simon’s “The More It Snows (Tiddley Pom)” from Piglet’s Big Movie helps set the transition to winter. The score also incorporates Steven Nelson’s theme song from The New Adventures of Winnie the Pooh, although the lyrics are never sung.

Aimed at a younger audience, Winnie the Pooh is short enough in length to make it easy for kids to sit through. Unlike The Lion King or some of the family-friendly options playing on Broadway, there aren’t any moments where a character strops to sing a slow “I Want” song for several minutes, nor is the plot hard to follow. You’d be hard-pressed as a parent to find a more perfect way to introduce a child to live theater than Winnie the Pooh. Kids will also delight in some of the magical effects in the show, including falling leaves blowing into the audience, snowflakes twinkling overhead, and a message Christopher Robin leaves for Pooh that blows of your heads. But that’s also not to say that adults with a soft spot in their heart for Winnie the Pooh won’t be equally enthralled.

All of the performers are masters of their craft as not only actors but also puppeteers. If a character is on stage, they always feel alive, never becoming the inanimate puppets they otherwise are. Even adults will find themselves getting lost in the performances, sometimes forgetting that the actor is above the puppet. Jake Bazel does a spot-on Sterling Holloway impersonation for Pooh’s voice, but above that, he truly embodies the spirit of Winnie the Pooh. All of his character choices and line deliveries feel like the “Willy nilly silly old bear.” Probably the most charming and whimsical stage show I’ve ever seen, Winnie the Pooh surpasses every expectation I had for it. Knowing that it was technically children’s theater, I went in expecting something that felt a little pandering as an adult. Instead, Jonathan Rockefeller delivers a stage adaptation with all the heart, warmth and sincerity of the works of A. A. Milne and the adaptation by Walt Disney. Unlike some of the direct-to-video Pooh projects that overcrowded the franchise, everything about the musical stage adaptation of Winnie the Pooh is top quality.

Winnie the Pooh is currently playing in New York City through January 2022. Visit winniethepoohshow.com for more information on future performances.