There’s no shortage of exciting entertainment offerings in New York City, but if you’re a Pixar fan, the must-do attraction is Pixar Putt, a pop-up experience in The Battery. With picturesque views of the Statue of Liberty in the distance, the 18-hole experience offers a dose of Pixar fun from every single feature film franchise created by the studio. From Toy Story to Luca, no Pixar world is absent from this fun experience. The fun begins before you even check in with a Pizza Planet golf cart with a Luxo Ball-themed golf bag parked out front. Ticket prices vary by day and time and must be booked in advance by visiting PixarPutt.com. Themed scorecards are given at check-in when you pick up your putter and balls. Each of the holes offers unique challenges and the experience begins with the most recent Pixar film, Luca. Starting on the Luxo Ball, players have to put their ball through the hilly streets of Porto Rosso, into the ocean and around a sea monster’s tail. 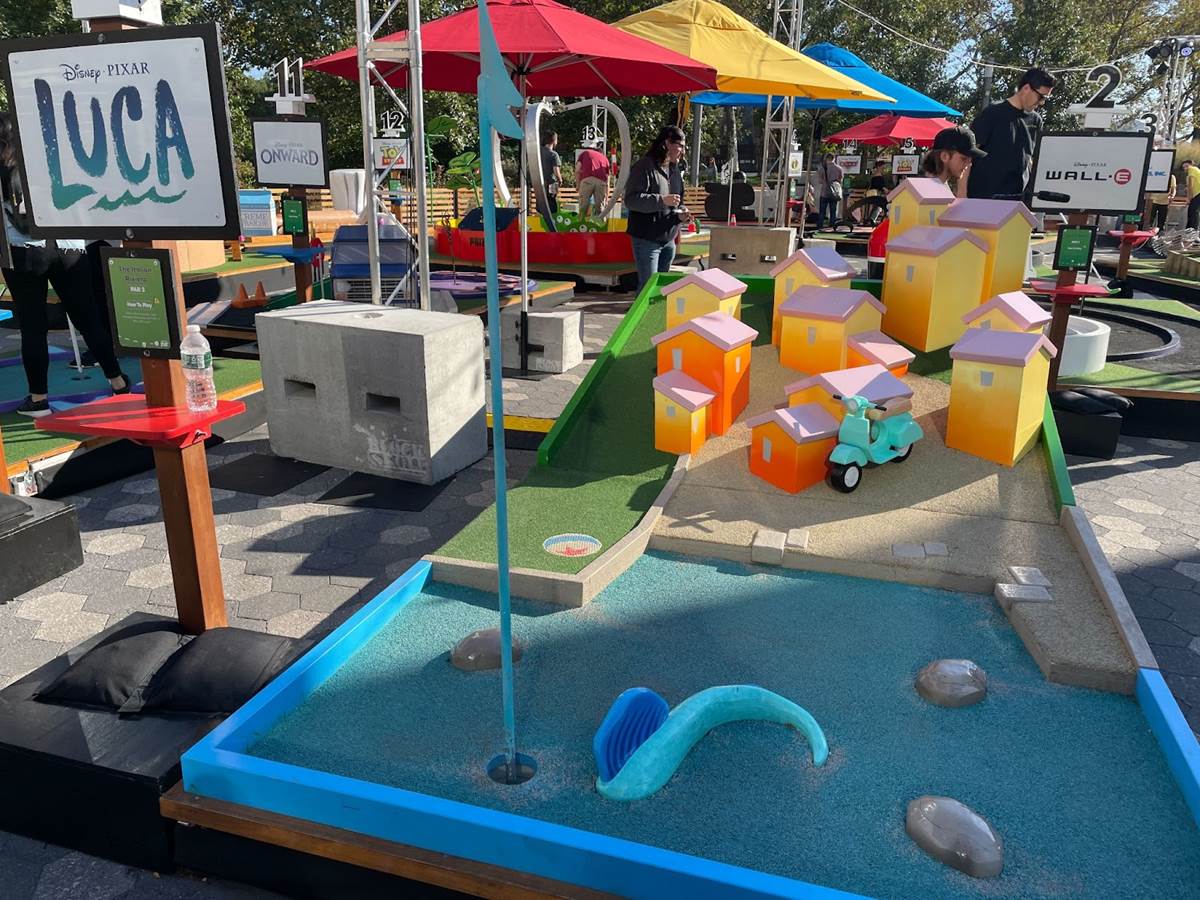 The second hole is inspired by the “Define Dancing” sequence from WALL-E. Players putt their ball through a spiral stream of fire extinguisher dust. A heart above WALL-E’s head is the goal post and if you sail your ball up the elevated Eve, you have a good chance at a hole-in-one down the ramp to WALL-E’s heart. 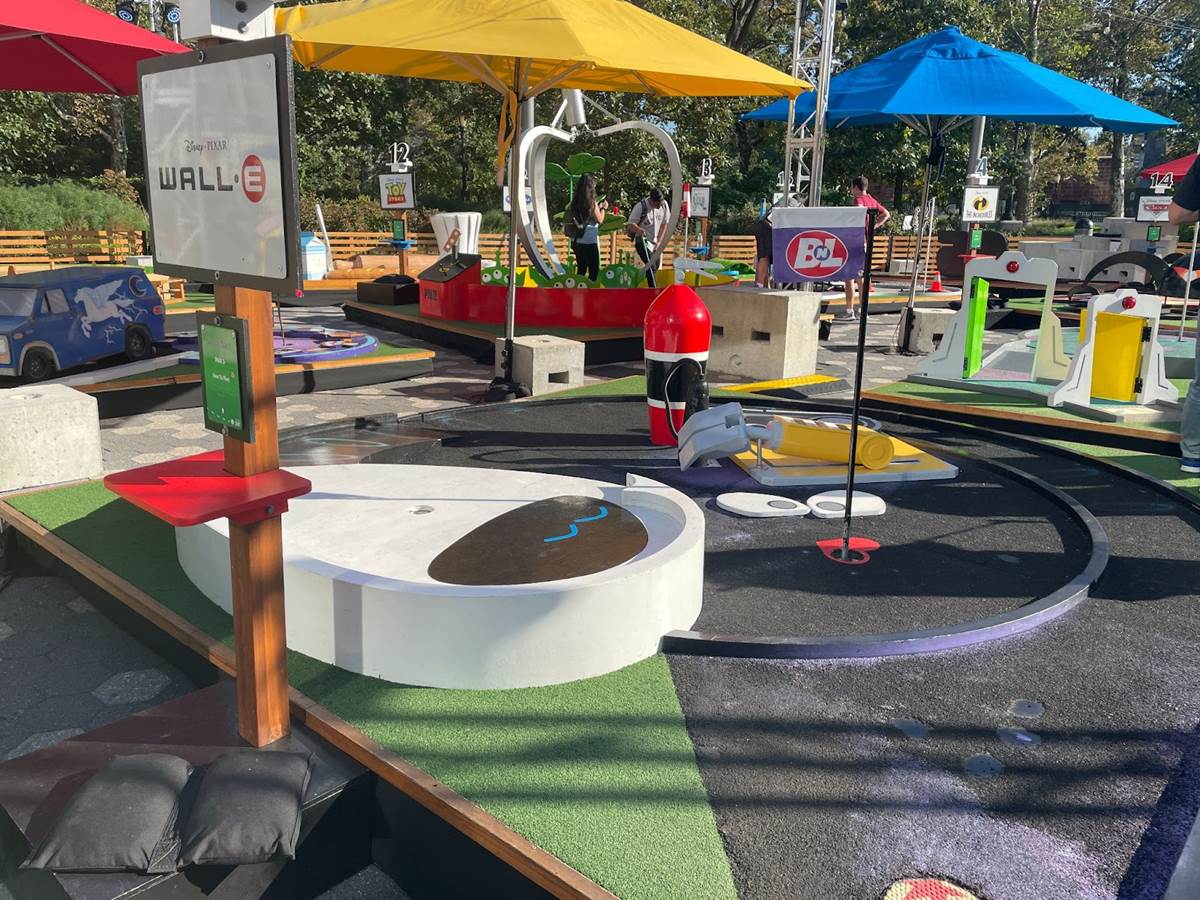 It’s a maze of doors at Monsters, Inc. that creates an obstacle on hole 3, but if you line everything up perfectly, you can ricochet your ball directly into the goal. Hole 4 looks like a job for The Incredibles. Putt up the ramp of the omnidroid and try to land in one of the four holes, but there’s a trick. You can only land in an unoccupied hole, so if another player has already landed in one, you will have to work your ball towards a different one. There are four possible holes on this course. 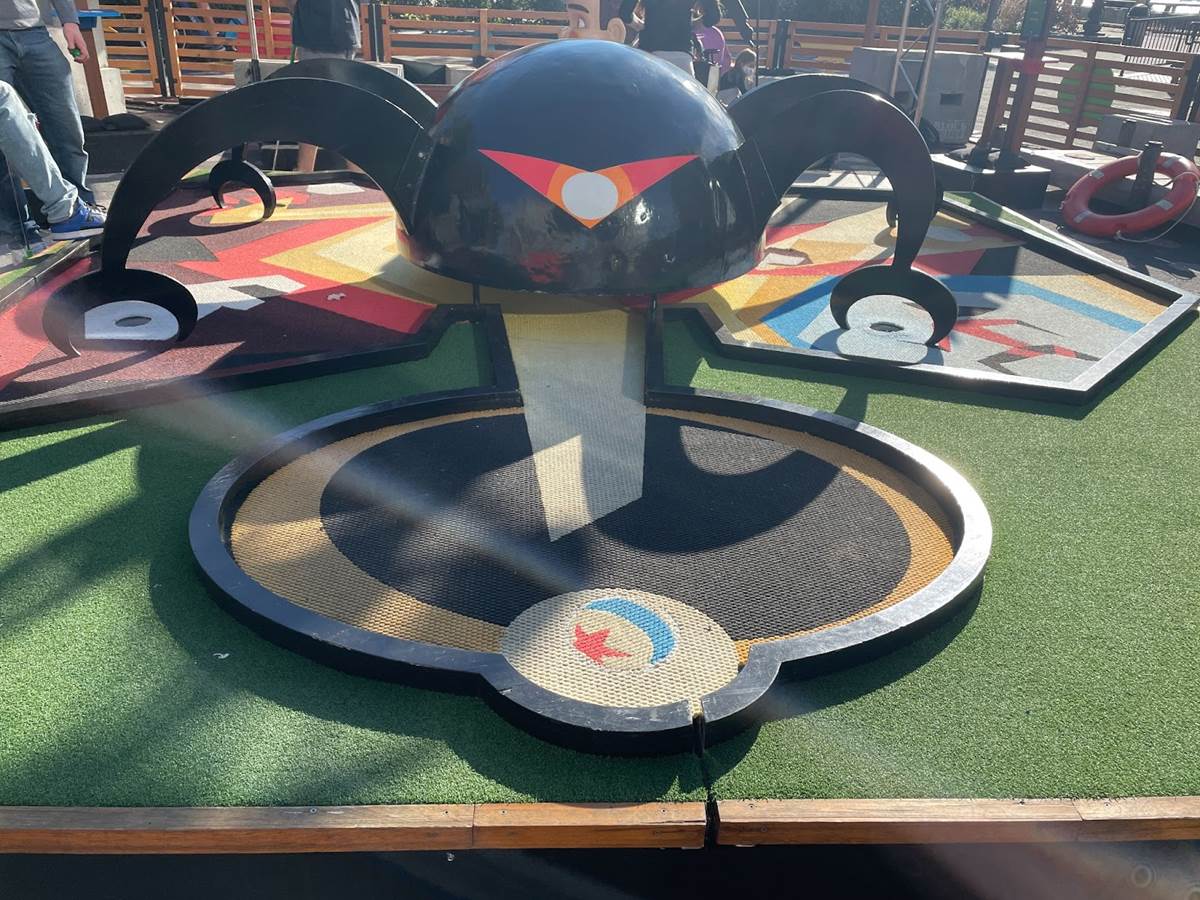 The first of three Toy Story themed holes comes from the antique shop in Toy Story 4 with one of Gabby Gabby’s Bensons blocking the way. His mouth raises and lowers, but if you can sail the ball into his open mouth, you can possibly achieve a hole-in-one. There are two holes on the sides if you’re just trying to get under par, but the shape of the course makes it possible to send the ball back around through the other opening if you’re not careful. By the way, this hole offers one of the best views of Lady Liberty from inside the course, but there are lots of options nearby for a family photo and you can also catch a boat over to Ellis Island right around the corner. 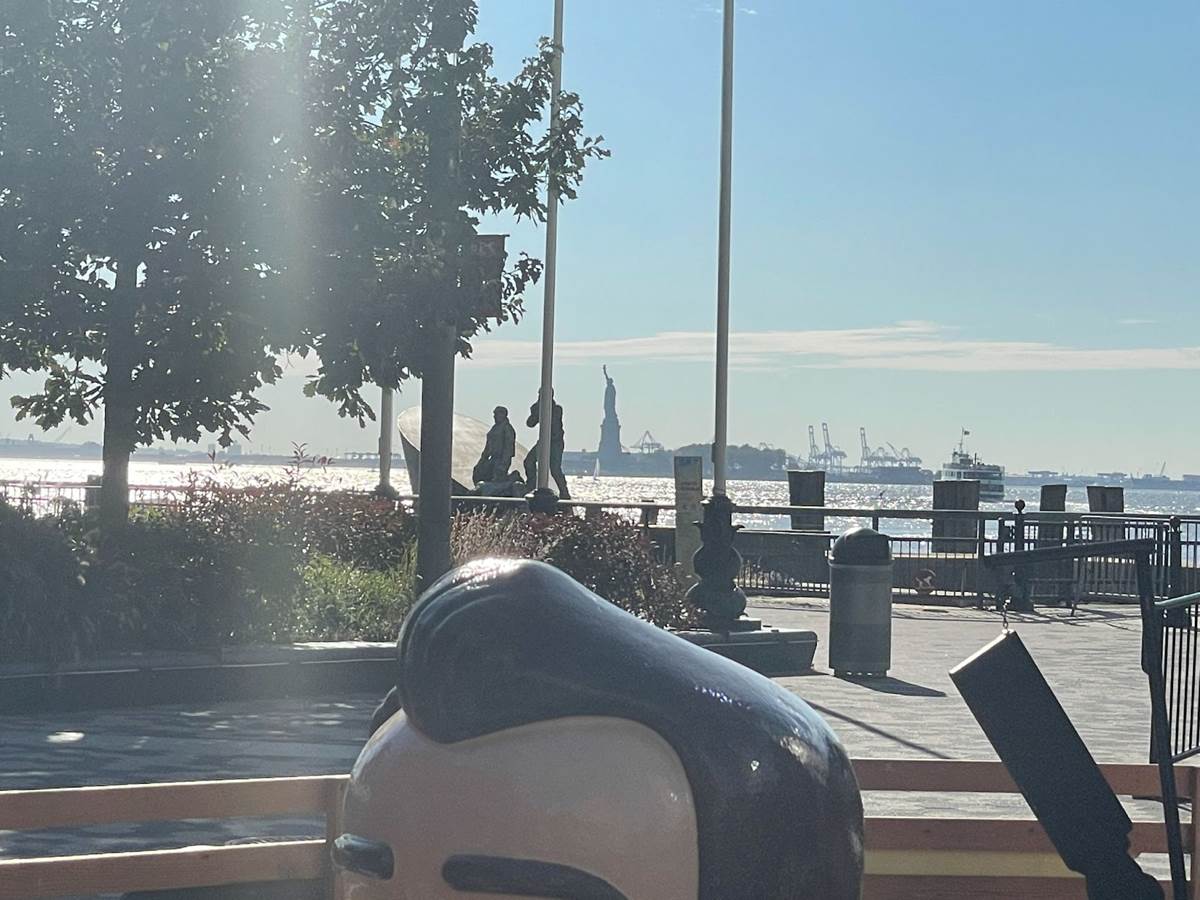 Hole 6 is themed to Finding Nemo, putting down a dock lined with crab catchers. It looks simple enough at first glance, but Nigel awaits at the end of the pier and if your ball veers too far to the left, it can be difficult to get it over to the hole on the right side. 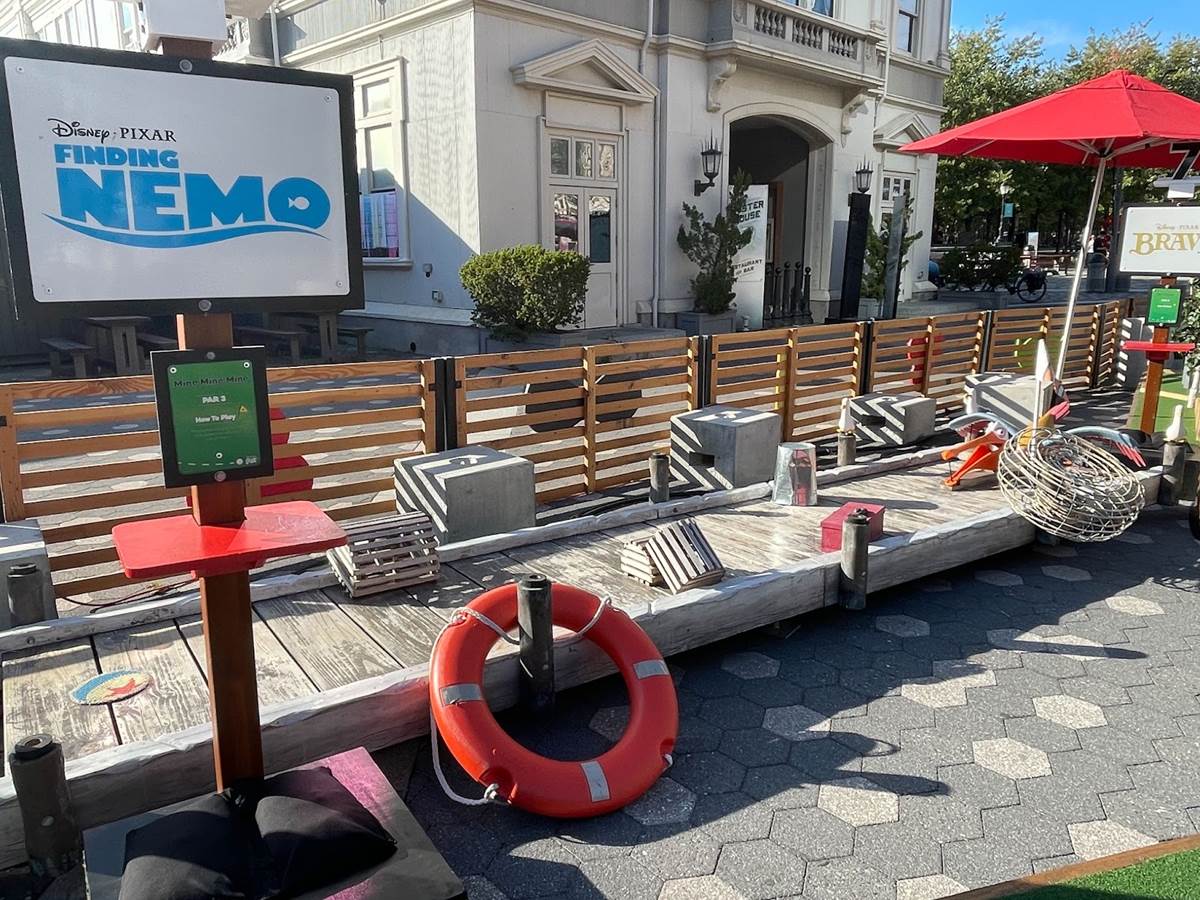 If you’ve been over par so far, hole 7 might be your lucky chance to change your fate on a course themed to Brave. The action begins by sailing your ball into a target (or at least onto its platform). 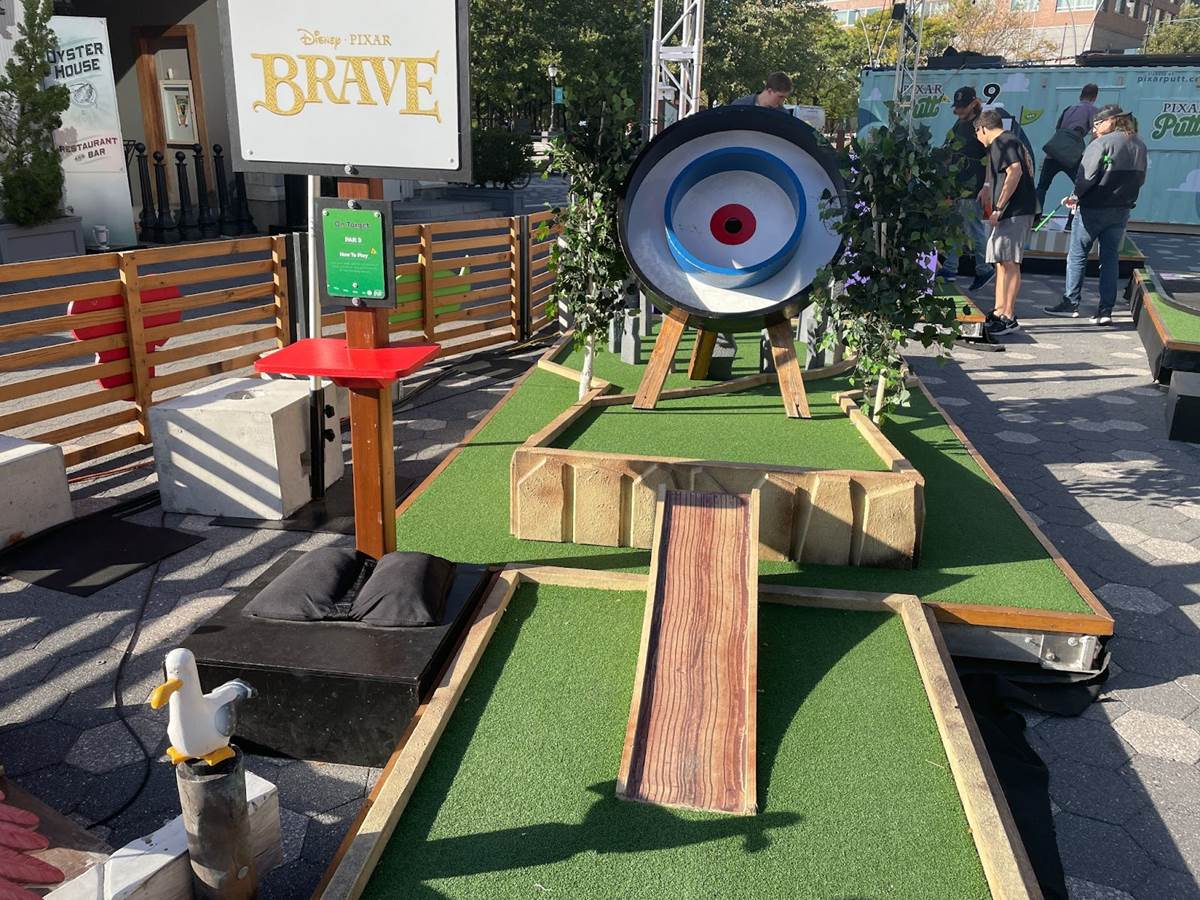 On the other side is a henge circle that surrounds the hole. If you don’t make it through the bullseye, a hole-in-one is nigh impossible on this course, but it’s still a lot of fun. Look out for wisps! Hole 8 takes players inside Riley’s mind and is the first of several holes that change the way the game is played. Rather than putting to start this course off, the top of the memory shelf contains several options to drop your ball down. It’s then up to luck, with a pachinko-style device that determines if it goes down one of two ramps or simply rolls out the bottom of the shelves. Elevated zones inside Riley’s mind create additional obstacles to get to the goal. Hole 9 takes players halfway through the course and might make you “Un Poco Loco” with a course themed to Coco. The course starts on Ernesto de la Cruz’s guitar where you putt your ball down the guitar strings to the other side, from which you can sail your ball over the marigold bridge into the Land of the Dead. 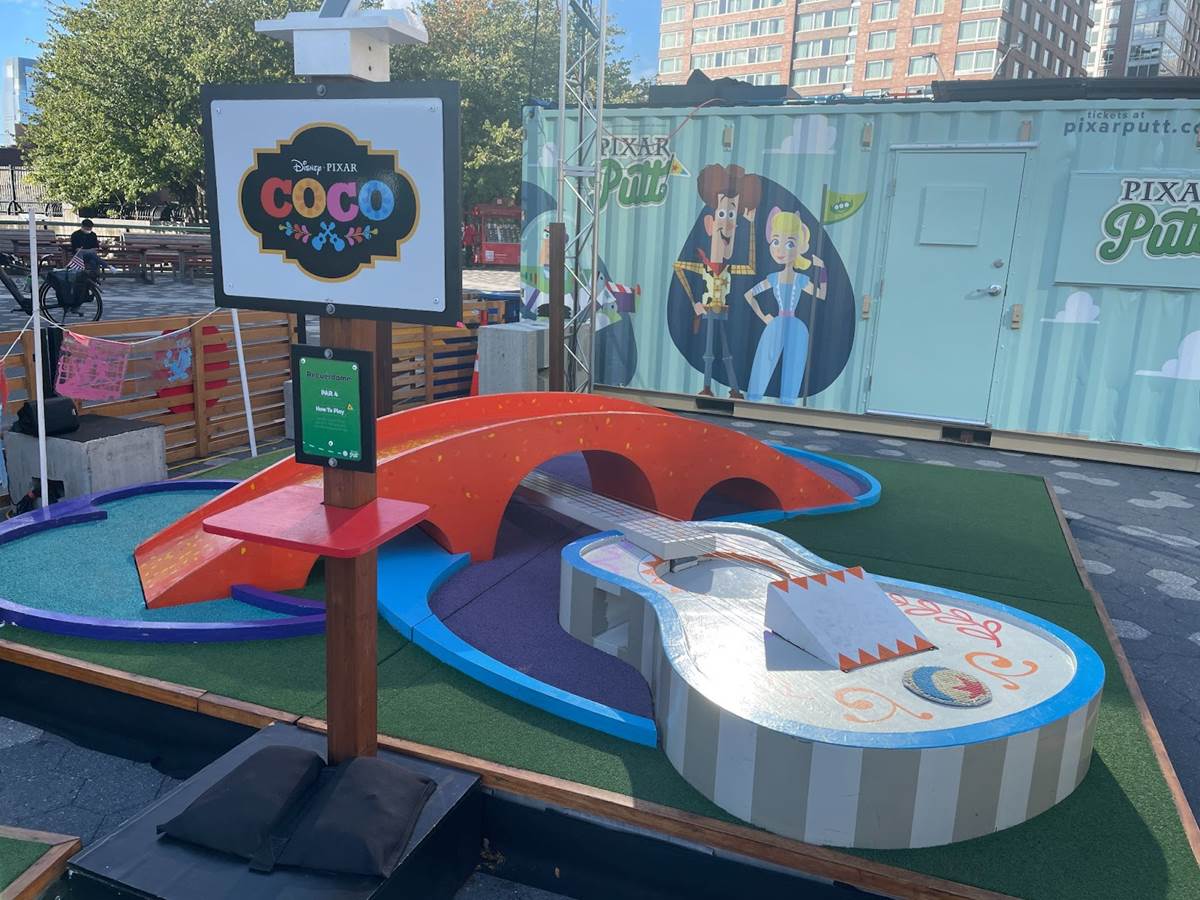 Hole 10 takes you “To infinity and beyond” with the second Toy Story course themed to Buzz Lightyear. Shooting your ball up a ramp down Buzz’s laser blaster, if you line up the shoot just right you can get a hole-in-one. 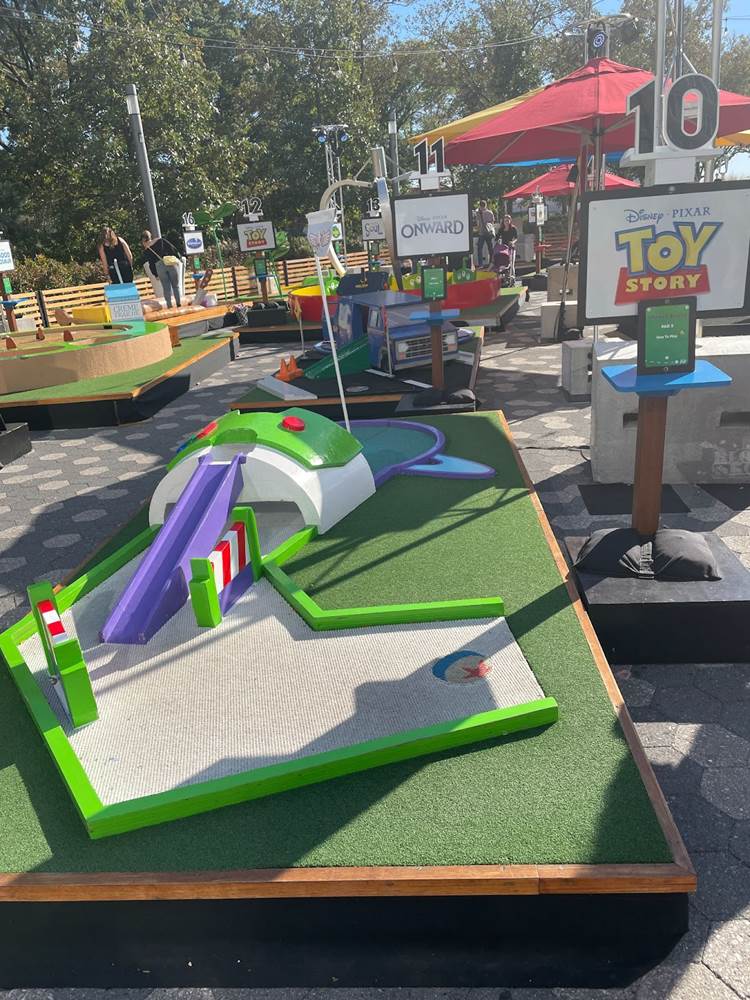 Onward to Hole 11 where your noble steed Guinevere awaits. 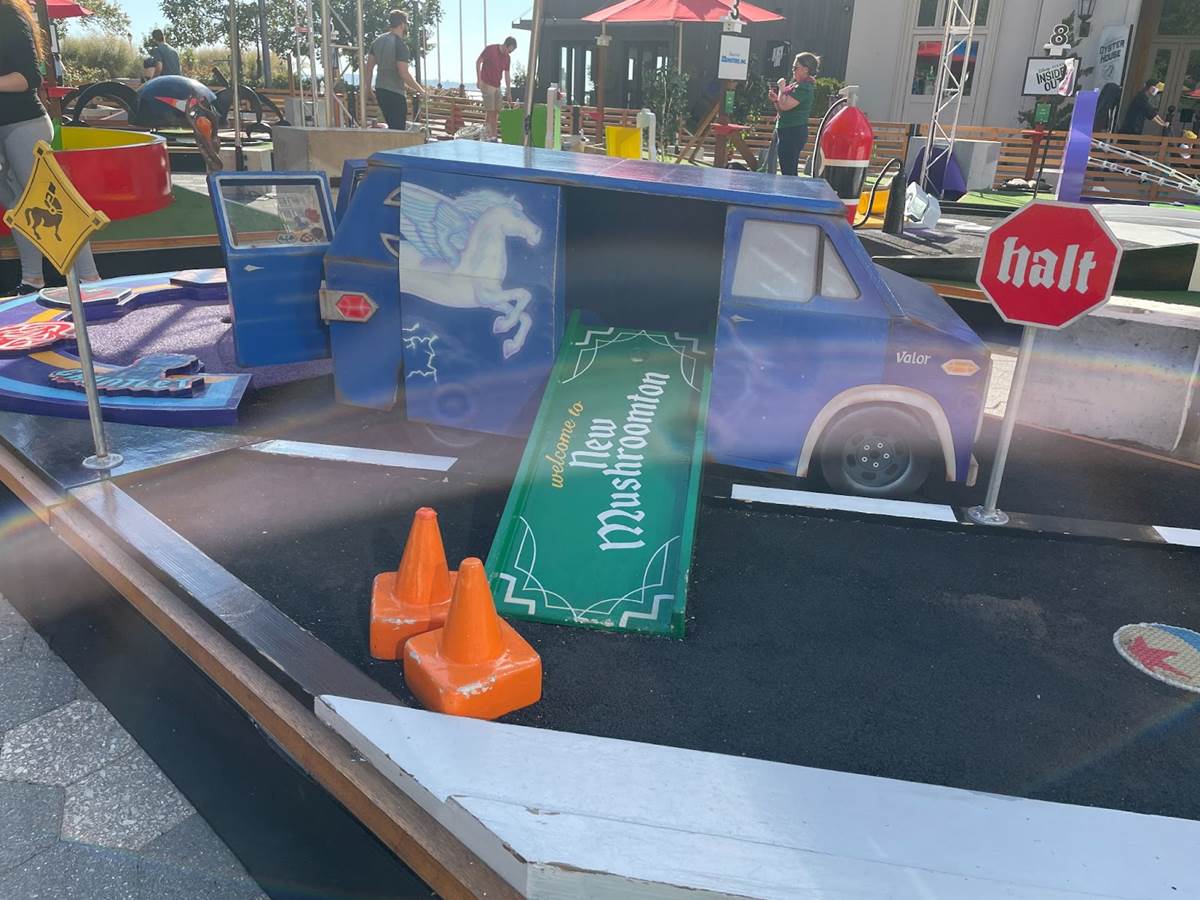 Once through Barley’s van, a ring of patches from his jacket line a hole with Ian’s wizard staff serving as a goal post. 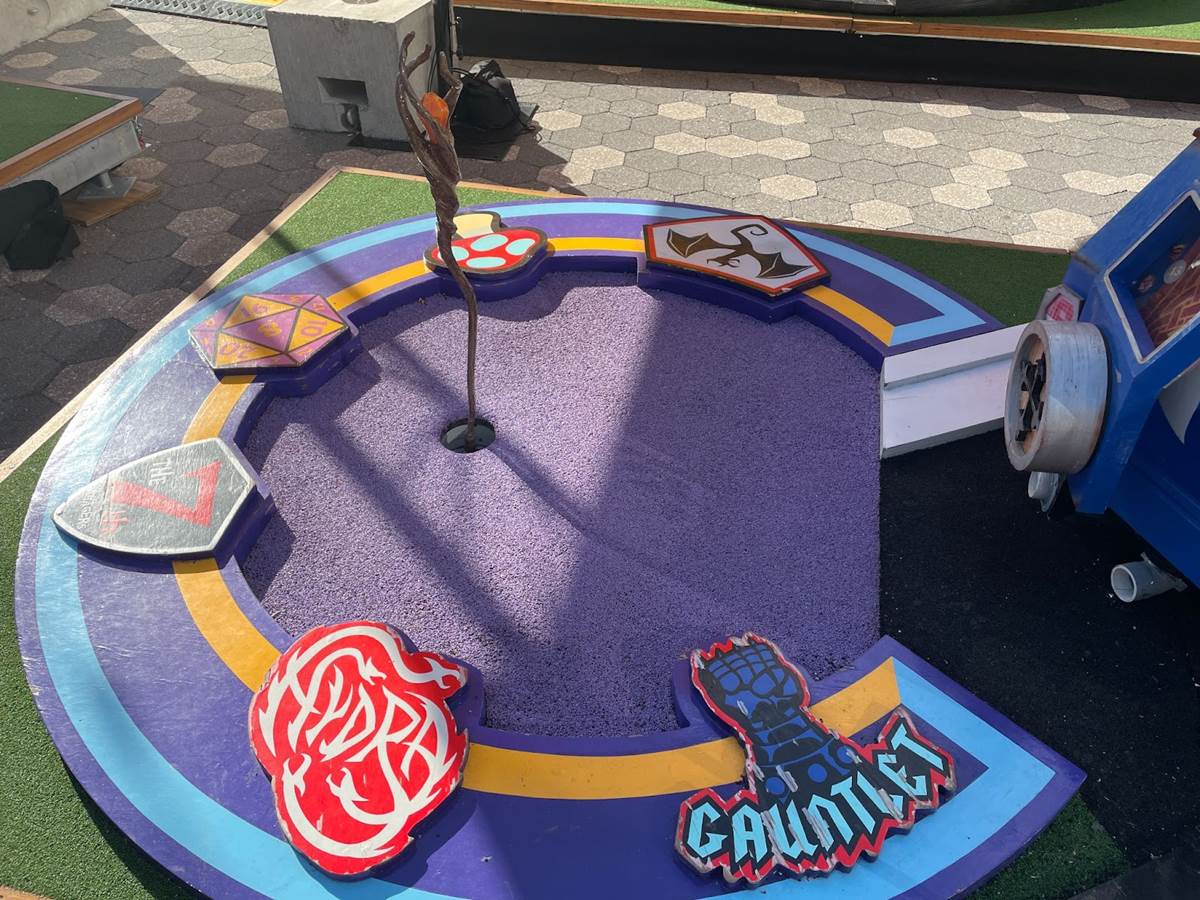 “oooOOOOooooh!” The third and final Toy Story course takes you to Pizza Planet to play a claw game. Using the lever, players position a ramp and drop their ball down the chute. Little Green Men block any direct path to the hole, so your best bet is to try to line up a ricochet for a hole-in-one. Set in New York City, the Soul course follows Joe Gardner’s musical dreams into a sewer hole. Starting at the top of the piano ramp, players press three “Keys” to try and guide their ball smoothly towards the hole. 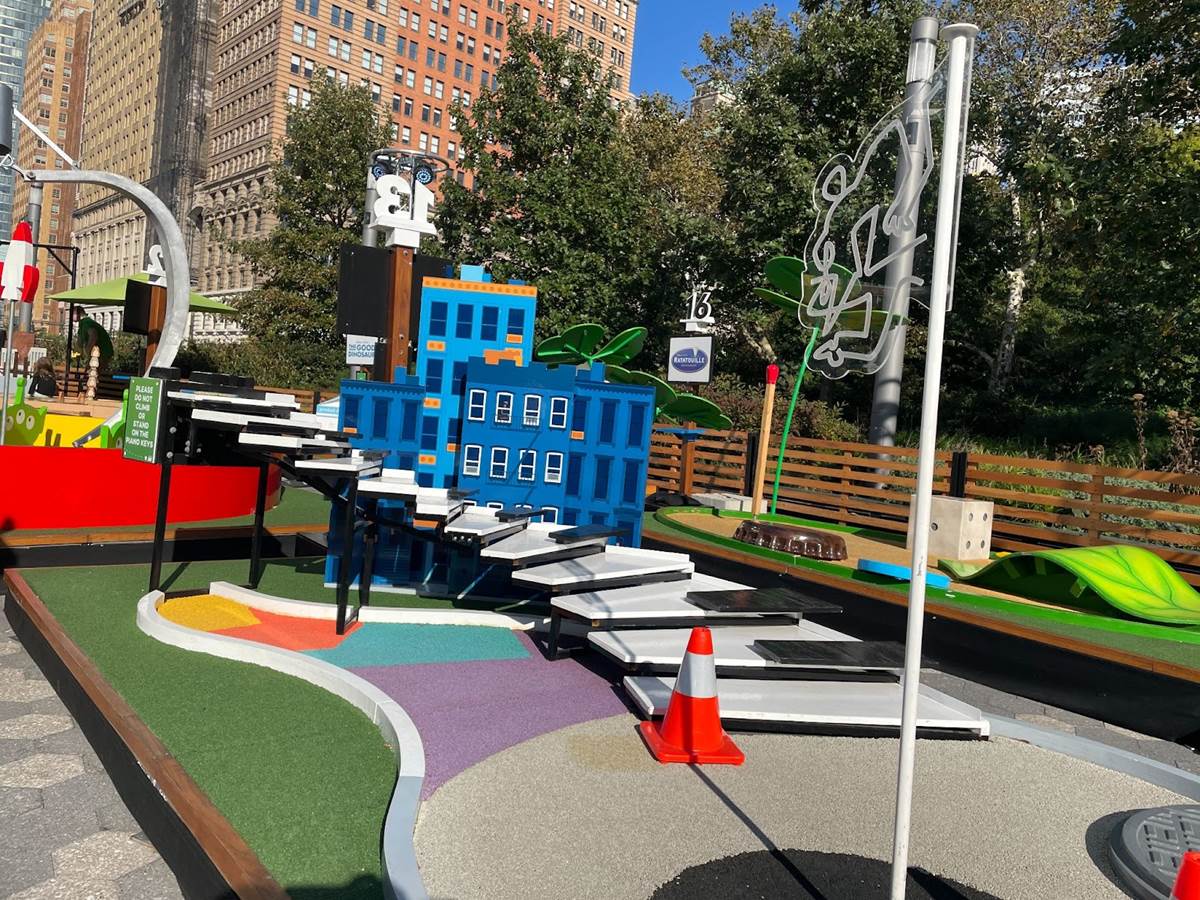 “Ka-Chow!” Course 14 comes from the world of Cars and features Lightning McQueen’s lightning bolt and number 95. If you’re highly skilled, you can try shooting your ball through the loops within the connected numbers to line up a hole-in-one. But honestly, it’s easier to just putt your ball around it and a hole-in-one is still possible this way. This course themed to a bug’s life is much harder than it looks, with an elevated hole at the top of an anthill. On this course, it’s not only important to line up your shot right, which includes an angled leaf ramp as a starting point, but also requires more oomph in your swing than most since the ball’s final destination is elevated. You have to think like a “Little Chef” on course 16, inspired by Ratatouille. The hole is just around that big chef’s hat, but your ball needs to glide around a U-shaped course of large kitchen utensils to get under the hat and into the hole. 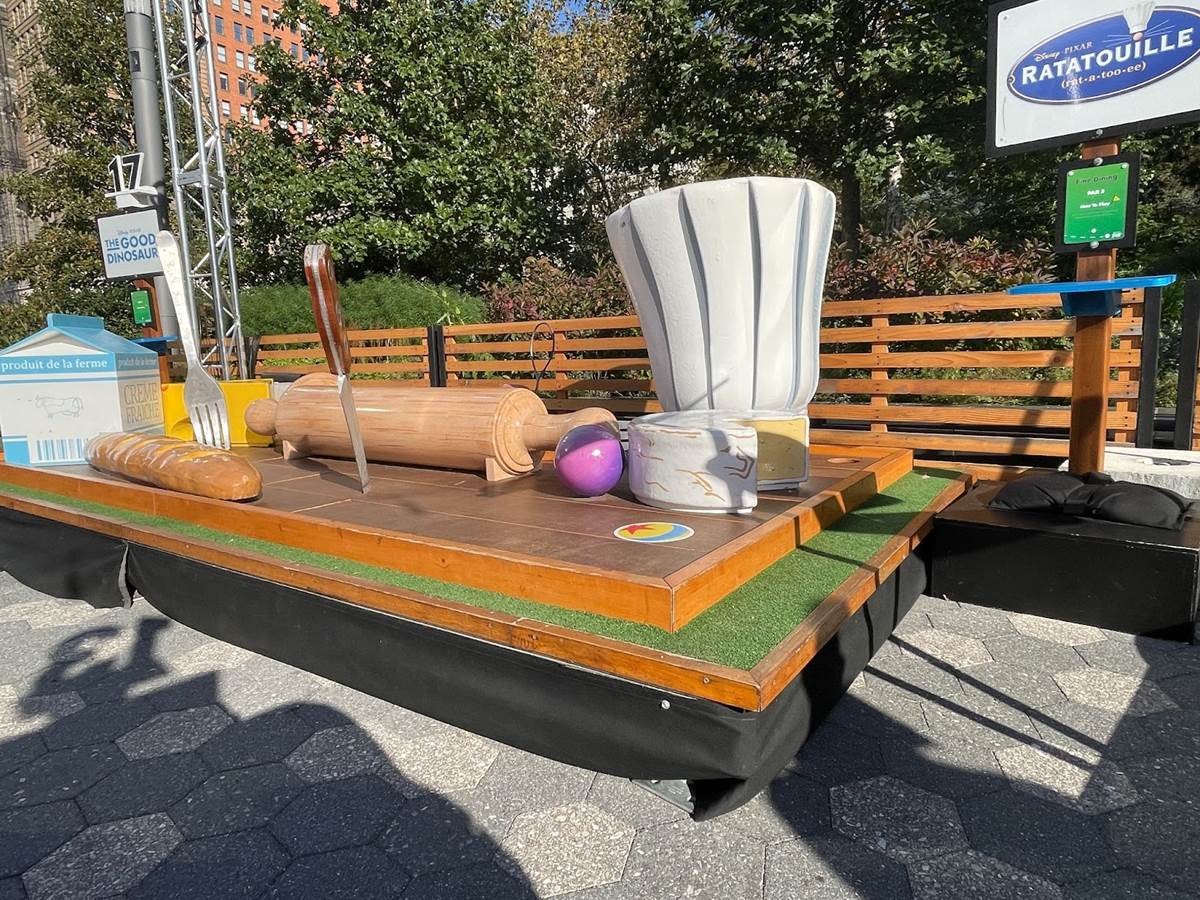 Gophers from The Good Dinosaur create obstacles in this course, set inside Arlo’s footprint. The hole is inside Arlo’s third toe from the left, creating additional challenges on your quest to win the game. Saving one of the best Pixar films for last. The final course fulfilled Carl Fredrickson’s dream of reaching Paradise Falls. “Adventure is out there” and it starts by sailing your ball into the front door of Carl’s house. Once all players have their balls in the house, an attendant works their magic to sail the home to the top of Paradise Falls, where all balls will release and roll down the waterfall. 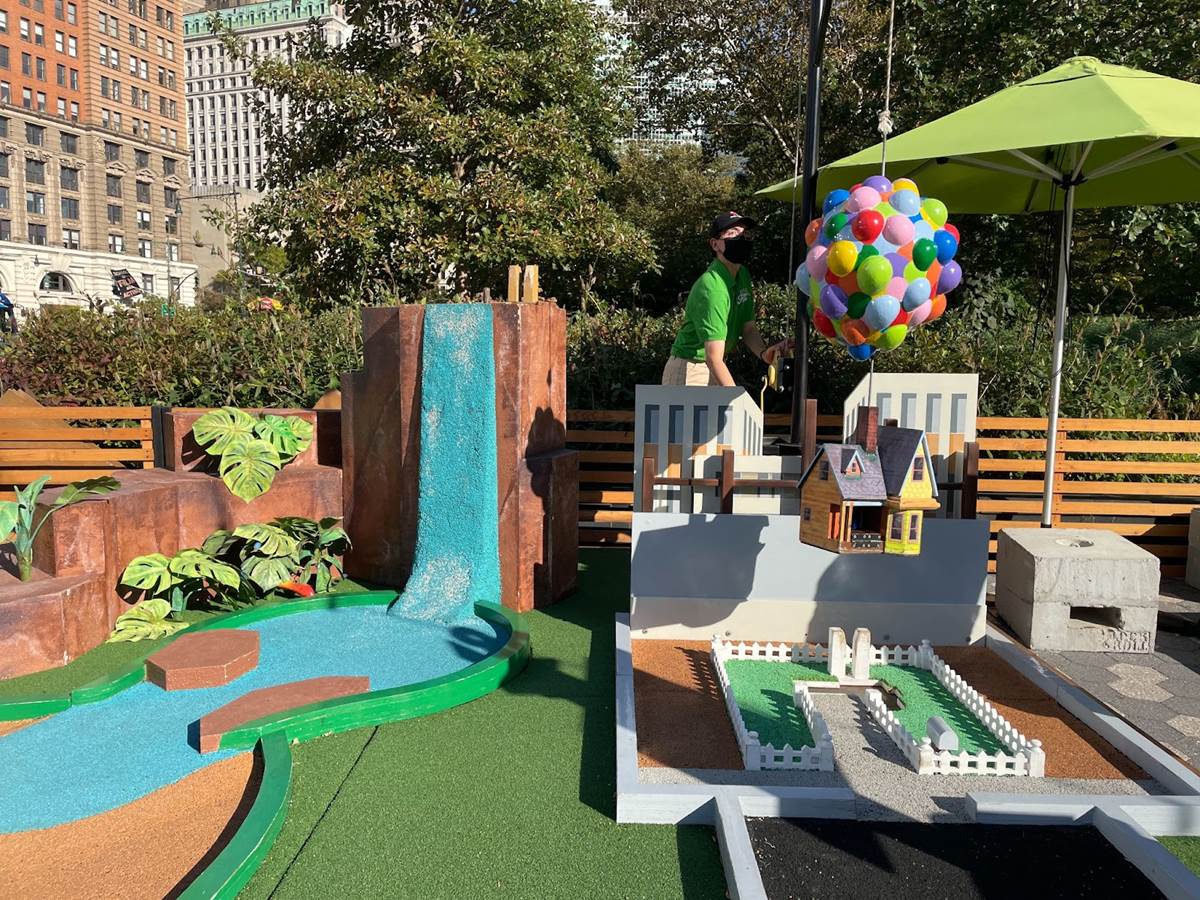 It’s a beautiful final image and from there, it’s smooth sailing into the final hole. Sponsored by Disney+, playing Pixar Putt was a fun way to step inside the worlds of Pixar’s award-winning films that also made me want to revisit some of the stories on the streamer. Pixar Putt is currently available through November 28th and another version of the experience is now available in Australia. It seems designed to potentially travel, so if you can’t make it to New York City or Adelaide, there is the potential for the experience to pop up elsewhere.