Carrie Ann Inaba eerily said it best,“The staaars are here.” Happy horror night everyone! Tyra entered tonight’s ballroom fiercely mummified and ready to read some scary-fast teleprompters. Tonight, the couples are challenged to pay homage to all things horror and the sentiment alone already has me shaking in my boots. It’s hard to believe, but we’ve reached our top ten dancers and it’s anybody’s mirrorball to win. Now sit tight because it’s time for a fright! 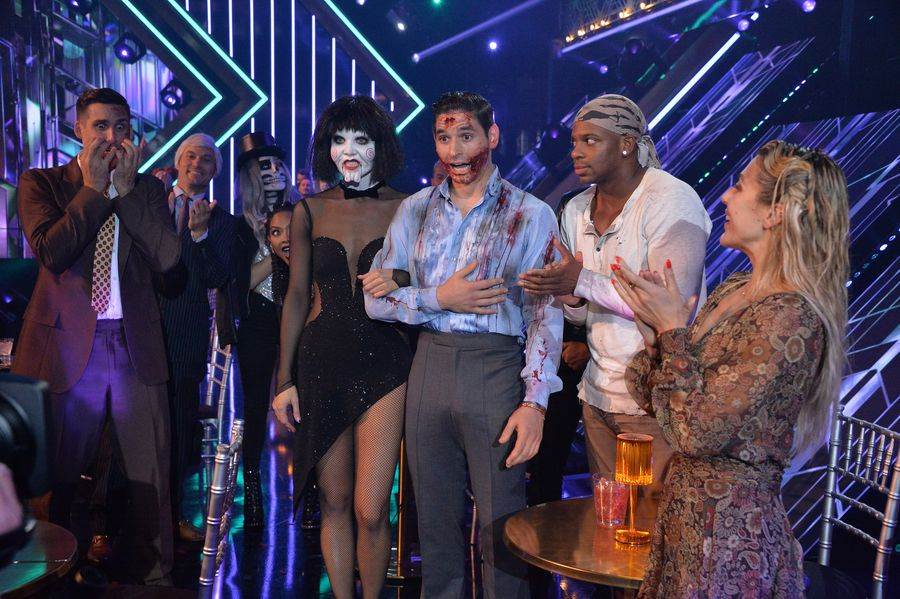 The Miz & Witney – Pasa Doble – If we’ve learned anything from this season, it’s that The Miz loves a good costume. Drag Race fans rejoice because this pair served just as much Gottmik as they did Hellraiser with their freshly pinned faces. The Miz’ embraced the character and brought an excellent and unique posture to the floor. I only minutely screamed at the neck crack sound effect. Judges Scores: 9 – 8 – 9 – 8

Kenya Moore & Brandon – Argentine Tango – Fresh off avoiding the bottom last week and her first nine, Kenya keeps climbing up the waterspout. The pair continued the trend of black leather while paying homage to my greatest eight-legged fear. Speaking of legs, Kenya has mastered the straight-leg extension and Brandon is a genius to keep showing it off. Devil-Bruno gave permission for Kenya to “wrap him” in her web anytime. Judges Scores: 8 – 8 – 8 – 8

JoJo Siwa & Jenna – Jazz – I’m scared of clowns, but I’m not scared of #FriendGoals so this dance was one of my favorites of the season. (By the way, if you’re not watching these two’s TikToks, you’re only getting half of the story.) Although dressed like a clown, JoJo is no fool. She had no hesitation leaning into this horrifying (and impressively acrobatic) monster. I’m giving extra kudos to Jenna for this innovative clown-charleston. Judges Scores: 10 – 10 – 10 – 10

Cody Rigsby & Cheryl – Cha-Cha – What’s everyone talking about? Cody’s just a happy camper! Rockin' and a-rollin’ and a-literally slaying. Hearing “There Will Be Blood” by Kim Petras was great, but I have to say this dance was a bit anticlimactic to me. Still, his angles were definitely his best so far and he seemed to be very confident in each step. Spider-Carrie Ann shared she was impressed with them finally “dancing together as one.” Judges Scores: 9 – 9 – 9 – 9

Jimmie Allen & Emma – Contemporary – I’m starting to think I should look up a Jimmie Allen song because I really love him so much. Emma was brilliant to incorporate American Sign Language with this Quiet Place piece because this “Say Something” number had me feeling all the feels. Jimmie is so fluid with his movement. I’m shocked he doesn’t have any former dance– WAIT, IT RAINED!?! HE SACRIFICED HIMSELF?! JIMMIE CRIED, YA’LL. Add a ten from me. Judges Scores: 10 – 9 – 10 – 9

Olivia Jade & Val – Pasa Doble – This is the Emergency Broadcast System announcing the commencement of Olivia Jade’s “America-has-no-choice-but-to-love-me” approach! Her movement cuts the floor with a particularly maniacal edge as she conquered this pasa doble. Val made the right choice to challenge her to a more aggressive routine. As Skeleton-Zombie-Derek noted, it was a “very difficult routine” and Olivia truly kept up. This dance should leave her out of the bottom two, but that’s also what I thought last week. Judges Score: 9 – 9 – 9 – 9

Melora Hardin & Artem – Jive – There’s no such thing as a good horror night without some classic camp. This pair may look a little ruff (ha!), but their movement remained sharp and methodic. I agree wholeheartedly with Spider-Carrie Ann as she said the number was a bit too similar to the rest of Melora’s repertoire. It seemed… safe. However, if there’s an award for Most Interesting Person Melora’s got it in the bag. Her dad was in Cujo and her mom taught Leonardo DiCaprio and THE Brian Austin Green. Cool! Judges Scores: 8 – 9 – 8 – 9

Iman Shumpert & Daniella – Contemporary – Unlike nearly every other horror flick, I’ve actually watched Us and I didn’t appreciate being reminded of the bone-chilling plot, but wow! From the opening moments, I was on the edge of my seat. We have to give huge props to Iman for keeping the pace with the Us theme song because it cannot be an easy task. Plain-Ole’-Len commended Daniella for her “brilliant concept” and Skeleton-Zombie-Derek jumped on the judges table. Mark my words, this dance is going to go viral. Judges Scores: 10 – 10 – 10 – 10

Suni Lee & Sasha – Tango – We’re shifting to the small screen as the pair celebrates The Vampire Diaries! I feel like Suni is growing up before our very eyes. Playing the role of Nina Dobrev (who needs a character name?) definitely got Suni more engaged with the piece and the tension of the tango. ”Tonight you had bite!” Devil-Bruno rightfully proclaimed. It feels wrong giving any notes to a literal Olympian, but unfortunately as Skeleton-Zombie-Derek noted, the steps felt a bit off. Judges Scores: 9 – 9 – 9 – 9

Amanda Kloots & Alan – Argentine Tango – While there seemed to be some tension in the rehearsal room this week, it looks like it paid off for these two in this wild finale. Their footwork was so intricate that I’m in awe they didn’t tangle up at some point. Spider-Carrie Ann and Plain-Ole’-Len both commented Amanda was a bit too stiff, but I felt like it added to the puppetry characterization. The scores ultimately don’t matter because Amanda scared the living daylight out of me. Judges Scores: 9 – 9 – 10 – 10

Despite my fears, I actually made it through the entire episode without covering my eyes. (Well, maybe other than a few beats in the Us number.) The bottom two are revealed as Kenya Moore & Brandon and Suni Lee & Sasha. Ten couples turned to nine as Kenya Moore &  Brandon were sent home. Although upsetting, this Real House Wife should be Real Proud of her incredible progress on the show. Next week, hold the tricks because we’re getting treated with another fantastic episode of Dancing With The Stars!