Episode 5 of Dopesick has the legal team looking to prosecute Purdue in search of a whistleblower, while the victims of OxyContin addiction plunge further into their nightmare of dependence. 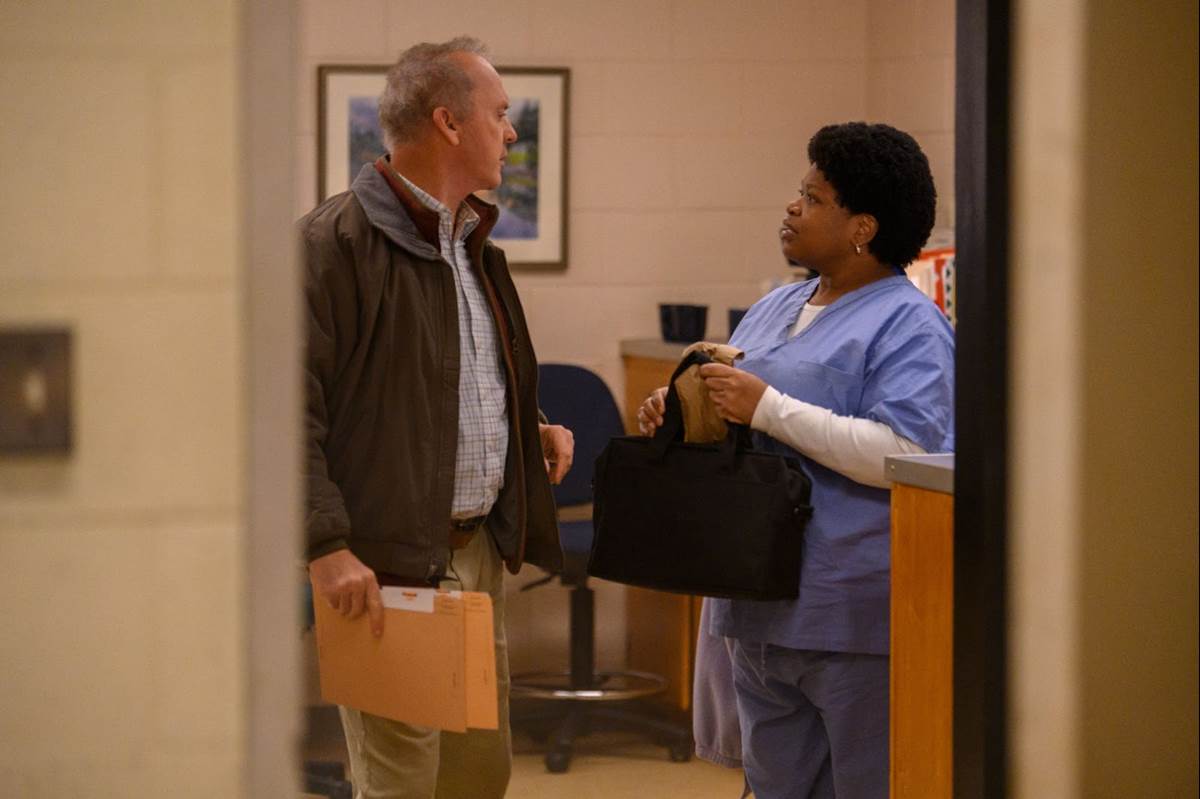 It’s 2002, and the scourge of OxyContin has left families filled with tragedies. One mother who has witnessed the death of her daughter due to Oxy addiction acts. She builds her own website detailing the lies that Purdue Pharma has constructed around the benefits of Oxy. Feeling like she is screaming into the wind, someone is paying attention. Rick Mountcastle (Peter Sarsgaard) and Randy Ramseyer (John Hoogenakker) call and want to talk about Purdue and OxyContin.

Dr. Finnix (Michael Keaton) is struggling with his addiction. It’s 1999, and the doctor has now co opted a patient to help him procure Oxy pills all over the state. Finnix’s addiction is so bad that he is taking up to 400 mg a day in pills. Betsy Mallum (Kaitlyn Dever) is completely out of control. She’s stealing her mother’s jewelry and pawning it for drug money.

Richard Sackler (Michael Stuhlbarg) is overjoyed with the success of OxyContin. To Sackler and the rest of his family, Purdue Pharma has a billion-dollar drug that will make them wealthy beyond their dreams. With confidence, Richard looks to make some executive changes at the company and hopes to be named president of the company. His idea is rejected by his uncle and the board motion fails for now.

Fast forward to 2004, Rick and Randy question which is the best route in their case against Purdue. They know an insider is needed, and so a whistleblower is sought out. Between the two Assistant United States Attorney’s they pursue sales reps from Purdue in hopes that one of them will testify. Randy has some luck in talking with a former sales rep, but she promptly kicks him out explaining that she would never testify thanks to her Non-Disclosure Agreement that she signed when Purdue terminated her employment.

Back in 1999 Billy (Will Poulter) is starting to see a change in the communities he visits. On a sales trip, Billy witnesses a person snorting Oxy in a car. There is nothing illegal about the act, but Billy’s conscience is starting to get the best of him. With his girlfriend Amber (Phillipa Soo) Billy talks about his experience and expresses his doubts about the pill. Amber tells him to knock it off and reminds him how lucky they are and all the money they will be able to make thanks to OxyContin. 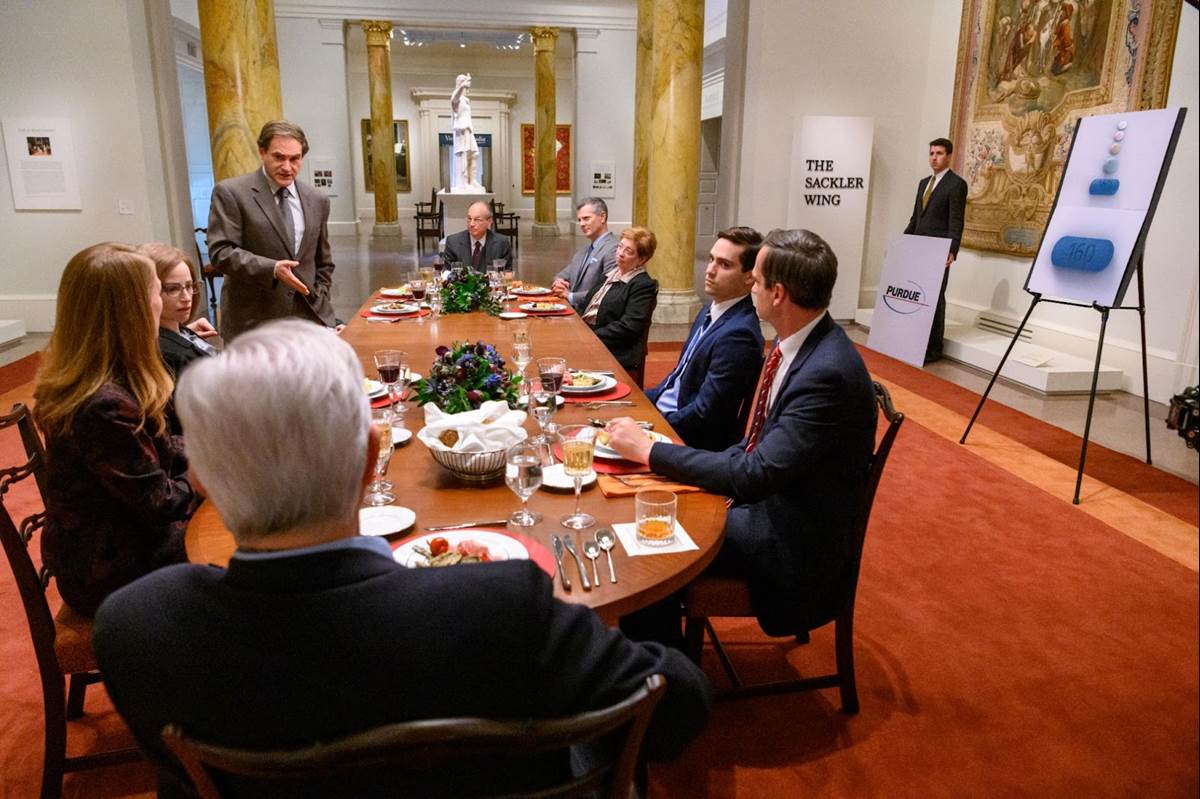 Abuse of Oxy has made its way back to head office of Purdue. When a high-ranking secretary is asked to do some investigation about Oxy abuse, her internet searching is shocking. She quickly learns that Oxy is all the rage throughout multiple chat rooms, with instructions on how to make the users high immediately. Her discoveries are reported in an email which is sent to all senior level executives at Purdue.

In 2001, Bridget Meyer (Rosario Dawson) is looking for a way to outsmart Purdue and put pressure on the FDA to reevaluate Oxy. Her husband suggests leaking a story in the newspapers that will ratchet up the tension and force the FDA to act.

Rick Mountcastle is unsure of the case he is building against Purdue. After visiting with a priest Rick learns that a young parishioner died from an overdose related to OxyContin. His continued investigation leads him to talk with the creator of an anti-OxyContin website which brings us back to the beginning of the episode.

While interviewing the woman behind the Oxy website, Rick and Randy learn that much of the information provided to the site was given by the former secretary of Purdue executive Howard Udell.

It’s 1999, and Dr. Finnix is about to crash hard from his drug addiction. While trying to perform a simple procedure on a patient in his office, Finnix loses his concentration and nearly kills the man. At the hospital, Finnix is arrested, thanks a tip from his nurse and the good doctor is lead away in handcuffs.

Across town at the Mallum household, Betsy is confronted by her mother and father over the theft of her mom’s jewelry. Admitting that she sold the jewelry for money, Jerry Mallum (Ray McKinnon) is angered by this act and grabs Betsy’s pills flushing them down the sink. This sets off a chain reaction in the household, where Betsy destroys the quilt that she made with her mother.

The 2001 press war instigated by Bridget Meyer has forced the hand of the FDA, and Purdue Pharma. Sensing a problem, Purdue is willing to meet with the DEA, but Bridget is asked to skip the meeting because her approach is too confrontational. Unwilling to miss out on such an important meeting, Bridget enters late and begins questioning Richard Sackler and what he and others at Purdue knew about the dangers of OxyContin. Clearly rattled, Sackler and the rest of the Purdue team leave the meeting. Encouraged by her boss, Bridget continues her investigation.

Meanwhile, Rick and Randy have learned the identity of fired secretary from Purdue. Though the secretary is willing to testify about what she knows from her time at Purdue, Rick and Randy realize that the secretary, who was a former OxyContin addict, is not a viable choice after she relapses because of the stress of the situation.

Betsy and Dr. Finnix both enter rehab for their addiction. Betsy’s parents try to get the stolen jewelry back from the pawn shop, learning they have two options they can pursue. They can press charges against Betsy, or they can pay $3000. The parents leave without the jewelry,

At Purdue Pharma, Richard Sackler is on a mission to succeed. Already proving his success with OxyContin, Richard persuades his cousin to unite with him to take control of the company. At a family meeting, Sackler outmaneuvers his uncle and takes over the company as the president.

In rehab, Dr. Finnix is surrounded by other addicts, and the while quietly adjusting to the routine of recovery, Finnix has a visitor. His former favorite sales rep Billy has arrived. While Billy is baring his soul about Oxy and how sorry he was, we see a human side to Billy. He expresses remorse because he too got addicted, but his addiction was to the money that OxyContin brought him. Finnix explains he lost his medical license, and that rehab was a way to stave off jail time. As much as Finnix is thankful for Billy’s confession, that’s not what the former doctor wants. He asks Billy if he has any Oxy. 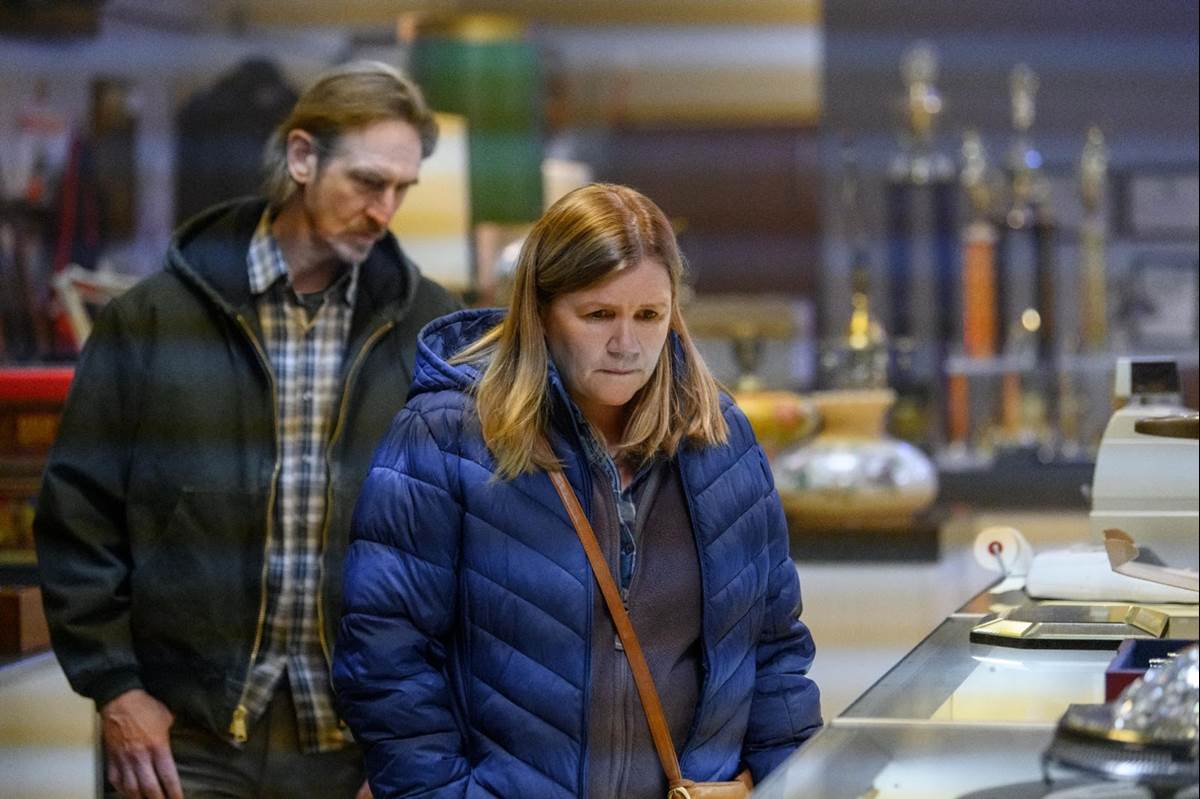 The rise of Richard Sackler continues. As he and other executives are looking at purchasing a new office building for Purdue, Richard wields the strength of his position and gives an all-cash offer for an expensive new office tower for the company.

Drug addiction is terrible, and Dopesick dives deep into the repercussions of what OxyContin did to people and shows the multiple levels of pain for the addicts and their families.

While the hopeful recovery of Dr. Finnix and Betsy is what we wish to see, the confessional by Billy near the end of the episode is a positive note. Will Poulter has infused his character with a soul and proves that his character knows right from wrong. Hopefully a redemptive arc will allow Poulter continued room to grow his character.

What’s fascinating at the end of the episode is that Richard Sackler is purchasing his own glass castle. The new company office building is lined with windows, and as the old saying goes, those who live in a glass house shouldn’t throw stones. It will be interesting to see how the arrogance of the Purdue executives will result in the throwing of the largest stones from within their own glass castle.