“There’s so many ways to be wicked” with the new line of Disney Villains dolls from Hasbro. With playline fashion dolls and the first Disney Villain to be included in the collectible Disney Style Series, these new releases can make your home more sinister than ever. Hasbro sent us the entire line to review and we’ve included an unboxing video at the end of this post, which showcases some of the extra fun of the collection. Sold individually, the Sinister Styles dolls retail for $20.99 and include one Disney Villain fashion doll and accessories. With completely plastic-free packaging, each doll comes with a red magic mirror that can be used to reveal hidden compartments within the box to find accessories for each doll. Their dresses also included a few hidden items that can only be seen through the red transparent mirror. 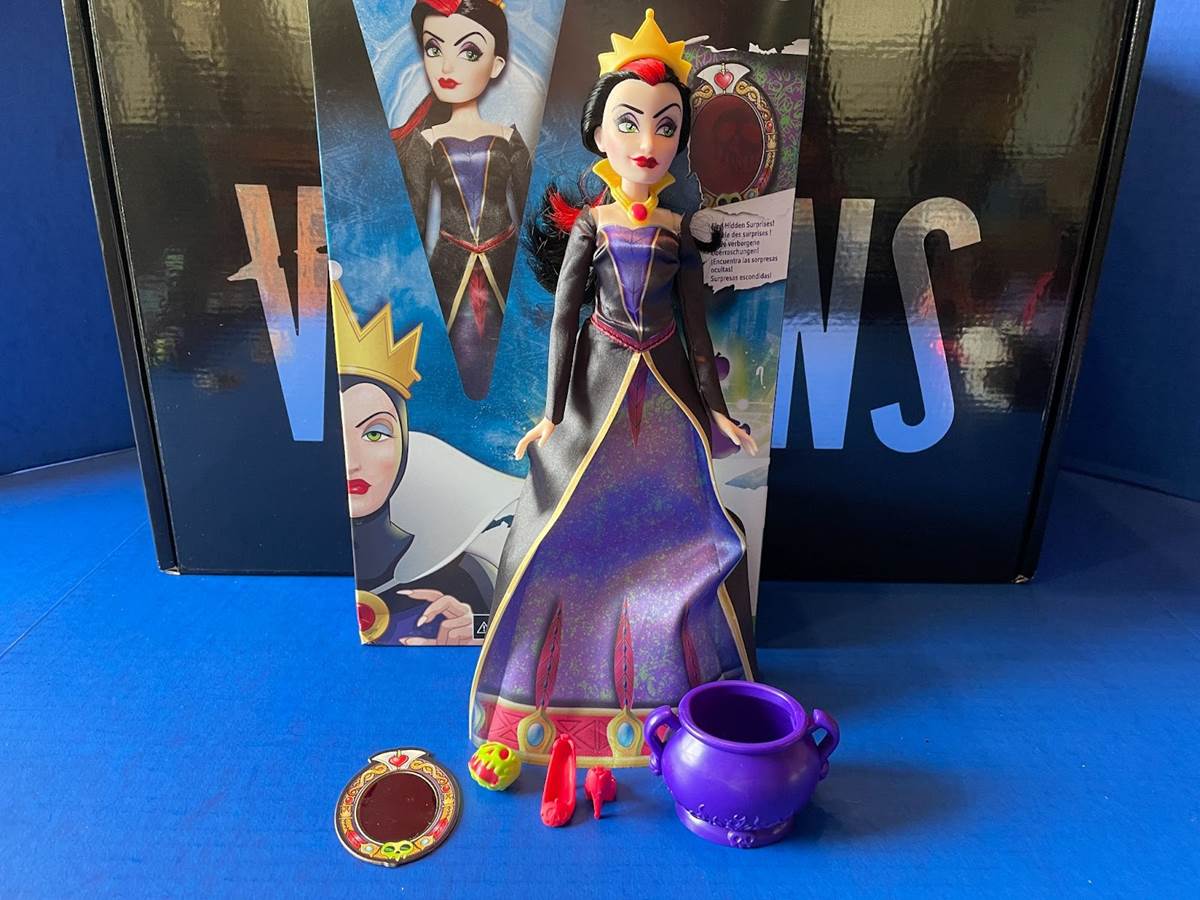 The Queen from Snow White and the Seven Dwarfs comes with a collar, cauldron, poison apple, and red shoes with a poison apple design on the front and the dagger from her heart-shaped box on the back. The magic mirror reveals poisoned apples in the design of her dress. Maleficent from Sleeping Beauty comes with a bright green flame that can be held in her hands, a scepter, a dragon collar, and a pair of shoes that look like purple flames. The magic mirror reveals a dragon emerging from the flames on her dress. Cruella De Vil from 101 Dalmatians comes with a removable skirt belt, two pairs of shoes, one of which features the hood of her classic car on the front, and a purse. The magic mirror reveals spots along the red hem of her dress. 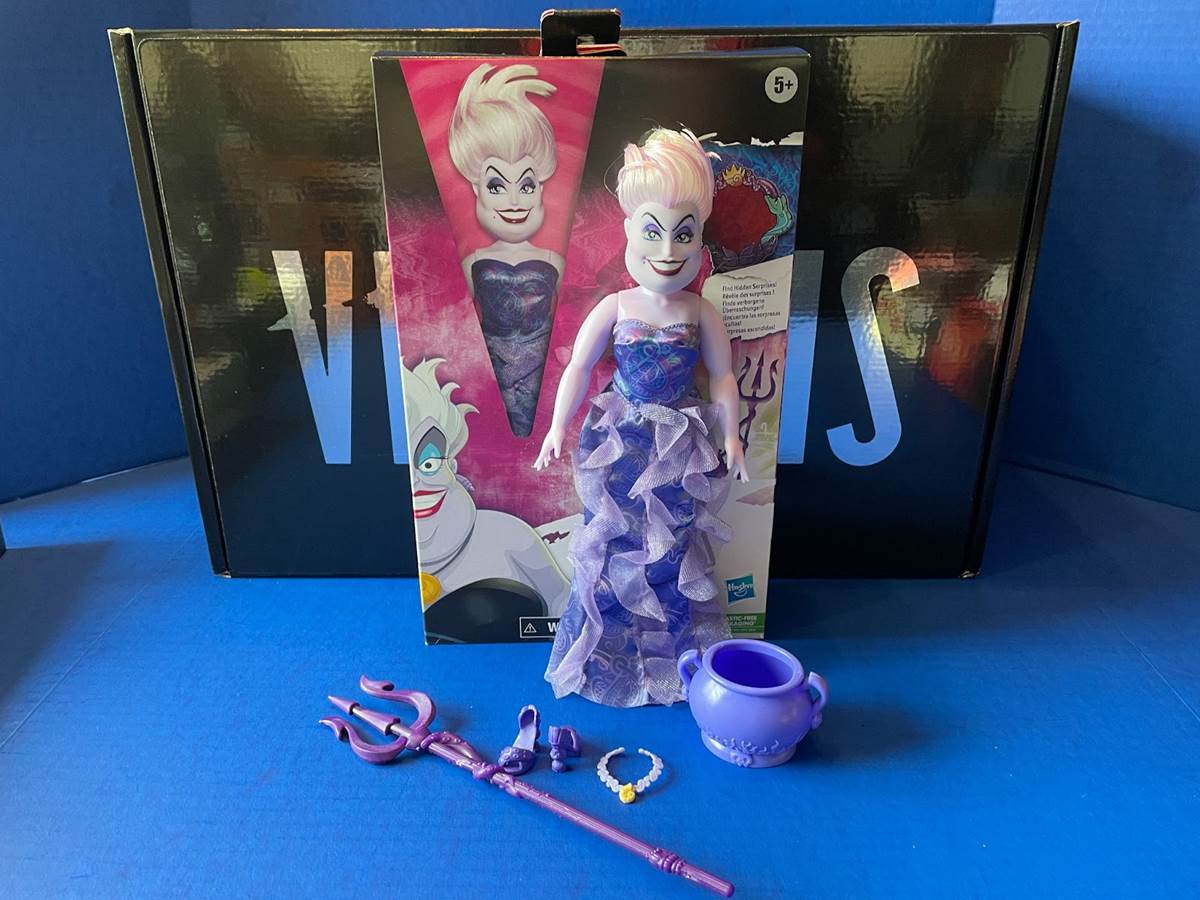 Ursula from The Little Mermaid comes with a necklace with the magic shell in it, a trident laced with tentacles, tentacle shoes, and a cauldron. The magic mirror reveals the shell necklace on her dress. 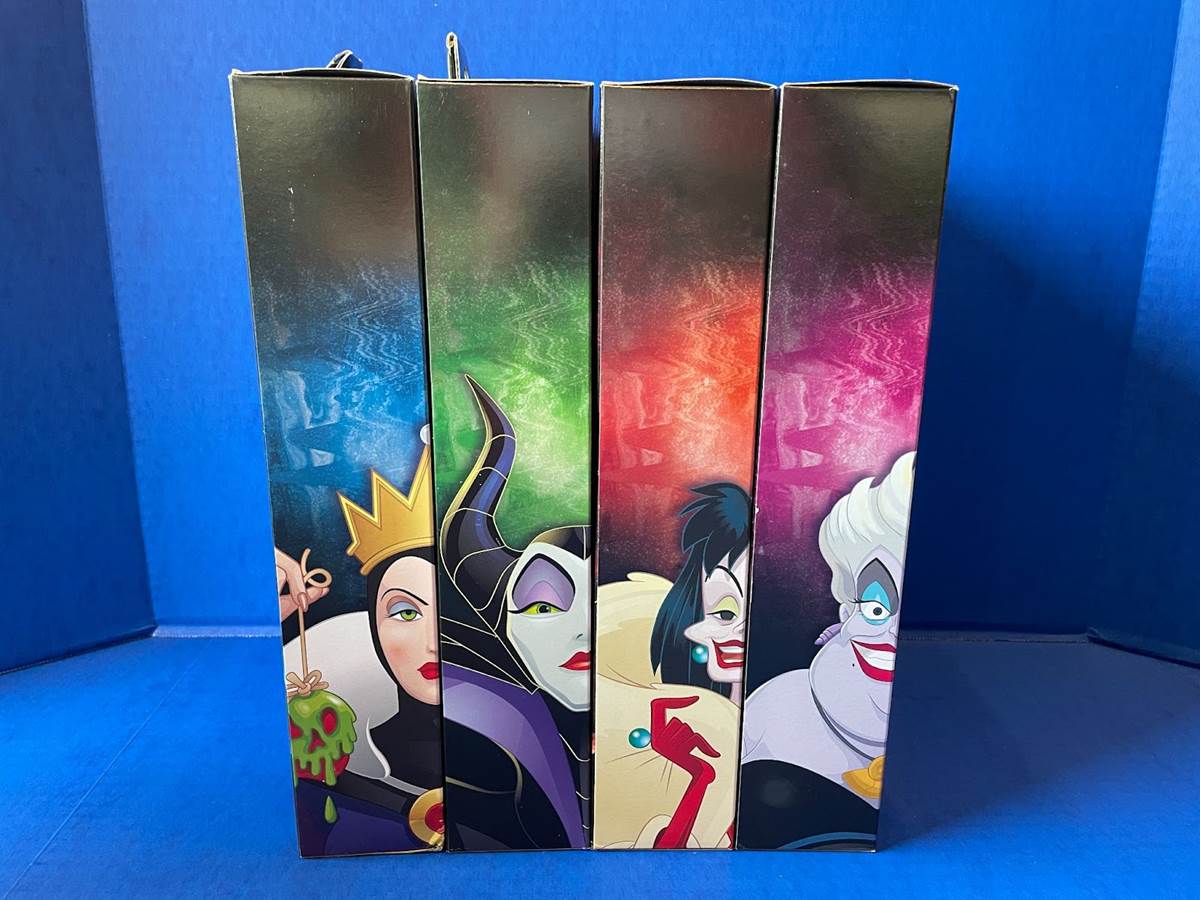 The packaging for this collection is beautiful and can become a convenient way to store the dolls and their accessories. With elements of the box revealing compartments with the magic mirrors, parents may find that kids don’t want to recycle them, at least not right away. 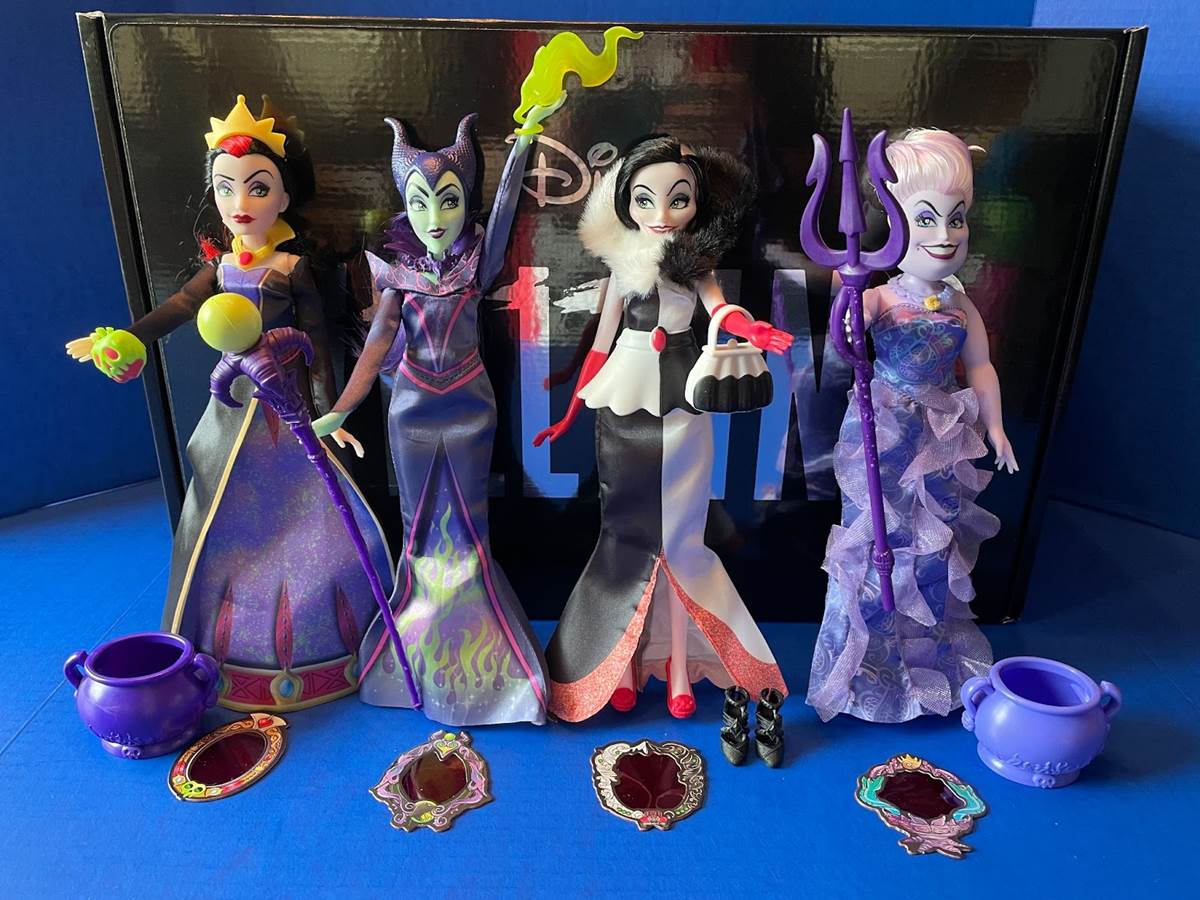 Three of the Disney Villains in this collection also correspond to Disney Princess dolls from Hasbro, making them fun playline companions to Snow White, Aurora, and Ariel. 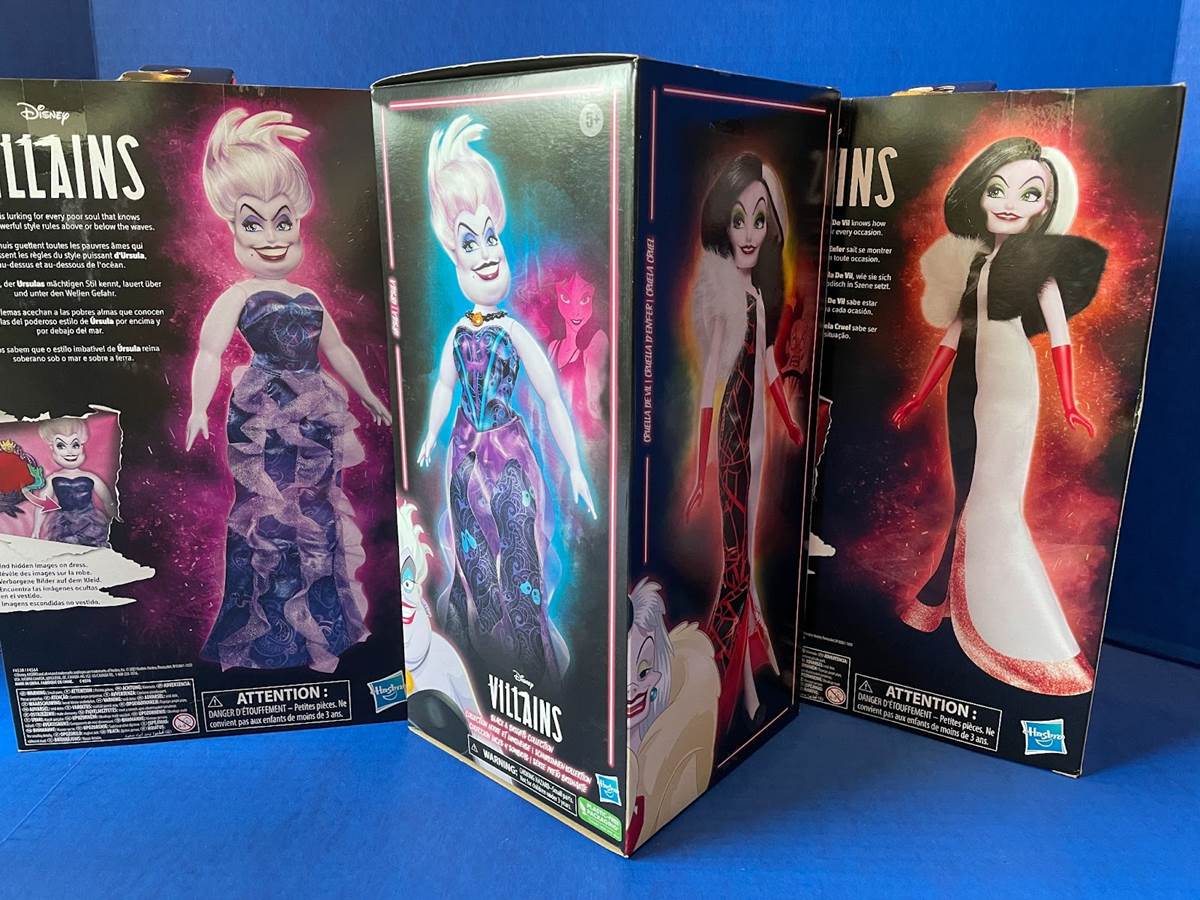 The Black and Brights Collection is a 4-pack that features the same four dolls, although they are in different styles. Retailing for $68.99, this box set saves a little over $10 off the individual price, but also includes fewer accessories. Each character comes with a pair of shoes and The Queen also has a collar, but that’s the extent of the accessories. With brighter neon designs, some of the characters in the Black and Brights Collection look closer to their movie versions. Maleficent, for example, has black horns and a darker dress, looking closer to the way she appears in Sleeping Beauty. The dolls also have translucent vinyl embellishments, including flamed fringe on Maleficent’s sleeves and twisting tentacles on Ursula’s dress. The shoes in this line are the same plastic molds as the Sinister Styles dolls, but they’re all a different color, typically black or dark purple. In the case of Cruella De Vil, she only includes one pair of shoes in the box set, the ones with the hood of her car on the front. The Disney Style Series Cruella De Vil doll is in packaging similar to last year’s holiday Cinderella doll, a wider box that makes it easier to see the doll in all her beauty without removing her from the box. She uses the same face mold from the playline doll, but has rooted eyelashes, more deluxe hair, and her body is more articulated with bendable elbows and wrists in addition to shoulders, hips and neck. This doll retails for $41.99. One side of the box is dated with the year of release, 2021, and the back of the box shows the concept art for this fashion-forward doll. 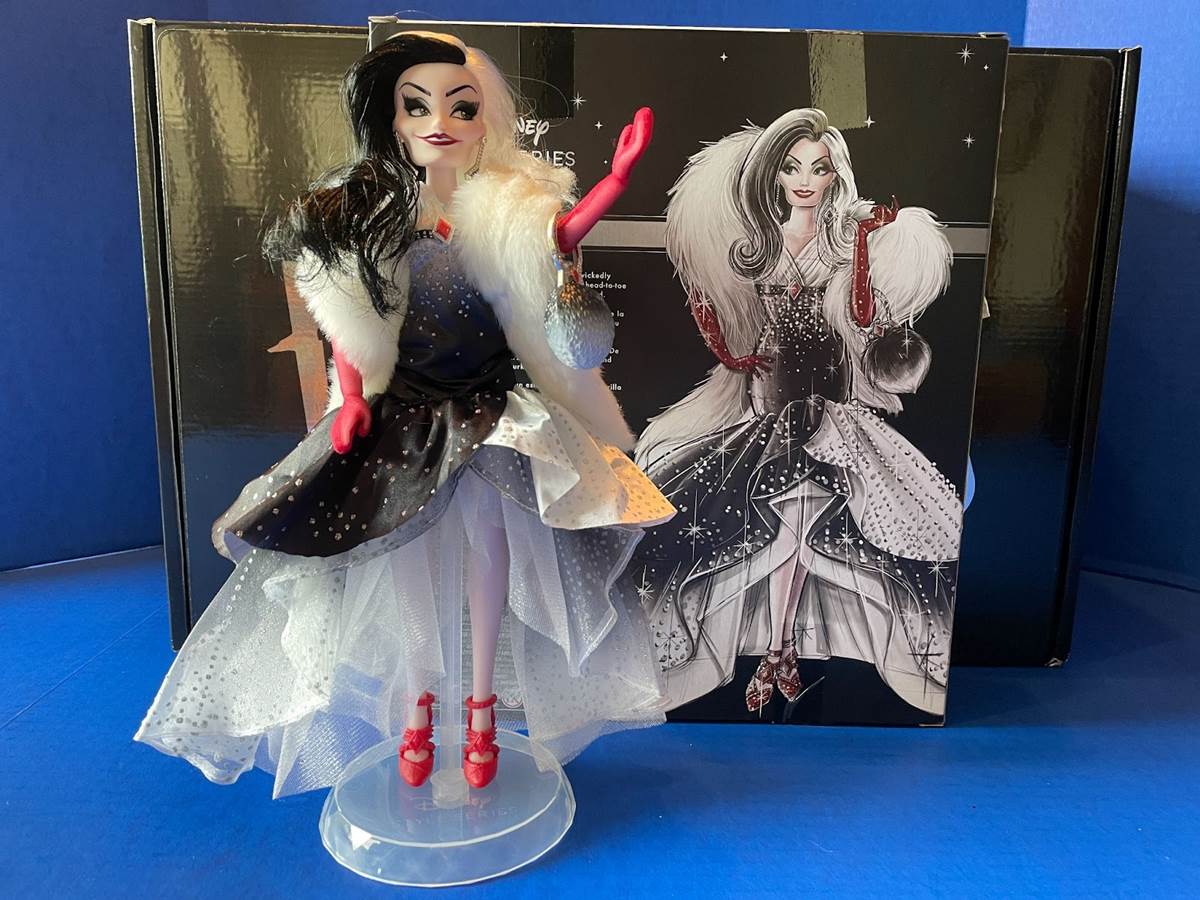 Using the included faceted doll stand, which matches the one that comes with previous Disney Style Series dolls, it’s easy to pose and display your Cruella De Vil doll however you wish. The shoes are a red version of the second pair that came with the Sinister Styles dolls, which has diamond accents that match this doll’s earrings. 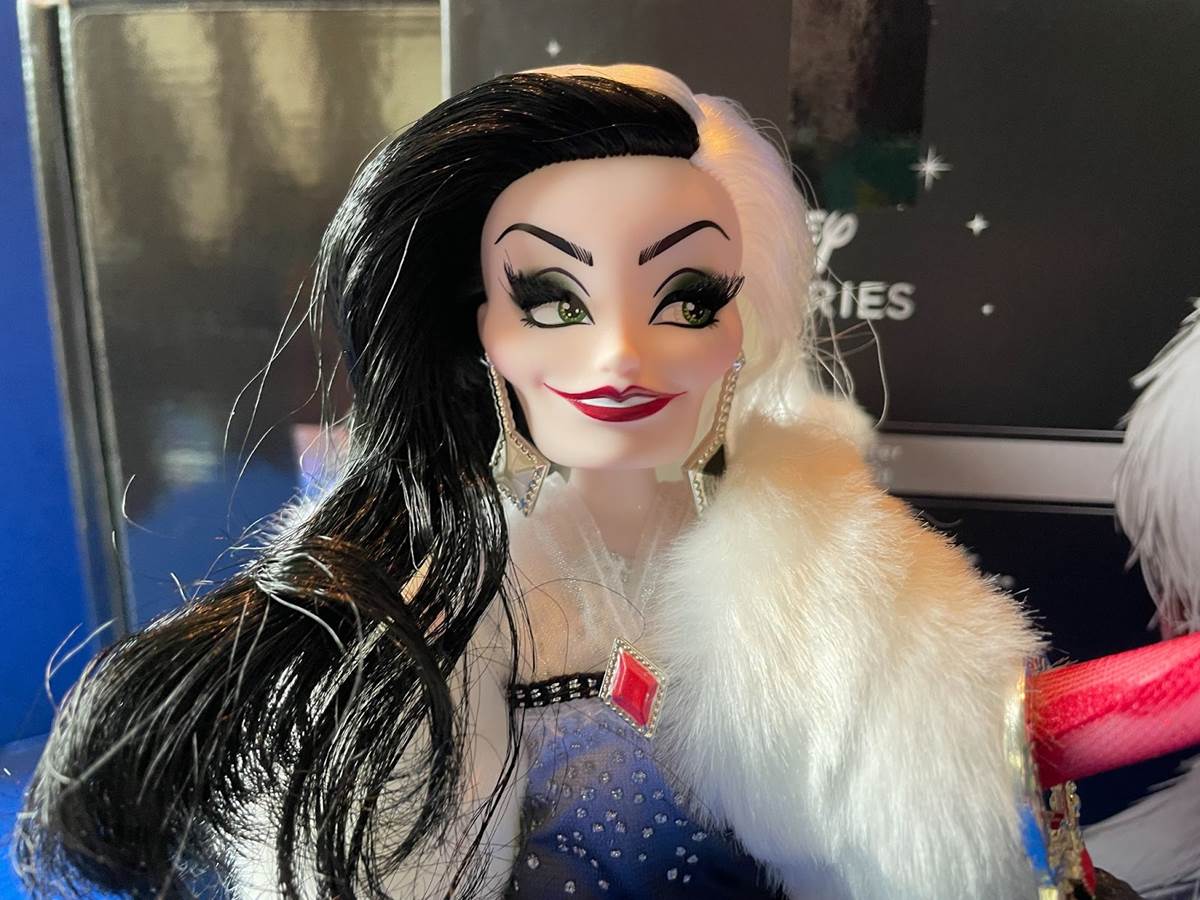 The shawl is removable and the earrings have a metallic look, a white gem on the black side of Cruella’s hair part and a black gem on the white side. The center of the dress includes the red accent color on a matching gem. 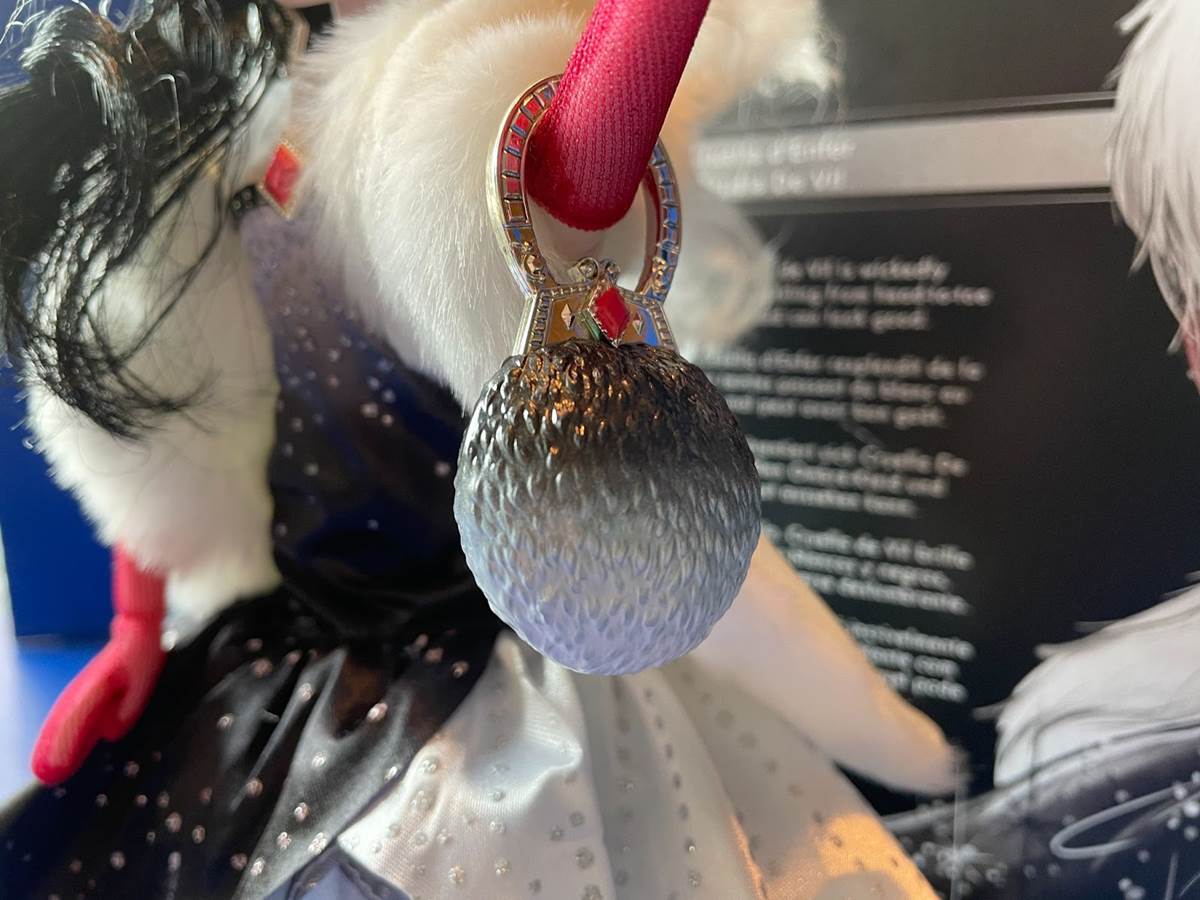 Her handbag has a metallic-looking clasp and along with glitter dot accents, these pieces catch the light and create a striking appearance. 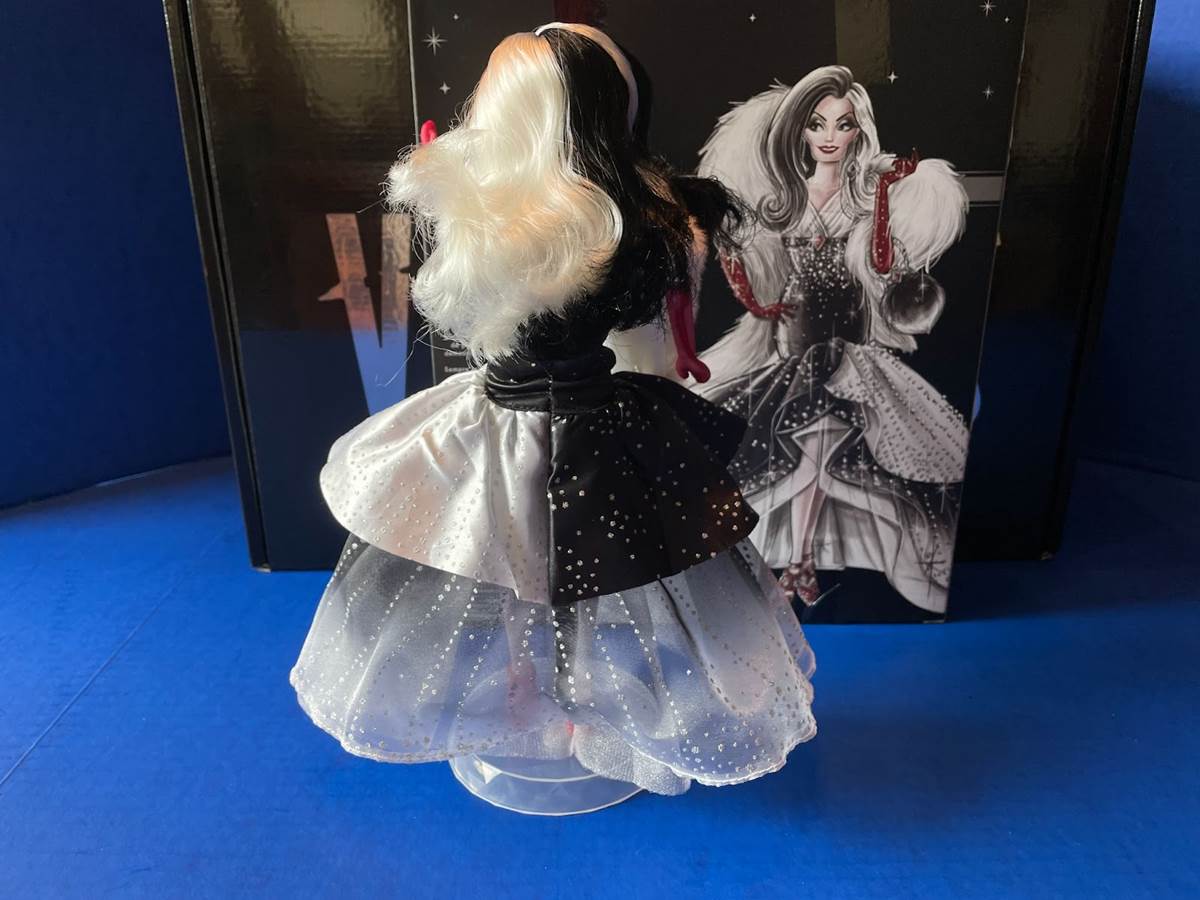 With a flowing tulle skirt with cascading hues of black and white, the Disney Style Series Cruella De Vil is a vision to behold from any angle. 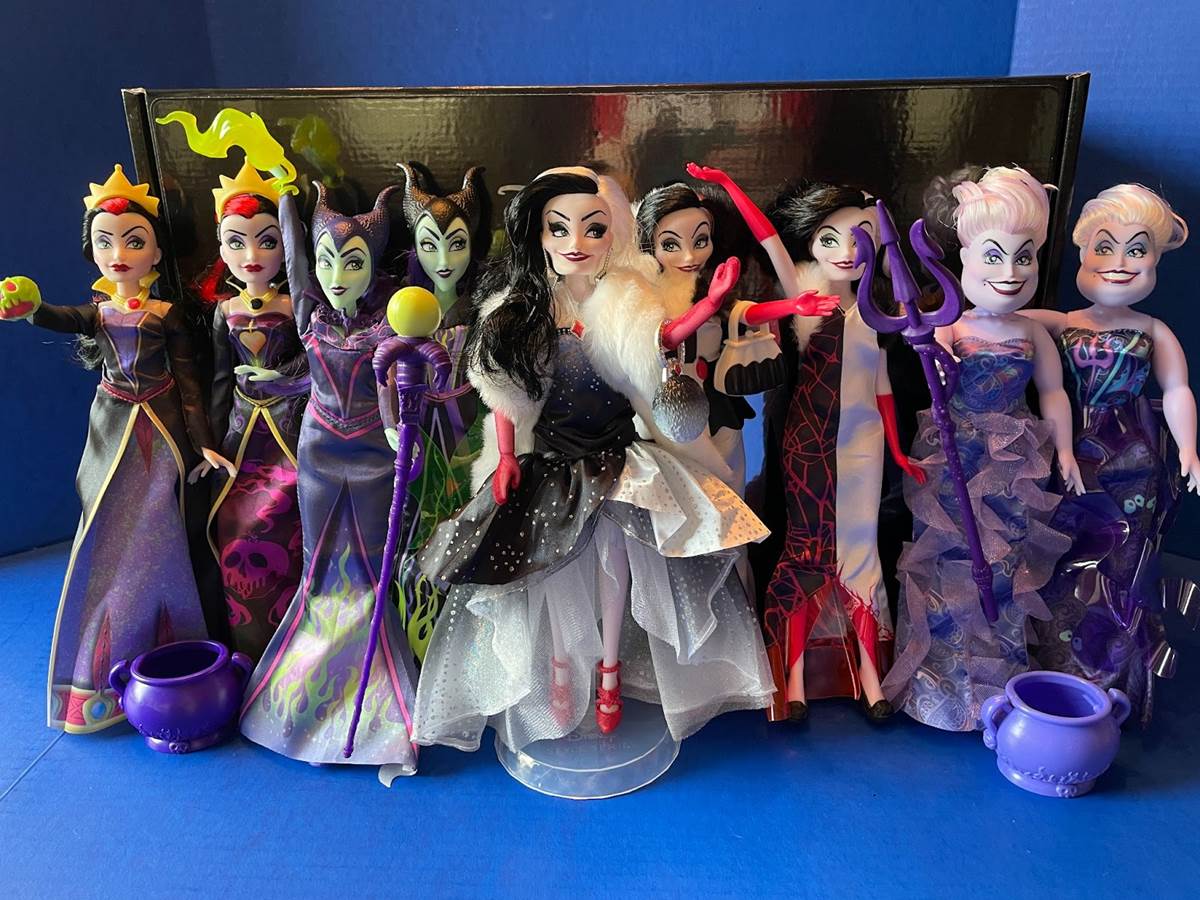 Brand-new in fall 2021, all of these Disney Villains dolls from Hasbro are a lot of fun and a nice way to celebrate some classic Disney characters without repeating the same 12 Disney Princess characters again. You can see more of each doll, including the hidden reveals through the magic mirrors, in our unboxing video. 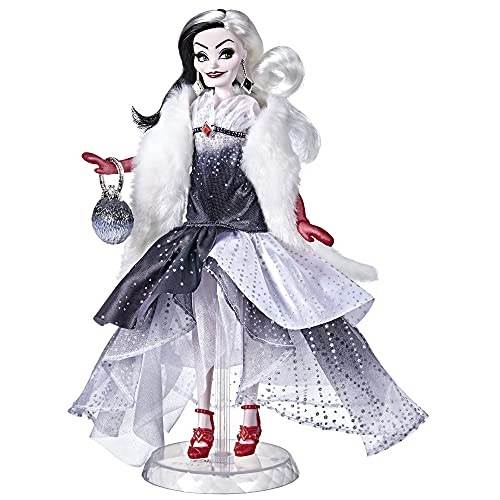 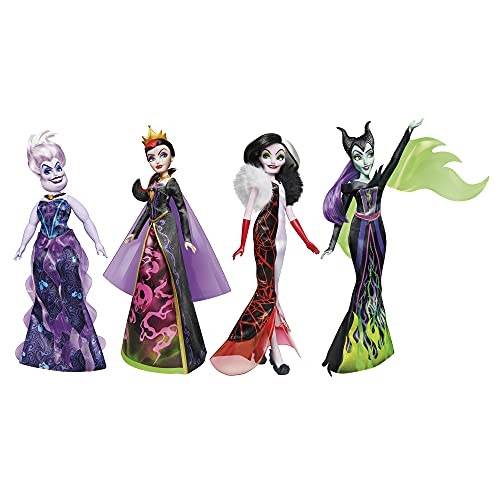 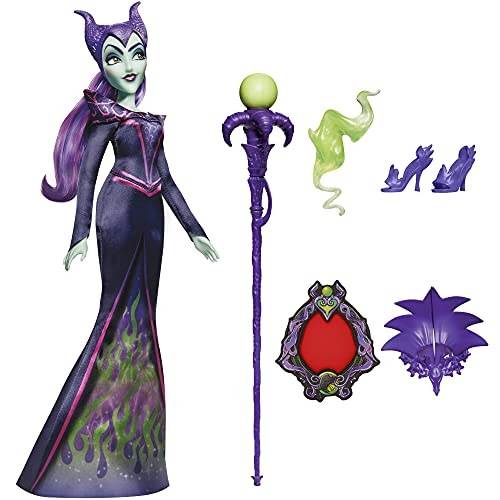 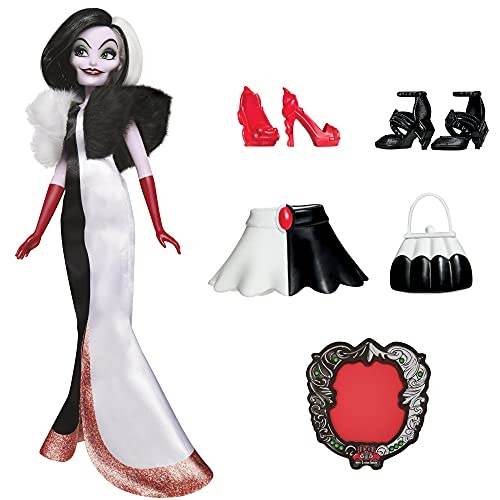 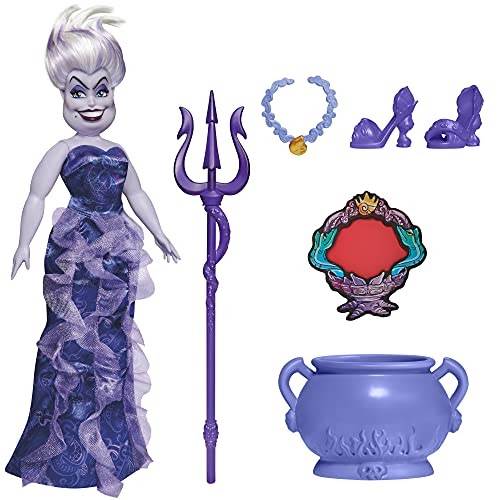