Are you looking for a way to unwind and relax this weekend? Disney Channel’s new episode of Gabby Duran and the Unsittables is about just that. Here’s a recap of “Extreme Ruckus.” 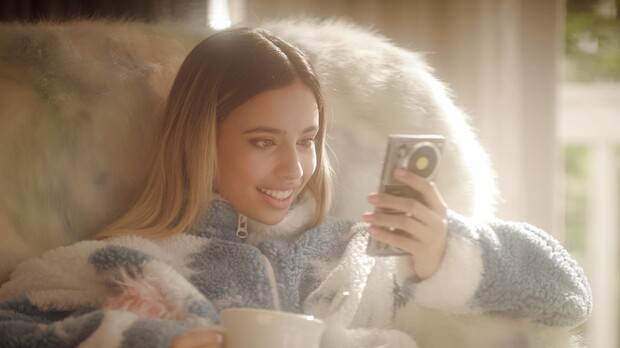 It’s time for Gabby’s annual stay-fresh refresh, a 48-hour time-off period where all she does is relax, eat cereal, scroll on her phone and watch a British baking show. She says it’s how she stays fresh all year, but her plans are interrupted by Principal Swift when he tells her “Ziggy is coming.” Ziggy is Jeremy’s best friend from Gor-Monia and when the two of them get together, they caus an “Extreme Ruckus.” Gabby says no, she needs her refresh.

At home, Gabby is all set up with her cereal and comfy robe in a recliner when suddenly two rabid wolves barge in and bark and growl at her, causing her to spill her cereal. The wolves transform into Gor-Monian blobs and then into the human forms of Jeremy and Ziggy. It turns out that Swift kicked them out and sent a note for Gabby saying she has to watch them. Ziggy instantly breaks a window.

Wes has a business card that says he is the “Executive Liason to Intergalactic Affairs” (it also lists his full name as “Wesley E. Presley”). He tells Olivia how important his job is, but to her it sounds like fixing squeaky chairs for aliens isn’t as important as he makes it sound. But when he asks her to be his “Junior Executive Liason to Intergalactic Affairs” to help with his workload, she agrees because she has nothing else to do. Swift hires them to clean up the basement, which is covered in goo and junk after the start of the ruckus. When Wes asks Olivia to run upstairs for some stain remover, the consols rings and he finds himself beamed before a council known as The Deletion. Earth is next on their list of planets to be destroyed and as the Senior Executive Liason to Intergalactic Affairs, he is the one to plead the planet’s case to be spared. He has two hours to prepare and he is beamed back just as Olivia returns to find him freaking out.

The ruckus ruins Gabby’s stay-fresh refresh and after trying to relax everywhere in her house, she begs Jeremy and Ziggy to leave her alone. They leave, but her relaxation is once again ruined when she gets a call from Jeremy who says “So, I kind of blew up.” She rushes to the alien pawn shop where Ziggy dared Jeremy to drink root beer, which always makes him blow up. He’s now just a head and when she asks where the rest of Jeremy went, Blurt appears with a tube full of goo. He says it’s his property now and it will cost $85,000 to get it back. She reminds him that Jeremy is royalty as an argument for why he should just give it to her, but instead Blurt ups the price to $85 million.

Wes rushes to Swift to tell him what happened and both he and Olivia think he’s making this up to make himself sound more important. Swift patronizes Wes by giving him an “Important” job, unclogging his toilet. It comes down to just two minutes before he will be beamed back and his short list of reasons to spare Earth at just “Hot dogs” and “Cold dogs.” But when he gets beamed back before The Deletion, he gives a heartfelt speech about Earth’s natural wonders but concludes that people are the reason the planet shouldn’t be destroyed. The beings don’t agree and start the countdown, but one of the beings stops it because their chair is squeaking and they can’t concentrate. Wes pulls out his chair grease and fixes it, which ends up being all it took to save Earth. He is zapped back.

It turns out that Blurt is also having a stay-fresh refresh weekend, relaxing in a lounge chair in the pawnshop. Gabby gets an idea and encourages Ziggy and Jeremy (who is just a head) to continue the ruckus there. Blurt is so flustered that he decides to just give them the can of Jeremy’s goo to get them to leave.

Jeremy and Ziggy have decided they need to rest after the energy they spent during their ruckus and they join Gabby for what’s left of her refresh. Jeremy apologizes for ruining Gabby’s weekend, but when they realize Ziggy isn’t in his chair, they see his head on the kitchen counter and he exploded like Jeremy did.

Olivia tells Wes that she’s done being his assistant and he agrees that the important job isn’t for everyone. Swift calls Wes upstairs to fix the toilet again and Olivia is left alone in the basement. The being from The Deletion who had the squeaky chair zaps in to return the tub of chair grease Wes left behind. “He is Earth’s greatest hero,” the being tells Olivia.

Gabby Duran and the Unsittables returns on Friday, November 12th with “Show-Dun-It.”

When Gabby discovers that her favorite sneakers have been mysteriously destroyed, she will not rest until she finds the shoe killer.