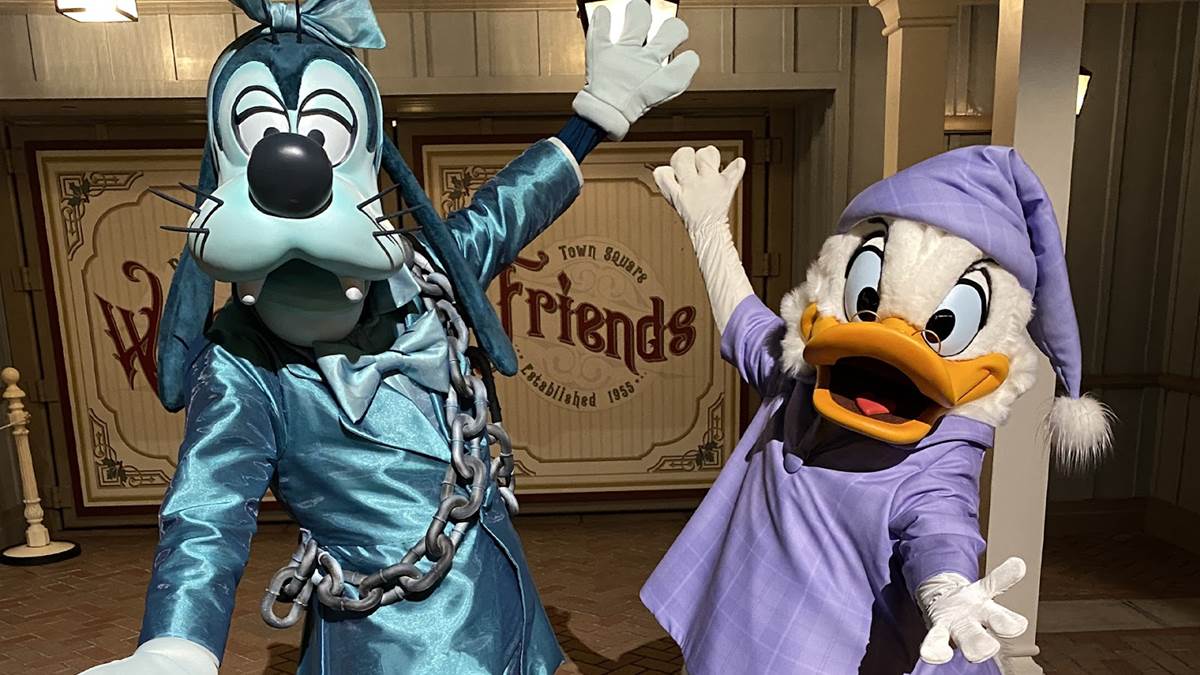 The holiday season has arrived at Southern California’s Disneyland Resort, and that means the inaugural evening of the Disney Merriest Nites after-hours ticketed event has come and gone. While four more nights have been scheduled for the event, these dates are all already sold out to guests.

With that in mind, let’s review the sights and sounds of Disney Merriest Nites, so those with tickets to the remaining events can better prepare, and so those who may have missed out on the celebration can get a better idea of what exactly it entailed.

Attendees of Disney Merriest Nites each received the above-pictured Christmas light lanyard with their Mickey-shaped credentials. The guide map for the event lists all the entertainment, characters, food, merchandise, and attractions available around the park during the party, such as the highly anticipated return of Disneyland’s “A Christmas Fantasy” holiday parade.

But the thing most people we interacted with were excited for about the event was the Muppets Christmas Caroling Coach, which saw our favorite felt-and-foam friends singing fun, familiar holiday tunes along Main Street, USA and into the hub.

Around the park, guests could pose for holiday photos in front of a variety of backdrops created by talented Disney WonderGround artists.

And of course, what would a Disneyland after-hours party be without characters? Mickey and Friends were decked out in their holiday best from Mickey’s Christmas Carol on Main Street, the Frozen gang hung out in Fantasyland, Donald Duck posed in front of his “Snow Fight” fort, Tiana perched above the crowd in New Orleans Square, Jack and Sally from The Nightmare Before Christmas posed on the balcony of The Haunted Mansion, Lilo found a spot in Adventureland, and Santa Claus himself met with children and their families in Fantasy Faire.

Entertainment around Disneyland was plentiful during Disney Merriest Nites, bringing the holiday spirit to just about every corner of the park.

The Island Duo in Adventureland brought a taste of the Pacific to the celebration.

And on the Mark Twain Riverboat, “Tiana’s Tinsel and Tunes” proved to be a soothing way to enjoy the Rivers of America in style.

Special holiday menu items like Coffee Nog and Christmas Churros were available around the park to satiate the guests’ holiday hunger.

For Disney Merriest Nites attendees who happened to be Magic Key holders, a special button was distributed next to the Rivers of America, along with a Freeform 25 Days of Christmas air freshener.

And who wants to leave a Disneyland event without picking up some exclusive merchandise? Disney Merriest Nites apparel, tumblers, phone cases, and pins were available for sale in Launch Bay, but only after joining a mobile queue and waiting for your turn.

Overall, I’d say everyone from Laughing Place who attended Disney Merriest Nites at Disneyland had a pretty wonderful time. The characters, photo ops, and entertainment offerings were all very creative, and we were impressed by the lighting effects and general holiday atmosphere of the park. It was unfortunate that due to technical difficulties, “it’s a small world holiday” was not available for the event’s opening night, but I would say that the mood around the party was overwhelmingly positive despite that setback.

Unfortunately tickets for future dates of Disney Merriest Nites at Disneyland are completely sold out, but as the park’s official website states, “You can still enjoy a merry menagerie of attractions, entertainment, dining and other special events during the Holidays at the Disneyland Resort.”