Movie Review: Disney’s “Encanto” is Beyond Charming Thanks to Its Gorgeous Animation, Toe-Tapping Music

Walt Disney Animation Studios’ 60th feature has arrived, continuing a legacy that has thrived for over eight decades and continuing to expand the tradition’s diversity with a story set in the South American nation of Colombia. With Encanto, directors Byron Howard (Bolt, Tangled, Zootopia) and Jared Bush (screenwriter of Moana) have delivered a lively and colorful tale about a family blessed with a series of magical gifts, each one more impressive than the last. 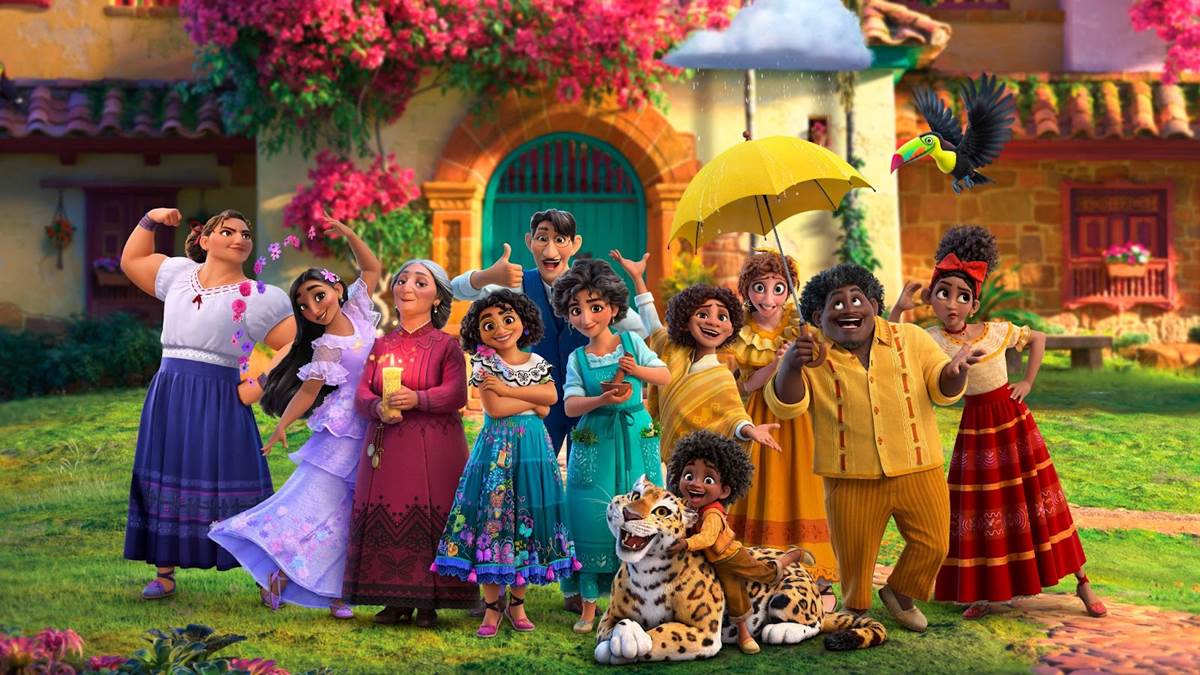 We’re given a basic version of the Madrigal clan’s backstory pretty early on in Encanto, though more details are filled in later as our protagonist Mirabel (voiced by Stephanie Beatriz of Brooklyn Nine-Nine fame) discovers more about her enchanted household’s origins. They live in a sentient “Casita” that shuffles its own floorboards, shutters, and staircases to help them move about their day, and when each of the matriarchal Abuela’s (genuine Colombian actress María Cecilia Botero) direct descendants come of age, they are bestowed with a unique power… all of them except the hapless Mirabel, that is. Hamilton creator Lin-Manuel Miranda has composed eight original songs for this film, and I’d say they’re all pretty close to surefire hits, but one of my favorites is the tune that Mirabel sings at the top to introduce the Madrigals and tell us about each of their gifts. There’s her mother Julieta (Angie Cepeda), who can heal wounds with her cooking, an aunt named Pepa (Carolina Gaitan) who controls the weather with her tempestuous emotions, and an uncle Bruno (John Leguizamo) who mysteriously disappeared after his power to see the future caused a rift among his relatives. Mirabel’s sister Luisa (Jessica Darrow) is unnaturally strong, and her other sister Isabela (Diane Guerrero) is impossibly perfect, leaving blooming flowers in her path behind her wherever she goes. There are cousins with super-hearing, shape-shifting abilities, and so forth. The list goes on, and everyone knows their own purpose in the Madrigal tribe, but the movie is really about Mirabel finding hers. On a special evening celebrating her young cousin Antonio’s (Ravi Cabot-Conyers) gift-bequeathing ceremony, Mirabel receives an ominous vision of dark things to come for the Madrigals, and must investigate what really happened to Bruno in the past in order to prevent this terrible fate from becoming a reality later on. Along the way, all the family members get their moments to shine, either by performing their own songs– Luisa’s toe-tapping number “Surface Pressure” is bound to be another fave– or having songs sung about them. Beyond the exquisite soundtrack, the gorgeous animation, production design, and overall art style on display in Encanto is going to have audiences’ eyeballs glued to the screen in anticipation of the next vivid, dynamic wonder to be revealed before them. I could spend hours gushing about the expertly rendered visuals in this dazzling spectacle, but instead I’ll just encourage you to see it for yourself. Story-wise, it’s a heartwarming tale about the bonds of family that neatly side-steps some tired Disney traditions like too-obvious villains and sugary romance, opting instead to convey a powerful message about being one’s true self instead of what others have come to expect from you. And as a complete package, Encanto feels unique and consistently entertaining enough to become an instant classic, worthy of its place on the shelf next to 59 other beloved Walt Disney Animation Studios films, with plenty more sure to come.