National Geographic’s most successful scripted series to date, The Hot Zone, returns for an all-new anthology season with The Hot Zone: Anthrax. Chronicling the 2001 bioterrorism attacks, this new season isn’t just about stopping the spread of a deadly virus, but also finding and capturing the culprit. Overshadowed by the larger terrorist attacks of 9/11, viewers will find that they don’t know as much about this story as they think they do. 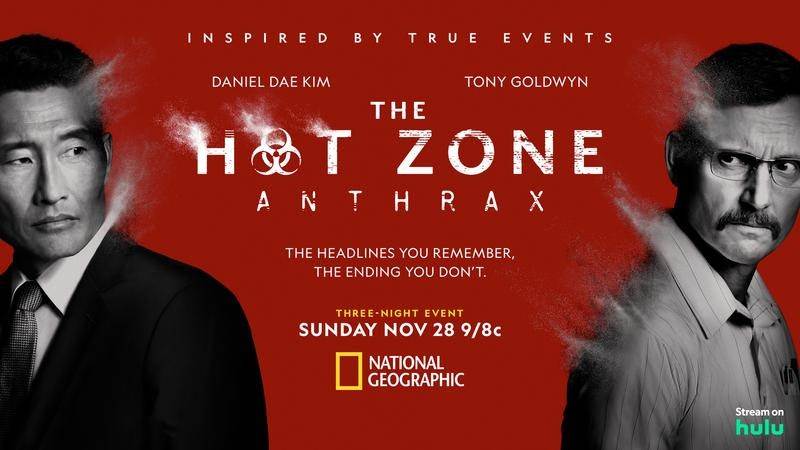 One week after 9/11, media organizations receive powdered envelopes that make people deathly sick. FBI agent and microbiologist Matthew Ryker (Daniel Dae Kim) is the first to identify what it really is, anthrax. Among those assisting the case is Dr. Bruce Ivins (Tony Goldwyn), but with few leads in the case, anyone with knowledge of anthrax becomes a prime suspect.

The brilliance of The Hot Zone: Anthrax is that it presents viewers with the same amount of information that Matthew Ryker had, turning you into an armchair detective trying to solve the case right along with him. Over the course of the six-episode series, you’ll go through every twist and turn in the case while also meeting the victims of the deadly white powder.

Tony Goldwyn disappears in the character of Dr. Bruce Ivins, becoming hard to recognize at times. Performances are strong across the board, with Daniel Dae Kim showcasing his skills at carrying another series as the central character. The production spans multiple locations with the realism you expect from National Geographic, accurately transporting viewers back to 2001.

With all six episodes of The Hot Zone: Anthrax airing across three nights on National Geographic, viewers won’t have to wait long to find out where this story will take them. With the real case having questionable outcomes, viewers will be left to make up their own mind about who is really at fault.

The Hot Zone: Anthrax premieres Sunday, November 28th, at 9/8c with double-episode airings over three consecutive nights. New episodes will be streaming the next day on Hulu.