Orlando’s newest restaurant is set to open in a matter of hours, and it has garnered a bit of attention since its the restaurant of Chef Richard Blais. If that name sounds a little familiar to you, it’s likely because you’ve seen him on Bravo’s Top Chef, where he appeared in the fourth season of the popular reality competition series, and returned several seasons later to Top Chef: All Stars, this time winning the coveted prize. A successful chef, restaurateur, James Beard nominated cookbook author and television personality, Blais has also been recently announced as the co-star of the new Gordon Ramsay / FOX cooking competition, Next Level Chef. Blais graduated from the Culinary Institute of America and trained at The French Laundry, Daniel, Chez Panisse, and el Bulli. Before his new restaurant, Four Flamingos, he most recently opened Ember & Rye at the newly renovated Park Hyatt Aviara in Carlsbad, California and took on the role of Culinary Director at the newly opened San Diego Symphony performance space, The Rady Shell at Jacobs Park. He has also penned a number of cookbooks for the home chef, Try This at Home: Recipes from My Head to Your Plate, and So Good. The latest in his series of accomplishments is the new Four Flamingos restaurant at the Hyatt Regency Grand Cypress, near Walt Disney World in Orlando, Florida. 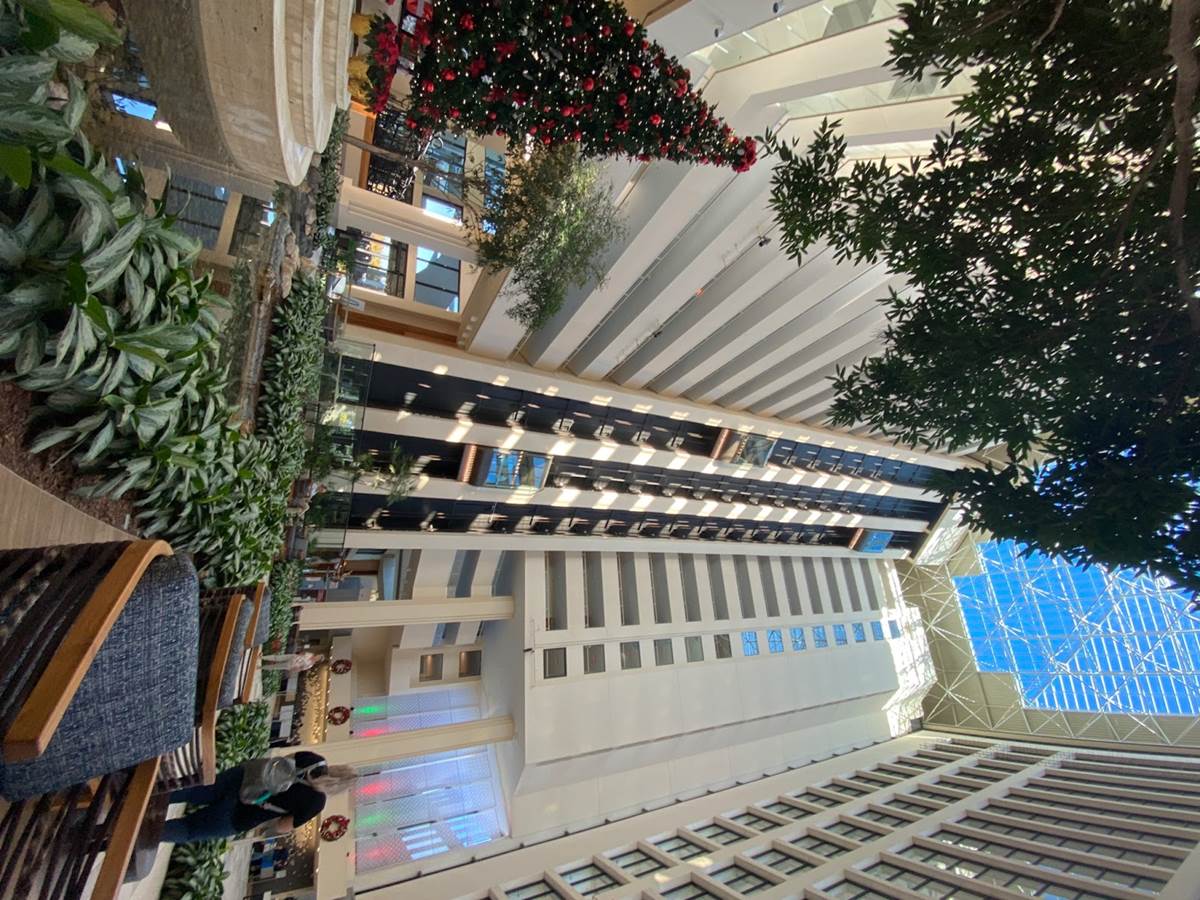 If you’re familiar with the resort, Four Flamingos has taken over the former Hemingway’s, and now features a fresh, yet nostalgic tropical look with experiences designed to provide guests a look into the kitchen and prep process. Even Chef Blais pointed out during a tour that he liked the open idea, wanting to retain that from the former Hemingway’s establishment. That way, the kitchen can get a sense of the energy in the dining room, and that diners can see that their meal is being cooked by real people, freshly made. As for the name of the restaurant, it comes from the four species of flamingo native to the Americas and the bird’s tendency to gather and feast in groups. Four Flamingos features cuisine inspired by tropical flavors and ingredients from Florida, including native fruits, vegetables, seafood and more. Guests can “flock” to Four Flamingos for a menu filled with fresh Florida flavors, including stone crab, citrus, Mahi Mahi and more. Dishes will range from expertly selected pieces of seafood to signature steak cuts, offering the best of fresh-caught surf and fire-grilled turf. 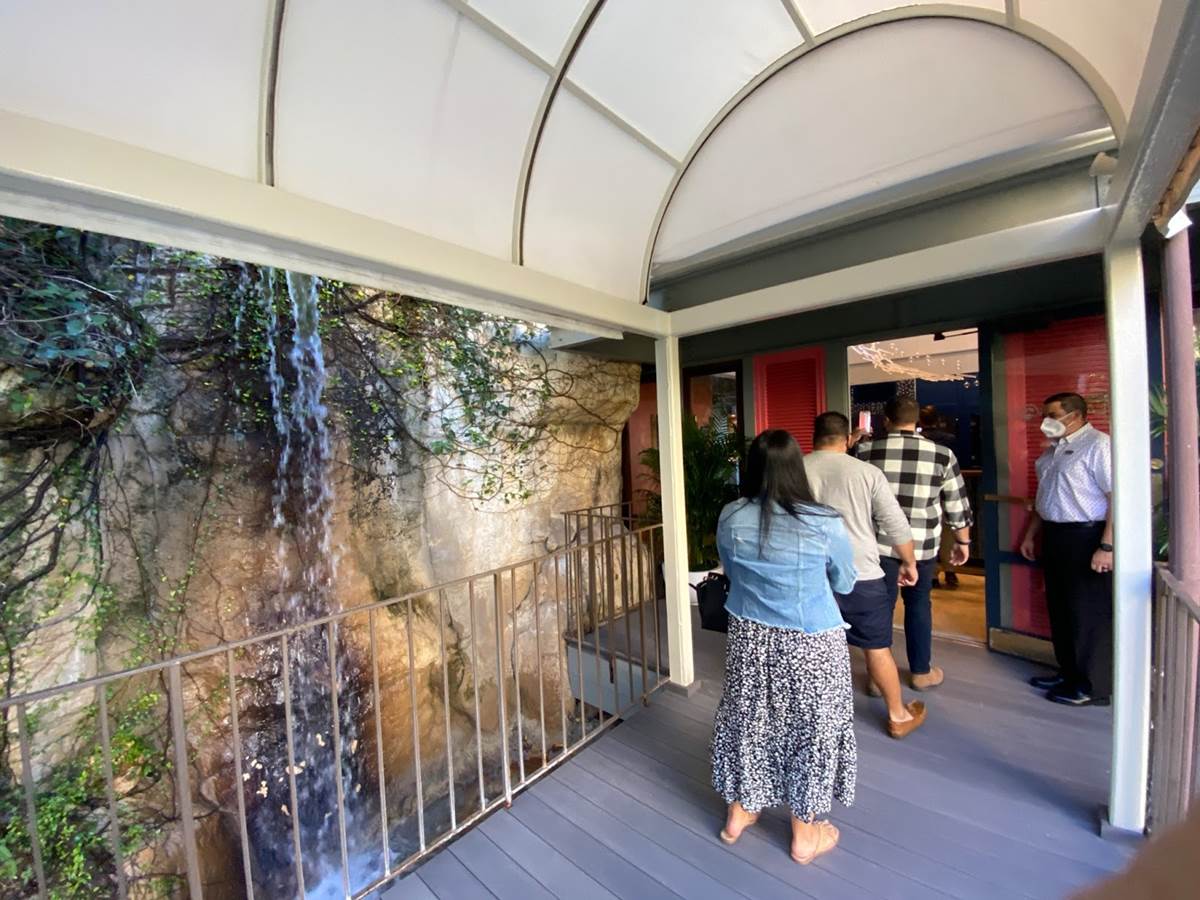 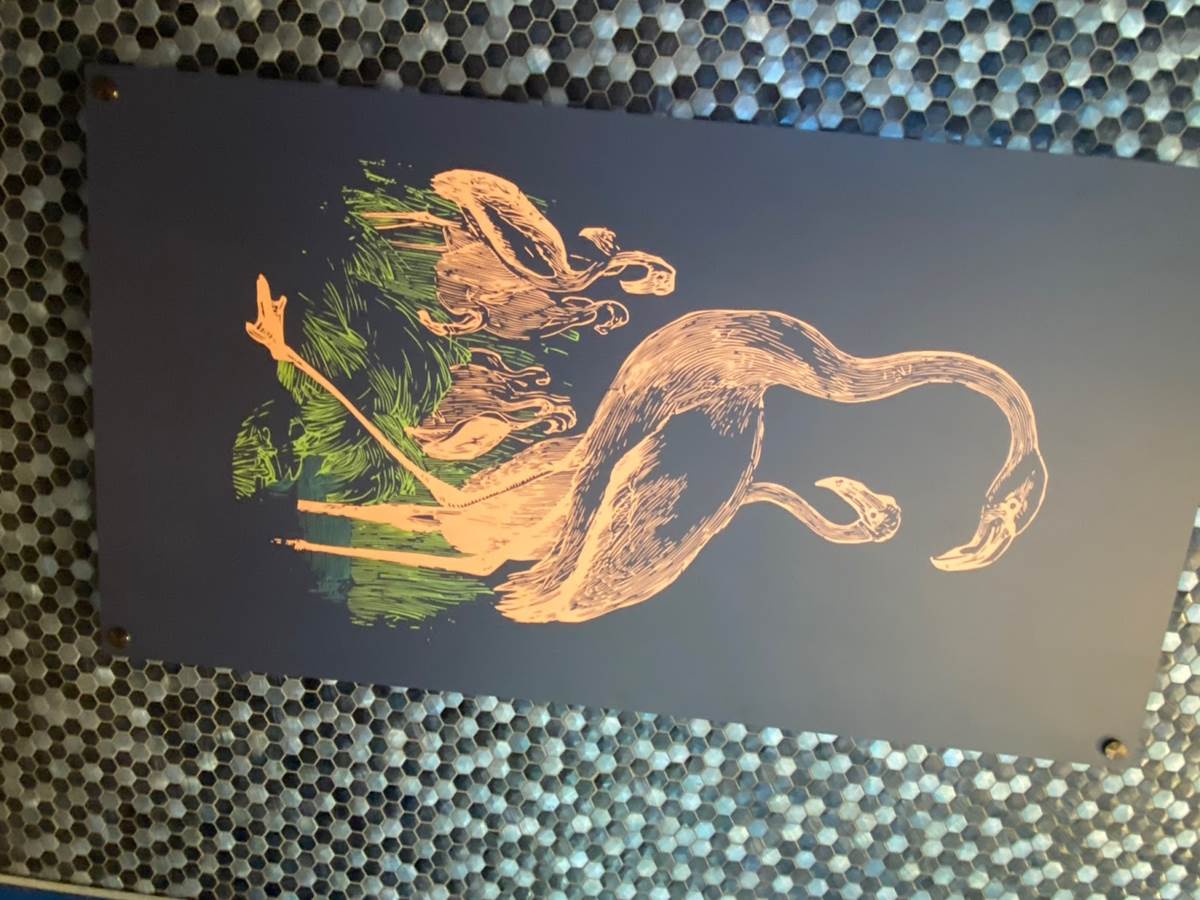 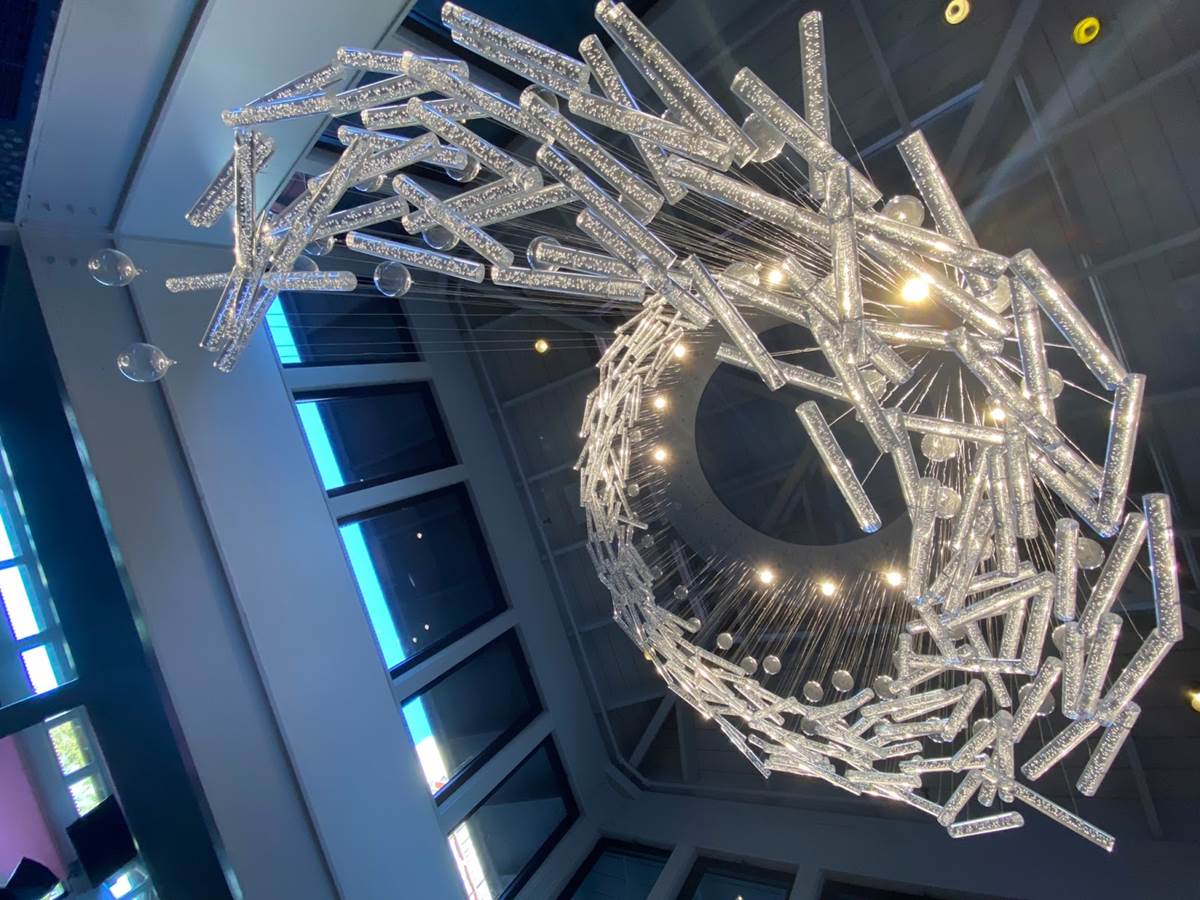 Chef Blais has also said that whenever possible, they try to get food from local farms and fisherpeople. He has even said that they’d rather get fresh caught Shrimp from someone who had them in the back of his truck in a cooler, then have something frozen shipped in. You can check out our interview with Chef Blais where he discusses this further at the bottom of the page.

In this same interview, Chef Blais also discusses an aesthetic that he brings to this restaurant, where he wanted all the flatware to look homey, something you might find at your grandparents house. It was one of those things that once he pointed it out, you noticed it on every dish that came out. 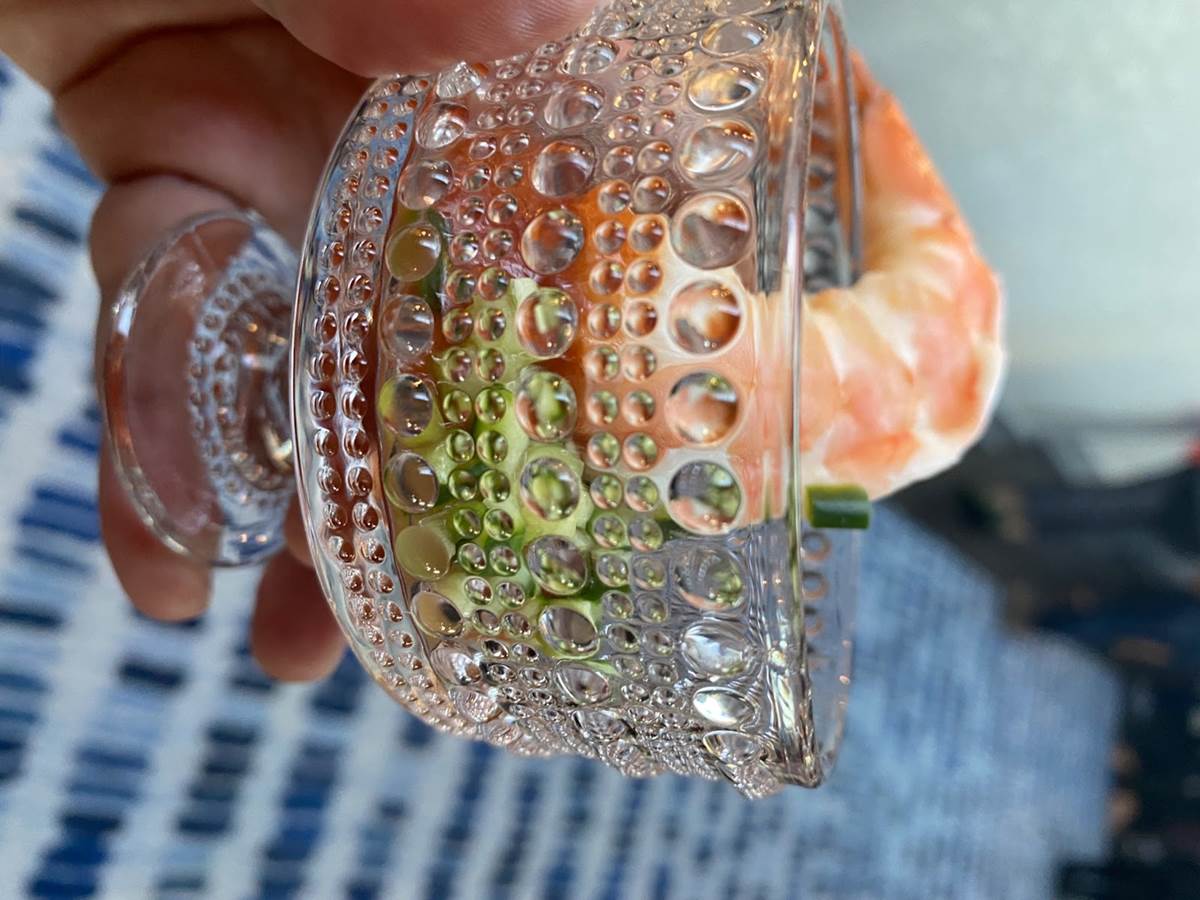 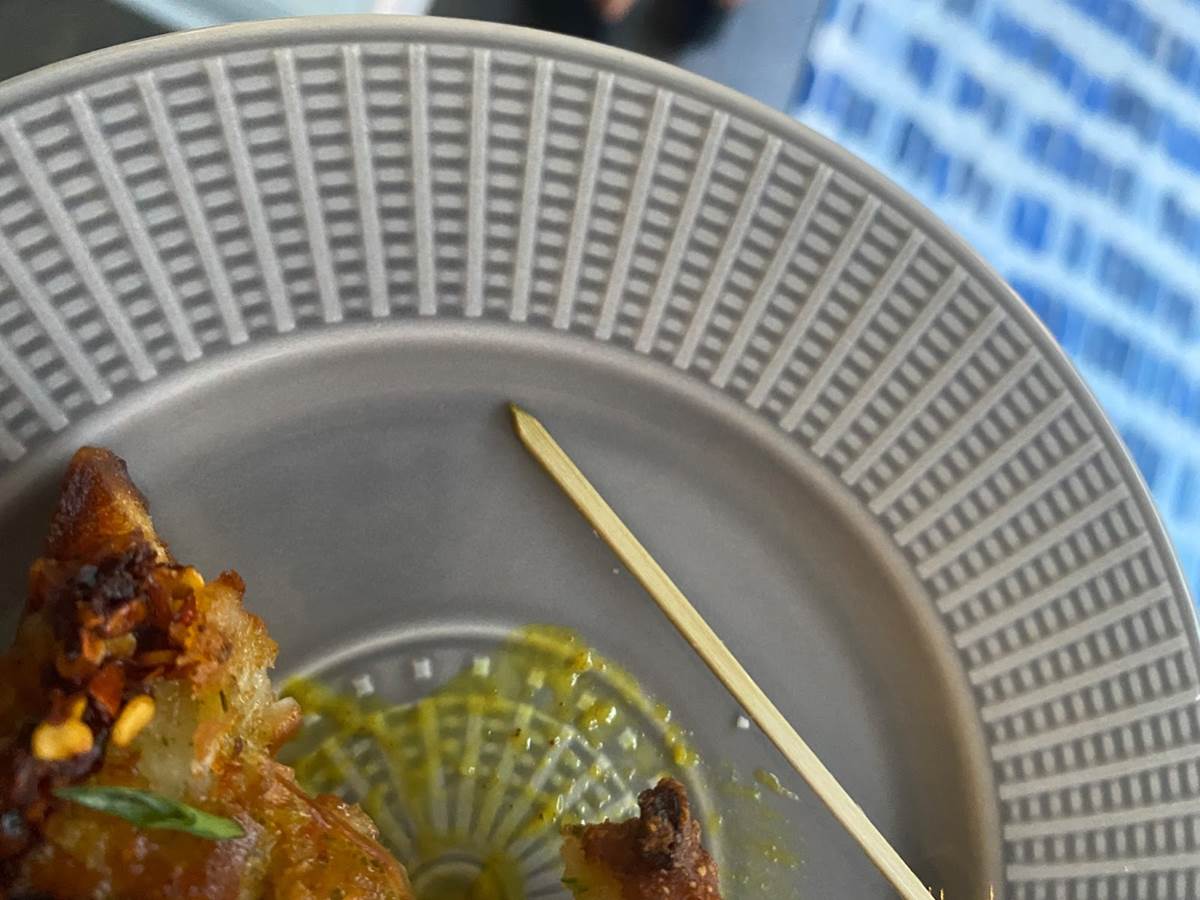 Chef Blais is also known for some scientifically infused culinary creations, and some of the offerings at the Four Flamingos keep this spirit. “Scented Smoke Bubbles” can be found on the Snapper Ceviche, which comes with a tableside presentation where in a smoke bubble is blown with a citrus oil, and once the guest pops the bubble, the aroma is set free and gives diners a taste of the food before it even hits their mouth. Ice Cold Oysters and Pearls with a Spicy Hibiscus Sauce sound delicious on paper, but become even more appealing when you realize how cold “Ice Cold” really is, as that spicy hibiscus sauce is hit with liquid nitrogen, turning the sauce into small orbs that will melt onto the oysters. Fans of Dippin’ Dots at theme parks around the country may think this looks a little familiar. Other appetizers and snack plates include a Shrimp Cocktail with some of the biggest shrimp we’ve seen this far from an ocean, conch hushpuppies, and the dish that (at this moment in time anyway) Chef Blais thinks the restaurant will come to be known throughout Orlando for, Coconut Shrimp Toast, with chili and green onion.

Over at the bar, the restaurant’s mixologist has come up with some signature cocktails, including the aptly named “Fifth Flamingo,” made with Siesta Key Rum, Tempus Fugit Creme de Noyeaux, Guava, Pineapple, and Raspberry-Orgeat syrup. That same scientific spectacle that applies to some of the dishes can also be found at the bar as well, with the “Roseberry Bomb,” strawberry-infused Ketel One Vodka, Creme de Peche, Citrus, and a blast of rosemary. Those same smoke bubbles from earlier are back, this time with the aroma of Rosemary that is burst by a small stick of the plant. Entrees at the restaurant include Florida-inspired flavors like Linguini & Conch with Chilies & Miso Butter, or a Swordfish Prime Rib – "Neptune's Cut" – with Black Lime, Black Pepper, andGarlic. A Mojo Grilled Chicken with Crispy Potato and Coconut Horseradish RBQ and other options round out the menu, as does a Dry Aged Beef Ribeye that’s 22 oz. and dubbed “Thor's Hammer” with Jalapeño Chimichurri. Heads up though, this specialty cut of beef will set you back $120.00

Four Flamingos is ready to welcome guests through its doors when they open soon, and the lights shine pink (like a flamingo!) all the way up through the beautiful gardens of the Hyatt Regency Grand Cypress leading to the new restaurant. A beautiful new mural, done by a local artist, can be found on the pathway along the way. 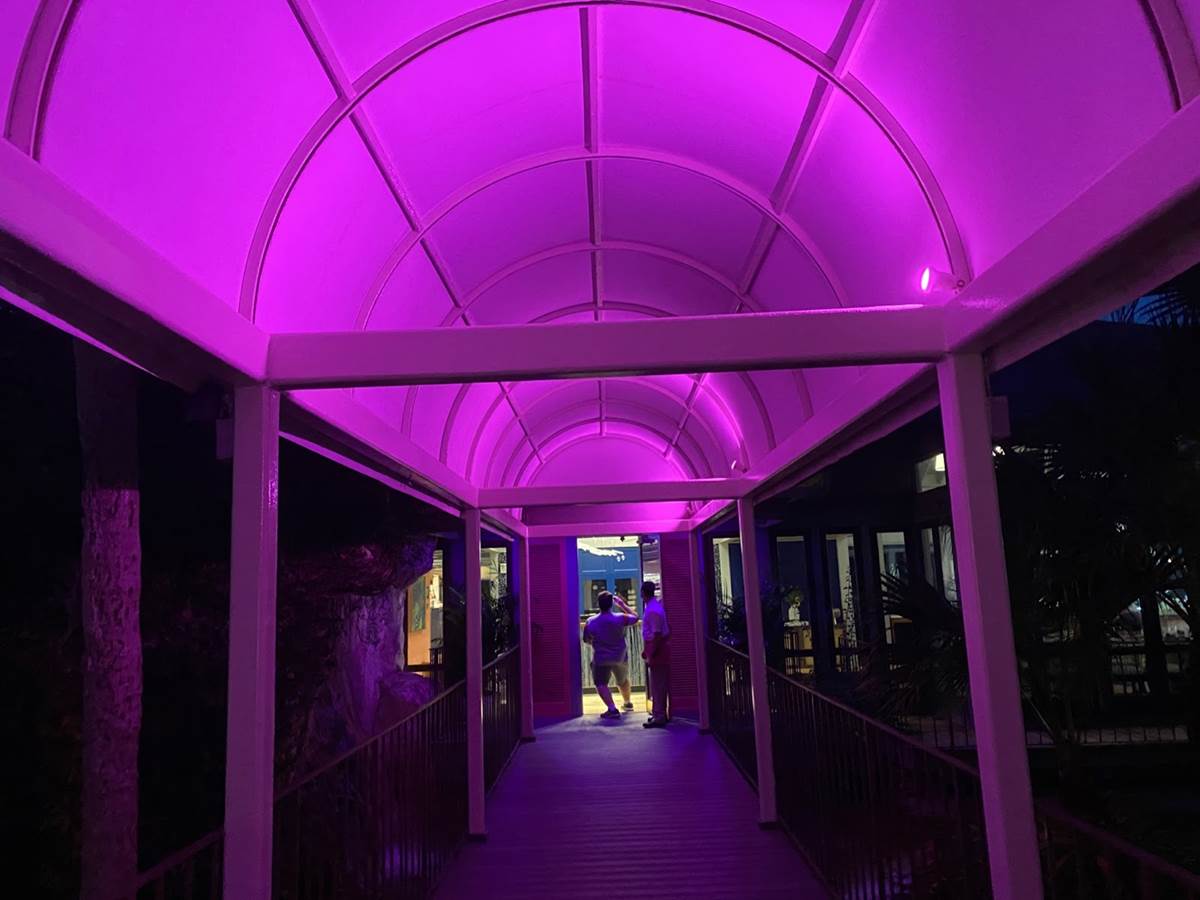 Even the hotel’s marquee out front now sports the new restaurant, beckoning drivers and passersby inside to try out the delicious flavors within. Be sure to check out our interview with Chef Richard Blais below, and head down even further to check out a full menu for Four Flamingos. Four Flamingos is set to open December 2nd at 5:00 PM at the Hyatt Regency Grand Cypress, adjacent to the Walt Disney World Resort. TV Recap: “Queens” Sees the Girls Adjusting to a Member’s Absence in “Bars”
Video: Ring in 2022 with the First Performance of Magic Kingdom’s Fantasy in the Sky New Year’s Eve Fireworks
Could a New “Giga Coaster” Be Coming to Knott’s Berry Farm?
2021 Disney Person of the Year: Ken Potrock
This Friday’s “20/20” to Focus on the Tragic Murder of Molly Watson