Why remake West Side Story? Well, why not? Sure, the Tony-winning 1957 stage musical already begat an Oscar-winning film adaptation in 1961, still regarded as one of the best movie musicals of all time. But the production was also produced under socially acceptable conditions of the time, with a mostly white cast of characters portraying Latinx people. Not only has societal progress paved the way for a more authentic adaptation, but technology has improved to a point where there are new ways to bring the story to life that simply didn’t exist before.

Why Steven Spielberg? Well, why not? The visionary filmmaker who helped redefine the term “Blockbuster,” eternally shifting it away from movie musicals with action/adventure/sci-fi classics, seems like a poetic choice to restore the genre. As a lifetime fan of movie musicals and Steven Spielberg, the marriage feels written in the stars. His expert vision for framing scenes and creating interesting bits of action between his performers lends itself perfectly to the project. When the credits roll, you’ll wonder why we as moviegoers have been deprived of his skill with the musical format for so long.

Yes, West Side Story is still William Shakespeare’s Romeo & Juliet set in New York City in the late 1950s, but Tony Kushner has found ways to enhance the text to bring new elements to light. The Jets and Sharks aren’t merely tough-looking chorus boys, but feel like fleshed-out characters, a monumental feat considering not many of them get much individual attention. One of the biggest tweaks is the character Valentina, played by the legendary Rita Moreno who had a star-making turn as Anita in the original film. Replacing Doc from the original, Valentina serves not only as a parental figure to Tony, but also a cultural bridge for him to try and impress his Puerto Rican love interest, Maria. As with Shakespeare’s tale of star-crossed lovers, the story still spans just a couple of turns of the sun.

New choreography is provided by Justin Peck, with plenty of homages to the original dances created by Jerome Robbins. Yes, the Jets and Sharks still snap their fingers with menace, but one of the biggest surprises of this version of West Side Story is how often the dances feel like a real fight. In fact, there are several instances of dances that transition into an all-out brawl, or “Rumble,” as the case may be. One of the things that works so well about this adaptation is that it also eases the film audience into the dance aspects, exercising restraint until you’re used to the musical format and less likely to be taken out of the story by a big dance number.

The music, arguably the best part of any production of West Side Story, has been lovingly recreated while marginally enhanced. The entire score, arranged by David E. Newman and conducted by Gustavo Dudamel, celebrates the work of Leonard Bernstein and Stephen Sondheim in the grandest way imaginable. The score is big, sweeping, and epic and audiences would be wise to seek out theaters playing the film in Dolby Atmos to get the full effect. It may be the Spielberg connection, but the score also feels at times like it could have been composed by John Williams. He is credited as a consultant on the project and, fun fact, he was a pianist on the score of the original 1961 film. 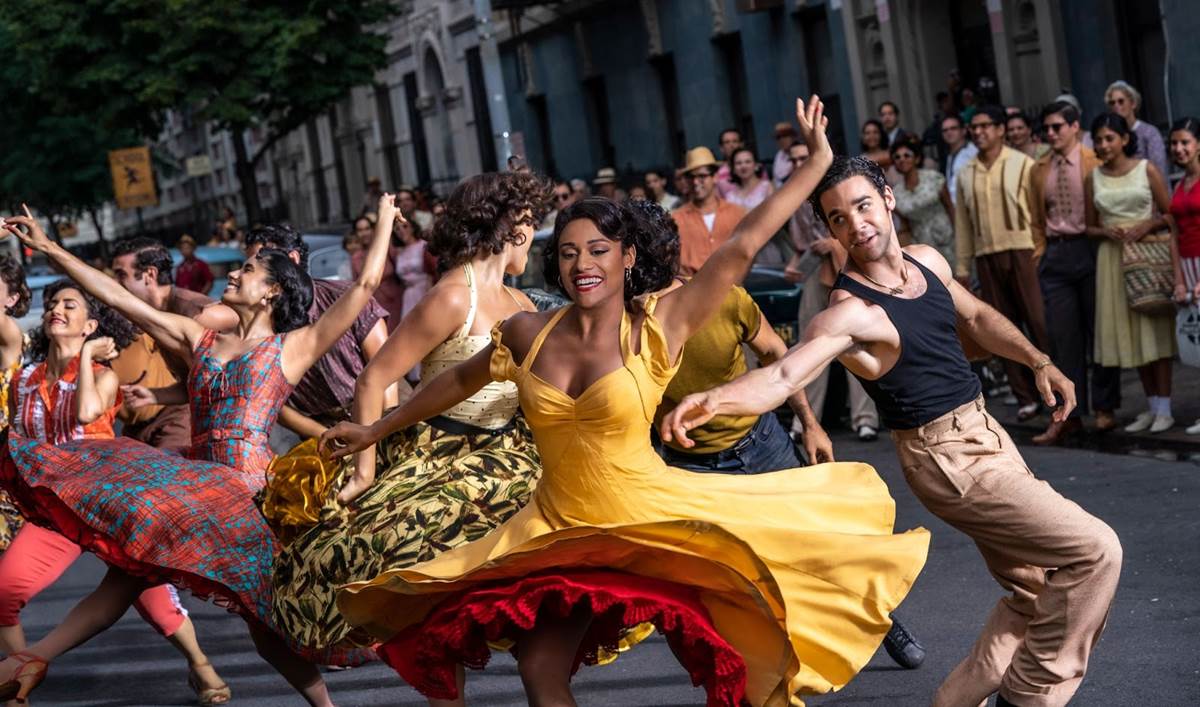 Acting performances are stellar across the board, but one of the most striking aspects of this version of West Side Story is the way the faces and eyes of the actors are lit. The eyes always seem to pop, drawing your own to each actor’s in a new way. Ansel Elgort (The Fault in Our Stars) and newcomer Rachel Zegler (cast as the lead in Disney’s live-action Snow White and the Seven Dwarfs) shine as Tony and Maria with undeniable chemistry. But as in the original film, it’s Anita who steals the show, played here by Ariana DeBose (Schmigadoon!).

Were it not for a few obvious digital set extensions, sweeping flyover shots, and modern camera work, you might watch Steven Spielberg’s version of West Side Story and believe that it was filmed in the late 1950s. It feels like a more authentic representation of what a Romeo & Juliet story set in this time and place really would’ve been like, complete with a few elements that would’ve been taboo on film in 1961 (marijuana references, a transgender character, derogatory terms). To anyone who doubts its need to exist, when you see this version of West Side Story, you’ll be convinced that not only did it need to be remade, but that Steven Spielberg was the right person to do it.

I give West Side Story 5 out of 5 former Billy Elliot’s as Jets.

West Side Story debuts December 10th only in theaters from 20th Century Studios.