The Museum of Neon Art in Glendale, California held a virtual Zoom presentation with Disney Imagineer Steve Spiegel last night, and I was lucky enough to attend. I thought I’d share some of the interesting facts about neon signage at the Disney Parks that Steve talked about in his presentation. The presentation went over the history of neon lights usage in the Disney Parks and how they can be used to enhance storytelling. In addition to being a Disney Imagineer, Spiegel is a huge fan of neon art, so he was able to passionately talk about both. In his time working for the company, Spiegel has worked on projects such as Honey, I Shrunk the Audience, Star Tours: The Adventures Continue and Turtle Talk with Crush. He is currently a story lead for Marvel parks projects, such as the Iron Man Experience at Hong Kong Disneyland, WEB SLINGERS: A Spider-Man Adventure and Guardians of the Galaxy – Mission: BREAKOUT!

Spiegel set out on a search for the earliest neon sign used at Disneyland. His search first took him to the Disneyland Hotel, where a giant neon hotel logo was installed in 1963. Fun fact: The 16ft tall x 9ft wide letter “D” from the sign sold at auction for $80,000 to David Copperfield. Neon doesn’t appear on Main Street USA due to the area being set at the turn of the last century, and neon didn’t start to readily appear until the 1920s. The first neon sign inside Disneyland was the Starcade marque, which was installed in 1977. Neon was still seen as a reminder of seedy motels and casinos at the time, so it took a retro resurgence 10 years later to bring neon back in vogue. 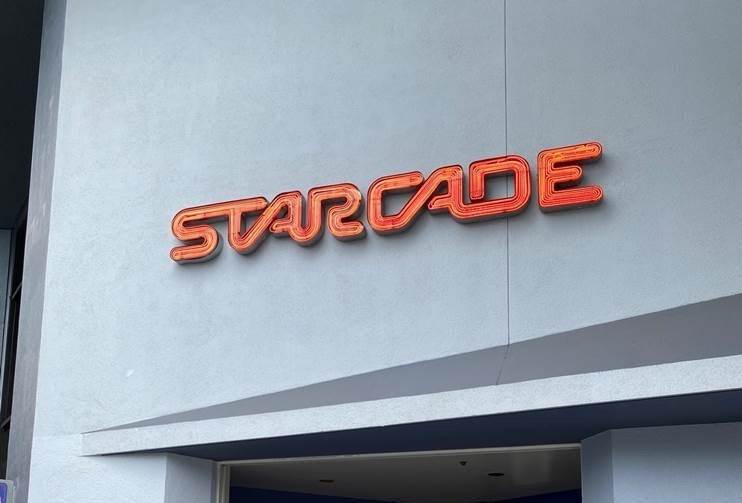 In 1987, Imagineer Tom Morris created the now iconic spaceman Mickey neon art on The Star Trader building in Tomorrowland. Tom became aware of neon art, but there was still a lot of resistance from within Disney, where some thought it could turn Disneyland into a second rate Las Vegas. Spaceman Mickey was created by Morris and perfected by animator Mark Henn. Tom figured it was a temporary stopgap, and was shocked to see it when he returned from opening Disneyland Paris in 1992. Spaceman Mickey still lights up Tomorrowland every night, and this alone shifted everyone’s attitude to neon. Spiegel then went on to talk about various neon projects, from Disneyland’s Star Tours and Innoventions, to the recreations of Hollywood buildings and neon signage at Disney’s Hollywood Studios. The highlight of neon on Hollywood Blvd. was The Great Movie Ride marquee, which was created completely out of neon.

EPCOT had a fantastic neon showcase when the park first opened, in the form of the Rainbow Corridor at the ImageWorks. This was the most neon in any one place in a Disney park, that is until Cars Land opened. The birthplace of neon was in the real city of Paris, so naturally, EPCOT’s France pavilion featured a neon sign at the former Bistro de Paris. While many more examples of neon in the parks were showcased, the absolute apex of neon in the parks is Cars Land, containing the largest concentration of neon. The land has a little of everything in terms of neon styles, and  the neon was actually made a year in advance of installation. Of course, the neon lights switch on at night in fantastic fashion to the tune of “Sh-Boom.” Steve shared the video below featuring Imagineers Mark Panelli and Laurel Scribner talking about the creation and installation of the neon signage in Cars Land:

And finally, Steve talked about the newest neon project at the Disney Parks: Mickey & Minnie’s Runaway Railway. This incredible marque pays tribute to premiere signs of Hollywood’s heyday. The Imagineers knew they wanted a neon Mickey, and this marquee continues the look of neon down Hollywood Blvd., as a beacon to draw you to the Chinese Theater. Steve has helped the Museum of Neon Art in retrieving old neon signs, including the Flynn’s Arcade sign that was used at ElecTRONica in Disney California Adventure. He’s thinking about working on a book all about neon, once he completes work on Guardians of the Galaxy: Cosmic Rewind at EPCOT.

Be sure to follow Steve Spiegel on Instagram at @colorbyspiegel as he documents worldwide neon art. If you’re in the Glendale area, be sure to visit the Museum of Neon Art for an impressive collection of treasures of neon past.