Touchstone and Beyond: A History of Disney’s “The Hand that Rocks the Cradle”

It’s 1992 and cinema was about to remind us that the true terror in your home comes from those that you invite into your home. The Hand that Rocks the Cradle was a thriller that had staying power and inspired multiple copycat films. Disney’s surprise hit killer nanny story had a talented cast and a brilliant director. 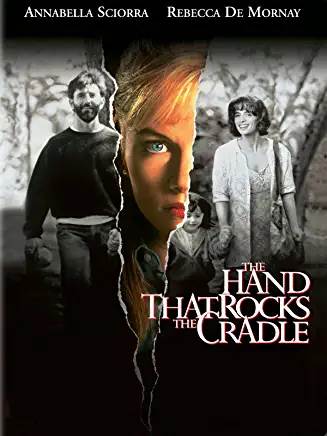 Claire and Michael are a happy family expecting their second child. When Claire visits her new physician, Dr. Mott, Claire is assaulted by him, which leads to her filing a complaint with the medical board.

While more patients come forward, Claire moves on from the assault and has her baby. Dr. Mott commits suicide which devastates his wife Peyton, causing her to lose her own baby. Many months later, Peyton is grieving her husband and lost baby and wants revenge. Claire and Michael are looking to hire a nanny and Peyton gets the job.

Peyton quickly gets comfortable in her new role and starts to slowly undermine Claire. At first, they are small acts of deceit, which has Claire questioning her own sanity. Causing tension between Claire and Michael, Peyton alienates Claire from the baby and her daughter Emma, as well as getting their handyman Solomon fired. Peyton kills the family friend Marlene and tries to kill Claire by emptying her asthma medication.

A final confrontation is inevitable, and the last battle proves that no matter how angry Peyton is, Claire is no pushover for a vengeful nanny.

Annabella Sciorra is great. She plays a well-balanced lead who seems to be the most human of protagonists for this type of film. Sciorra’s Claire has her faults and frailties but makes for a compelling lead opposite Rebecca De Mornay’s villain.

Rebecca De Mornay is a fantastic villain. She plays the rage fueled Peyton with brilliance that is not overstated, but rather underplayed. Peyton seems normal, which is why she can blend in with the family. Her tactics for turning the family against Claire are not complicated, but rather simple which makes the deviousness of her actions terrifying. De Mornay channels her rage in specific moments that lets the viewers know that Peyton is a monster and someone to be afraid of.

Matt McCoy plays Michael well. He’s the perfect husband, but McCoy doesn’t let his character overshadow Claire. Ernie Hudson as Solomon ties up the family dynamic well and lets the viewers see greater depth to the family with their treatment of Solomon.

The fact that the movie is directed by Curtis Hanson only increases the value of the film. Hanson had a talent for making intensely personal but elaborately thrilling films stand the test of time. Hanson turned Meryl Streep into an action hero with The River Wild, made L.A. Confidential possible to be told on screen, and brought to the big screen the life of Eminem. Curtis Hanson was a genius that the world lost far too young.

Julianne Moore’s Marlene is the only character who has little to do but die. Her death by greenhouse is one for the record books.

I guess the only thing that I would question is, could Claire and Michael really be friends with Marlene if she was Michael’s ex-girlfriend? That just seems to be a recipe for trouble in that marriage.

The Hand that Rocks the Cradle is a great film. It’s not Citizen Kane, but it is a compelling thriller that stands up twenty-nine years after its release. The cast is excellent, the story is simple, and the thrills are not cheap or scary but perfectly normal with a hint of real-world danger.

The Hand that Rocks the Cradle gets a “Level 4 Streamy Award”. Put it on your television and enjoy the psychological terror.

Christmas is almost here, and what better way to deck the halls, than with Touchstone Pictures 1994 Denis Leary comedy The Ref.