There’ve been just a handful of examples of The Walt Disney Company dipping into its film vault for 4K Ultra-HD releases, with Disney Home Entertainment largely limiting the format to just new films. While Universal and Warner Bros. have heavily supported the format, releasing some of their biggest classics in 4K, Disney’s 4K releases have been limited to Pixar, Marvel Studios, Star Wars, and a small selection of Walt Disney Animation Studios films, none older than 1989. Thankfully, they seem to be catching on and now 4K collectors can add Who Framed Roger Rabbit to their 4K movie collection. 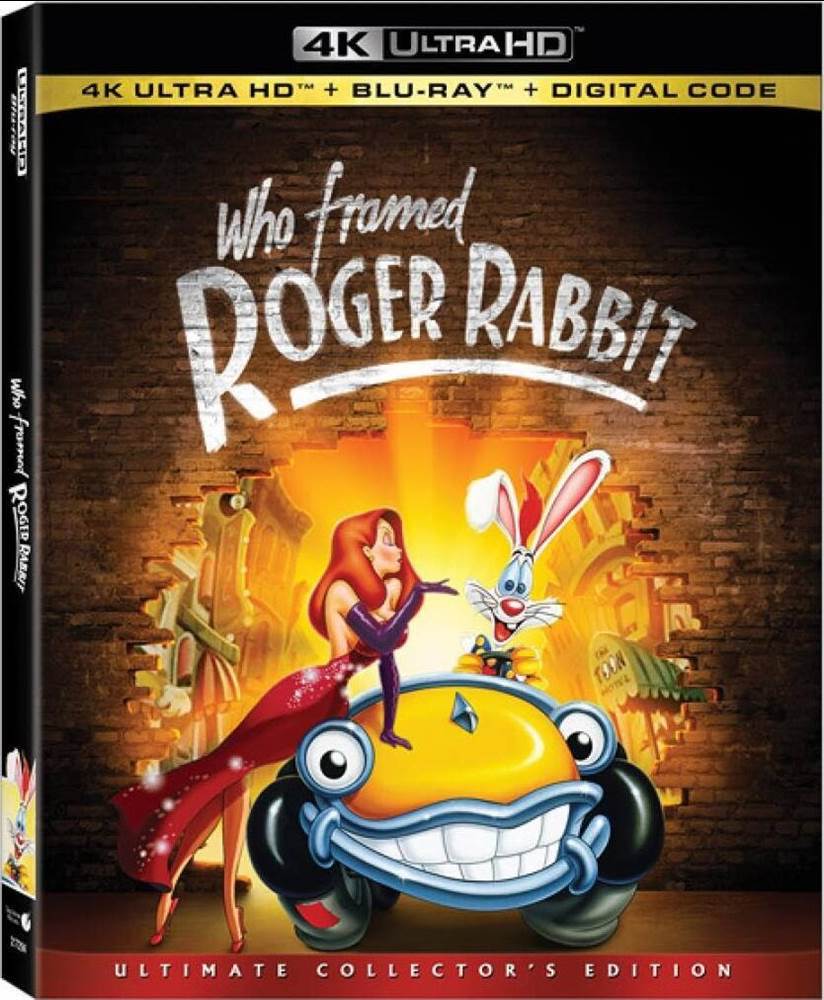 Bob Hoskins stars as Eddie Valiant, a private detective in a version of 1940’s Hollywood in which cartoon characters are real and cross over via a tunnel to Toontown. When the Acme Corporation owner is murdered following pictures Eddie captured of Jessica Rabbit (voiced by Kathleen Turner) having an affair with him, cartoon star Roger Rabbit (voiced by Charles Fleischer) becomes the prime suspect. Eddie soon finds himself caught up in an animated mystery as he helps Roger evade the long arm of the law, Judge Doom (Christopher Lloyd).

Released in 1988, Who Framed Roger Rabbit is thus far Disney’s oldest 4K Ultra-HD release, animated or otherwise. Film purists will be pleased to know that the film still looks like film, with grain present in all frames, while still presenting more detail than the 2013 HD release. The combo pack includes a Blu-Ray disc that has all of the same contents as the 25th Anniversary Edition, minus some outdated trailers. There was a missed opportunity to upgrade the three Roger Rabbit shorts to 4K as well, but at least the audio commentary is included on the 4K release, which also has a new Dolby Atmos audio mix.

What’s gained from the 4K release of Who Framed Roger Rabbit? For the animated sequences, the biggest difference from the HD Blu-Ray transfer is a wider color spectrum, although most of the animated sequences are done in a film noir style with a fairly muted palette. Where it really becomes noticeable are in the dark, inky blacks, and bright, vivid whites. The live-action footage reveals more detail than you’ve probably seen before, with fabrics and textures looking richer than on the old transfer. Ultimately, it’s a restoration that doesn’t try to make the film look like it was made yesterday with an overabundance of digital noise reduction, which often results in loss of detail.

The 4K release includes a new 5.1 surround Dolby Atmos mix, although the film predates surround sound becoming standard for films and as with the previous Blu-Ray, the sound field is mostly presented across the front three channels. Occasional sound effects and score fill the rear speakers, but it’s by no means an enveloping mix. Carried over from the Blu-Ray disc are a 2.0 descriptive audio track, French 5.1, and Spanish mono. The 4K release also adds a few languages not available on Blu-Ray, all of which are 5.1 – Castellano, Deutsch, Italiano, and Japanese.

The Audio Commentary bonus features is also available on the 4K Ultra-HD disc.

The 4K Ultra-HD release of Who Framed Roger Rabbit marks the first time the film has received new cover art since its original VHS/Laserdisc release, which features Roger and Jessica Rabbit with Benny the Cab. The package comes in a standard black case with disc holders on both sides, with only the 4K disc containing artwork. Inserts include a Movies Anywhere digital copy code (also redeemable for Disney Movie Insiders points) and a flier for Disney Movie Club. The initial pressing includes a slipcover (o-ring), which is flat with no embellishments.

Experiencing Who Framed Roger Rabbit on 4K Ultra-HD doesn’t fundamentally change your enjoyment of the film, but it does bring out a few details you can’t see in the previous HD treatment. While this same 4K transfer is streaming on Disney+, it can’t match the consistent quality of the on-disc release, which also won’t hog internet bandwidth in your home. If you have a 4K home theater and are a Disney movie collector, the decision to upgrade is really a no-brainer. If you’re on the fence about upgrading your copy, consider supporting this release if you’re hoping that Disney will tap into their library of classic films, which includes Oscar-winners like Mary Poppins and 20,000 Leagues Under the Sea plus 20th Century Fox classics like Rogers & Hammerstein’s The Sound of Music and Titanic.