The Orlando Magic Take Fans to a Galaxy Far, Far Away with Star Wars Night

Tonight was Star Wars Night at the Amway Center in Orlando as the Orlando Magic took on the Miami Heat. The night was filled with not just exciting NBA action, but also characters, trivia and even a celebrity appearance. 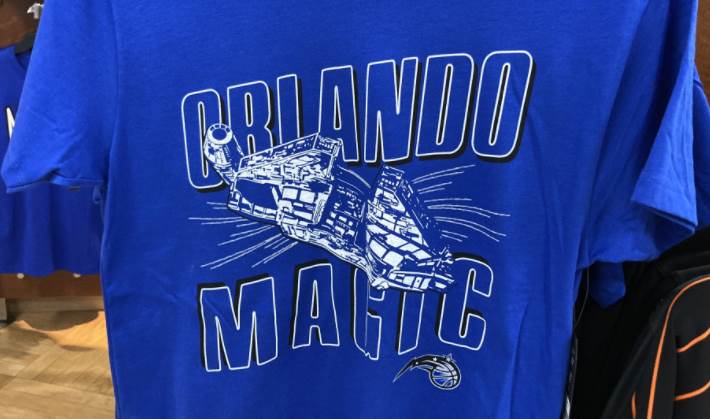 For those who were looking to get the most out of their Star Wars Night experience, the night began with a special meet and greet with none other than Ahsoka Tano herself, Ashley Eckstein. The talented voice actress and founder of Her Universe chatted and took photos with fans (myself included) who were thrilled to meet the voice behind the iconic character. There were also some other familiar faces as some of the members of the 501st, a worldwide Star Wars costuming organization, made their way around the arena.

It’s #StarWarsNight at the Amway Center in Orlando and we just saw some familiar faces! pic.twitter.com/7x4mP4Yaa9

Of course, there was also some special merchandise, including a matchup tee that commemorated the event by featuring both the Miami Heat and the hometown Orlando Magic.

There was plenty more Star Wars fun sprinkled in throughout the night, including an “NBA player or Star Wars character” trivia contest, a special video with Orlando Magic mascot Stuff, a Star Wars-themed “Whisper Challenge,” and even some musical entertainment.

Things weren’t exactly going the Magic’s way tonight, so they tried to get some help from the intimidating breathing of Darth Vader. They probably should have known that Darth isn’t exactly a big fan of… Heat.

The Magic tried to get some defensive help from Darth Vader. It didn’t work. #StarWarsNight pic.twitter.com/7t380cSoqh

Still, the Star Wars energy managed to get the fans on their feet throughout the night, especially when the jawas busted out the free T-shirts.

#StarWarsNight is winding down here at the @AmwayCenter in Orlando, but not before some Star Wars characters throw out some free T-shirts. pic.twitter.com/zPejJql8cT

It was a fun night for all involved, even if the whole thing did take place in the shadow of the Empire. Star Wars Night has become an annual event for the Orlando Magic, so if you didn’t get to experience it this year, you’ll have another chance to get in on the fun soon enough. You can find Orlando Magic tickets here.