Just in time for Boxing Day, a new season of the Canadian comedy Letterkenny is headed to Hulu. This is actually the show’s 10th season, which is a bit odd since it only started in 2016. Moreover, the series didn’t arrive in the U.S. of A until 2018. Since then, the show has found a bit of a following stateside, with many praising its off-beat humor and small town setting. So, how does the show hold up 10 seasons in? 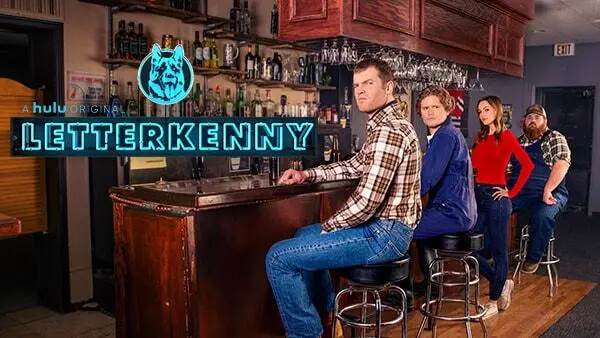 I personally haven’t checked in on Letterkenny since watching a handful of episodes from the first season. While I enjoyed and laughed often at those early episodes, it wasn’t a show I felt like I needed to return to or keep up with. Thus, coming in on Season 10, it was evident that a few things had changed. Judging by the recap that plays before the first episode of the season, the series apparently gained a plot arch (I assume other seasons had those too but the first really didn’t seem to). More importantly, it looks to have added a bevy of characters.

On the other hand, a lot about Letterkenny has remained the same. Despite all the new faces, the core group is still the main focus. And, while that overarching story still played some role in a couple of the episodes I watched from season 10, the episodes mostly standalone.

The show also remains very, very funny… at times. I like to think of Letterkenny’s dialogue style as low-brow Aaron Sorkin, featuring plenty of repeated lines and back and forth — something that’s actually comically commented on in the season’s first episode. Most of the time, I love these exchanges, but there are definitely instances when they go on a little too long and wear out their welcome. Similarly, I find that the show’s immaturity gets on my nerves sometimes and reminds me why the series hasn’t elevated to appointment viewing for me.

Overall, Season 10 of Letterkenny seems to be more of the same — for better or worse. If you liked the series before, I see no reason why you wouldn’t still have affinity for it now. In my case, I’ve found the show to be hit or miss. Indeed, while I didn’t much care for the season opener, I found the second episode to be far more enjoyable (and the third fell somewhere in the middle). As for those who haven’t checked out the show before, I might recommend watching a couple of early installments to get a feel for the show before fast forwarding to the current batch of episodes.