Wes Anderson’s 10th film, The French Dispatch, puts the filmmaker’s unique stamp on what plays like a collection of short films, a modern-day package feature. Having premiered at the Cannes Film Festival last summer, The French Dispatch arrives on Blu-Ray and Digital formats from Searchlight Pictures where it can finally be enjoyed by the masses. With an incredible cast, including Anderson’s usual players, fans of the filmmaker won’t want to miss their chance to see it from the comfort of their homes. 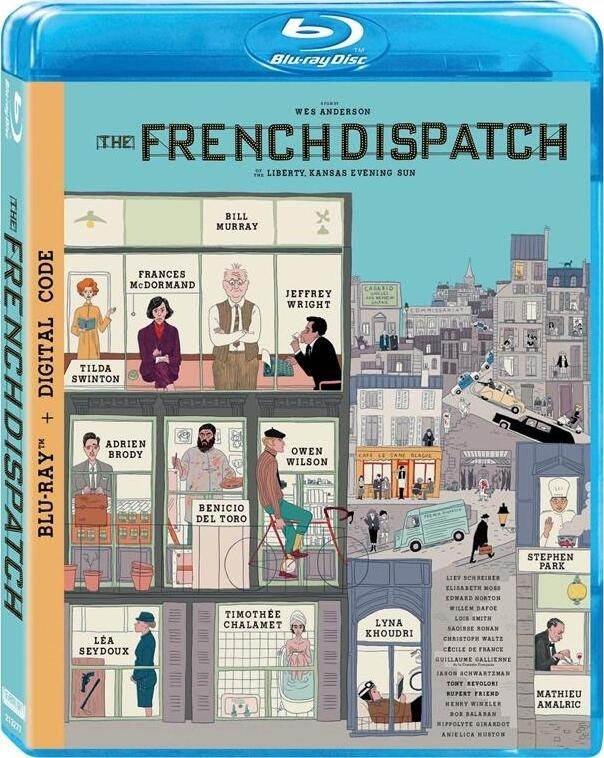 The full title is The French Dispatch of the Liberty, Kansas Evening Sun and the film is described as “A celebration of journalism.” A visual portrayal of the magazine’s final issue upon the death of its editor, four short stories transport the audience to midcentury France in the fictional town of Ennui-sur-Blasé. Bookended by a piece about the late editor are segments about a tour of the city, a criminally insane artist, a youth revolt, and the abduction of the police commissioner's son.

Primarily filmed in Academy Ratio, in addition to being a love letter to journalism, The French Dispatch celebrates the filmmaking styles of the era in which the story is set. Segments are presented in both black & white and color, and while Wes Anderson’s color choices have always evoked this time period, they are particularly bold in this film. With two stop motion animated films in his collection, Anderson also interspersed a few hand drawn animated sequences in the film, done in the style of a magazine illustrator.

The French Dispatch is a visual delight and a who’s who of elite actors. The film is narrated by Anjelica Huston and co-creator Jason Schwartzman is among an ensemble that includes Benicio Del Toro, Adrien Brody, Tilda Swinton, Frances McDormand, Timothée Chalamet, Jeffrey Wright, Bill Murray, Owen Wilson, Christoph Waltz, and Edward Norton.

Despite the delayed theatrical release, this Blu-Ray release of The French Dispatch feels rushed, or at least intentionally barren. The film transfer is fine, but there isn’t a single bonus feature accompanying the film, not even a trailer. All of Wes Anderson’s films receive deluxe Criterion Collection releases at some point, but this release leaves a more casual fan out of any supplemental features. However, fans looking for behind the scenes information should note that there is a book coming next fall about the making of the film from Abrams.

The French Dispatch casts a striking image, with bold colors when employed. The animated sequences are a real highlight of the presentation. While the aspect ratio changes throughout the film, it is most frequently a 4:3 Academy Ratio pillarboxed image.

The main audio mix on the Blu-Ray release is a 5.1 DTS HD-MA mix. Alexandre Desplat’s score primarily fills the rear channels, although the final segment of the film contains some action that includes sound effects in the rear channels and employs the subwoofer. Other audio options are a stereo descriptive audio option and a 5.1 French mix.

The French Dispatch comes in a standard Blu-Ray case with no slipcover. It’s a 1-disc release and includes an insert with a digital copy code redeemable through Movies Anywhere. The main menu features the opening shot of the film on a loop with the magazine printing on the presses in constant motion set to score from the film.

The French Dispatch is an entertaining package feature from Wes Anderson, although the broken up narrative makes for a less engaging feature than some of his greatest works. This home video release is disappointing for its lack of supplemental features, especially knowing that a Criterion Collection release is highly likely. For that reason, fans with an interest in the behind-the-scenes process may want to hold off for that inevitable release. 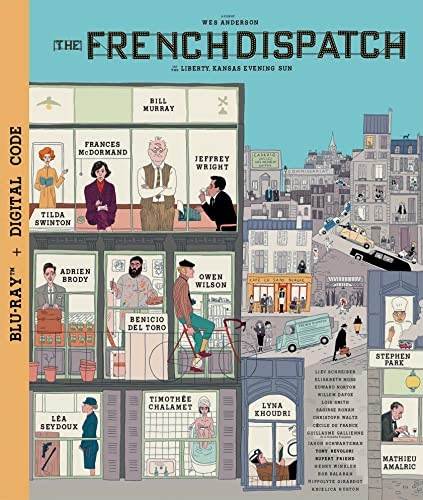