Tiger Honor is an exceptionally nuanced addition to the sci-fi world that author Yoon Ha Lee began at Rick Riordan Presents. Yoon has reintroduced readers to the magical world of fox and tiger spirits and Korean mythology through his incredibly detailed sci-fi world which allows Tiger Honor to stand alone without relying on the reader’s knowledge of the first book in the series, Dragon Pearl. 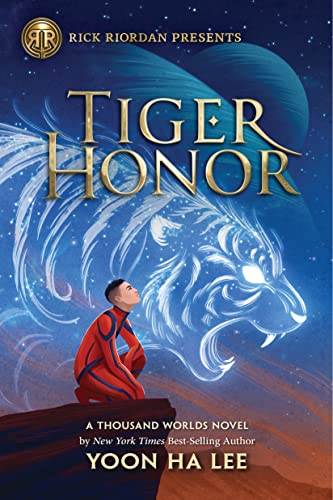 What should be a celebration at being accepted to the Space Forces is marred by a complication. The family clan is dishonored to learn that one of their own, Hwan, a former captain in the Space Forces, (the story of Hwan is found in Dragon Pearl) has been charged with treason and is on the run from the authorities.

Sebin enters the Space Forces world with trepidation. As a tiger spirit of the Juhwang Clan, they are caught between family loyalty and a desire to succeed in the Space Forces. By honoring the family, Sebin runs the risk of becoming a fugitive. Should Sebin choose to follow the oath and duty to Space Forces, the clan could expel them from family.

When the fugitive Hwan shows up on Sebin’s ship, a choice must be made. Should they follow the dangerous actions of Uncle Hwan and run the risk of becoming an intergalactic fugitive, or should Sebin trust fellow recruits like Jee, Namkyu, Euna, and a fox spirit named Min to bring down Hwan.

Yoon Ha Lee could have approached this second book in a variety of ways. I love the fact that we as readers are introduced to a whole new lead character in the form of Sebin, and the main character from Dragon Pearl, Min, has been cast in a supporting role in this book.

Crafting a compelling and noteworthy second book in a series can be difficult, but Yoon Ha Lee has done something incredible with Tiger Honor. Readers could easily pick up this book and enjoy the action-packed story having never read the first book Dragon Pearl. (For clarity sakes, I highly encourage readers to pick up Dragon Pearl. It’s fantastic).

Rarely in book series do we see a follow up book that stands alone and on its own from the preceding book. Tiger Honor is not only a rollicking space opera of a story, but readers quickly get sucked into the decision making of Sebin, and how they will choose to survive. No matter what Sebin does, someone will be disappointed, and it will be Sebin who pays the price.

The ability to connect with the audience is key in building a compelling story. Being able to build a literary universe can be difficult and keeping avid readers’ attention is a task that authors deal with in every word they write.

Yoon Ha Lee has succeeded brilliantly. Not only does Tiger Honor create a new lead character for readers to root for, but also allows this parallel story to further build out the world that Yoon has started. While Tiger Honor shares some of the same attributes as its predecessor, Tiger Honor is more than just a sci-fi book for kids.

Having read every book in the Rick Riordan Presents imprint, I am constantly wondering as I start the latest epic tale how will this author keep my interest. The goal of Rick Riordan Presents is to present different mythologies from around the world from diverse authors. In the past I have raved about every single book because I have loved every page and every word. Why do I like these books and strongly recommend them? The simple answer is that they are all fun to read.

The longer answer is that the Rick Riordan Presents imprint allows diverse authors to present culturally diverse stories from around the world. The world is filled with many stories and incredible tales waiting to be told. Having a chance to explore the world through these books, reminds me, and hopefully instills in middle grade readers that the world has some incredible stories to tell.

Diversity in stories and characters is important to better represent the world. Once again, the authors at Rick Riordan Presents continue to up their game by offering readers diverse stories and characters to root for. Middle grade readers will love Tiger Honor. Yoon has created an epic follow up and has started the year off with a space saga of incredible proportions.