Book Review — “Beyond Possible: One Man, Fourteen Peaks, and the Mountaineering Achievement of a Lifetime”

Beyond Possible: One Man, Fourteen Peaks, and the Mountaineering Achievement of a Lifetime by Nims Purja is an incredible true story about the power of possibility, fortitude, and the inner strength of mountaineer Nims Purja. 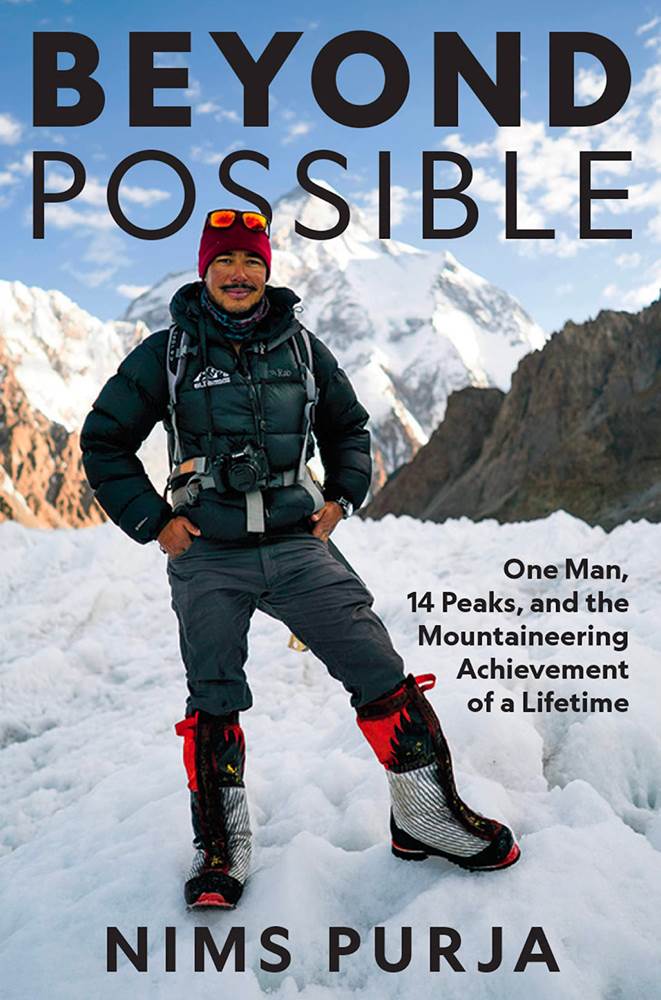 The recent Netflix film, 14 Peaks: Nothing is Impossible chronicles Purja’s journey to set a world record at climbing the fourteen highest mountains in the world. The movie is filled with thrills and incredible scenery but his latest book from National Geographic allows readers to dive into the details about Purja’s unbelievable journey.

In the book, readers are taken back to where it all began. We learn all about Purja’s childhood in Nepal, and how he grew up to become a solider in the Gurkhas, and then become the first Gurkha in the British Special Forces unit of the Special Boat Service. Purja is wonderfully descriptive about his life, and how growing up poor in Nepal was a struggle.

Thanks to his older brothers, Purja was able to attend a private school, which furthered his education and helped when him succeed when applying to the Gurkha regiment. The beyond impossible motif that shapes the journey Purja takes in the mountains is formed in his early years. Hard work was expected for success, and Purja was always willing to push himself past the limits of human endurance, to succeed.

From lengthy descriptions about his life in Nepal, to the admission process for the Gurkha regiment and then special forces, Purja brings us behind the scenes of his life, as he starts on his journey to the Himalayas. His rise from the military to the mountain top is nothing short of an epic tale along the lines of Homer.

With anecdotes about life in the military, Purja brings readers along as he plunges into battle in Afghanistan during his service in the SBS. A little luck has always favored Purja. From his time in the special forces, he describes how during an operation, he was shot and thrown off the roof of the building but survived because the bullet that was aimed to kill him lodged in the butt of his rifle and not his neck.

The stories are plenty, and for most of them it seems like Purja’s life is impossible to believe, but he provides the details in precise fashion. His success in the military was formed by discipline and a belief that he could do anything. When he resigns from the special forces to pursue his dream of climbing the highest fourteen mountains in the world, an outsider might question his sanity at throwing away his pension for hilltop glory. Readers however will cheer this epic warrior on his quest.

The fastest a climber had scaled all fourteen highest mountains in the world was just under eight years. Purja was planning on climbing all fourteen mountains in less than eight months. When he announces his plan, ridicule and skepticism are the resounding answers from friends, colleagues, and potential sponsors. People even called Purja crazy and proclaimed that he would die on the mountains.

Having climbed Mount Everest twice before launching Project Possible, Purja was no stranger to the mountains. He had a passion for climbing and realizing that he was able to push beyond the capabilities of many others, Purja saw his expedition as part pushing himself, part setting a record, and part bringing attention to the health and environment of the mountains. Purja also built his team out of Nepalese climbers to bring attention to the skilled climbers that assist every assent of the Himalayan mountains, but often get little recognition in the public eye.

Starting his epic journey with little money except from a second mortgage, and donations from friends, Purja and his team begin their trek with little support from the climbing community. Fellow climbers were either worried about the plan, ridiculed him for climbing with oxygen, or were jealous of the audacity of his goal.

Beyond Possible is an incredible tale of perseverance, strength, and the will to succeed when so many expect failure. Unlike the movie, Purja brings readers along on the journey sharing more about how he was feeling during the adventure, the doubt he felt at certain points, and the fear from near death experiences. Readers will get a better view of what Purja was feeling and admire his commitment to helping others along the way.

Climbing the peaks is one part of the story, but the commitment that Purja brings to the mountain and his fellow climbing community is remarkable. Not only does his team work perfectly together but they in many ways help motivate other climbers. From rescuing lost or abandoned climbers when descending the mountains to helping promote positivity at places like K2, Purja and his team are living their mission statement. It’s time to look at things as possible.

As the book progresses and we start to see the summiting of the mountains tick off, readers will admire, respect, and be in awe of what Purja and his team accomplished. Truly this is an incredible feat that only someone with a superhuman mindset, and a work ethic that is beyond compare, could achieve.

From, Annapurna, Everest, Lhotse, K2, and others, Purja’s mindset and sheer strength is admirable, and something that will inspire readers for generations to come. Looking back on this tale of possible, it’s easy to call the adventurer crazy for his dreams. All great figures are usually regarded as crazy before they achieve the impossible. One can only imagine the names being used to describe Orville and Wilbur Wright before they had their first successful flight.

Start 2022 with a book that will inspire, motivate, and move the bar of excellence a lot higher. Take some time to dive into the mindset of Nims Purja and see how he was able to turn the impossible to the possible.

Beyond Possible: One Man, Fourteen Peaks, and the Mountaineering Achievement of a Lifetime is a 4-star rollercoaster of a ride that will make anyone want to go outside and explore, and perhaps climb a mountain.