“In the first season, [Harry] learns to love and learns what friendship is and connects him to Asta, which is what ends up saving the human race,” Resident Alien series creator and executive producer Chris Sheridan explained. Crash-landed alien Harry is back for more terrestrial adventures with the premiere of the second season on January 26th at 9/8c on SYFY. “His journey in Season 2 is, sort of, extending that humanity to people outside of Asta. Learning empathy and trying to realize that maybe there's other people in this world.” 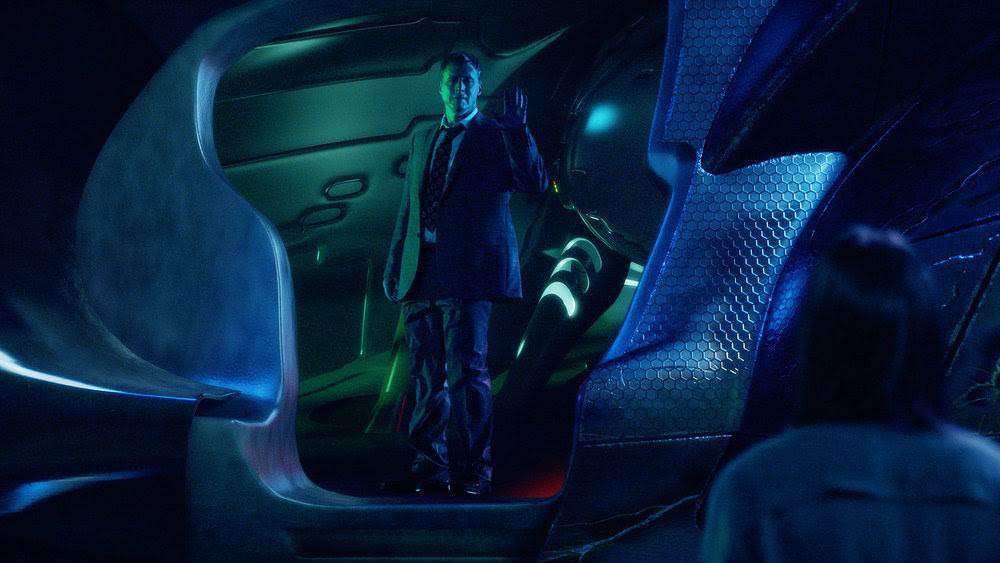 The cast took a break from their busy production schedule in mid-December to share some teases from the new season along with some behind-the-scenes stories. “It kind of occurs to Asta, after she has a talk with her dad, that she's maybe the only one that Harry cares for, and that's a lot of responsibility when she's got the whole world on her shoulders,” Sara Tomko explained about her character’s journey. “She starts, kind of, pushing him out of the nest… We started having what felt like a mother-son relationship a little bit. She was like, ‘You've got to get out there and meet people.’ And she has to have conversations with him, talking to him about his feelings, about pain, about fear, about family. All the while, she's still trying to connect with her daughter, and she's also still learning about how to ask for help… I think, once again, you are going to see Harry and Asta in this very similar trajectory in season 2 where they are both still learning how to reach out and ask for help, which is pretty special.”

There’s a lot of heart in Resident Alien, but also a lot of comedy, some of which is improvised. “Chris is a very generous creator in a lot of ways,” Alan Tudyk revealed, who plays the titular alien, Harry Vanderspeigle. “We usually have, I know for myself, an opportunity to, kind of, play, especially if it's a joke. If it's just a joke, the punch line, you can do the punch line as many different ways as you want.” Another funny moment in the show that is off-the-cuff is Harry’s alien language. “It's a back-and-forth between me and the editors. It switches up a little bit every take, and then they find the best string of sounds and probably facial expressions to go along with it that makes for the best scene.”

Occasionally, someone has to wrangle in the fun on set to get the job done. “It takes me back to the bowling alley scenes, which is, I believe, my first day of filming,” shared Corey Reynolds, who plays Sheriff Mike Thompson. “I think we went three or four takes in before [Diector Robert Duncan McNeill] was, like, ‘Okay guys, do you know what? I think it's important that we at least get one that's as written, you know, maybe just one. Can we just get one? Once we have one that's on the page, we are good to go, but we should probably, for safety, let's get at least one that is what's written,’ because I think we just decided that ‘Oh, yeah, the script is just a suggestion.’ We just decided to go on our own little tangents there.”

For fans of the comics that inspired the series, the show likely already feels improvised. “It took off in its own direction early on in season 1, not that we don't still pay homage to the novels,” Chris Sheridan said about how closely they follow the source material. “We even look for different framing of some shots and some different shots from the graphic novels that we try to use in the show. That first graphic novel was about the murder of Sam Hodges, which is continuing into the second season, so that is still alive for us. There is an episode where that is, sort of, pulled from one of the graphic novels that we are doing this season where Harry and Asta go to New York in search of an alien, and that is directly and indirectly off of one of the graphic novels. That was one of my favorite comics of theirs that they did. I thought Peter Hogan and Steve Parkhouse did an incredible job with that one. As soon as I read it, I thought that would be a great training for her, Alan, and Sara to do. So, we worked that into the season.”

There’s more to explore on Earth for Harry in season 2 of Resident Alien, airing Wednesdays at 9/8c on SYFY.