ESPN+ has found a format that works for series that dive into the history of out favorite sports. We’ve seen it with Peyton’s Places covering the NFL, we’ve seen it with Abby’s Places covering soccer and even Eli’s Places which took a look at the world of College Football. Now, legendary UFC champion Ronda Rousey is taking us through the history of combat sports with Rowdy’s Places.

In the 6th episode, titled “A Dynasty in the Desert,” features Ronda reuniting with UFC President and her good friend Dana White. The two reminisce not only about Ronda’s storied career but also how the UFC became the massively successful organization it is today. The episode opens with White teaching Rousey how to play Black Jack, which prompts her to admit that she hates gambling. The two friends make a wager as the pregnant Rousey tries to negotiate her same contract with the UFC for her future daughter. She uses some TV magic to make sure she wins the hand.

They then get into some of the history of the UFC as we see some old footage of a young White talking about what the UFC has to offer. We then come back to present day as Ronda is given a tour of the new UFC Apex in Las Vegas. It’s a great look inside the impressive new venue. We get a look at the monument to The Ultimate Fighter, the expanded performance institute and even the original UFC octagon canvas which is hung up on a wall.

Throughout the episode, White mentions again and again how big a role Rousey has played in the success of the UFC and helped them to expand in the way they have. We also see a great deal of highlights from her career that further explain just how wildly successful she was.

The episode briefly spends some time exploring the fight White had to go through to get mixed martial arts legalized across the country. We see footage from the New York State assembly and hear arguments against the sport that now sound completely ridiculous. White shares the story of how he and the Fertitta’s purchased the UFC as it was failing after being billed as an ultra violent “freakshow.” White then explains how the first season of The Ultimate Fighter is what launched the UFC to a new level. 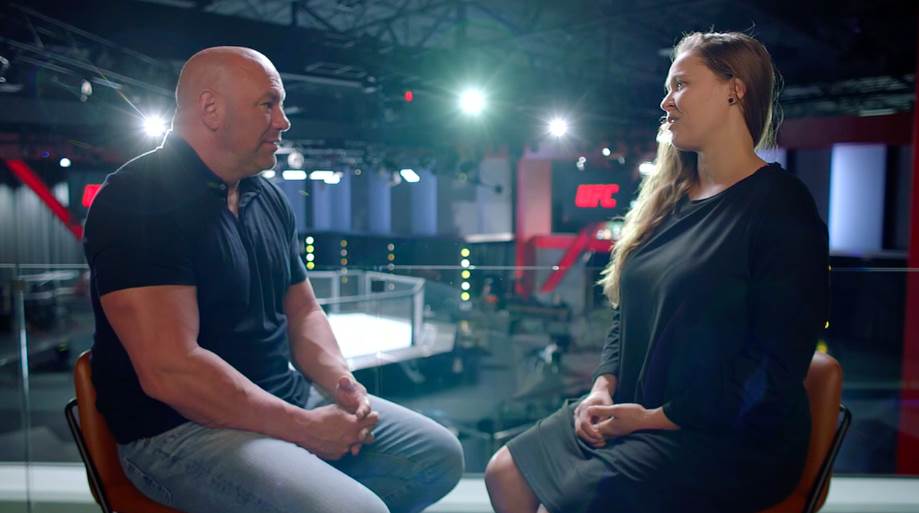 Ronda points out though that, even though the sport was becoming wildly popular, they were still only operating at 50% because they did not yet have women in the sport. We even see old footage of White being asked about when women would join the UFC, to which he responded “never.”

White then tells a story about how he spoke with Ronda for 45 minutes and she convinced him not only to introduce women into the UFC, but to make her the face of the movement. That obviously proved to be a great decision as Ronda went on to become one of the biggest stars the sport has ever seen.

Ronda then talks about her ability to promote a fight and surprisingly explains that winning doesn’t mean anything if you can’t sell the pay per view. It’s surprising to hear that from a competitor like Rousey, who was always so supremely focused on achieving her goals. Comments like that open up the eyes of fans who only see a portion of what this world is really like for a fighter.

As the episode comes to a close, White assures fans that there is no part of him that can imagine stepping away from the UFC right now. Ronda points out that she can’t imagine White without the UFC.

This is a fun episode of Rowdy’s Places as it takes us through the history of the organization that made her such a star. We get a peek inside the UFC Apex, which fans simply don’t get a chance to see otherwise; we get to hear Dana White talk about the process of transforming the UFC; and we get to hear from Rousey about what it takes to become a star in this sport.

You can watch Rowdy’s Places on ESPN+ now. Fans can subscribe to ESPN+ for just $6.99 a month and can cancel at any time.