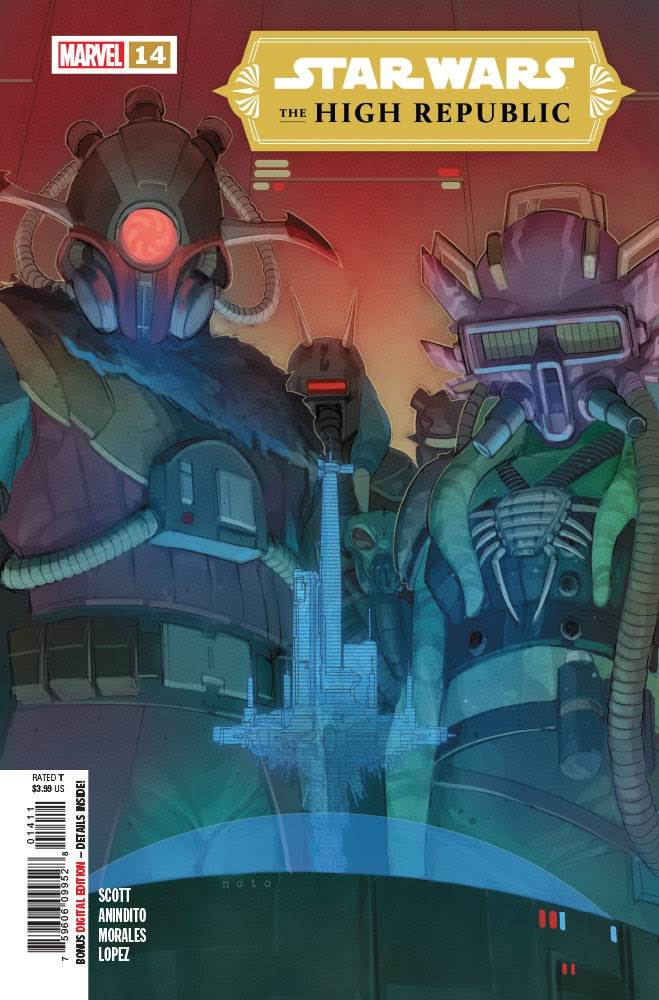 I believe this week’s new issue of Star Wars: The High Republic from Marvel Comics represents the penultimate installment for the initiative’s first phase, so it makes sense that the action is starting to amp up as the storyline intersects with the cataclysmic events of Claudia Gray’s novel Star Wars: The High Republic – The Fallen Star from January.

The High Repubic #14 begins where the previous issue left off, with a number of Jedi having taken the starcruiser Ataraxia to the Nihil’s Great Hall in the remote area of the galaxy known as No-Space, where the ruthless band of marauders have adopted the strategy of attacking their own base to kill the invaders (along with their own people who are still inside). 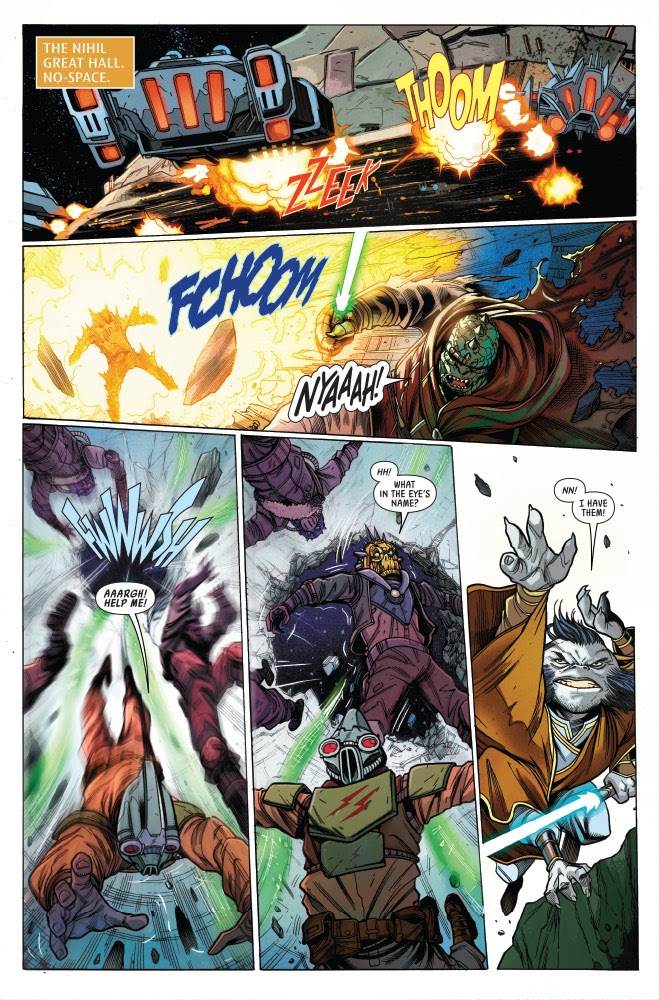 The cliffhanger from last month of Marshal Avar Kriss’s potential drift toward the dark side of the Force is swiftly dissipated and revealed to have been a red herring, as newly minted Jedi Knight Keeve Trennis steps in to stop her from killing Nihil Tempest Runner Lourna Dee with her lightsaber at the last second. Then the Nihil survivors of the battle are both surprised and disgusted by the Jedi’s show of mercy, as they take them all prisoner aboard the Ataraxia instead of simply executing them as they would have done. Master Sskeer tells Keeve that this will likely turn out to be his last mission due to the steady progression of his uniquely Trandoshan disease, and the group returns to the Eiram system, where the Starlight Beacon space station has been in orbit to help locals recover from a natural disaster. Here’s where it gets a whole lot more interesting, because we get to see the other side of the conversation Kriss had with her old friend Stellan Gios in The Fallen Star, which you may remember was interrupted by a huge explosion from Starlight Beacon’s engineering section. 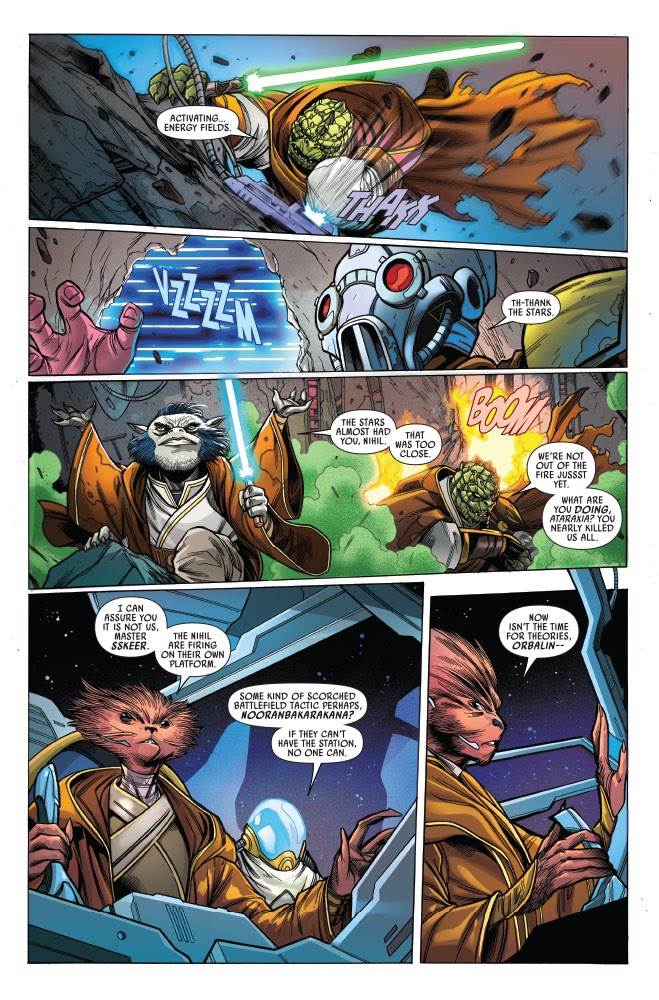 The Jedi manage to find a way aboard the station and evacuate many of the passengers in its top half, but not before the power gets knocked out on the Ataraxia, seemingly setting its prisoners free. And just when Kriss, Trennis, and Sskeer are about to spring into further action, they begin to feel the devastating, Force-draining effects of the mysterious creature brought to Starlight by Nihil saboteurs in Gray’s novel. It’s a great, tantalizing ending that has me wondering how writer Cavan Scott is going to wrap this narrative up with just one issue remaining before The High Republic rewinds time 150 years for its second phase, but I trust the climax of this run will be just as excellent as everything that’s come before. In the meantime, I’m glad to see the creative team following through on the promise of telling the story of Starlight Beacon’s destruction from multiple perspectives, and illustrator Ario Anindito’s detailed art goes a long way in helping me get a better grasp on the space station’s geography than I had based on prose alone. The big question here is what becomes of Lourna Dee, and I have a feeling we’ll get at the very least a partial answer to that question when issue #15 hits comic shops in March. 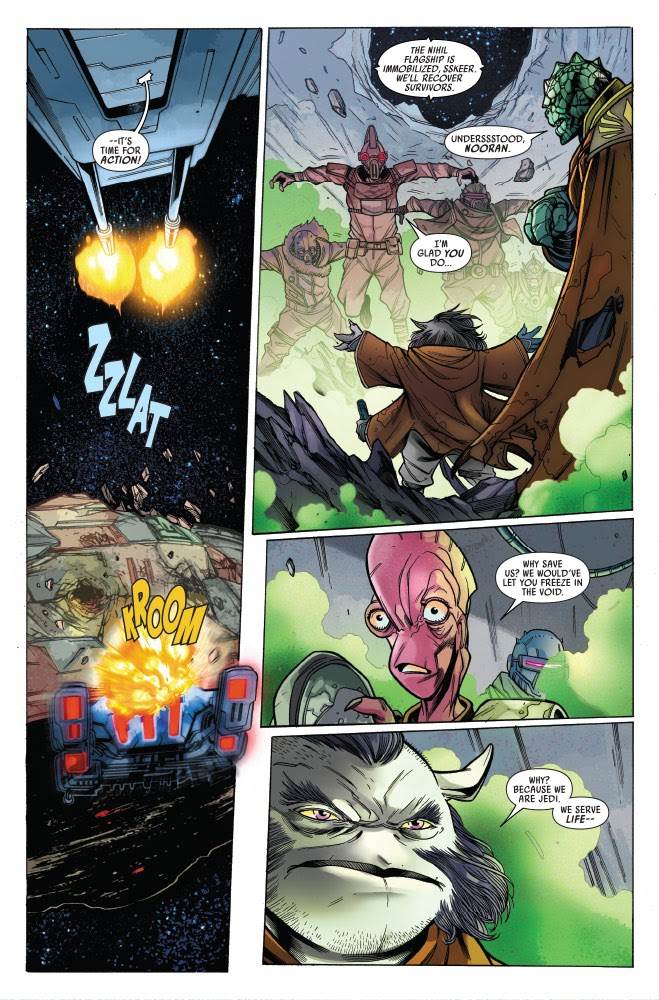 Star Wars: The High Republic #14 is available now wherever comic books are sold.