The magic of Disney’s Encanto can now be a part of your casita with the home video release of the 60th animated feature from Walt Disney Animation Studios. This review covers the 4K/Blu-Ray/Digital Copy Ultimate Collector’s Edition release, but families can also bring home the magic on Blu-Ray and DVD. The worldwide phenomenon can now have a home on your shelf alongside other timeless Disney classics. 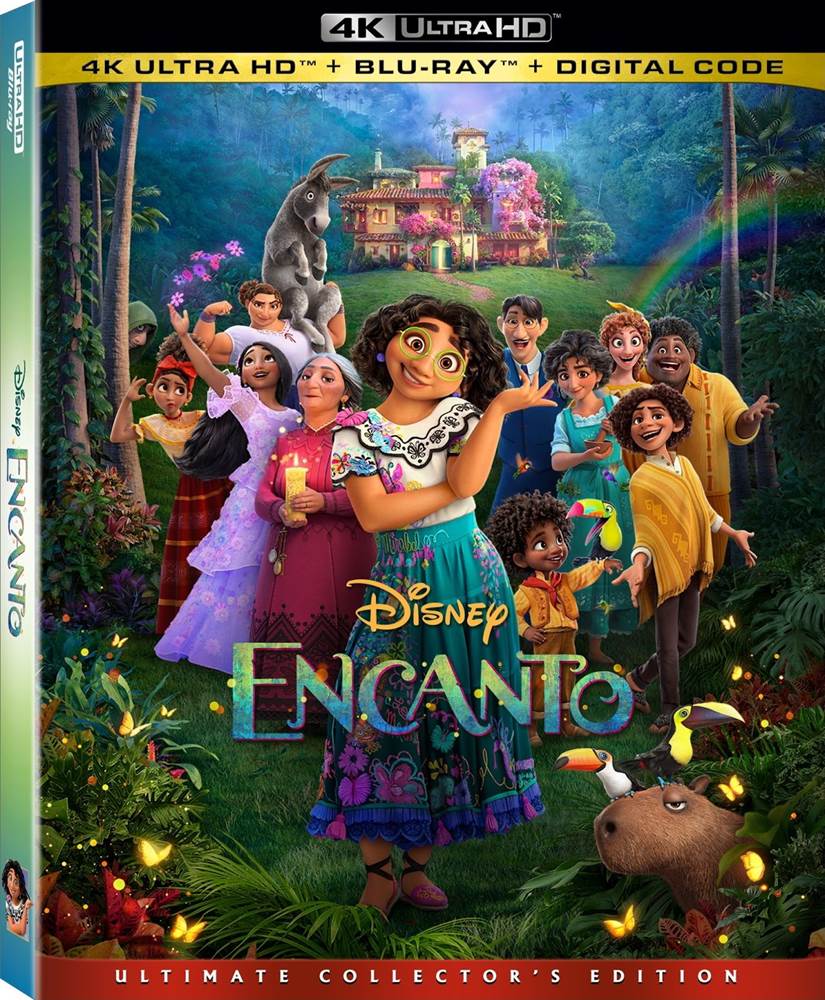 The family Madrigal was blessed with a Miracle long ago and live in an enchanted place called an “Encanto.” The magical home bestows each family member with a magical gift… everyone except Mirabel. But when the magic appears to be coming to an end, Mirabel finds herself in the unique position to be able to pick up the pieces and keep her family united.

A musical spectacular with songs by Lin-Manuel Miranda, Encanto became a hit through its Disney+ launch last Christmas. It’s so popular that the soundtrack and “We Don’t Talk About Bruno” have skyrocketed to the top of the charts. A perk of owning the film on disc is the guarantee of consistent picture quality and upgraded audio options for living rooms equipped with surround sound.

More recently, Disney’s home video releases have felt a little bit barebones, but not this one. Encanto has over an hour of supplemental features that go behind-the-scenes of the filmmaking process, including a deep-dive into the influence of Colombian culture. While not quite the volume of content from the early 2000s when every film was treated to a 2-disc special edition release, it’s more robust than Disney has given fans in a while, which is it’s own kind of miracle.

With bold colors and rich details, Encanto looks dazzling on 4K Ultra-HD. Walt Disney Animation Studios puts so much detail into their films and subtleties like stitching in the fabric on costumes really come to life in this transfer.

Encanto arrives on 4K Ultra-HD in a standard black case with disc holders on both sides of the interior. The 4K disc features artwork while the Blu-Ray disc is Disney’s standard blue with white text. An embossed slipcover with metallic accents is included in the initial pressing. Inserts include a digitally copy code redeemable through Movies Anywhere (plus Disney Movie Insiders rewards points) and a flier for Disney Movie Club.

The Blu-Ray disc opens with a trailer for Turning Red and the Disney Bundle (Disney+, Hulu, ESPN+). The main menu on Blu-Ray starts with a flyover to Casita before zooming up to a static house with characters in each window and animated motion. The 4K disc automatically plays the film without loading a menu. When pressing the main menu button, it takes you to the menu without the flyover intro.

Disney’s Encanto continues the longstanding tradition of magical animated classics from the studio that Walt Disney founded. It’s a beautiful film and while it’s true that it’s available to stream, this release gives an in-depth look at the journey to bring the film to life in addition to superior video and sound quality. Families have been collecting Disney animated films on home video since the 1980s and the honest truth is your collection wouldn’t be complete without it.