Internet cafes (Remember those?) are busy with customers making purchases of the illicit Pam & Tommy sex tape. Rand Gauthier’s (Seth Rogen) prediction that the internet would be the best place to sell the tape, is paying off handsomely for the disgruntled carpenter. 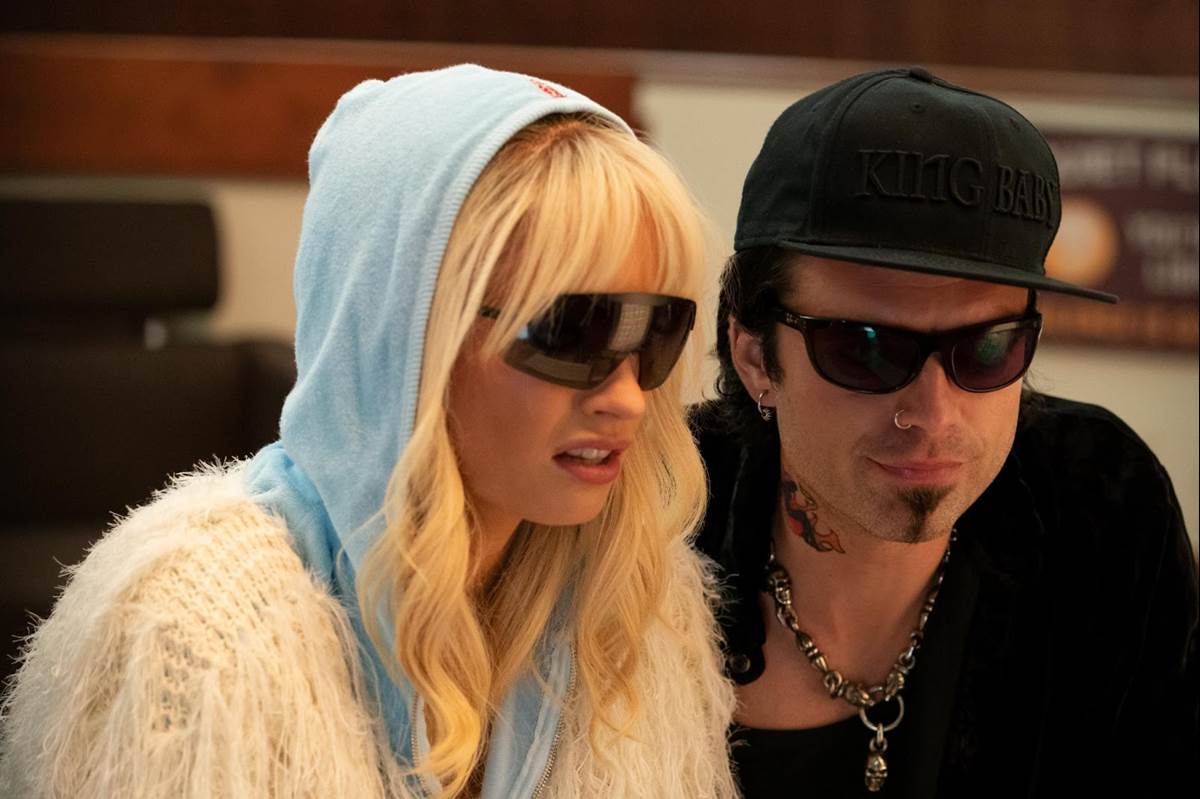 While thousands of tapes are being purchased by the minute, Pam (Lily James) and Tommy (Sebastian Stan) are oblivious to the brewing storm on the world wide web. They are at their doctor’s office for an ultrasound of their baby.

At home, Tommy and Pam are excited about the baby to come. For Tommy the ultrasound picture is the most precious object ever and must be preserved. Tommy runs out to the garage to place the picture in his safe. When he discovers the safe is missing, the couple panic. When the cops arrive, Tommy details all the items of value in the safe, but it’s Pam who mentions the tape.

Pam is concerned that someone would play the tape, while Tommy downplays that possibility with the response “who can play a beta tape”? Thinking the cops won’t do anything, Tommy calls a private investigator named Anthony Pellicano (Don Harvey). After going through a list of possible enemies with Tommy (which includes John Stamos apparently), they settle on Rand as being the culprit. During this discussion Pam learns that Tommy refused to pay Rand, and then held a gun to his head when he tried to retrieve his tools. Tommy and Pam relax thinking that Pellicano will find the tape before it got leaked.

Showing up at Rand’s apartment, Pellicano attacks him (I don’t condone violence, but I really enjoyed this punch by Pellicano). Demanding the tape, or else, Rand is panicked. To make matters worse for Rand, he discovers that his profit machine is losing money because there are now bootlegs of his tape being sold in the parking lot of Tower Records.

Updating the couple about his encounter with Rand, Pellicano is confident he will get the tape back, and that Pam and Tommy have nothing to worry about. Feeling relaxed, Pam is at work on the set of Baywatch, and to her horror finds crew members watching the tape. Racing to Tommy’s band rehearsal, Pam informs her husband that the tape is for sale on the internet.

Not knowing what the internet is, the two head to a Malibu library, and to their shock, they find the site that is selling the tape. Pellicano is called and he informs the two that Rand has partnered up with Miltie to distribute the tape.

Enraged, Tommy hires a gang of thugs to chase after Rand. Hoping for help from Miltie, Rand is asked to go to the studio and clean everything out. Back at Pam and Tommy’s the two are discussing the ramifications of the tape going public. Pam sees this as far worse for her. Everyone will celebrate Tommy, but to Pam, they will shame her.

At Miltie’s studio, Rand is grabbing every tape he sees. When Anthony Pellicano shows up, Rand leaves through the back scared out of his mind. The stress of the situation may be getting to Rand, but no one is feeling the stress like Pam. Concerned by some pain in her abdomen, and worried about her baby, Pam and Tommy go to the hospital, only to learn that she had a miscarriage.

Thinking he is safe at his apartment, Rand is frightened by the arrival of some fearsome looking gentlemen. Escaping out the back door, Rand is fortunate to avoid a beating by Tommy’s hired goons. Taking refuge at Erica’s apartment, the future looks dangerous for Rand Gauthier.

Leaving the hospital, Tommy and Pam are emotionally spent by the loss of their baby. Pushing through a throng of paparazzi, the two make it away, only to be accosted at a stop light by another photographer. Tommy is ready for violence, but it is Pam who ends the episode in a fit of rage and hurt as she smashes the windshield of the photographer. 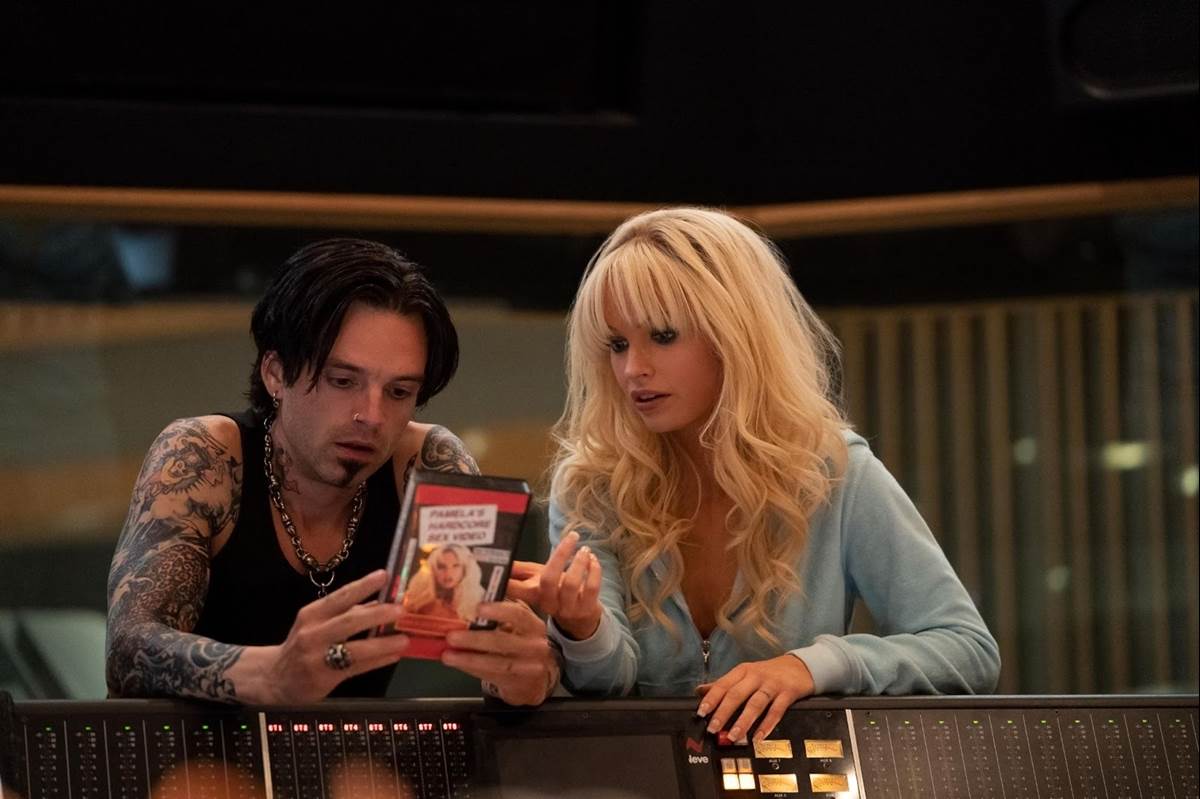 Pam and Tommy now know about Rand’s crime and his plan to sell the tape. The audience has waited for three episodes and now Pandora’s Box is open, and all the characters know it. Believing this can be stopped, it’s incredible how much the internet has altered our lives. Without the net, Rand and Miltie had no way to sell the tape. Before the internet, Anthony Pellicano would have been successful and retrieved the tape with no harm to the couple, and much harm to Rand Gauthier.

Lily James is award worthy in her performance as Pam. She brilliantly summarizes to Tommy why this tape is such a disaster for her. For her whole career, Pam has been objectified for her looks, and now this private moment with her husband is going to be tabloid fodder and another reason to shame Pam and justify the public image of her as a sex object instead of a person. Pam is terrified of how this tape could damage her life. Tommy just doesn’t understand the implications of the tape, because he is not a woman in showbusiness.

Seth Rogen and Nick Offerman are perfect as the sleazy disgusting lowlifes Rand and Miltie. I hate their characters, but their performances are incredible.

Don Harvey makes an immediate impact as Anthony Pellicano. Pellicano in real life used illegal and questionable tactics for his clients, but I truly enjoyed Harvey’s entry to the story. If I had a problem and was rich, I would certainly turn to Pellicano. Harvey’s performance made me feel like everything was going to be alright. It won’t be, but that’s how good Don Harvey is as the infamous private investigator.