“It is a story that I initially thought of, or tossed around in my head, as a movie or a limited series,” Severance creator, writer, and executive producer Dan Erickson revealed at a TCA press conference to promote the new Apple TV+ series. Directed by Ben Stiller and starring Adam Scott and Britt Lower, the series takes a twisted look at what would happen if you really could separate your work and your life into two separate states of existence that can’t comingle. “It became clear to me that this is a world we wanted to take our time and explore,” Dan continued about the decision to turn his idea into a full series. “How would this technology affect other things? Dating, relationships, education, religion, the military, all sorts of things. There's just so much of a world to build here, and I think that we're just now starting to see the cracks in the Lumon world and see what might be beyond in the greater world.” 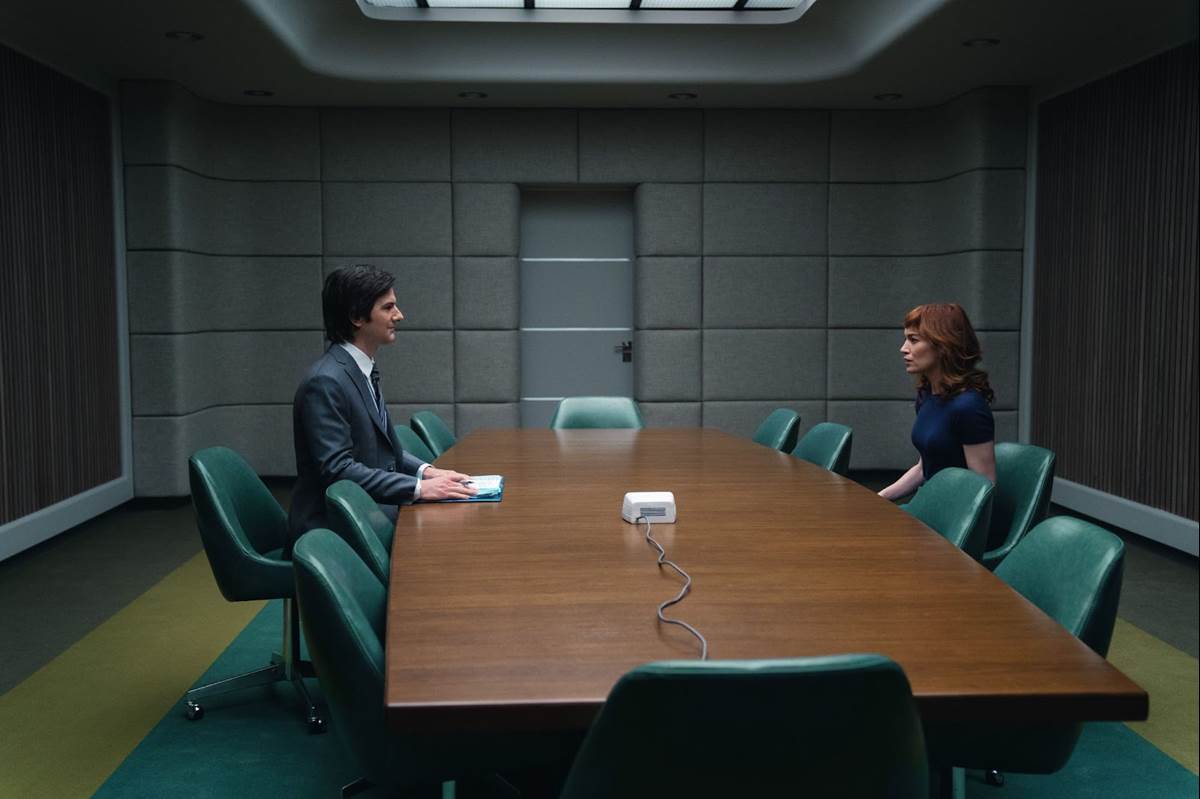 The “Lumon world” Dan refers to is the name of the company within the series, Lumon Industries, who invents the severance procedure that splits a person’s memories between work and the rest of their life. Crossing a barrier and entering the workspace flips a switch inside their heads, causing the change. “It was important to Ben [Stiller] and Dan and I that we not approach it like it's two different characters,” Adam Scott said of his portrayal of the two different modes of Mark Scout. “It was very important that this be one guy and it's just different parts of one guy or almost different halves. And so the differences are subtle. I mean, one of them has 40-odd years worth of life experience and the sorrow and grief and joy and all of the stuff that goes along with that. And the other one is, for all intents and purposes, two or two and a half years old but physiologically is bringing in a lot of that stuff and a lot of the feelings from the outside world just doesn’t know how to locate it or name it. And so it was a matter of figuring out what those differences are from one to the other, the addition/subtraction of that and how it may manifest physically or in the voice, and how that changes over the course of the story.”

“Severance is about this very human desire to want to compartmentalize parts of our lives, whether that's work, or grief, or a part of yourself that you're at odds with,” actress Britt Lower shared. “What really struck me about the role of Helly is that she really becomes her own worst enemy in this series, she's at odds with herself. And I think the core question is does forgetting about the painful parts of life or the parts of yourself that you don't like for half the day, does that make life better or worse? And there's a lot to chew on in there.”

“I thought Dan wrote something that was such a great metaphor for more than even just the work/life balance, just our lives,” Ben Stiller contributed, who serves as director and executive producer. “What we're doing in our lives and how we're going through this experience that we all have of being alive and how we spend our time and what we question and don't question. I feel like that's so there in that workspace, that idea that really resonates and made me think about it a lot. As we were sort of toiling to make the show about people toiling and doing things, we were all wondering what are we all doing here, doing all this stuff, keeping ourselves busy? I mean, it's not just that, but I think ultimately, those bigger questions are interesting and somehow resonate for me with this show.”

The introductory season of Severance consists of nine episodes, filmed as a group like a long film rather than episodically. “There is an ending to the season that would hopefully make you want to see another season,” Ben Stiller added about the future prospect of the series. “I know Dan has formulated another season, and I'm hoping that season, if Apple should go forward and make a second season which we hope, but that second season will answer unanswered questions from the first season.” If all goes well, Dan Erickson currently has a vision for at least two more seasons.

The first two episodes of Severance are now streaming on Apple TV+ with subsequent episodes releasing on Fridays.