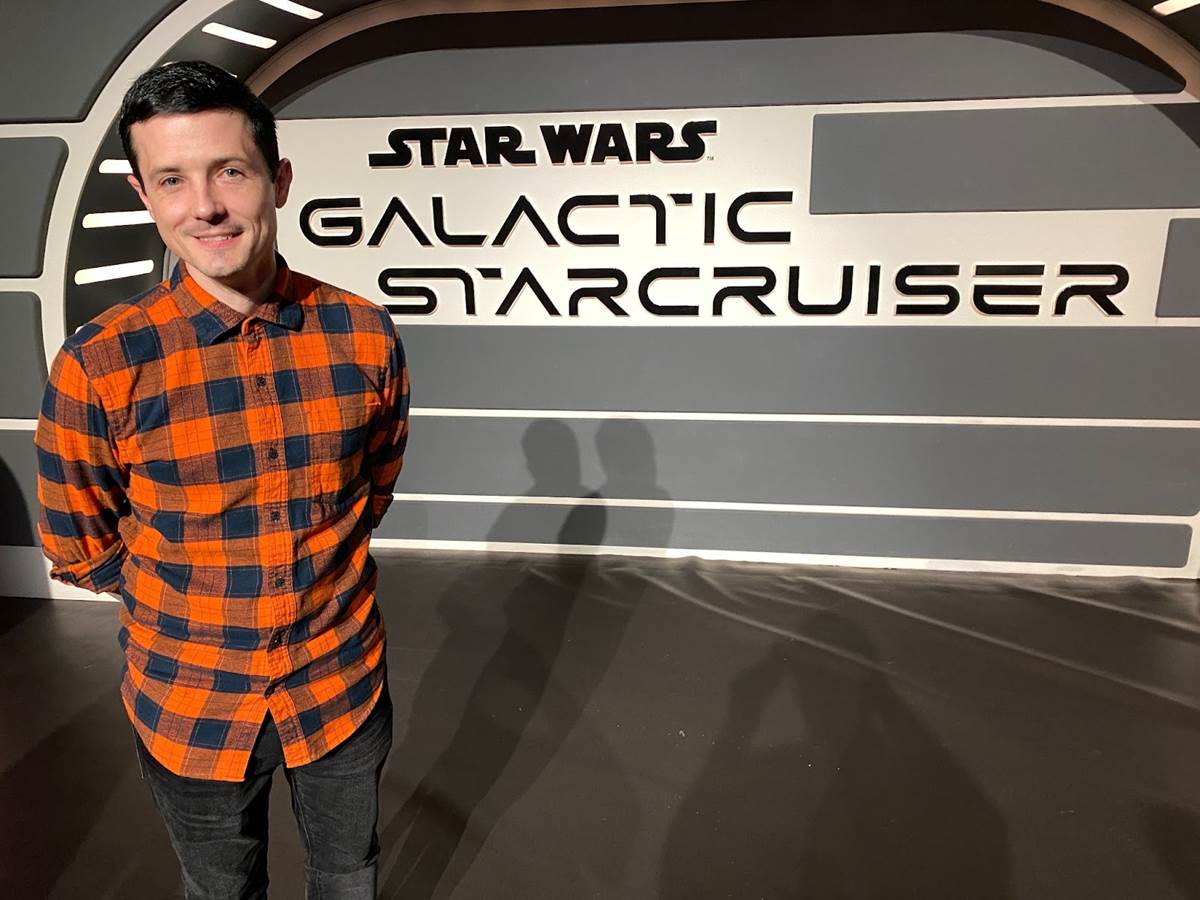 Matt Martin has been employed by Lucasfilm for 15 years, where he’s worked his way up from a product developer to member of the esteemed Lucasfilm Story Group– an almost infinitely knowledgeable collective with its creative influence helping to shape pretty much every aspect of contemporary Star Wars storytelling.

I had the wonderful opportunity to speak with Mr. Martin last week at the Star Wars: Galactic Starcruiser media preview event in Walt Disney World, where he told me about his origins with the project, how Lucasfilm is using ancillary materials to fill in the starcruiser Halcyon’s backstory, and why on-board entertainer Gaya is deservedly a galactic pop-singer phenomenon. Mike Celestino, Laughing Place:  How did you first get involved with this project?

Matt Martin:  I generally am the main Walt Disney Imagineering representative on the Lucasfilm side, so I was already working on Star Wars: Galaxy’s Edge alongside the Imagineers. And as soon as [Galactic Starcruiser] started to become a thing, I was brought into it fairly early on [along with] other folks on my team. I guess it’s been going for like five years now. [laughs]

LP:  How did you guys settle on which specific Star Wars characters and other touchstones were going to be involved, both new and familiar?

Martin:  Since it was developed alongside Galaxy’s Edge, that gave us a clear guidepost, at least. We knew we wanted to bring people down to Batuu, so then it was kind of like, ‘What’s a good mechanism for that? What’s a good way to put people into a really glamorous experience– show them that high-end side of Star Wars?’ So we landed fairly early on, on the starship cruiser model. From there, the new characters sprang out of the obvious archetypes that you would expect from a cruise ship– of course there’s a captain, there’s a cruise director, there’s a mechanic, there’s the entertainment.

It really flowed pretty naturally, and then based on the storytelling that we were doing on Batuu– and a lot of the attractions and characters that are already there– it was sort of clear which ones we could bring into our story here. ‘Which ones made sense to have a natural connection?’ We know Rey had an opportunity to come up here after what goes down on Batuu. Chewie’s pretty fun, because he shows up on the first day of the Halcyon, then guests will help him escape, and then after what happens on Batuu, he has to come back up to help [the cruise passengers]. 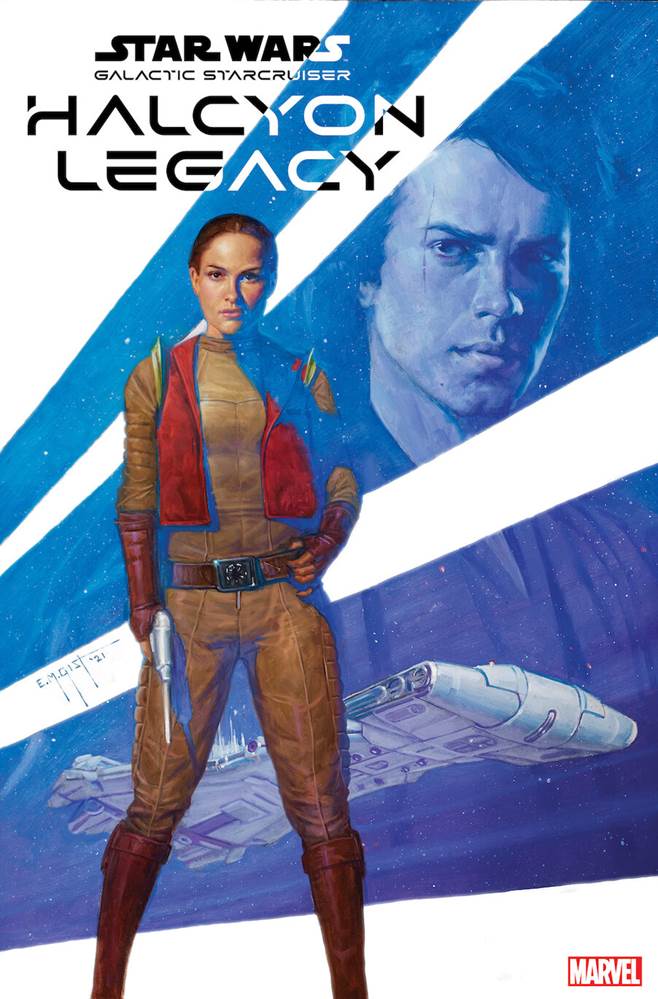 LP:  The first issue of Marvel’s Star Wars: Halcyon Legacy comic-book miniseries is already available, with four more coming in the months ahead. Tell me about building out the history of the Halcyon in Lucasfilm’s publishing content.

Martin:  What’s actually really cool about this project is we built out most of the history for [Galactic Starcruiser], so it wasn’t built out necessarily for the comic books. It was, ‘Okay, we’re going to have guests on this ship for two days / two nights. They’re going to be interacting with the same people [and] they’re going to have questions about this ship, so we need to have the answers. So it was really natural that we built out a history, and because it’s Star Wars, we have the advantage of actually being able to tell some of those stories.

[The Halcyon] has a 275-year history. The voyage that you will go on as a passenger is the 275th anniversary, celebrating its very first voyage, but that harkens back to the High Republic era when it was first created. After that, the Hutts took over for a bit– it became kind of a casino ship. When the Empire also took over, the Halcyon became a retreat for those officers and bureaucrats that [were] on the Emperor’s good side. And then, of course, after the Empire fell, the Chandrila Star Line got to take it back and it became the glamorous starcruiser that we see today. 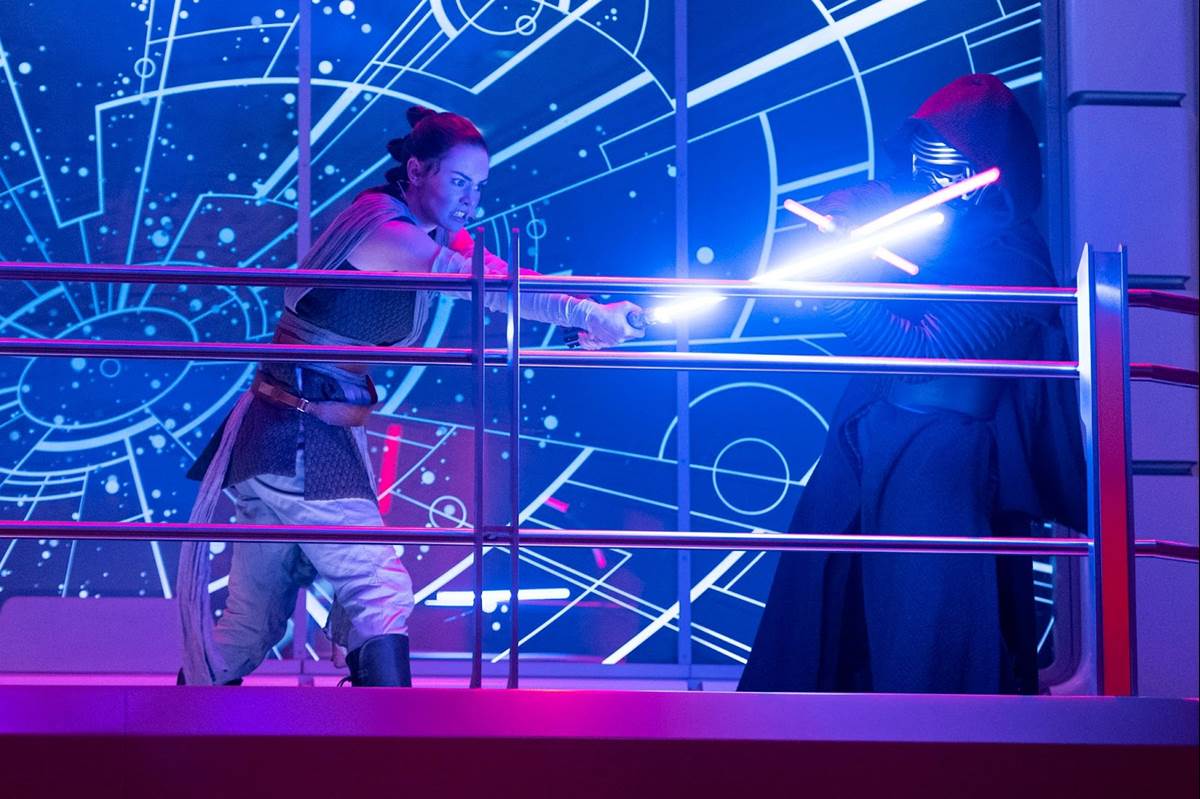 LP:  A question I’ve heard a lot about both Galaxy’s Edge and the Galactic Starcruiser is why they were chosen to be set in the sequel trilogy era. Can you address the concerns of someone who’s maybe more of an original trilogy or prequel trilogy fan?

Martin:  [These experiences] definitely draw elements from all of the eras– I’d say prequel fans in particular will be stoked, because the visual design really feels set in that prequel era. And what’s cool is that– since Batuu is part of your journey– you do get both sides of Star Wars: you get the glitzy, glamorous, upper-level Coruscant-y side of things as well as the more lived-in Galaxy’s Edge with the scoundrels and all of that. But there are touchpoints and Easter Eggs] across the ship from all of the different eras that I think fans of any era would probably just love to explore.

And I would say that what makes it even cooler is that in addition to pleasing the fans of all the eras, it’s also a really interesting thing for somebody who’s not a big Star Wars fan, because there’s enough new characters that fill archetypes that you’re familiar with. Even if you’re not super into Star Wars, you can still meet these people, interact with them, and understand their character and their personal journey, and go on your own adventure. So it’s kind of got a little bit of everything. LP:  Walking away from the preview experience, my absolute favorite new character was Gaya, and I was not expecting that at all. What went into creating and developing that character, and what can fans expect from her when they board the Halcyon?

Martin:  Yeah, Gaya’s amazing. She’s a galactic superstar, and with good reason. I think under normal circumstances, [Chandrila Star Line] probably would not have been able to get her to do such a small show. She plays arenas, you know? [laughs] But she has a personal reason for being there, as well, which if you follow her, you’ll start to learn what that reason is. Her development actually goes back into Galaxy’s Edge days. It was an early idea where we wanted to have a Twi’lek singer that could be entertainment, and it’s been something that we’ve been passionate about ever since.

It’s such a cool thing to experience, because she’s really there, she’s really singing. She’s singing these songs that are galactic pop songs– they feel iconically Star Wars, but they’re also super catchy and she’s such a great singer that it works so well. [In addition to] the dinner version [with] the full band [and] Ouannii doing her thing, [Gaya] also does an acoustic set on night two, which is incredible. She’ll be out there with just Sandro playing the same songs, but the acoustic versions of them. Getting to see both versions is really cool. I love her. 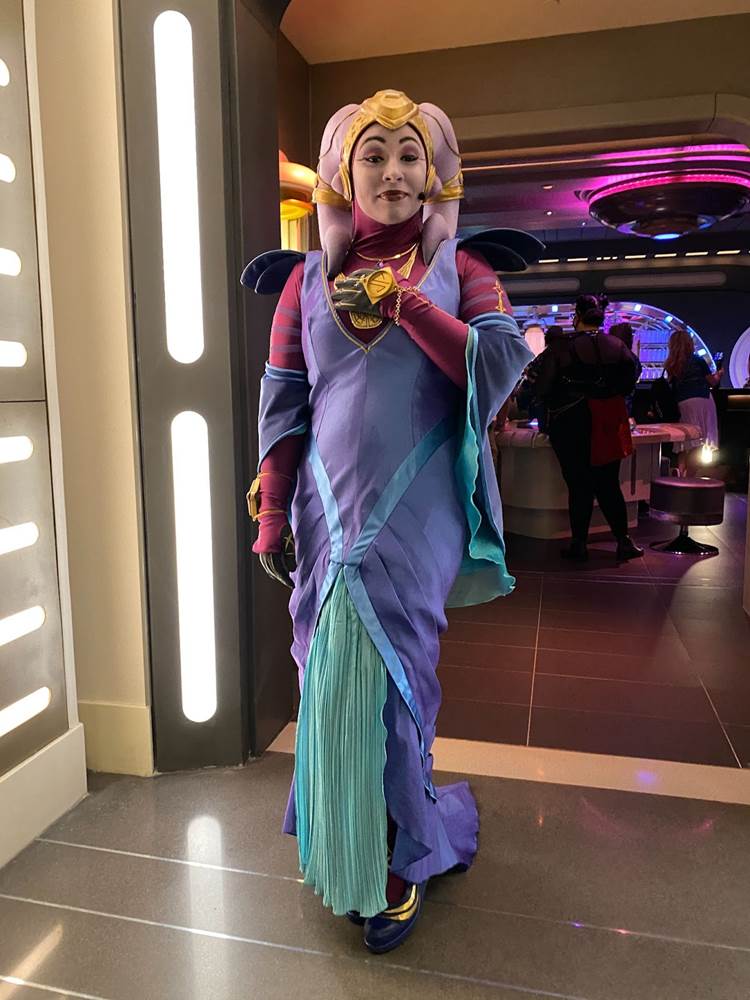 Star Wars: Galactic Starcruiser is now open at Walt Disney World. For additional information be sure to visit the resort’s official website.