Raven Baxter has moved to San Francisco with her son Booker to take care of her father Victor in season 5 of Raven’s Home. The second episode, titled “The Big Sammich,” takes place shortly after the season opener and finds both Raven and Booker settling into their new lives in San Francisco. Here’s a recap of the most recent Disney Channel episode. 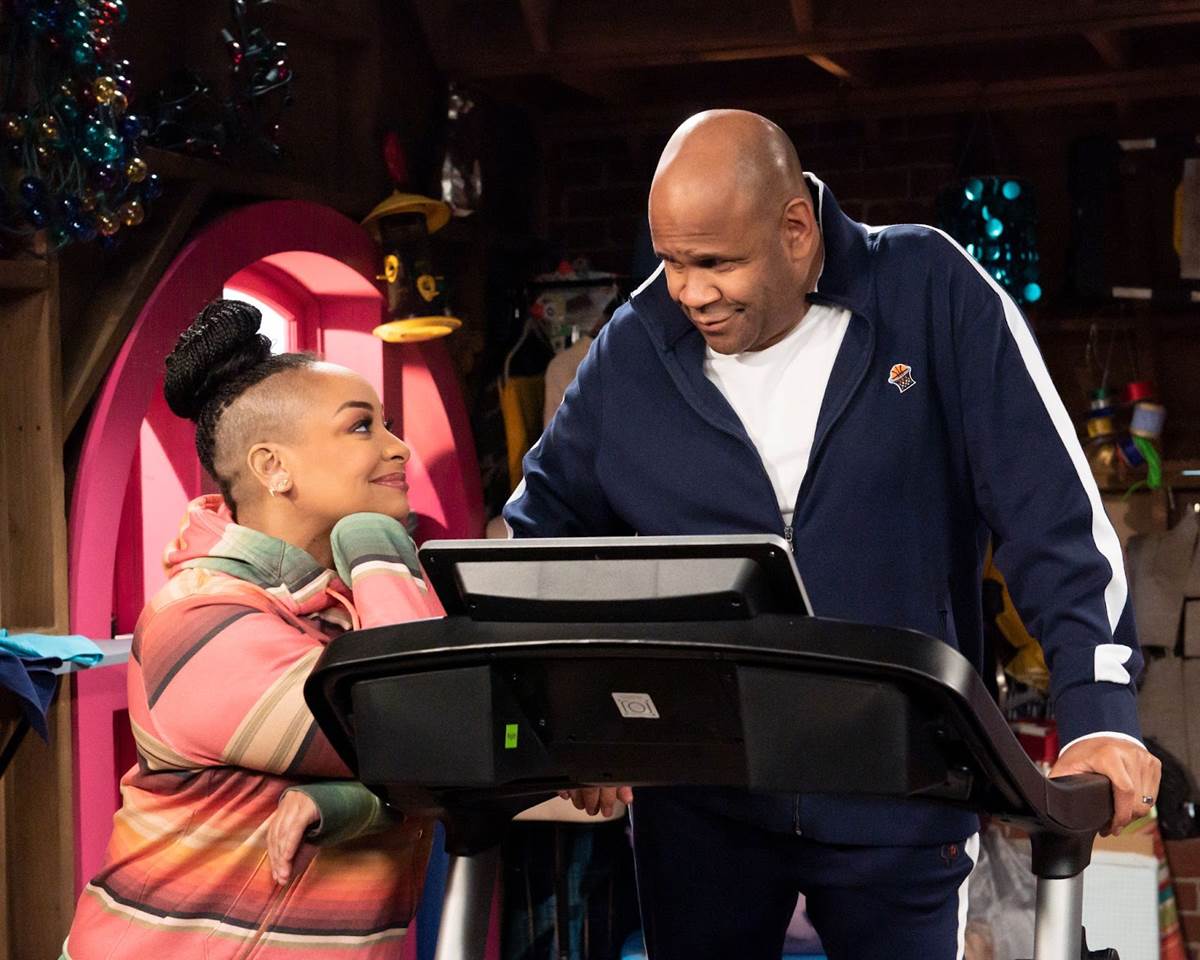 Booker is in the kitchen when Victor discovers that all of his meat and cheese has been thrown out, the ingredients for his “Meat mountain sammich,” which he eats when he watches basketball. He wanted to show Booker how to make one when Raven comes in from grocery shopping where she picked up only healthy foods. Raven tells her dad that she made healthy lifestyle changes a few months ago and if she can do it, anyone can. She is going to be his coach for both exercising and eating right.

Ivy has been so helpful around the house that Booker feels like he’s not doing enough to show his grandpa that he cares. When he sees a stained jersey in a laundry basket, Alice tells Booker that it’s grandpa’s favorite jersey and he hasn’t worn it since he got a big stain on it. Booker decides he will get the stain out, but he’s never done laundry before

Raven’s old attic bedroom has been transformed into a workout space for Victor and Raven motivates him while he runs on the treadmill. Their workout is interrupted by Alice yelling for help downstairs. Booker put too much soap in the washing machine and now the kitchen is full of suds. Raven scolds Booker after they clean up and Victor is upset that Booker took the stain out of his favorite jersey, saying the stain brought him happy memories.

Neil, who now works at The Chill Grill, stops by with a get-well pie for Victor, but Raven intercepts it and decides to hide the pie upstairs since she believes Victor is not above eating it out of the trash. When Booker and Victor end up along in the kitchen, Booker apologizes for getting the stain out of his jersey. Victor tells Booker that having a “Meat mountain sammich” would make him feel better. Later, Neil brings Booker a big meat tray from The Chill Grill so he can make the unhealthy sandwich.

Raven is alone in the workout room lifting weights when she has a vision of Victor saying “Thanks for making me a meat mountain sammich, Booker.” She drops a dumbbell on her toe and falls over in pain. In her struggle to get back up, Ravin grabs onto the shelf holding the pie and it raises up, sliding the pie down onto her face.

Downstairs Booker has indeed brought Victor his sandwich piled high with meat and Victor is so excited that he announces that he hasn’t had one since last Tuesday. Neil recalls that day was the last time he saw Victor, the day he had his heart attack. Booker has a change of heart and takes the sandwich back. “What about showing me how much you care?”, Victor asks. “That’s what I’m doing,” Booker respons, telling his grandpa that he wants him to be happy, but he wants him to stay healthy even more. Raven gets at the top of the stairs just in time to hear Victor say “Thanks for making me a meat mountain sammich, Booker. And thank you even more for not letting me have it.” Raven falls the rest of the way down the stairs, standing up with pie all over her face.

In the final scene, Raven and Victor sit on the couch talking about her diet plan. Victor says it’s hard to make such drastic changes overnight and Raven agrees that they will make these changes in moderation. He asks if there’s any pie left and she tells him there’s some left in the corner of the workout room. Victor gets up to grab some spoons.

Raven’s Home will be back next Friday, March 25th, with an episode called “Escape from Pal-Catraz.” Here’s the official episode description:

A trip to Alcatraz gets Booker, Ivy and Neil into trouble. After a vision of unsafe practices at the Chill Grill, Raven decides to run the restaurant to prevent a catastrophe.