After being introduced to Steven Grant in last week’s premiere episode of Marvel’s Moon Knight, fans got to see more the character’s past (other?) life come back to haunt him. The second episode, titled “Summon the Suit,” give us a whole lot more information on just what Steven is dealing with. 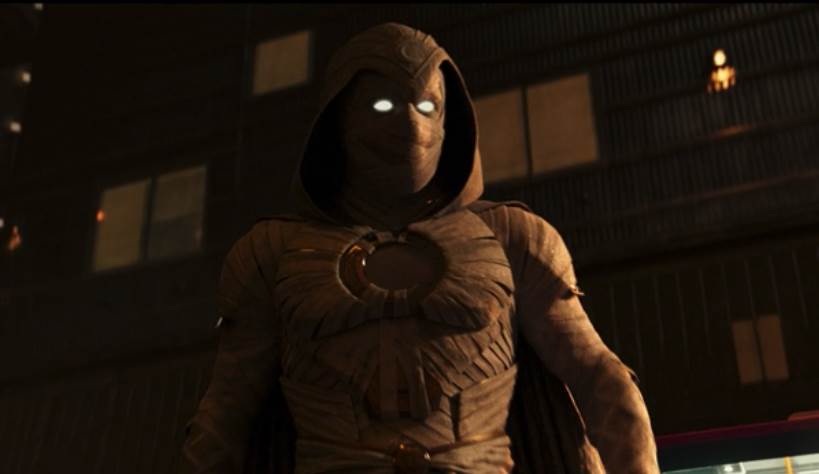 The episode opens with Steven seemingly waking up from a nightmare and jumping out of his bed, only to be stopped by his ankle restraint. He heads to hi bathroom mirror to try and talk to Marc, who has been showing up in the form of reflections, but gets no response.

He heads back to the museum, where he had been attacked the night before, and finds that it is closed due to some “burst pipes.” Steven talks to the security guard and gets him to show him the security footage from the night before. Steven tries to prepare him to see some disturbing footage, but when they watch it back, the creature that chased him doesn’t appear on the tape. Steven does call the creature an Egyptian Jackal, removing the thought that this was a werewolf. Before the footage ends, the two of them see Steven stop and look up at the camera. When the guard points out that it’s just him, he says “that’s not me.”

Steven meets with the museum HR department and has some doctors recommended to him because of his recent strange behavior. Steven seems on board with the thought of seeing a doctor, probably because of the face that he’s hearing voices from his reflection and being chased by giant monsters. The HR rep informs Steven that he is being fired and makes him hand over his name tag, symbolizing his loss of identity.

Steven meets with Crawley in the park again. He tells him about the phone and key he found in his flat in an effort to prove he’s not crazy. Crawley, of course, doesn’t respond but Steven acts as though he was told to investigate those mysterious items.

Steven eventually finds the storage unit that the key belongs to. Inside, he finds a cot and a bag. When he investigates the bag, he is disturbed to find a gun, some cash and the scarab from his first altercation with Harrow. He also finds an American passport with the name Marc Spector in it. When he takes a closer look at the scarab, it begins to hover off of its base and appears to be trying to point him in a direction.

His investigation is interrupted when Marc begins speaking to him again through his reflection, Marc tries to convince him to hand over control of their body but Steven refuses and demands answers. Marc explains that they are the avatar of Khonshu, which Steven finds ridiculous and blames the steak he ate on his broken mental state. Rather than handing over control, he threatens to turn Marc’s bag over to the authorities. However, when he tries to leave the storage facility he is chased by Khonshu.

Steven runs out of the facility and trips and falls into the street, where he is nearly run over by a woman on a motorcycle. The woman, as it turns out, is the Layla who he spoke to on the mystery phone last week. She gives him a ride home and yells at him for the stress Marc has put her through by disappearing and not answering her calls. She reveals that she is his wife, which surprises Steven.

They get to Steven’s flat and Marc begins telling him that he needs to get her out of there. The two try to piece together what is happening but Layla makes it clear she doesn’t believe this whole “act” and still thinks Marc is just doing a fake accent. Steven finally decides to show Layla everything in the bag but Marc interrupts him and tells him if she sees the scarab he’s going to get her killed. Steven stops but Layla forced her way into the bag and finds the scarab herself. She tells Steven they fought side by side to find that and accuses him of trying to keep it for himself. Steven tells her sha can have and tries again to convince her that he is not Marc. 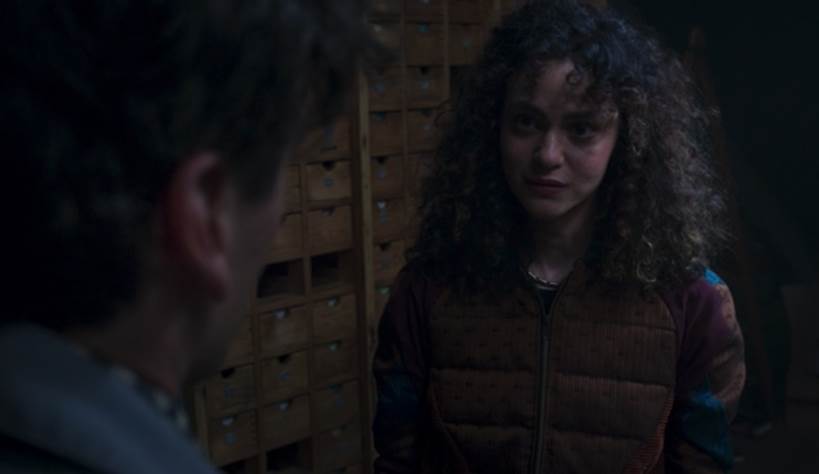 They interrupted by a knock at the door from two people who pose as police officers. Layla sneaks out the window with the scarab before they force their way into Steven’s flat. They go looking for the scarab but instead find the passport and put Steven in handcuffs.

While they drive to what Steven assumes will be the police station, they look up Marc Spector and find that he has killed multiple people. They specifically point out that he ziptied and executed and archaeologist, and of course Steven says he didn’t do that.

They pull the car into an alley way and it becomes clear they are not police. Steven tries to plead with a girl to get him out of the car but sees the same scale tattoo on her wrist, signifying that she is one of Harrow’s people. Marc appears again and tries once again to get Steven to give him control but he refuses.

Harrow gets Steven out of the car and has his people release him from the cuffs. Harrow appears to be friendly and lets Steven know he’s hearing the voices of both Marc and Khonshu. Steven sees Khonsu lurking in the shadows and the moon god tells him to kill Harrow. Harrow knows what Khonshu is saying and comforts Steven by letting him know Khonshu can’t do much without his help.

He walks Steven through his neighborhood, where his followers appear to be living, while Khonshu watches from a rooftop. Harrow offers Steven some food and the two sit down to talk. Harrow again points out what Khonshu is saying and Steven asks if he can hear him. Harrow explains that he is the former avatar of Khonshu, explaining why he knows so much about the situation. 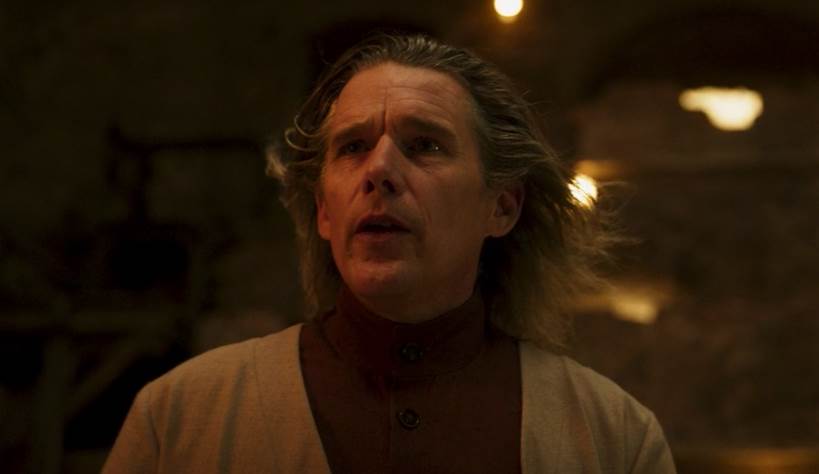 He tries to convince Steven that Khonshu only punishes people that have already done evil and that his actions come too late. He explains that Ammit punishes those before they can commit their evil deeds and he means to remove all potential evil from Earth. It’s again very reminiscent of the conflict between Captain America and Nick Fury in Captain America: The WInter Soldier.

Harrow tries to get Steven to hand over the scarab, which we now know leads to Ammit’s tomb, but Steven tells him he doesn’t have it. When Harrow asks who does, Marc again appears in a reflection and tells Steven not to give Layla up. Steven instead questions Ammit’s form of judgment and Harrow begins to threaten him, revealing that he is the avatar of Ammit and his staff contains some of her power. Steven tries to back away as Layla appears and reveals that she has the scarab.

Layla tells Steven to summon the suit, which only confuses him. They make a break for it has Harrow’s people chase them and he uses the staff to open a rift in the floor. We see a creature, like the one we saw in the museum, emerge from the rift.

Steven and Layla lock themselves in a room as Layla tries to give Steven a pep talk while Marc yells at him to give up control. The creature eventually breaks through the door and Steven yells about a jackal, but Layla can’t see it. It knocks Steven out of a window and he falls while Khonshu yells at him to summon the suit. When he hits the ground, he is wearing the Mr. Knight suit. 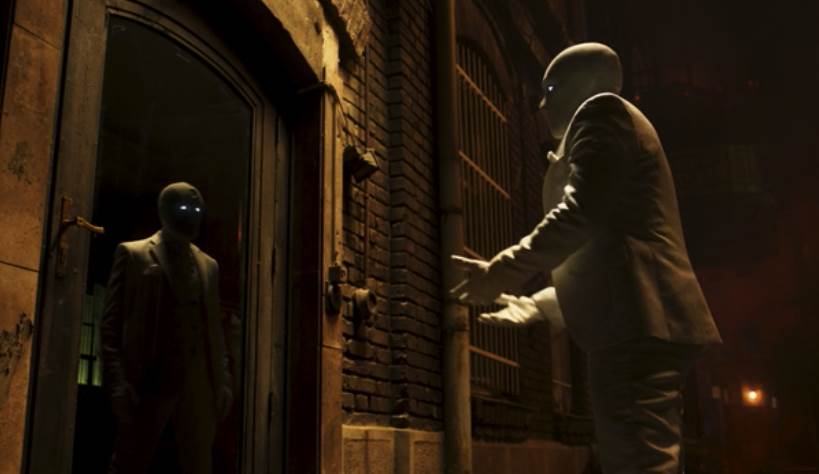 Steven stands and looks at his reflection, where Marc questions what they’re wearing. It appears the Mr. Knight suit has a different purpose here than it does in the comics. When Steven summons the suit, he becomes Mr. Knight while Marc becomes the true Moon Knight.

Steven checks his pockets for the scarab and instead pulls out his truncheon, a weapon commonly used by Moon Knight in the comics. Layla climbs down to fin Steven fighting the still invisible jackal. She eventually tries to help and is attacked by the jackal herself.

Stevne once again refuses to give Marc control and tries to fight the jackal himself. He lands a good punch as people watch on in the streets. However, the creature gets back up and gets the better of him once again. Marc appears and tells him to look around at the innocent bystanders. He tells him someone is going to get hurt and Steven final gives him control as he transforms into the more traditional Moon Knight.

He leds the jackal away from the public and we get to see the shot of him jumping across rooftops which flows so nicely into the Disney+ logo. Eventually, he stabs the creature with his throwing daggers and impales it on some kind of pike. He removes the suit and immediately becomes infuriated when he learned he doesn’t have the scarab. Layla watches as Harrow judges and kills a seemingly innocent man to take the scarab for himself.

Steven appears in a reflection this time and tries to take control back. Marc tells him something has happened that makes the one in control of the body stronger. Marc explains that Khonshu saved his life and when his servitude is finished, Steven won’t have to see him again. He also says Khonshu wants Layla as his replacement as his next avatar. Steven argues with Marc, telling him he doesn’t believe anything he says until he infuriates him enough to smash the mirror.

Khonshu appears and reminds him that Marc was a corpse when he found him, saying his body belongs to him. He tells Marc that Harrow has the scarab and Marc promises to find another way to get to Ammit’s tomb first. Khonshu confirms for us what Marc said earlier, that Layla is the candidate for his next avatar. Begrudgingly, Marc says he will do whatever it takes to get this job done and the next scene shows that he is now in Egypt as the episode comes to a close.

The deeper we dive into the battle of psyche between Steven and Marc, the crazier this show gets. This episode also sees Khonshu become more of a character and not just a voice in Steven’s head, which is exciting as he should have a huge role to play going forward. Plus, the first sighting of Mr. Knight is a huge plus for this week’s installment. Now, we just have to see how Marc plans to beat Harrow to Ammit’s tomb.