We’re less than a month away from the highly anticipated theatrical release of Marvel’s Doctor Strange in the Multiverse of Madness. In conjunction with tickets becoming available yesterday, Fandango published an interview with director Sam Raimi, who shared some interesting information about the upcoming film.

Probably the most interesting response Raimi offered during his interview with Fandango, came when he was asked about potentially seeing multiple variations of Wanda as the characters jump throughout the multiverse.

“Yes. The movie is a journey into the multiverse, so you do see different iterations of Benedict Cumberbatch's Doctor Strange, and even Lizzie Olsen's character of Wanda Maximoff,” Raimi said. “So, the actors have to play that. It's a great challenge for them and great fun to direct them playing these altered versions of themselves.”

With two of the MCU’s heaviest hitters serving as the primary focus of this movie, of course Raimi was asked who is more powerful – Doctor Strange or Wanda?

“Well, I think Wanda's magic, from Marvel lore, is more powerful than almost any of the other characters in this picture, but Doctor Strange has the knowledge of the mystic arts that Wanda doesn't have, and he's got the help of Kamar-Taj,” Raimi said. “If you were to pit them against each other, different altered versions of themselves … there could be a Doctor Strange out there that's more powerful than our Wanda. Or there could be a Wanda out there who is more powerful than our Wanda here. So, because of these altered versions, it's all a mixed bag of possibilities.”

As far as the potential surprises the multiverse might have in store in this film, Raimi pointed out that in Spider-Man: No Way Home, we saw characters from other universes come to ours, while this film will see familiar characters travel to other universe, which could lead to some fun.

“It's going to be a continuation, but that, I think, is one of the biggest appeals. Finding other realities, and how they rhyme with our own, or how they are completely the opposite, or variations thereof. I think therein lies the interest of this picture.”

As for one specific surprise, Raimi simply said he couldn’t give away anything regarding whether or not we will Professor Charles Xavier in this film.

“I couldn't promise you that Patrick Stewart's in the picture. That's all that Marvel will let me say.”

One character Raimi is allowed to talk about though is America Chavez, who he says is a perfect compliment to Doctor Strange.

“Well, she adds an exciting spirit of youth. She's a newcomer to her powers and to our world. She actually comes from another universe. I think she brings a sense of lightness and youth,” Raimi said. “Benedict Cumberbatch's Doctor Strange can be a very egotistical and stuffy character, a know-it-all. She just flies in the face of that. She doesn't really have respect for him originally. She sees right through the fronts that he puts up. She's much more down to earth and one of us, and she doesn't take his attitude. I don't think he likes that at first. So, she creates a contrast.” 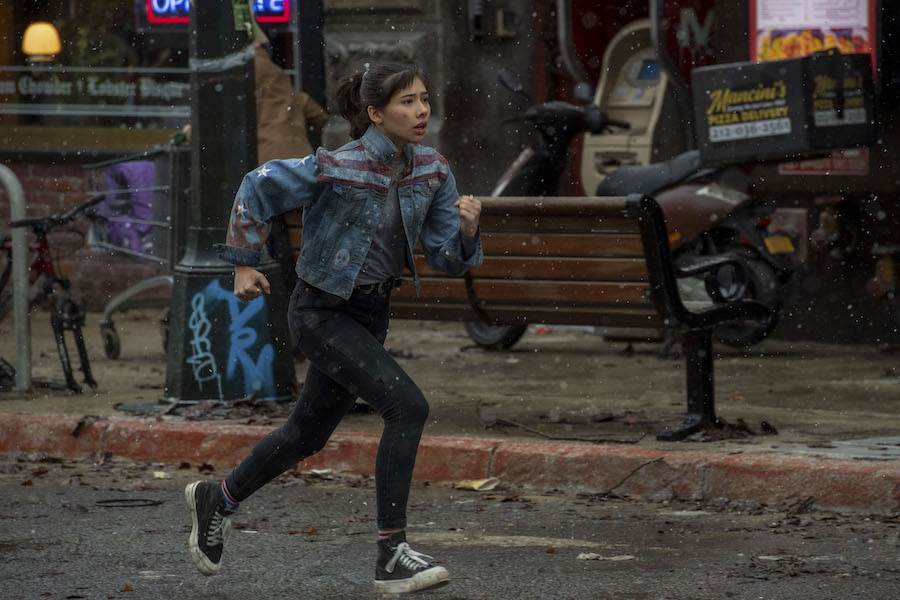 Early on, Doctor Strange in the Multiverse of Madness was being touted as Marvel’s first horror movie, and while it’s not going to scare away the typical Marvel audience, Raimi did promise there are still some spooky elements in there.

“It's unknown what you'll find in the multiverse. It's within that unknown that suspense and darkness exists,” Raimi said. “A tool to titillate the audience's fear. Plus, Doctor Strange in the comics has always dealt in universes and dimensions that were quite spooky, so we tried to bring some of that into this film.”

Raimi gave a lot of credit to the actors in this film, particularly Benedict Cumberbatch and Elizabeth Olsen. He explained that watching them portray various versions of their familiar characters was one of the most exciting things for him.

“I really like them interacting with each other very much. I think that was the most interesting thing — to see Benedict Cumberbatch bring out a part of his personality that was slightly unique to create one of his altered selves. Or to watch Lizzie maybe bring a darker part of herself out to create an altered version of herself,” Raimi said. “The slightest tweaks they could come up with made it very interesting for me.”

As for another actor Raimi has worked with in the past, the director didn’t rule out the possibility of reuniting with Tobey Maguire for another Spider-Man film in the future.

“I've come to realize after making Doctor Strange that anything is possible, really anything in the Marvel universe, any team-ups. I love Tobey. I love Kirsten Dunst. I think all things are possible,” Raimi said. “I don't really have a story or a plan. I don't know if Marvel would be interested in that right now. I don't know what their thoughts are about that. I haven't really pursued that. But it sounds beautiful. Even if it wasn't a Spider-Man movie, I'd love to work with Tobey again, in a different role.”

And finally, Raimi also shared his thoughts on the possibility of ever working with Marvel again beyond Doctor Strange in the Multiverse of Madness.

“It's like the world's best toy box to be able to play at Marvel,” Raimi said. “I'd love to come back and tell another tale, especially with the great management they've got there.”

Doctor Strange in the Multiverse of Madness comes to theaters on May 6. Tickets are available now.