It’s time to go back to school in the fifth episode of Season 5 of Raven’s Home on Disney Channel. The new episode features a few returning favorites from That’s So Raven, including Raven’s old stomping grounds at Bayside High and her arch-nemesis Alana, played by Adrienne Houghton, who was also one of Raven-Symoné’s costars from The Cheetah Girls. Here’s a recap of “Clique Bait.” 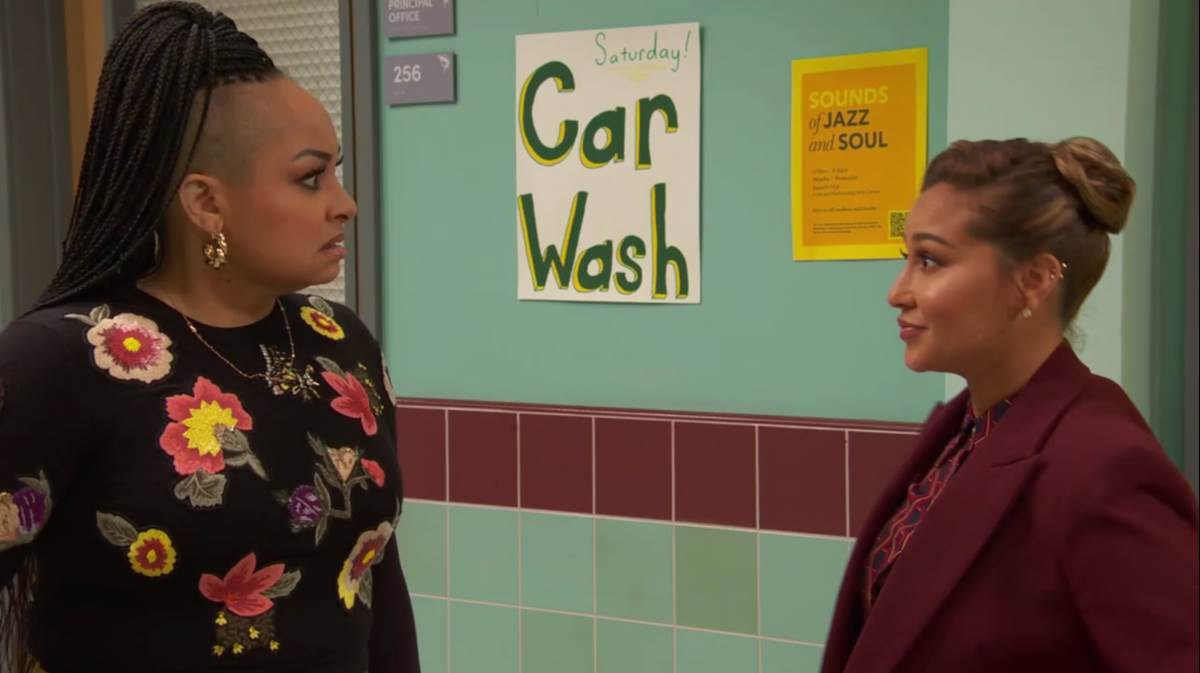 Booker is trying to make a good impression on his first day at Bayside High, so when Ivy gets to the house and tells him he looks “Nice,” he decides that’s not good enough and goes upstairs to change. While he’s upstairs, Ivy finds out that Alice has Ms. Raider for school this year and mentions that she’s hard on her smart students, making Alice nervous. Booker’s next outfit is the same thing Neal is wearing when he comes back downstairs, so he goes back up to change. On his third attempt, he is wearing the same thing Raven brags about wearing on her first day of junior year. Booker even sees a photo on the wall of his mom in a similar outfit. He goes back to change yet again.

Alice decided to stay home from school, convincing Victor that she lost her voice. Raven finds that strange, especially since she heard Alice talking earlier. She asks her dad why he never let her stay home from school, he says it’s because he knew she was up to something. Raven thinks the same is true of Alice.

At school, Booker is upset when Cami barely notices him in the hallway since he decided to stay in San Francisco because he met her. At lunch, Booker gets called over to her table where the cool kids sit. She asks what he did in Chicago and when he tells her he rode his bike, she laughs as if that’s boring. He corrects that it was his motorcycle and when she asks if he’s a bad boy, he lies and says that his last principal was afraid of him and so is his mother. “Okay bad boy, well you better watch out for our principal, she is crazy strict, but I’m sure you aren’t phased by that,” she says. When Booker steps away to take a call from Raven, we hear Cami tell her friends that Booker might come in handy.

The next day, Alice is home again and when Raven hears her talking in the other room, she rushes in to catch her faking it. Instead, she finds that Alice has created a soundboard to communicate without her voice. Victor brags about how smart Alice is and asks Raven to get her some ice cream. On her way to the kitchen, Raven gets a vision of Victor saying “This has gone far enough, do I have to ground you, young lady?” She takes this to mean that Alice really is faking it and is determined to expose her.

At school, when Cami invites Booker to sit at her table again, he drags Neal and Ivy along with him. Ivy is reluctant and once seated, Cami asks Ivy what she’s planning for her birthday. This upsets Ivy and she gets up and walks away. Booker goes after her to find out what’s wrong, but she doesn’t want to talk. Booker believes that Ivy is jealous of Cami.

Later, Cami catches Booker at his locker and tells him she wants his number, but then remembers that the principal took her phone when she was caught texting in the hallway. She suggests that a bad boy like Booker shouldn’t have a problem getting it for her. “I’d go in and get it myself, but she’s watching me like a hawk,” she tells hiim. She tells him it has a gold case and he can put his number in it before giving it back to her.

Booker sneaks into the principal’s office and finds a bin of cellphones, many of which have gold cases. He ducks under the desk when the door begins to open, but it’s actually Ivy and Neal, who’ve come to try to stop Booker from getting Cami’s phone for her. Ivy heard Cami bragging about sending Booker to get her phone from her mom’s office. Ivy reveals that not only is Cami the principal’s daughter, but that she’s grounded, which is why her mom took her phone. Just then, Principal Alana Rivera opens the door and catches all three of them. As the new kid, she asks Booker his name and he says “Booker Baxter-Carter.” Principal Alana asks if he’s related to her old crush, Devon Carter, and he boasts that Devon is is father. She reveals that he was stolen from her by her nemesis, Raven Baxter. “I don’t know that lady…”

Raven has spent the day trying to trick Alice into talking on video to prove that she’s lying to her father. Her failed attempts included showing her a scary video, making her a disgusting smoothie, and lastly trying to cut the hair of her doll Tasha. It was during this last attempt that Raven caught Alice saying “That was close” to her doll. Raven finds out that Alice is nervous about her new teacher, but she convinces Alice that she’s smart and tough and will be fine. Their conversation ends when Raven gets a call that Booker is in the principal’s office at school.

While waiting, Ivy tells Booker why she doesn’t like Cami. In the 4th grade, she was planning a princess-themed birthday party and that Cami took her idea and hired every princess in the city. Nobody came to her party as a result. When Principal Alana comes back to her office, Booker asks her to let his friends go, who had nothing to do with him sneaking into her office. She agrees to let them go. Raven arrives and is shocked to see Alana as the principal. “Hello, Raven, I haven’t seen you since high school,” Alana says. “And yet it still feels too soon,” Raven replies.

A short time later, Booker is back in the hallway and Cami comes to him for her phone. Booker accuses Cami of setting him up and she says she figured this would be no big deal for a motorcycle-riding rebel. He pulls out her phone and hands it to her, revealing that he added his number to it. In the background, Raven and Alana watch and promise to not let their kids get together.

When Raven gets back, she finds that Alice has found the videos Raven took trying to scare her into talking and shows them to Victor. Raven’s dad is angry about it and threatens to ground Raven, fulfilling her vision. When he asks Raven to apologize, she pretends she just lost her voice and leaves.

Raven’s Home will return on April 15th with “21 Lunch Street.”