After last week’s episode saw the debut of Mr. Knight and Marc taking back control of the body, the race to Ammit’s tomb is on in this third episode. With Harrow in possession of the scarab, Marc has some catching up to do before Harrow releases the reckless deity. 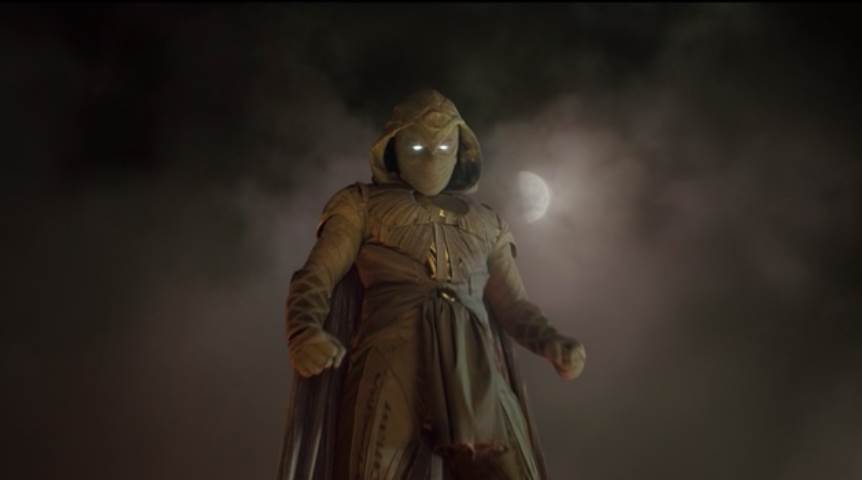 The episode opens with Layla meeting with a woman named Lagaro. She clearly has a history with this woman and she even appears to have known her father. Lagaro is helping Layla make a fake passport as she prepares to go after Marc and find the tomb of Ammit herself. Lagaro mentions the fact that Layla’s father used to call her “his little scarab,” playing off of the item they’ve been after in the previous two episodes.

After the Marvel scroll, we see Harrow and his people in the desert. Harrow follows the aforementioned scarab which suddenly points directly down into the sand, informing him that they have found Ammit’s tomb. He calls out the finding to his people and they cheer in celebration. One of his people informs him that Marc is in Cairo and tracking them.

We then see Marc running after someone on rooftops in Cairo, but he doesn’t get there in time. Three men with knives kill the man and Marc says he needed to talk to him. He gets in a fight with the three men and handles himself very well as he is clearly a very skilled fighter even without the suit. It’s worth nothing that one of them is a child and Marc shos the boy some mercy in the fight. After a while, Marc gets one of the men’s knife and hold it to his throat before hearing Steven’s voice telling him not to do it and catching a glimpse of him in the reflection in the knife.

Marc then blacks out and wakes up in the back of a cab. He asks the driver where he is taking him and he says the airport. Marc yells at him to stop the car just as he sees one of the men and the child exiting a building. He chases them on foot and eventually catches the man and beats him some more. Once again though Steven’s voice tells him to stop. As Marc pauses, the other man hits him in the back of the head and the first one knocks him out with a punch.

When Marc wakes up again he sees that he has stabbed the man that punched him and he watches the man fall to the ground dead. He turns to see the other man already dead and asks Steven what he did. Steven says it wasn’t him and Marc questions who it was. He then sees the kid on the gound, injured. Khonshu tells him to take him to the edge of the cliff they are now at and he reluctantly obliges. He dangles the boy by his scarf over the ledge and asks where Harrow is, but the boy simply says “praise Ammit” and cuts himself free, falling to his death.

Marc gets into an argument with Steven over which one of them killed these men. Marc asks Khonshu for advice on what their next move should be and suggests summoning the other gods. Khonshu informs him that the gods have banished him before and if he summons them again they might trap him in stone. He eventually agrees to call for them though and blocks out the sun to do so. Harrow recognizes this as Khonshu’s work and yells at his crew to keep digging. 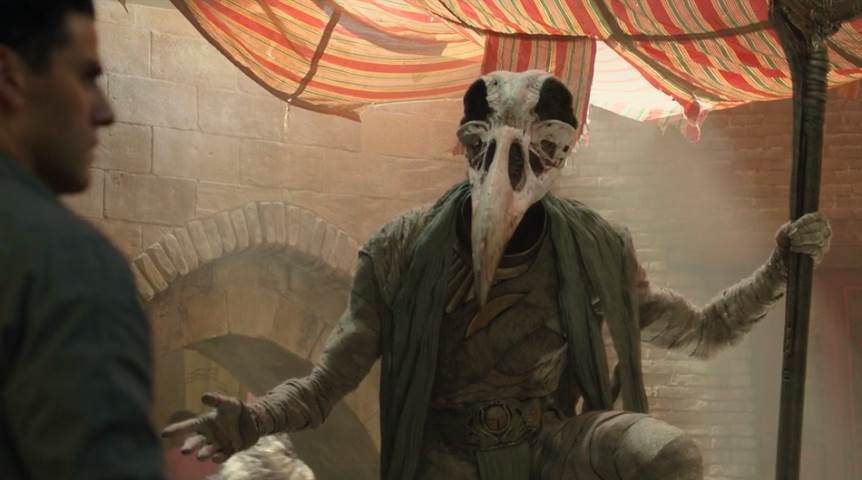 A portal opens up for Marc to get to his meeting with the gods but Khonshu doesn’t join him. Instead, he simply informs him that he’ll be there. As Marc walks through his portal, he hears a giddy Steven say they’re inside the Pyramid of Giza. The avatars of the other gods arrive one by one and Yatzil, the avatar of Hathor, presents herself as a friend and hints at a history between Hathor and Khonshu.

The other gods call for the meeting to begin and Yatzil tells Marc not to fight what’s about to happen. The gods take over the bodies of their avatars one by one, including Khonshi, who takes over Marc. Khonshu makes an argument that the gods need to return to the world and do more than their avatars can. After they refuse, he gets back to his primary purpose of accusing Harrow of conspiracy to release Ammit.

The gods summon Harrow who objects to Khonshu’s claims. Harrow instead turns the tables and lets the gods know of Marc’s personality disorder. Marc snaps and tris to throw a punch at Harrow but the other gods stop him. They release Marc from Khonshu’s control and ask him if he is, in fact, unwell, to which Marc admits that he is. When he tries to turn attention back to Harrow, the gods simply rule that he has committed no offense and their meeting is concluded.

This is a very ironic situation. The whole plot of this show is Marc trying to keep Harrow from releasing Ammit because she punishes people before they commit their crimes. However, he is trying to punish Harrow before he can commit the crime of releasing Ammit.

After Harrow and the other gods’ avatars leave, Yatzil approaches Marc again. She tells him there is another way he can find the tomb of Ammit. She sends him after Senfu’s sarcophagus, which will then lead him to the tomb. She also tells him it was recently sold on the black market, giving him a starting point.

Marc, now in typical superhero incognito mode, asks a street vendor about the sarcophagus but is interrupted when Layal surprises him. Marc tells her she shouldn’t be there, and looks up to see Khonshu watching them from a rooftop. Layla says she can help him find what he’s looking for and he agrees to let her. 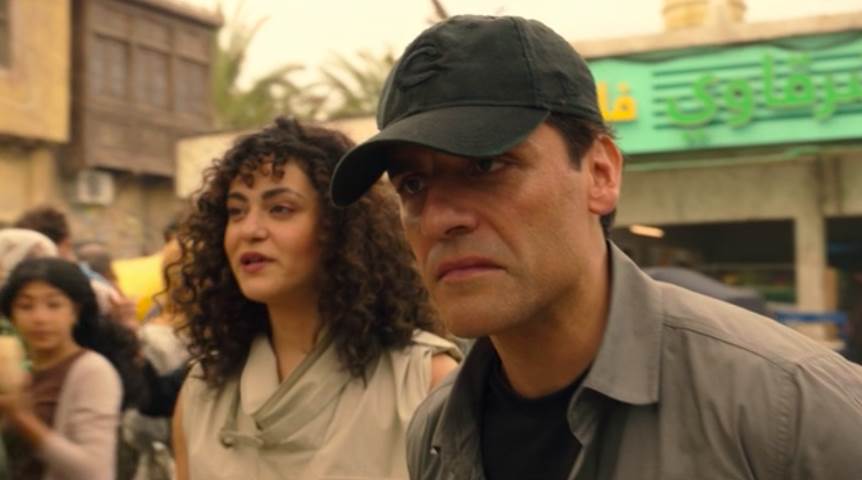 On a boat, Marc asks Layla what her plan is. Layla tells him she has a contact named Anton Mogart who has the sarcophagus. In the comics, Anton Mogart is also a villain and a thief known as Midnight Man, who has worked with Moon Knight partner-turned-enemy Raul Bushman.

They share a brief somewhat happy moment where they think about their wedding and Layla tell him she wishes he told her about Steven. Marc shuts the door quickly though, apparently remembering he needs to distance himself from her, for her sake.

As their boat docks at Mogart’s, they notice a boat following them and assume it is Harrow’s men. They turn to head into Mogart’s party and meet with someone Layla clearly knows. The man interestingly mentions her an Anton will have a lot to talk about “after Madripoor.” Marvel fans may remember Madripoor as the city visited in The Falcon and the Winter Soldier. What kind of business was Layla doing in Madripoor? Has she crossed paths with the Power Broker?

They meet with Anton and he leads them to the sarcophagus and allows them to take a look at it on their own. They read the inscriptions inside but Layla can’t crack what it means. Steven tells Marc the information i coded and he asks Layla to keep Anton and his men buys while he and Steven try to figure it out. Steven of course lobbies to get control of the body but when Marc refuses, he tells him how to break the code.

Marc is interrupted by Anton’s guard and he sees that they have guns on Layla. Anton is interrupted by the arrival of Harrow and his men. Harrow offers a display of Ammit’s power as well as the scarab. He also teases that Marc had something to do with the murder of Layla’s father but doesn’t actually give them any real information. He uses his staff and Ammit’s power to seemingly destroy the sarcophagus, while Khonshu urges Marc to summon the suit.

The guards notice that Marc is gone and Layla looks up to see Moon Knight standing on top of a building. A lengthy fight scene ensues, during which Marc fights Anton’s guards while Lalya fights off the man she knows in order to get the valuable piece of the sarcophagus. Steven also takes over for a brief moment and Moon Knight becomes Mr. Knight. However, he doesn’t fare very well in the fight and hands control back over to Marc. 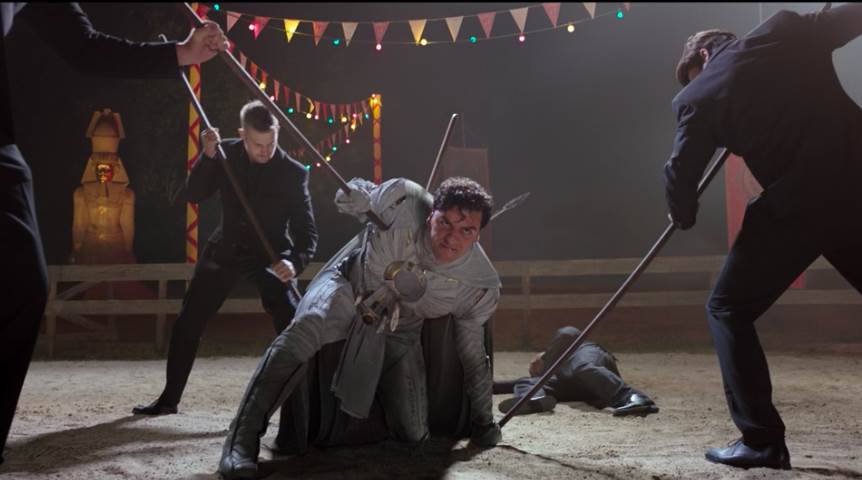 After Marc and Layla eventually get the better of Anton and his guards, they head out to the dessert with their new clues from the sarcophagus. Layla questions Marc about what Harrow says and Marc assures her he was just lying. Layla points out that she keeps learning secrets about him and it’s like she doesn’t know him and he agrees.

They try to piece together the puzzle in the desert but when it doesn’t work, Marc becomes frustrated and Layla tells him they need Steven. He reluctantly allows Steven to take over and he quickly solves the puzzle. Layla seems happy to see Steven, which could only possibly lead to a somehow even more complicated relationship for them.

Steven tells her that hey still have the problem of today’s night sky being very different from what it was 2000 years ago, when the guide was created. Khonshu tells him he remembers what the sky looked like when the guide was made and he tells Steven he needs his help.

The moon god begins to literally turn back the night sky and shows Steven how to help him. He does warn him though that the gods will imprison him and he needs to tell Marc to free him. Together they set the sky to exactly how it was 2000 years ago, which is noticed by everyone, including Harrow and the avatars of the other gods. The gods begin a ritual that will lock Khonshu in stone.

Khonshu begins to fall and the suit begins to disappear from Steven, but Layla gets the coordinates of the tomb. Khonshu completely disappears and Steven collapses, now back in his normal clothes. Meanwhile, Harrow enters the chamber where the gods have imprisoned Khonshu. He holds the idol of Khonshu in his hand while he tells him he enjoyed being his fist and dealing out pain. He also says he is going to do what he could not before the episode comes to a close. Does Harrow have plans beyond just releasing Ammit?

This was the most action-heavy episode of this show yet and it was a lot of fun to see Marc Spector and Moon Knight in action. Things also appear to be reaching a boiling point as Harrow is getting very close to his goal (or at least his initial goal) of releasing Ammit. With three episodes remaining, it will be interesting to see how things a paced out and where this story goes.