They’re baaaack. After thirty seasons of their historial E! Network Reality show, Keeping Up with the Kardashians, the famous family declared an end to broadcasting their lives on television. They were tired of “filming,” saying goodbye to their crews they’ve grown to adore, and blasting off fireworks for a tremendous finale. But, then Hulu called.

Now, only 298 days later, The Kardashians return to the small screen once more. And I’m not surprised, are you? However, this time it’s on their own terms.

The premiere episode of The Kardashians already breaks the E! mold: we’ve got a drone footage accompanied by the stylings of Silk Sonic. An undefeatable combination. The opening credits of the sisters are only comparable to those of superheroes. (The Incredibles are quaking.) After 298 days, we’re catching up in this sequence: Kourtney is happily with (then) boyfriend Travis Barker, Khloe’s awaiting construction on her new house on the phone with her maybe/maybe-not ex-Tristan Thompson, Kendall is practicing her sound baths (naturally),  Kris is holding the fort down at Kylie Cosmetics, Kylie is behind the scenes at a shoot, and Kim is leaving work for family. The gang's all here and there’s a party at Kim’s.

With every entrance into Kim’s home, it is made more and more clear that The Kardashians took some notes from our friends at Selling Sunset. The slow motion walks, the hip beats to their struts – they noticed and it’s already a clear improvement from their usual E! formula. But, what remains as impactful as ever?  The confessionals, of course. Don’t you worry. The show opens with Kim taking the hotseat to recap balancing her life as a mother, a student, and an entrepreneur, but seems to be most excited about cleaning her kids’ playroom.

As Kylie shows up, she is pregnant and so excited to be a mother, but her and Travis are keeping the gender a secret. (Fast-forward to nowadays, when they still haven’t even revealed the name post-birth.) Kim presses her, but it remains a secret. As the family piles in, they begin to grab food from the buffet of chicken nuggets and fries while they hangout by monochromatic, ball-pit slides. You know, just the average backyard family barbecue.

The first batch of drama unfolds as Kim’s son Saint brings over his iPad laughing hysterically. Kim’s eyes grow confused, then shift to concern as she identifies the meme of her crying face. It’s accompanied by some clickbait captions about her past on her little boy’s game. It’s a moment that encapsulates the long road ahead for the lives of these extremely famous children and a reality that stings beyond the camera lens.

During a brief interruption, Kendall crashes the party she didn’t attend with a confessional revealing that she bailed because she had COVID. She assures the audience we’ll still get her all season. Yay, more sound baths! However, the interruption doesn’t last long because Kim announces that she will be hosting Saturday Night Live (which we now know she knocked out of the park and also happened to be the place where she kissed her now-boyfriend Pete Davidson for the first time). The table meets her excitement (minus Kourtney, of course) and encourages her that “she actually is funny.” Opening up her divorce, Kim considers asking Kanye to open for her, but she lands on making this her own moment. They’re still navigating how to be good parents and she would prefer the attention to be on her performance, despite her intense nerves.

The family discusses Kourtney’s new relationship as a B-roll of the couple’s PDA plays. Khloe asks a question the fans were already wondering: “Did anyone invite Scott?” While she and Kim gossip in the kitchen, Kourtney cuts in to remind everyone the pair have been broken up for seven years, and everyone needs to cut her some slack for the new beau.

But, we’re hearing from Scott anyway. Visited by his bff-sister Khloe, Scott later opens up about witnessing this new facet of Kourtney’s life. Khloe asks him if he’s ready to actually start a “real relationship” (sorry to Sofia Richie) and he says it would have to be an age appropriate relationship. It’s a rough revelation to watch unfold and luckily, it’s not a long one. Scott continues to share that he feels left out of the barbecue when he has no other family, but Khloe insists his lack of invite may have saved his heart. He decides he would rather “be acknowledged” even if it means being hurt. 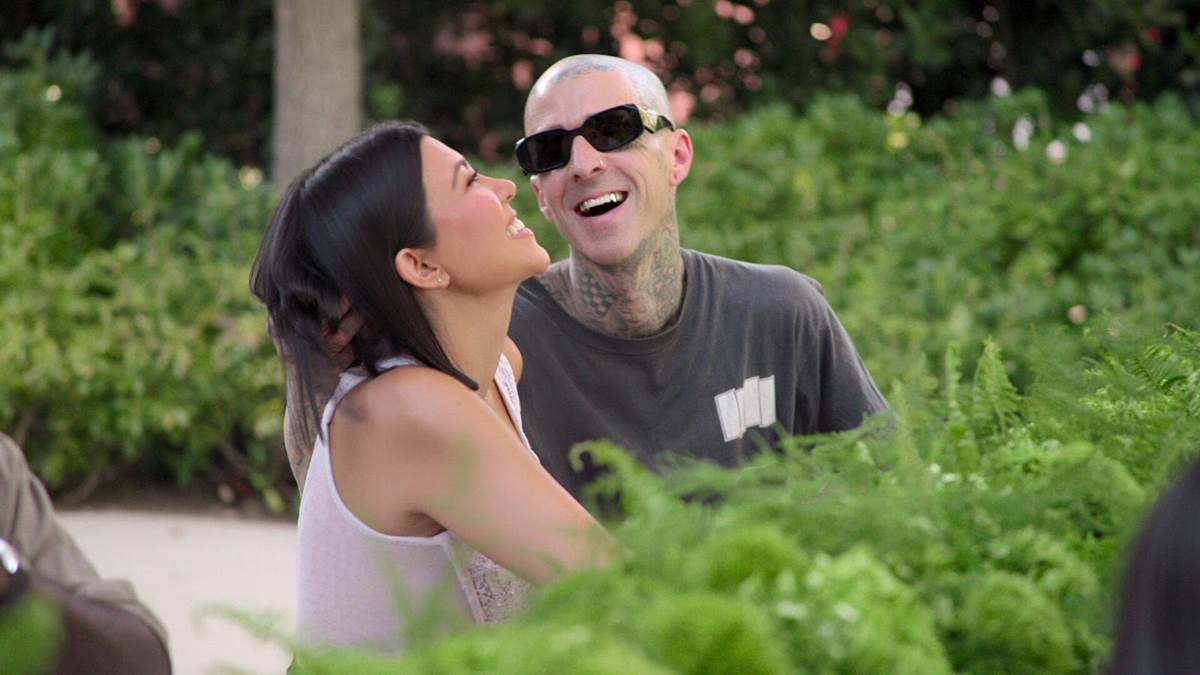 Moving to the Kravis lovenest, Kourtney delves into their origin story. After years of “playing house,” the relationship finally started transitioning into a flirtation and during a movie date, Kourtney broke the tension and made the first move. Travis, a father to two children of his own, is a natural with Kourtney’s kids. Penelope and him share an unevenly matched drum-battle and it’s quite adorable. It seems like a very beautiful and bright future for the family. (Spoiler alert: Rumor is – they’re already married!)

Khloe and Tristan briefly take center stage and they’re not… really… together. But, that doesn’t mean Tristan isn’t trying! He’s in therapy and working on his personal health, trying to overcome his troublesome past of infidelity. The pair have some of the best banter between anyone on this show, so it’s unfortunate how rocky their dynamic has been over the course of their relationship. They don’t speak much of certain futures, but Tristan brings up growing their family together.

While preparing for SNL, Kim declares none of her family members are safe for the sake of comedy. She’s ready to prove everyone wrong about their preconceived notions of her. Especially Debra Messing (who she iconically refers to as “the girl from Will & Grace”). Kim’s friends are reaching out to her for advice and support which feels great, but also adds some pressure to the situation. In a moment sure to make everyone squeal, the unknowing (?) Kimberly name drops Pete Davidson pre-relationship and says in contrast, he was the one able to provide her some comfort: “Can you read cue cards? You’re good.”

The girls go to lunch! Making quite the entrance, the conversation is candid per usual (different title, same family), but segues into Kanye chat. He wants to quit everything and become Kim’s personal stylist. It’s been their thing; Ye has always kept Kim updated with fashion trends even before they were together, however Kim is feeling a need for independence.

The food hits the table and so does their next subject. Khloe relays her conversation with Scott to the table, and Kourtney explains she’s already caught up from his personal account. As headlines flash, Kourtney recounts Scott's DMs about his disdain for her new relationship leaked by her ex-boyfriend. Before the conversation ends, she raises a fair point: “after years of bad behavior” he still gets an invitation.

Back at her house, Kim gets a call from her lawyer who explains that she can sue for the incident with the “leaked footage” clickbait on her son’s iPad game. This Kim offers a far more healed and nuanced outlook on the ordeal that has been held over her head for 20 years. “This mistake,” she begins, “or is it a mistake?( …) It’s not the most scandalous thing and I’m not going to be made to feel that way. I’m just human.” Surrounded by her sisters and mom, they rally behind her to defend her reputation as Khloe reminds them, this is just as they did on season one of Keeping Up.

In a moment of exterior breaking, Kim begins to cry on the phone with Kanye. “No way is this going to happen to me again,” she says. “I just want it gone.” Kanye consoles her with some soothing words and reminds her that she’s the one with the power. And just like that she’s on the phone with her lawyer and renergized, “I have all the time, all the money, and all the resources to burn them all to the f***ing ground.”

A new episode of The Kardashians drops every Thursday, only on Hulu.