Keeping with this weekend’s tradition of telling backstories via flashback, Amphibia treats us to a doozie featuring King Andrias, as well as a throwback to a character we’ve seen before. 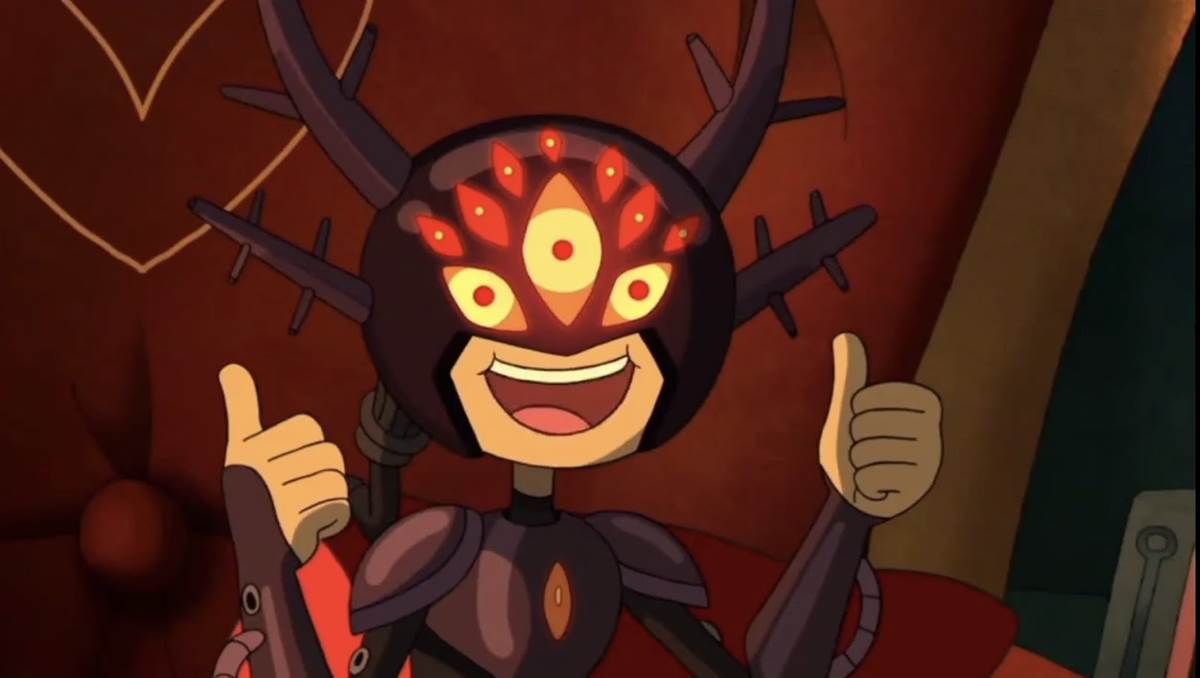 The Root of Evil

Anne, the Plantars, and Loggle are out recruiting more help and getting more to join the rebellion against the king. Hop Pop uses what he knows and tries to get people to join up by sharing the thrill of gardening. Realizing this method isn’t going to work, Anne emphasizes that joining will get them built like Loggle, who has a remarkable physique since joining up.

Sadly, Hop Pop is now well aware that gardening isn’t “cool and hip,” and the group set off for home. A tracker belonging to King Andrias appears and latches itself on their wagon while Hop Pop is lamenting for a place where people care about gardening as much as he does.

Suddenly, the group finds themselves plummeting down into a canyon where they awaken and find themselves in a cultish society where their primary focus is…gardening.

Apparently, whoever found them has dressed them in (quite comfortable) white robes and are welcomed to the peaceful, off the radar town of Gardenton. Hop Pop is blissfully unaware of what’s going on, happy to have found a place that is purely about gardening, but the others find the town and its residents quite unsettling.

When Hop Pop tries to speak to the town’s mayor, the residents are happy to oblige and take the group to a rotting corpse of a frog covered in mushrooms, where it’s revealed that Apothecary Gary (whom we’ve seen controlling brains in previous episode) is the one in charge here and surprise! The entire town and its residents have been brainwashed…maybe? To catch us up, we are treated to a monologue sharing that Gary found a new host and searched throughout Amphibia looking for a place to regrow and eventually found this small village of residents and transformed it into Gardenton, where his spores now cling to the residents but insists he is not brainwashing them and instead has a relationship where they help each other. However, they are still on edge given the tumultuous past between Hop Pop and Gary and try to make their escape, which Gary doesn’t allow to happen.

Just as all hope appears to be lost, a beeping noise is heard and the tracking drone calls for backup to destroy this resistance base.

As Andrias’ soldiers arrive, Anne sees the opportunity to make a break for it, which they take before they realize they can’t just let this town get destroyed and go back and help. Because of this act, even though Gary is still ready to take out Hop Pop and the gang, they end up recruiting Gary and the residents of Gardenton to become part of the rebellion.

The Core and the King

The real meat and potatoes of the episode is in the latter half where we meet Darcy, or Dark Marcy, who is the evil Core now on its host, Marcy. However, she needs a bit of a reboot and while that happens, King Andrias stares longingly at a torn painting of himself, a frog, and a toad. Let the flashback commence.

Turns out that he, a frog named Leif, and a toad named Barrel were once the best of friends. Inseparable in every way, living in harmony together in Newtopia.

King Aldrich, Andrias’ father, suggests that despite how close his son and his friends are, they will only end up using him for his royal powers. He then introduces his son to the Core, the collective minds of all of Amphibia’s greatest leaders, implying that this now should be his only friend. It’s then that Aldrich gives his son his primary mission: to invade Earth, rid the planet of its occupants and mine it for its resources.

After being given a key, Andrias decides to show off the Music Box to his friends. At a point, Lief touches the stones and is treated to a terrifying vision of the destruction of Amphibia. Using this knowledge, the trio approaches Aldrich suggesting they don’t use the music box to invade anymore worlds. However, Aldrich refuses to change his plans, instead insisting that Andrias’ friends are traitors and uses this moment as a “see, I told you” situation reminding Andrias that his friends are only out to abuse his power. Aldrich reminds his son that the music box is their birthright and everything must continue as planned.

Lief tries to convince Andrias otherwise but instead is still hearing the echoes of his father and argues with his friend. Though they seemingly make up, Lief steals the key to access the music box. When Andrias EVENTUALLY realizes this it is much too late, and discovers Lief stealing the music box and making her escape. He also destroys his friendship with Barrel because he could have stopped her and he chose not to. She takes the music box to the Olms and tells them of her vision.

Time passes and we find out through Aldrich that the box is no longer in Amphibia, but is told by the Core that it will return.

The flashback concludes and Andrias seems to hesitate when waking Darcy up from her upgrade. However, he does and when she awakens, explains that they are now closer to starting Earth’s invasion and Andrias agress.

Eerily, her voice now resembles his father’s and says “Why son, I’m almost proud of you.”

The end credits roll and we see the painting burning in the fire, with no ending theme, only the crackling of the flames.

This episode of Amphibia is now available on Disney Channel and the DisneyNOW app. You can catch up with previous seasons and the first half of season three on Disney+.