On week two of Keeping Up-, I mean, The Kardashians, we discover that the two minute and forty-three second opening credits were solely for the purpose of the premiere and now, it’s all about the “PREVIOUSLY ON” montage  these days. Those Kardashians, always onto the next trend. Like no time has passed, we find ourselves back in Kim's closet getting ready for Saturday Night Live and protecting herself and her kids. Kim is ready to get every attorney after Ray J’s manager and she has the full support of her family – even if it’s just to pack her looks for SNL. 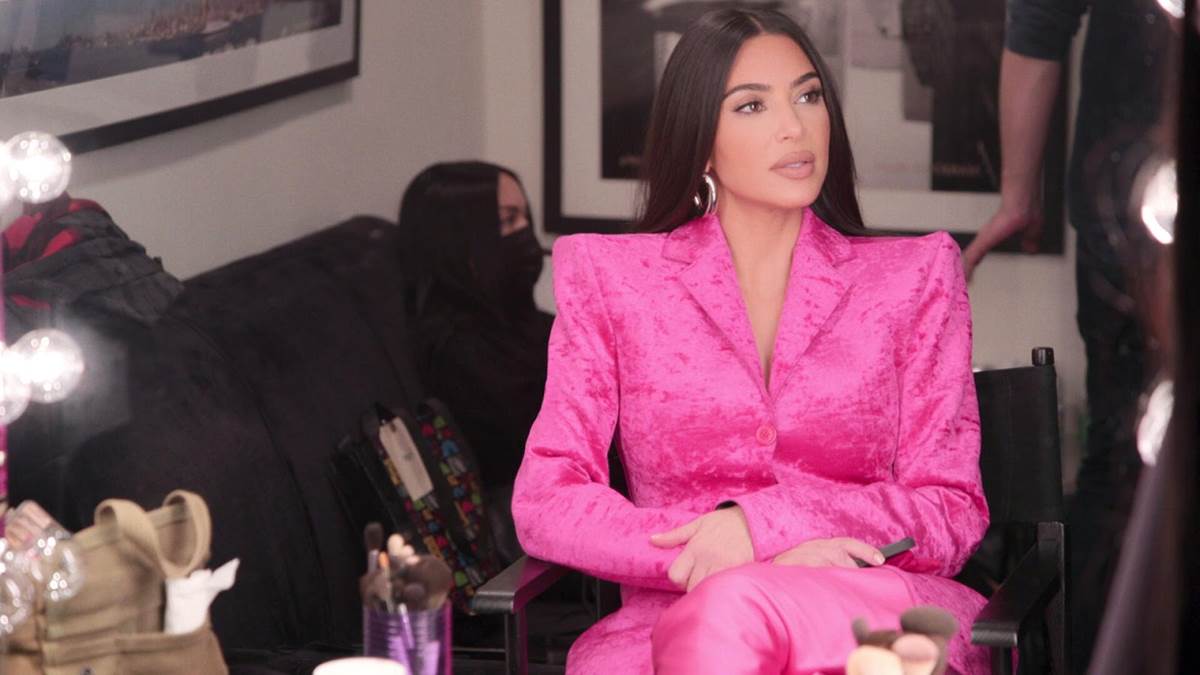 Kourtney and Travis are in Malibu and “exploring the idea of living in one home,” so they’re meeting their real estate agent in Belair. The house has some Old Hollywood elements and they’re setting in pretty comfortably. To camera, Kourtney expresses her gratitude for her kids being able to see a “loving, affectionate, relationship” for the first time in their lives.

Khloe and Malika drive through the hills as Khloe expresses concern about photographers finding so easily. At Kylie’s house, the pair look into the chicken coup for some eggs, but Kylie is nowhere to be found. Khloe catches Malika up on the latest legal pursuits of Kim as well as confides about her nerves for her upcoming TV appearance. She’s going on James Corden and is fearful of potential backlash for anything she might slip up and say. “It’s literally safer to stay at home,” she shares in regards to hiding from internet trolls. Like the great friend that she is, Malika commends Khloe for being able to tune out the haters. At least, Khloe took a beta blocker earlier to calm the nerves.

With only 4 days until SNL, Kim’s in New York and working hard at the machine that is 30 Rock. With calls to her daughter North and her mother Kris, she seems to be in a lighter space and focusing on the daunting television task at hand. Kim says there’s a lot of work that needs to be done for a monologue and she’s going beyond the famed halls of SNL for help. She's meeting Amy Schumer for a pep talk , while Kanye, already in New York, is reaching out to Dave Chappelle and Michelle Wolf all through a (probably hilarious) text exchange. On the way to the James Cordon show, Khloe and Malika recount Khloe’s last appearance where she ate an eyeball in the twisted game called Spill Your Guts. Although that won’t be happening this time around, Khloe remains anxious about the occasion. She’s done with being held under a microscope for the things she posts online and for the things she says. Her frustration is tangible.

In New York, Kim reveals she has 20 days to make her final attempt at the baby bar exam and she’s laser focused. However, even the baby bar has to wait for a visit to Amy Schumer. As the two get settled in Amy’s abode, Kim says Amy is the best at making jokes, to which Amy replies, “You’re the best at taking jokes. How do you do that?”

Together, the pair run through Kim’s monologue drafted on her phone. There’s a joke shared about the only movie Kim’s ever been in; it didn’t have a premiere, and she didn’t know it was released, and her mom had nothing to do with it. Touching on that “movie’s” recent developments, Amy teases her, “Is there a part of you that’s like, let’s get that out, cause it probably is pretty hot?” Kim laughs, and says the joke definitely takes some air out of the controversy. As she continues to read, Amy isn’t holding back her critiques and the pair chug along. 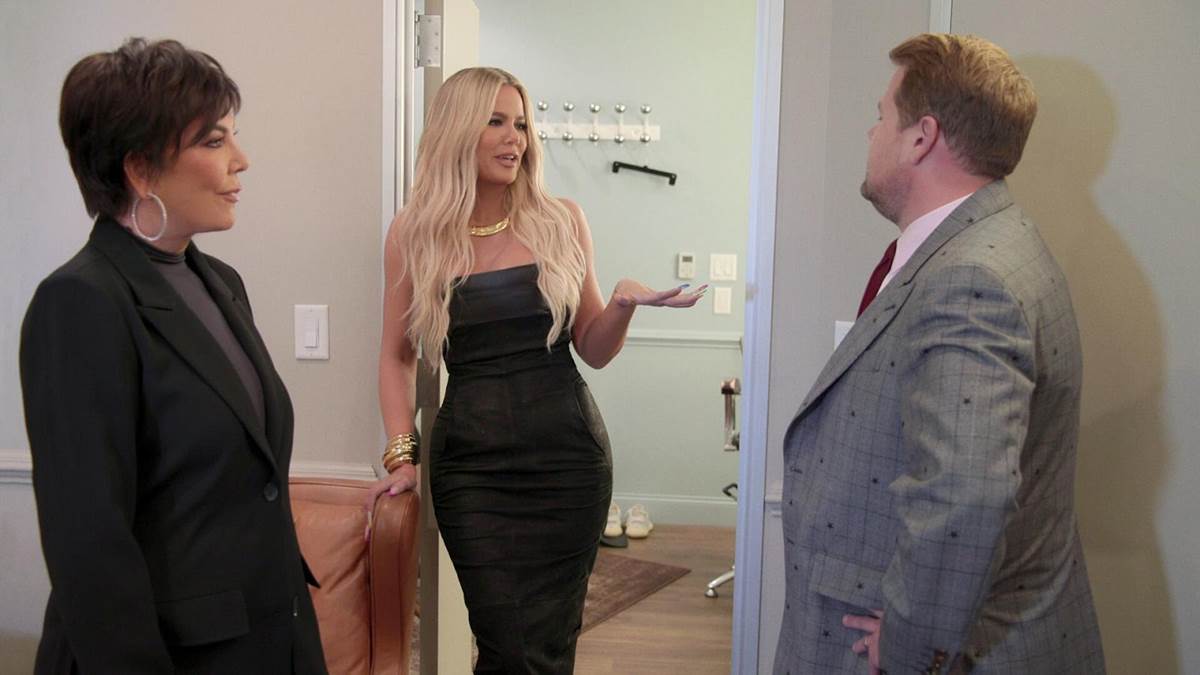 At The Late Late Show, it’s the first show back with a live audience and that makes Khloe even more nervous! But don’t worry, Kris brought those beta blockers again. James Corden enters and while Kris fixes his suit, she mentions Khloe's nerves. “None of these things are about you,” James reminds her about the negative feedback, “These words only exist if I give them any power.”

At Kourtney’s house, Kris walks in and asks how Kourtney’s doctor's visits are going, to which she replies, “Awful.” Kourtney reveals she and Travis are trying to have a baby together and the medication for IVF caused her to go into menopause. She’s feeling off and moody. Kris shares she has felt the despair of trying to have a child, but being unable to get pregnant and encourages Kourtney to think about the potential of one year from now.

Kris and Khloe go rug shopping and Kris shares the craft of rug rolling. Despite Khloe’s worries from the other night, it sounds like her appearance on James Corden went smoothly. Kris reads a funny tweet from her interview, “People are getting high to you!” Despite the playful post, Khloe still feels uneasy. However, Kris reminds her that the overwhelming feedback for Khloe consists of people that are inspired by her and adore her.

Only 3 days remain until SNL and Kim’s donned in her pink apparel for the promo shoot. Kourtney calls and apologizes that she can’t come tape a pre-tape skit when Scott is already invited. Although Kim said she’d disinvite him for her sister, Kourtney says it is completely fine. With her monologue, Kim is going with her gut – and the several other comedians assisting her.

Reminiscing about the days where she struggled to get brands to dress her and had a publicist tell her to “be realistic” when she said her dream was to be on the cover of Cosmopolitan, it’s clear that hosting Saturday Night Live is quite the huge milestone for Kim Kardashian. And her team is just as emotional! Kim’s (brilliant) makeup artist, Mario, sheds some tears about her trajectory. His agency once told him not to work with Kim because it would ruin his career – well, look who’s laughing now!

The rest of the family is on their way, but not so fast because Kris is asking the driver to leave the car. Khloe has a moment of stillness; this has happened before. Who messed up? Who is pregnant? However, it’s Travis Barker on the phone and he’s telling everyone to clear their schedules next weekend. “I’ve been madly in love with Kourtney forever and I believe she’s my soulmate and I would like to propose to her on the date I met her,” he confesses. The tears are flowing from Khloe and Kris who now know the best secret ever.

A new episode of The Kardashians drops every Thursday, only on Hulu.