Goofy has taught us all how to do a lot of things over the past 80 years through classic animated short films produced by Walt Disney Animation Studios. So it makes sense that the same studio is now opening up its proverbial doors to teach you, the fan, how to draw. In the new Disney+ original series Sketchbook, viewers will meet six talented artists, each of whom have chosen a character to draw as they talk about their path to becoming an animator and the wish-fulfillment of arriving at Disney. I was fortunate enough to be welcomed inside the animation studio to meet the artists featured and the creative team behind the series to learn how to make a how-to-draw series. Goofy may not have been there, but the legacy of the studio’s output most definitely was. “We’ve had a deal with Disney for the last three years,” Supper Club co-founder and series executive producer/director Jason Sterman said, explaining that the concept for Sketchbook came about during a conversation with Amy Astley, senior VP of publicity and communications, creative legacy and brand strategy who also serves as an EP on the series. “One of the things that Amy’s obsessed with happens to be one of our other shows that is not for this network called Chef’s Table. And a big part of that really is that it’s that exploration between craft and personal journey stories.” Like Chef’s Table, each episode of Sketchbook is a personal experience for the artists featured.

Over the course of six episodes, viewers will meet some new and familiar faces in Disney Animation. Among the most recognizable is Eric Goldberg, famous for animating Genie in Aladdin, co-directing Pocahontas, providing the animation for Cirque du Soleil’s Drawn to Life at Walt Disney World, and animated Mini Maui, the character’s hand-drawn tattoos, in Moana. “When I was a kid in the 50s, in the early 60s, drawing on camera was a big deal,” Goldberg recalled. “That was a TV show. You know, people who just drew stuff on camera were ubiquitous. We had a children’s television host in Philadelphia named Gene London who used to draw at a big drawing board. That was the show. And before that, Windsor Mackay used to draw live on the stage. That was a vaudeville act. So, I feel like it’s all part of a continuum. But I think the thing that really hit home with me about the series and the core of it is that anybody can draw, and anybody can have fun with drawing. I often think that it’s fascinating that human beings are the only animals who were compelled to make a mark on a piece of paper. There are no other creatures on the planet who do that. And so, it’s natural for everybody.”

Eric Goldberg chose to draw Genie for his episode and similarly, one of his mentees, Hyun-Min Lee, chose to draw a character she helped design and animate, Olaf from Frozen. “I feel like I’ve done my best job when people forget that I exist behind the characters,” the soft-spoken Hyun-Min shared. “It’s also a wonderful way to show that it’s just people behind these things. It’s just the simple pencil line and the pencil stroke and it doesn’t take anything so completely outrageous to have these things come from nothing.” Drawing comes naturally for all of the artists in the series, but being on a set and drawing for a camera was a new experience for Hyun-Min. “I was just kind of giddy the whole time because for me, everyone in the staff and people were making it, they’re like, ‘Wow, look, you’re drawing Olaf.’ And for me it was just like, ‘Wow, look at everything you guys do.’ Because the whole set and the camera work and everything that everyone was doing, that was magic for me to watch. I think for me, I was almost less stressed out about the drawing aspect, but more just excited about everything and just watching what everyone was doing… It was a really magical, joyful experience for me.” “The idea of creating a space where we could bring artists in was important from a production standpoint,” Jason Sterman said about the production design. Animators are brought into an empty studio space, with lights illuminating an open-air office that contains a desk and all of the tools to sketch a character, using the blank walls to project memorable moments of Disney Animation. “What we wanted to try and capture was the old mid-century vibe that is so baked into the DNA of Disney. And so we wanted to create this magical space that felt slightly grounded and it allowed us to enhance what I think we envisioned the setting of the show to be, but for the artists, felt like they had the ability of not being in this very sterile environment, but also not feeling like they’re working at their own desk in the office.”

“It was an eight-hour day in 20 minutes,” legendary animator Mark Henn said of his experience on set being dialed down to a typical-length TV episode. “I think I ended up drawing some six or seven times throughout the course of the day as we were filming. But I think we all have unique stories that in one sense, it’s hard to say we’re proud, but we are. I think there’s a bit of pride in a nice way that is good to share because maybe somebody who watches this is going to have a similar experience or is going through it now.” In his episode, Mark draws young Simba from The Lion King as he relays his own process of trial and error to get a job at the studio. “The idea of a young person having a goal and being told no, or having whatever obstacles put in front of them and then overcoming those obstacles, I think that’s something that is very relatable for an audience. To me, that’s still the unique thing about this series. I think we all have that aspect to our stories, but they’re all different, which I think is really neat. Somebody’s sitting down and asking you a question. I’ve always approached it as just being honest. I don’t have anything to hide. Just telling my story. And that’s very easy.”

Gabby Capili is one of the freshest faces in the series, who confessed to thinking she was being pranked when she received an email invitation to take part in the series. “It just seemed unreal that like, ‘oh, Gabby, you are barely out of the apprenticeship program. Do you want to come in, have this whole documentary filmed about you?’ But it was not even a question. It was one of those things where when I was a kid, I didn’t know what artists looked like. And then the artists that I did know were painters from like the 19th century who were white guys with floppy hair and everything. So, the opportunity to show kids that you can be like anyone and get into animation and have a really good time and a good career doing it was no question. Of course, I’ll do it.” Gabby draws Kuzco from The Emperor’s New Groove in her episode, a character who inspired her to become an animator. While the character she draws is a comical one, she was surprised by the emotions that poured out of her on set. “Jason made me cry at one point and I don’t think it’s in the episode, but I remember being like, ah, he did this, huh? Because I was like, I didn’t think that I was going to be crying today.” 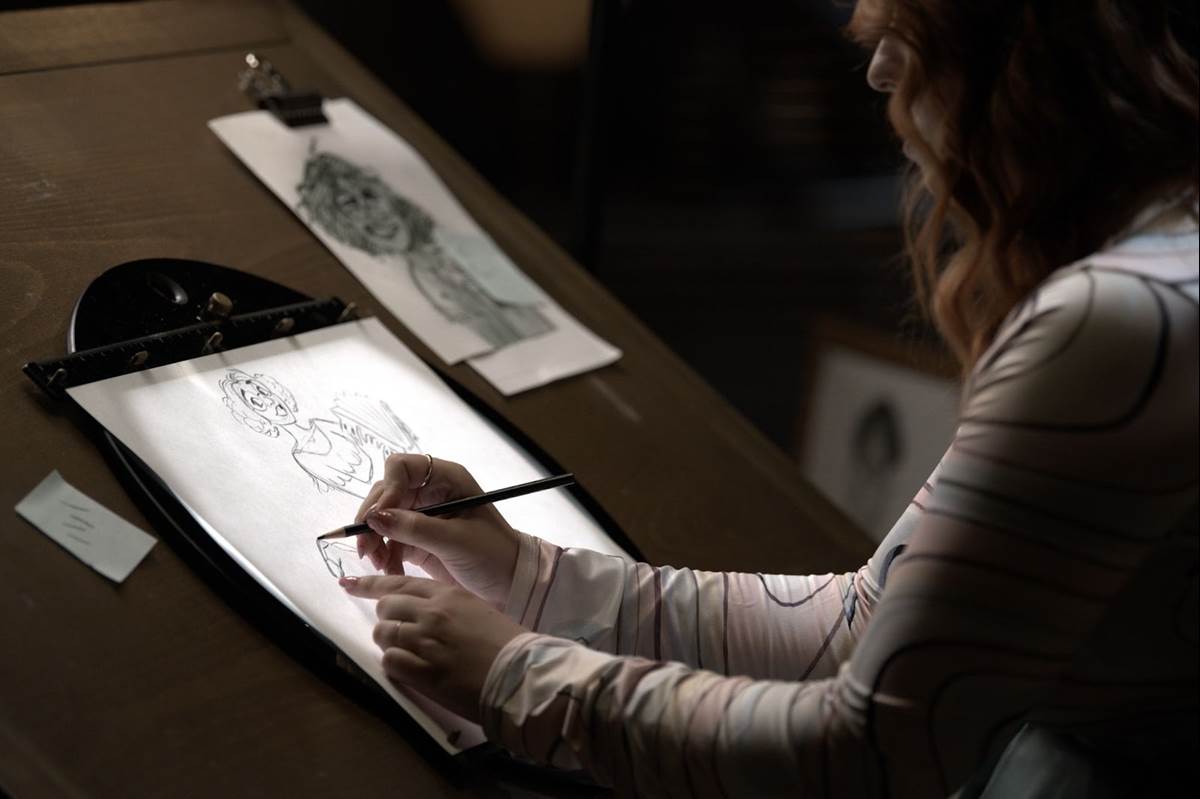 “There are a few reasons I participated in this amazing project: The main one is, ’oh, I can be on TV!’” visual development artist Jin Kim joked, clarifying his real motivation to appear on camera. “This project can be in history, in the future, and then it’s going to be there forever. So my daughters, and my daughters’ daughters and their babies, they can watch, and then they can remember me.” Leaving a legacy while honoring another, Jin Kim chose to draw a classic character that predates his time at the studio, Captain Hook from Peter Pan. “There are many, many characters I designed, or I was a part of the design team and that I know how to draw well. And then there was this Captain Hook character. Actually, with Captain Hook, this character got me here. Because of that character, I became a Disney Animation animator.” Jin Kim recalled that when he applied to work at Walt Disney Animation Studios, they asked him to produce a new piece of animation that wasn’t in his portfolio. His assignment was to animate 5-seconds of footage with Captain Hook, a timeless character that gave the animator anxiety, but he overcame the challenge. “That’s how I got here, so I thank you, Captain Hook. For this show again, I asked my wife which character I should draw, and that’s why I chose Captain Hook. Yeah. That was 22 years ago since I drew Captain Hook last time, so I needed a little more practice to get the muscle memory back. It was fun!”

Captain Hook represents the oldest character featured on Sketchbook, which also includes one of the studio’s most recent, Mirabel from Encanto. When story artist Samantha Vilfort filmed her episode, Encanto had not yet been released, so few people knew the character as well as she did. “I remember being on set and I was saying all these things about Mirabel and the crew is like, ‘I mean, that’s cool but we’ve never met her, we don’t know her’. I was so nervous because we’ve loved her here for a long time, it’s been years of me being with her in an artistic story space, so when the reviews kept coming back and people were like, ‘no, we really love her.’ it’s kind of like sending your kid off to college or something where you’re like, ‘oh my gosh, they’re doing great out there.’” Samantha is used to opening up her personal life in a story meeting to help create these classic films, but doing it for the camera was a new experience.”

Now that you know a little more about each of the six artists featured in Sketchbook and the characters they draw, you might be thinking a very rational thought. The show is about drawing characters, but most of Walt Disney Animation Studios’ output lately has been computer-generated. “We’ve just started a new trainee program for hand-drawn animators here,” Eric Goldberg revealed during the press event. “With that, it means that we have several projects that I can’t talk about, several projects on the boil that involve hand-drawn animation. Also, it never really went away. People like Mark and myself and Randy Haycock, we’ve all been doing and drawing all this time, but all of a sudden, it’s coming back. As a teacher, we noticed that our students want to learn traditional and draw. And that’s really what’s driving so many of them these days. And to actually have the studio put into force a program where we’re actually going to be augmenting that and bringing up a new generation is very, very exciting. Plus, it’s great just to have lots of hand-drawn work in the studio.” 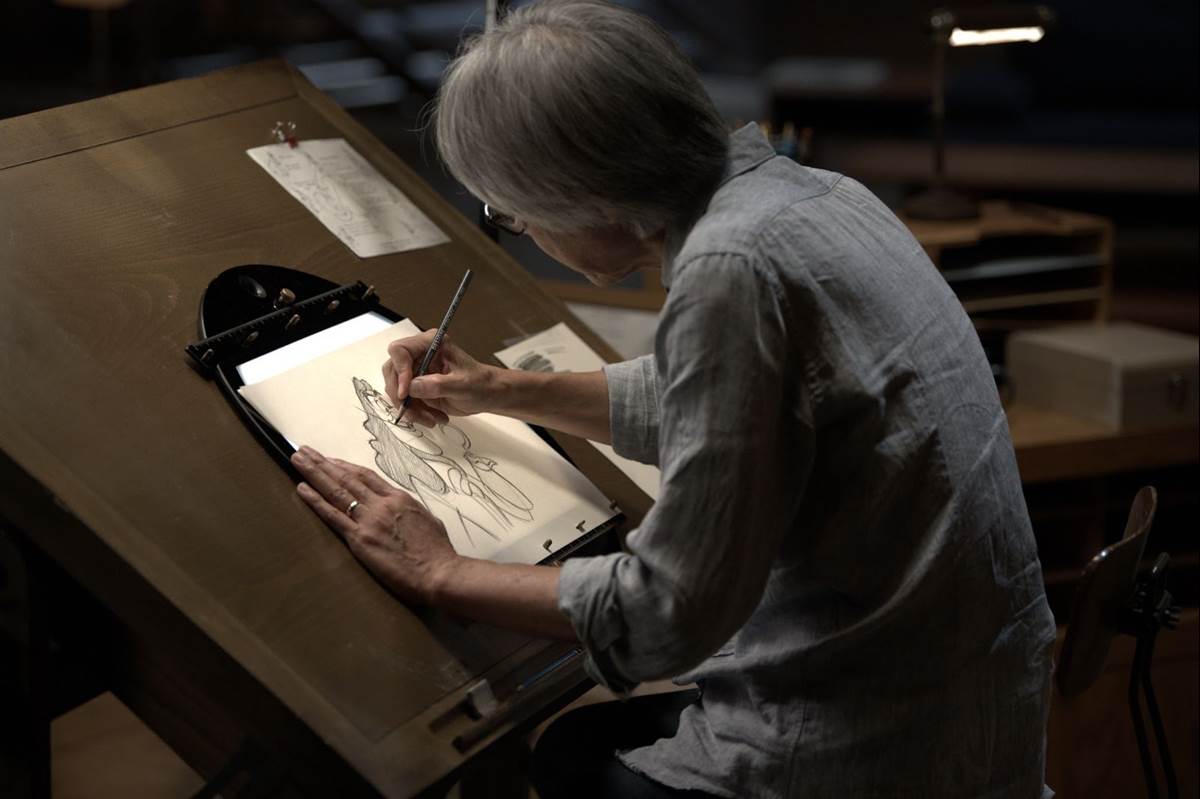 Celebrate the legacy of Walt Disney Animation Studios with the premiere of all six episodes of Sketchbook on Disney+ this Wednesday, April 27th. One hand-drawn project is currently in production for the streaming service, a series that continues the story from The Princess and the Frog called Tiana, coming next year to Disney+.