After last week’s episode of Moon Knight blew fans’ minds, this week took us deeper into the fractured psyche of Marc Spector. With Marc and Steven scrambling for answers in the apparent asylum in which they woke up, things only get more and more crazy as they try to sort out what’s real and what isn’t. 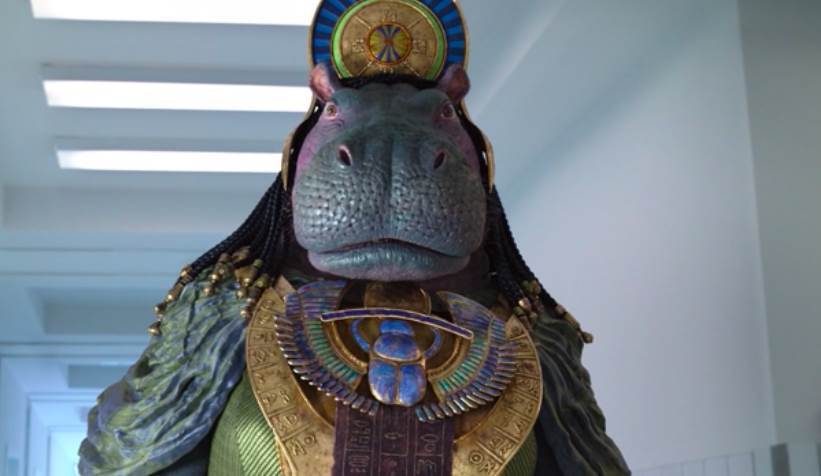 The episode opens with a look at a dark cave filling with water, followed by a woman screaming “this is all your fault,” followed by the screaming of our hippo friend we met last week, while Marc and Steven match her screams and finally just Marc screaming in Dr. Harrow’s office.

Harrow calms Marc down by explaining that everything was in his head and he didn’t shoot him. He appears to win Marc over by helping him to realize that the talking hippo he met is nonsense. However, Marc pick up a sharp object from Harrow’s desk and appears to threaten him before guards rush in and restrain him. They inject him with a sedative and he is instantly transported back to the hall with Steven and the hippo.

The hippo informs both of them that they were actually shot and are now dead. They are now in Duat, the Egyptian underworld. Steven explains that this hippo is Taweret, the goddess of women and children. Taweret explains that this is just an afterlife and mentions that the Ancestral Plane, which we have seen in Black Panther, is beautiful. Marc begins to accept that he is insane and confuses Steven when he refers to Harrow as Dr. Harrow.

He opens a door expecting to walk back into the asylum but is shocked to find a boat, sailing across a desert. Taweret takes Marc’s and Steven’s hearts to weight them on the scales of justice to determine if they will go to the field of reeds or be thrown overboard to be frozen in sand forever.

Marc and Steven step away and Marc proposes they kill Taweret and steal the boat for themselves. Steven objects but before they can argue about it, Taweret calls them over to see that the scales won’t stop moving. She explains that the hearts are incomplete and that they need to go through their memories and show each other the truth.

Alone, back inside, Marc explains that Layla is probably now on a suicide mission to stop Harrow herself, which gives them little time to get back. Marc argues again that they should take the boat or themselves but Steven refuses and begins to look for their memories. He looks through one window to see Moon Knight pounding away on the jackal, which we saw in episode one.

As Steven explores more windows, we see another QR code which will lead you to another free digital comic. This week’s comic is “Moon Knight (1980) #1,” which gives us the character’s origin story. This serves as a little tease as to what’s still to come in this episode.

Marc gets defensive of one particular memory before they both hear a boy crying for help. Steven runs off to investigate and Marc follows. They enter a room where dead bodies sit at two-person tables. Marc begins to investigate them and recognizes them as people he’s killed. Steven spots a little boy and, concerned that Marc killed a child, chases after him.

Steven follows the boy into the memory Marc dodged earlier, locking the door behind him as Marc protests. Steven turns to find his family – his mother, who is the woman we saw screaming earlier, his father and little brother. He also sees the younger version of himself and watches as the two boys run off to play. It begins to rain and the young boy tries to back out of their play but young Marc urges him on. The two boys head into a narrow cave and Steven follows. Realizing the cave is beginning o fill up with water, Steven yells for the boys to leave but he can’t reach them. Meanwhile, back in the halls of the asylum, Marc hears their screams.

He then turns to find a window looking in at a funeral and he enters to find Steven watching it unfold. Marc’s mother appears distraught. As young Marc walks down the stairs, she begins screaming at him and telling him it is all his fault. It appears Marc’s younger brother, who his mother refers to as RoRo, died in that cave but Marc survived. In the comics, Marc does have a brother named Randall, who appears to die but eventually comes back as a villain known as Shadow Knight.

Steven follows young Marc upstairs and into another memory. Marc’s mother refuses to come to the table for his birthday and Marc blows out the candles on his cake with just his father. Steven heads up another flight of stairs to find Marc’s next birthday. This time, his mother is there but she simply continues to blame him for his brother’s death. The boy runs away to his room and Steven follows but before he can get inside, present Marc pulls him back out onto the street.

Steven demands answers from Marc as they see another memory on the street. An older Marc walks away from his father who is pleading for him to come back. Marc blames his father for not fixing the dynamic with his mother and appears to be walking away from his family for good. Marc pulls steven away again and they fall into another memory, this time in the desert.

Steven looks around to see carnage, including a slew of dead bodies that includes Layla’s father. Marc explains that he was discharged from the military and went to work for his old CO, Bushman. This is the first actually name drop of Bushman in the series, though he has been teased previously. Bushman goes on to become Moon Knight’s archenemy in the comics.

Marc continues to explain that Bushman killed these people and tried to kill him. Marc directs Steven to a temple where we find a dying Marc at the foot of a statue of Khonshu. Mirroring his comic origin, Khonshu saves Marc’s life in exchange for him agreeing to become his avatar. 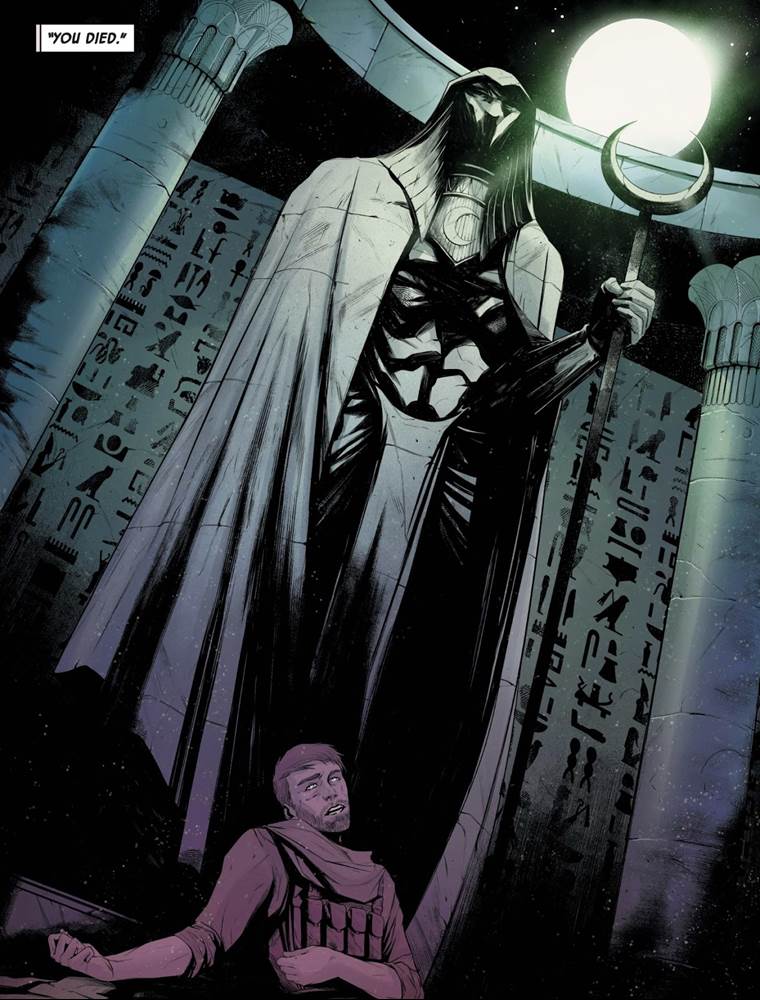 Steven points out that the scales are nearly balanced as they see Marc become Moon Knight for the first time. The two rush back out to the boat to see that souls are flooding the underworld “before their time,” letting them know that Harrow has unleashed Ammit. Taweret agrees to help them get back to stop Harrow but they still need to balance the scales.

Steven tells him they need to go back to the bedroom that Marc hid from him before. Marc tries  to keep them from going back and as Steven argues he begins to freak out until he wakes up back in Dr. Harrow’s office. Harrow continues his treatment, asking Marc if he created Steven or if it was the other way around. He tries to speak with Steven, urging Marc to open up to him.

Suddenly, we’re in the bedroom and Marc and Steven watch as young Marc cowers in the corner. His mother pounds on the door and young Marc becomes young Steven. Steven watches on, learning that he was simply made up by Marc. His mother enters and grabs a belt, ready to beat the young Steven as Marc pulls Steven from the room again.

Steven and Marc argue over the fact that he was made up, with Marc saying he was protecting him from knowing he had a mother who would beat him. Eventually, the argument leads to Marc revealing that their mother is dead, which Steven refuses to accept. In a panic, Steven wakes up in Dr. Harrow’s office. Harrow tries to get answers from Steven but he is not willing to accept this as reality. Harrow mentions his mother’s passing which causes Steven to freak out again. Harrow calls Steven’s mother but when he offers Steven the phone, he admits that his mother is dead.

We then cut to a memory of his mother’s funeral. Marc’s father sees Marc standing on the street form the window. He gestures for him to come inside but Marc refuses and walks away. He breaks down in tears and eventually gives way to Steven, who is confused, not knowing where he is. He immediately calls his mom and begins seemingly talking to her as he starches for answers.

Marc and Steven reunite in this memory and Steven comforts Marc regarding the death of his brother. Suddenly, the ground shakes and they rush back out to the ship, where Taweret informs them that their time is up and the unbalanced souls have come to claim them.

The people Marc has killed climb up onto the ship, now as some sort of sand creatures. They get the better of Marc until Steven comes to his aid. They momentarily get the upper hand before Marc is grabbed again and Steven inadvertently sacrifices himself to save Marc, falling overboard and becoming frozen in the sand.

As Marc yells at Taweret to stop the boat, the scales suddenly balance and Marc finds himself in the field of reeds, the paradise of the afterlife. He looks around to see that he is completely alone and it doesn't appear he has any way of getting back, as the episode comes to a close.

This was a very emotionally-driven episode and it was nice to get inside the fractured mind of Marc Spector. However, this series appears to have run into a problem we have seen with a lot of the Marvel Disney+ series – there are too many questions to answer with just one episode remaining. There series has bee great thus far, but it feels as though it has been set up for a very crowded finale. We’ll have to find out next week.