French Stewart (3rd Rock From the Sun, Inspector Gadget 2, Home Alone 4) is a special guest star on this week’s episode of Raven’s Home, titled “Retreat Yourself.” Premiering on April 22nd, the episode takes place on the weekend, marking the first episode where Booker doesn’t have to go to school since he enrolled at Bayside High School. Here is a recap of “Retreat Yourself.” 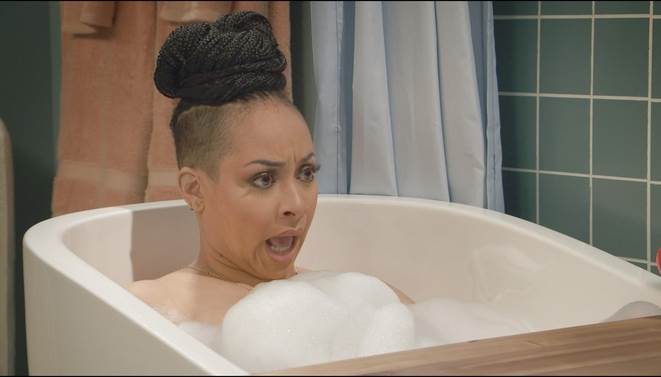 Raven has created the “Baxter Board” to keep track of everyone’s schedules. When Victor enters and sees all of the activities she booked him for on Sunday, he asks her to cancel everything because it’s Alice’s birthday. Booker asks if they’re going to throw her a party and Victor says that Alice doesn’t like to make a big deal of her birthday. Later, Victor changes his mind and decides to take off for a mindful retreat his doctor recommended. He tells Raven that she should do something for herself and stop worrying so much about him, but she has a vision of her dad putting his hand to his chest and yelling “Someone call a doctor, quick!”

Cut to Victor enjoying his retreat in a group meditation class with a guru named Indigo (French Stewart). Raven sneaks in and sits next to Victor, who asks her to leave. Raven responds by saying “Nah, I’m a stay” and the room replies with “Namaste.” Later, when Indigo tries to help Raven up, she accidentally pulls out his clip-on ponytail. When asked to partner up, Raven gets upset that Victor doesn’t want to be her partner and when she tries to tell him about her vision, he tells her that he visions are usually wrong. Indigo tries to break up their quarrel by implementing a two-hour silent reflection period.

Meanwhile, Alice has told Booker that she doesn’t want a birthday party, saying that even if she had one, none of her classmates would come. Booker calls Ivy and Neil to help him plan a surprise party, with Neal taking Ivy out for ice cream while Booker and Ivy decorate. The doorbell rings and Alice’s classmates arrive, but when Alice comes in, none of them follow Ivy’s instructions to yell “Surprise.” The students were all misled into coming and Alice tells Booker that her classmates are competitive geniuses who don’t like to party and that their decision to not go to her party wouldn’t have been personal.

Booker tries to make Alice’s party fun with a magic show, but the kids know how all of the tricks are performed. Ivy is the next to try and save the party with balloon animals, taking requests to make specific molecular models. But when the kids start to do homework instead of watch her make balloon animals, Booker gets an idea to give the kids an assignment that will also be fun.

Raven and Victor silently fight with their eyes and hand gestures, with Raven getting so flustered that she gets up to open a window in the stuffy meditation room. Doing so releases all of Indigo’s butterflies and he snaps, kicking Raven and Victor out of the retreat. He’s so upset that he collapses, prompting Victor to say “Someone call a doctor, quick!” Raven realizes what her vision meant and when her dad asks her to leave, she does. But Raven accidentally leaves through the wrong door, entering a steam room and getting locked inside. After accidentally turning on the steam effect, Raven hallucinates that her reflection is talking to her. The mirror Raven tells her that she’s wasting her life by spending all her time caring for others. Raven’s reflection asks her what she wants and she says she doesn’t know. Raven’s conversation with herself is interrupted when Victor opens the door to find her.

Back at the house, Booker has convinced Alice’s classmates to build a “linear gravitational accelerator,” better known as a slide. Encouraging them all to test it, they all have fun and Alice tells Booker it’s been her best birthday party ever. Raven and Victor arrive home and before entering, Raven apologizes for being overly controlling, promising her dad that she will focus more on herself from now on. They open the door to a big mess in the living room from the party. Victor asks Raven for her help, but she says “Sorry, dad, I’m focusing on me.”

In the final scene, Raven takes a relaxing bath at home, but is interrupted by her mirrored self. When the other Raven refuses to leave, the real Raven pulls the plug and her mirror self cries “Oh snap!” as she gets washed down the drain.

Raven’s Home returns on Friday, April 29th with “New Kid on the Chopping Block.” Here’s a description of the next episode:

Booker tries to one-up a new kid at school, while Raven aims to bring back the arts program at Bayside High.