The 1970s punk rock esthetic that made Disney’s Cruella such a big hit can trace its roots back to the Sex Pistols, a legendary punk rock band that had a huge impact on pop culture over a shortperiod of time. FX explores the band's rise and fall through a six-part limited series streaming exclusively on Hulu on May 31st. Based on Steve Jones’ memoir, Pistol approaches the band’s history with a reverence for the irreverent. 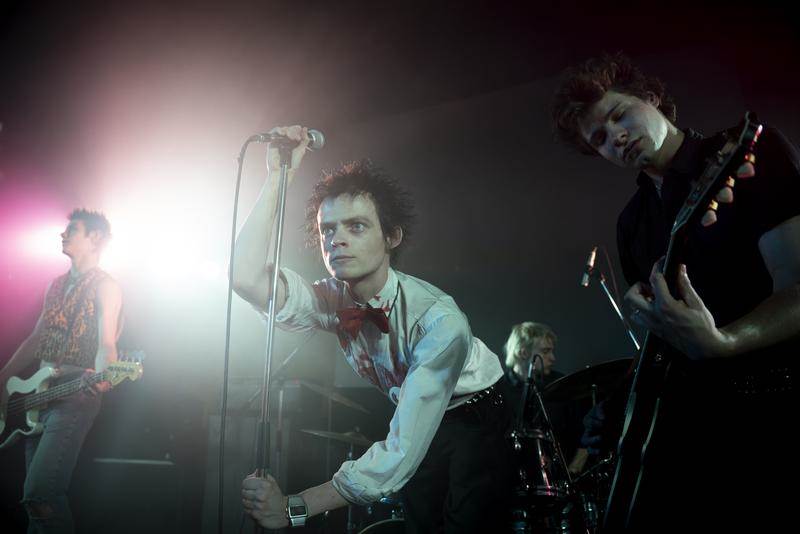 Centered around Steve Jones (Toby Wallace), the early years of the Sex Pistol reveal the guitarist’s tumultuous past as he leads a movement that upends polite society. From rock music to fashion and language, the series recounts the origins of punk rock and the band at the center of it. In addition to the core band members (Johnny Rotten played by Anson Boon, Sid Vicious played by Louis Partridge, Paul Cook played by Jacob Slater, Glen Matlock played by Christian Lees), the series also showcases the strong women that helped the band achieve great success, including Chrissie Hynde (Sydney Chandler), Vivienne Westwood (Talulah Riley), Pamela Rooke, aka Jordan (Maisie Williams), and Nancy Spungen (Emma Appleton).

If you didn’t know that Pistol was a 2022 release, you might assume it’s an archival documentary. Splicing together archival footage and settling on a vintage-looking production design, shots of David Bowie on stage performing “Moonage Daydream” seamlessly flow into actor Toby Wallace sneaking on stage after the set to steal equipment. The effect is convincing, creating a blur between what’s real and what’s acted for this production. The series also leans into the era with a 4:3 aspect ratio, as if this was all made for a television audience in the late 70s.

Oscar-winning director Danny Boyle (Slumdog Millionaire) leads the production with a clear vision that translates well to the screen. Adapted by Craig Pearce (Moulin Rouge!), Pistol balances iconic musical moments with the grit and drama of the story behind the songs. Fashion plays a pivotal role in the series, as you would expect with a character like Vivienne Westwood among the ensemble. Many shots feel like a time capsule of 1970s style paired with distinctly London scenery.

While no prior knowledge of the Sex Pistols is necessary to appreciate and enjoy Pistol, it probably helps. Having not much prior knowledge, I felt like the story made assumptions, particularly in the first episode, about what the audience should already know. It’s clear that there was an effort made to not patronize a built-in audience, but it comes at the cost of somewhat alienating newcomers. However, There’s an exciting story to be told set amongst the backdrop of 1970s London at the dawn of a movement. In this 6-part miniseries, the filmmakers are able to deliver the story with the justice it deserves.

I give Pistol 4 out of 5 conversations about David Bowie’s lipstick.

Pistol premieres on May 31st exclusively on Hulu.