Guardians of the Galaxy: Cosmic Rewind will be opening soon at EPCOT in Walt Disney World. We were lucky enough to get a preview of the exciting new attraction and noticed that (surprise!) the Wonders of Xandar pavilion is loaded with Xandarian text all throughout.

There are multiple signs throughout the pavilion with these weird symbols that will make no sense to most guests. However, the Xandarian alphabet can be translated to find some fun messages. 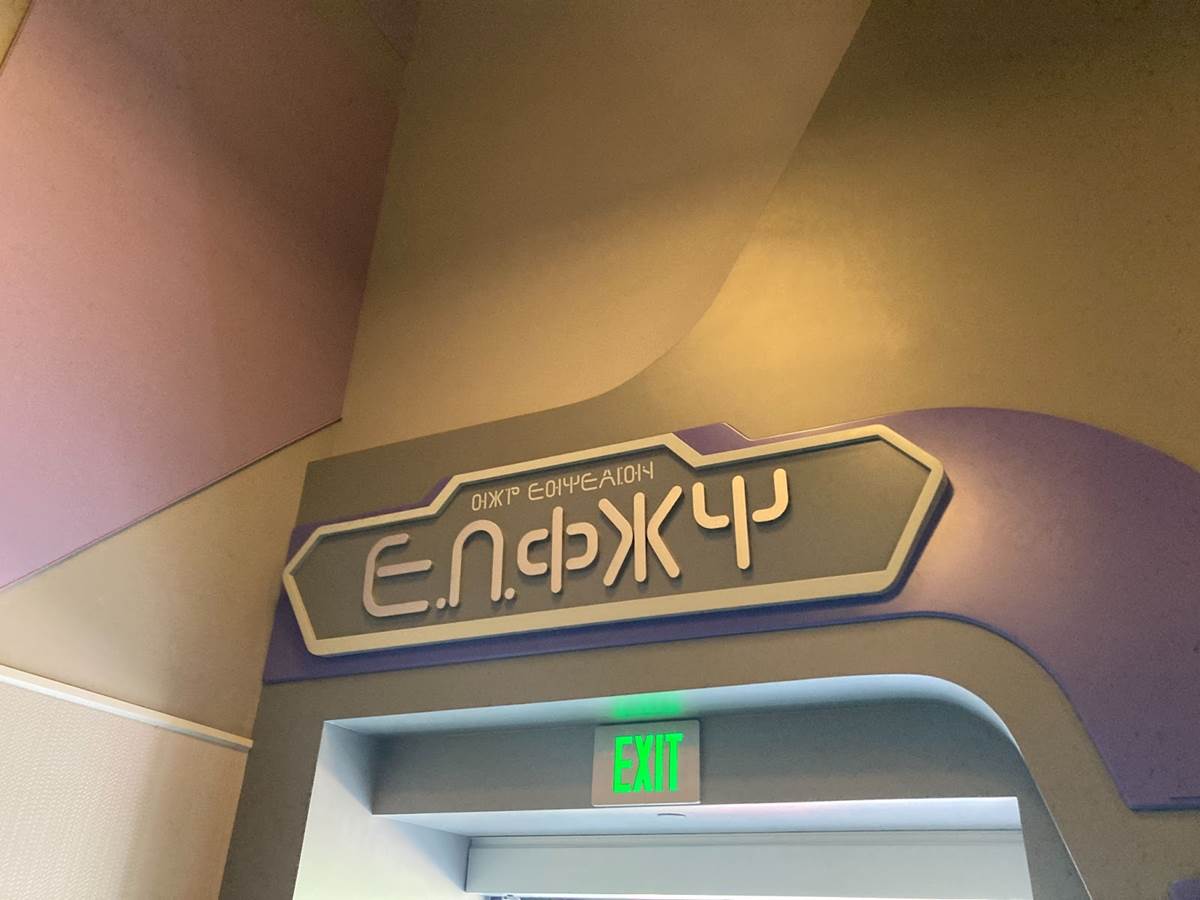 For example, this sign at the exit of the attraction translates to “NOW ENTERING EPCOT.”

That was actually our starting point for translating Xandardian as we were pretty confident that last word would be EPCOT. However, the rest of the language wasn’t truly unlocked until we learned that the alphabet could be found all in one spot in the queue. That is, the entire alphabet except for one character.

After the pre-show and before the load platform, guests will find a large sign with a diagram of the Xandarian ship which they are trying to evacuate. In the upper right of this sign, you can spot most of the Xandarian alphabet in order. 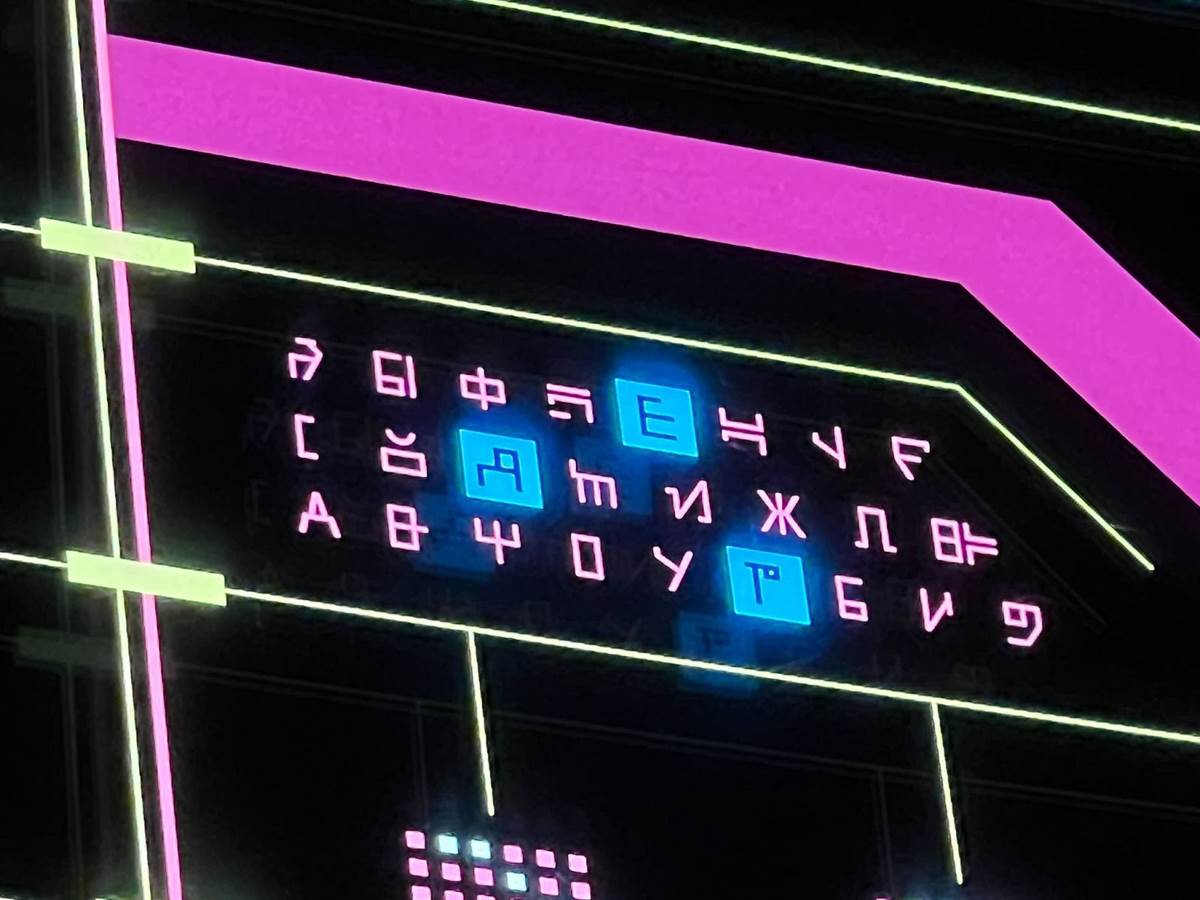 Now, you may notice there are only 25 characters in that chart. While this helps the translation process a lot, it still leaves us with the problem of that missing character.

While we were enjoying the preview of this incredible new attraction, we had the pleasure of speaking with several Walt Disney Imagineers about the creation of the whole experience. We were given the tip of starting at the beginning and the end and meeting in the middle to find the missing character. That left us with the idea that either ‘M’ or ‘N’ was the missing character.

Looking back at that sign from the attraction’s exit, I noticed that top line started with a character that wasn’t included in the alphabet in this chart. I also noticed that character was featured a couple of other times in that same line. After some trial and error and a whole lot of flipping between photos, I was left with “-OW E-TERI-G EPCOT.” Feeling pretty confident that the top line didn’t say “MOW EMTERIMG,” I had unlocked the Xandarian alphabet and quickly got to work on other signs. 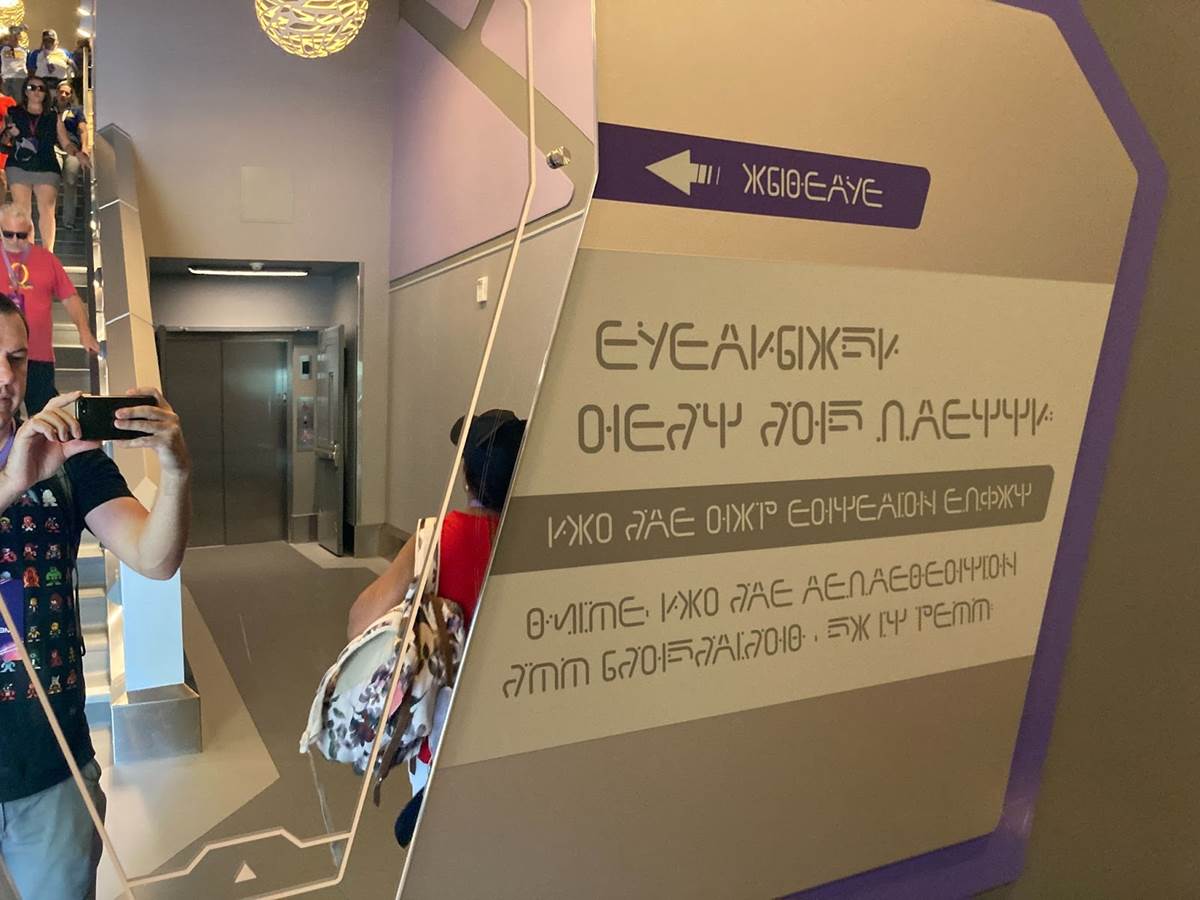 Also at the exit, and serving as an Easter Egg that Disney Cast Members are sure to love, this mirror features a long Xandarian message that translates to:

“OBSERVE. EVERYBODY NEAT AND PRETTY. YOU ARE NOW ENTERING EPCOT. SMILE, YOU ARE REPRESENTING ALL XANDARIANS. DO IT WELL.” 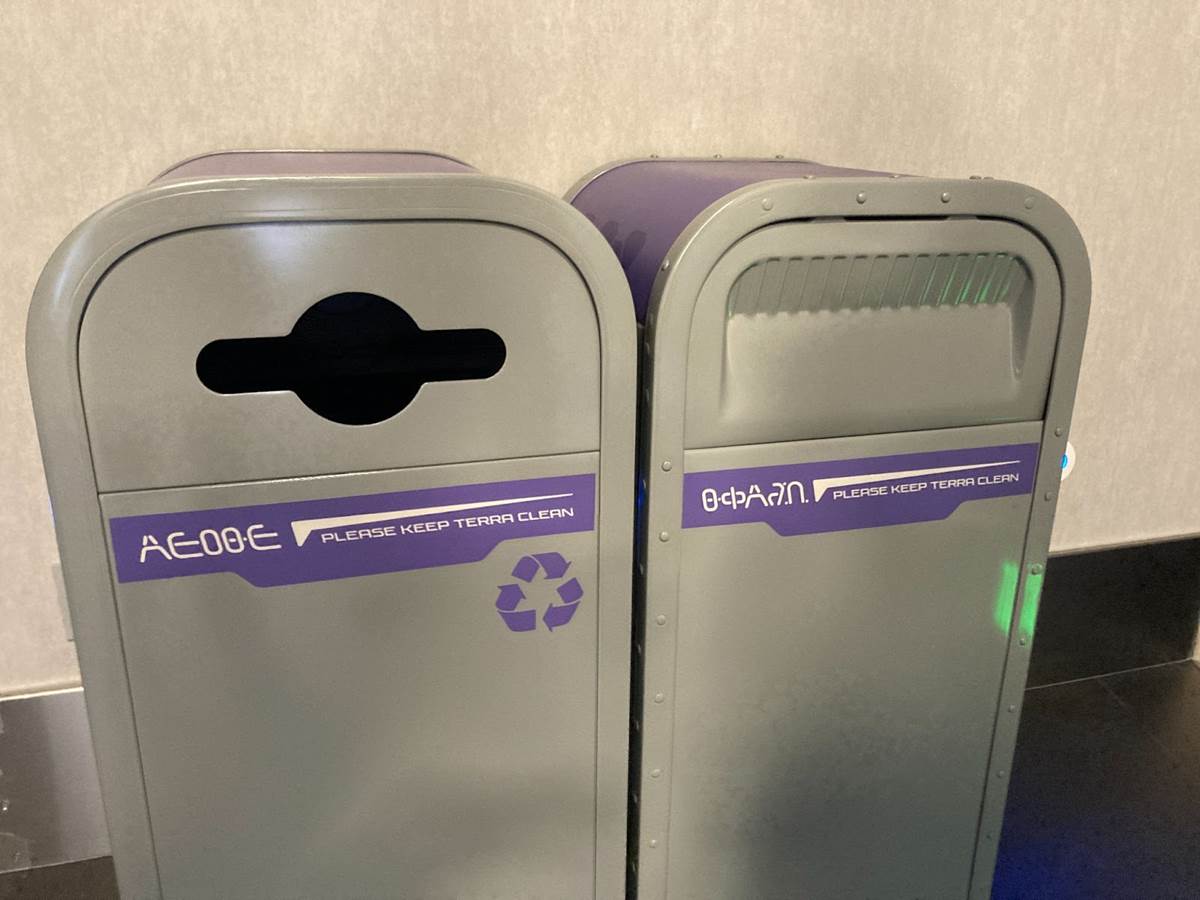 The trashcans throughout the queue simply translate to “REUSE” for the recycling and “SCRAP” for the trash. Before entering the load platform, guests will find this sign that reads “LOADING,” “AIRLOCK” and “EVAC D.” Below that, it reads “MANUAL RESET CODES” followed by five lines of text that don’t actually mean anything. Unless someone can crack some kind of deeper code that might be hidden here. Check out the first line:

As for the sign with the alphabet on it, a whole lot more text can be found. Beneath these representation of the various symbols of EPCOT, we find text that reads:

The Starjumper is the name of the ride vehicle, on which the guests are being evacuated from the Xandarian ship. 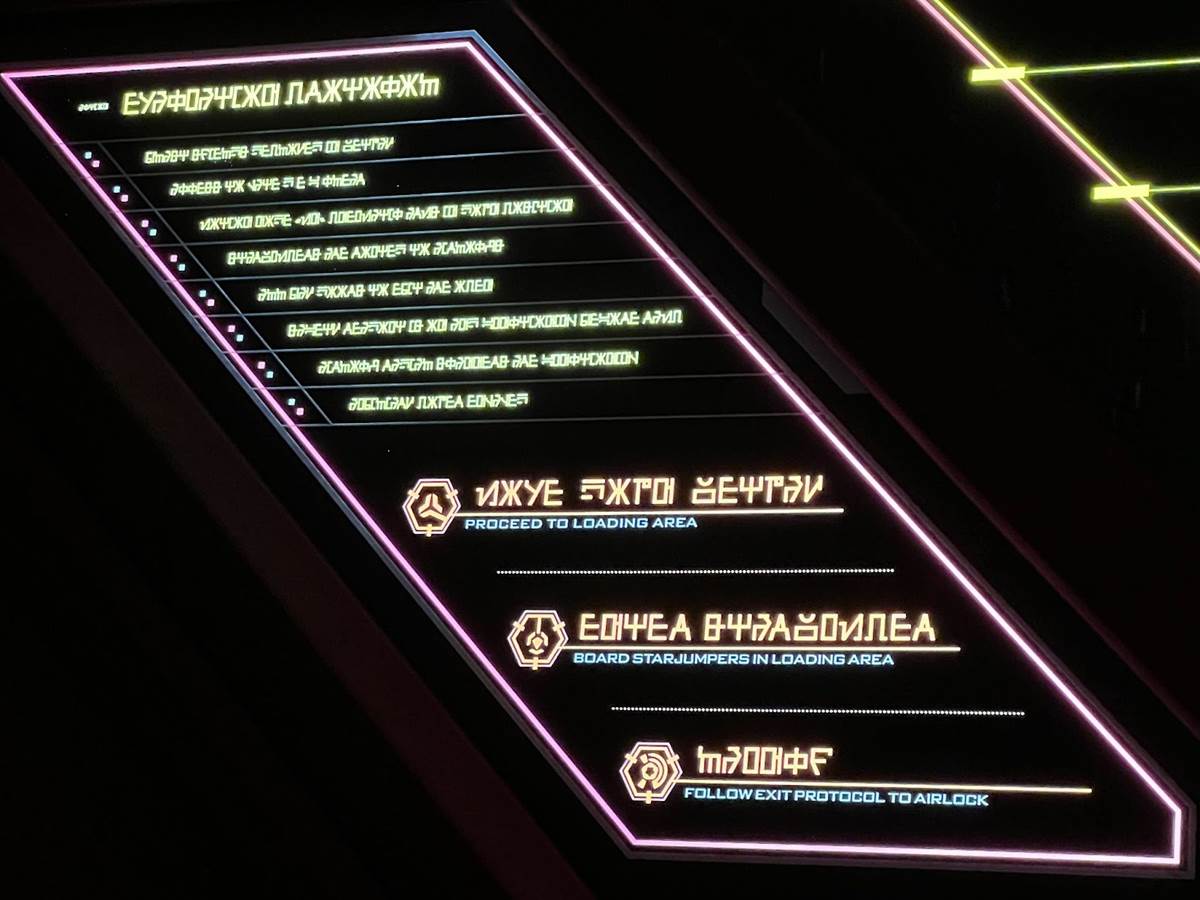 On the left sign of the sign, this menu can be found. The first few lines of green text read:

And the larger orange text reads: The above image reads:

The text in the green boxes reads: 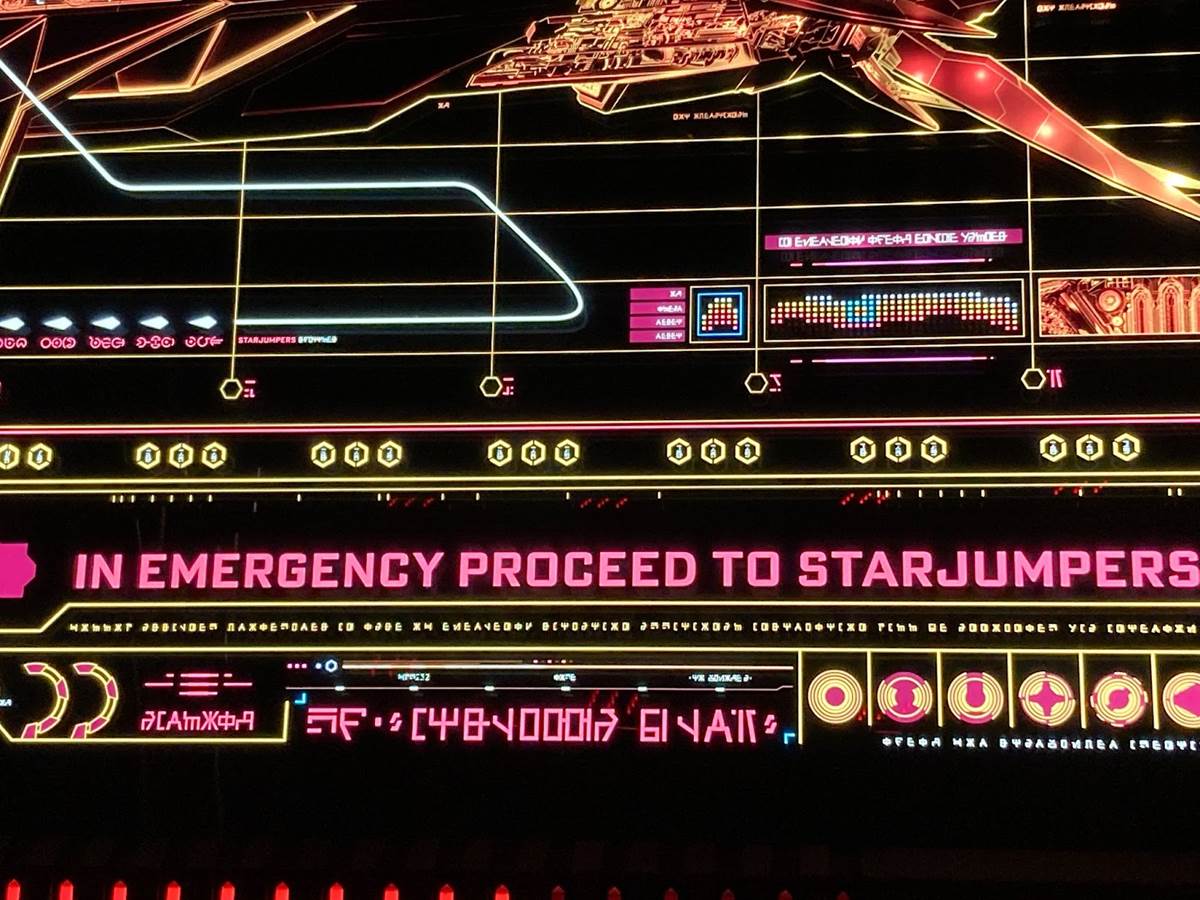 And finally, the middle portion of this sign features a whole lot of text. Some of it is to small to really make out what some of it says, but I can see the words “EMERGENCY CHECK” and “RESET” in the upper portion of the image above.

The long line of yellow text translates to:

“FOLLOW ASSIGNED PROCEDURES IN CASE OF EMERGENCY SITUATION ADDITIONAL INSTRUCTION WILL BE ANNOUNCED VIA INTERCOM.”

Interestingly, the pink text at the bottom doesn’t really translate. After the word “AIRLOCK,” the bottom line reads:

“DH ITS GUNNA B GR” followed by a symbol that doesn’t appear to be a part of the alphabet.

The only thing I can decipher from this line is “GUNN” portion possibly pointing to Guardians writer and director James Gunn.

There is a whole lot of Xandarian to be found all around the Wonders of Xandar pavilion, so there’s a good chance I missed some. If you spot any more, try and translate the alien language to see if you uncover some kind of great Xandarian or… EPCOTian secret.