Booker finds that attending his mom’s old high school isn’t as fun as he thought it would be in “Mr. Petracelli’s Revenge,” the ninth episode of Season 5 of Raven’s Home. The title, however, is a little misleading as it’s not the original Mr. Petracelli, played by Ernie Sabella on That’s So Raven, but the character’s son, played by Fred Stoller. Here’s a recap of the latest episode of the Disney Channel sitcom. 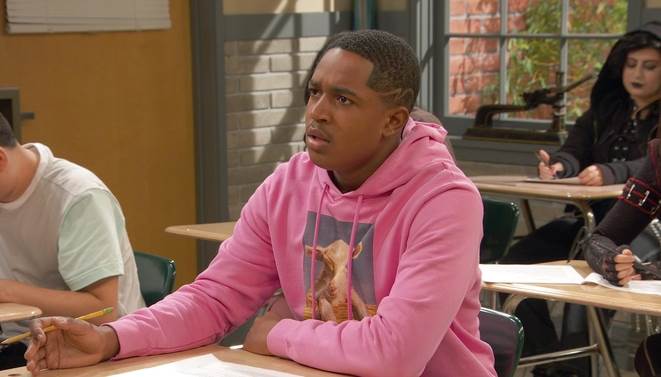 While taking out the trash, Booker finds Victor in the garage dusting off an old VHS containing copies of past commercials for The Chill Grill, which he plans on showing to the director of the restaurant’s new commercial. Booker asks his grandpa about the car under the tarp and Victor shows him a red classic car named Jeanine. Booker tells his grandpa that he has his driver’s license and asks if he can drive it. After being told no, he has a vision of Victor saying “I didn’t think you could get straight A’s. Jeanine is yours.” Booker asks Victor if he could drive the car if he gets straight A’s and Victor agrees.

Raven discovers that her folder of designs got mixed up with Booker’s history folder so she takes it to his school to swap them out. While there, she reminisces about how horrible her history teacher was, Mr. Petracelli, describing him as loud, sweaty, and always cracking his neck. The sound of a neck cracking gives Raven the willies as she turns around to meet Mr. Petracelli’s son, who is Booker’s history teacher. He instantly realizes that Booker is related to the Raven Baxter in his father’s memoirs, which contained stories about his father’s least favorite student. Raven accuses him of being just as pathetic as his father and after she leaves, he begins to take out his father’s frustrations on Booker.

Victor brings Alice to The Chill Grill so she can watch him film the new commercial. Nori, the director, is so concerned with being trendy that she has given Victor a script that he doesn’t understand. After a few bad takes, Alice says the lines the way he should and Nori falls in love with her, making Alice the star of the commercial and kicking Victor off the screen. Victor says The Chill Grill is a family restaurant and he’s been in every commercial since the day they opened, but Nori isn’t interested in compromising her vision for the ad.

Booker tries to make things right with Mr. Petracelli by bringing him an apple, which he hates. Noticing his teacher was sweaty, he turns on the fan and accidentally blows his toupee off. Mr. Petracelli tells the class that tomorrow’s midterm exam is worth 50% of the grade, so Victor needs an A in order to get straight A’s.

That night, Booker starts studying for the midterm and Raven finds out what happened in class. She wants to get involved to help Booker, but he asks her to let him prove Mr. Petracelli wrong by getting a good grade. When he finishes studying, Raven keeps him up by giving him more books to study and random pop quizzes. He doesn’t get a good night’s sleep as a result.

The next day at school, Mr. Petracelli passes out the midterms and Booker can’t stop yawning. He has hallucinations of Mr. Petracelli mocking him as various historical figures. We next see Booker arriving home from school and Raven asks him how the test went. Booker says it went fine, but Raven doesn’t believe him. Victor comes in from the garage with a box of old stuff he wants to get rid of, saying nobody wants old stuff anymore. Booker sees some of the old clothes Victor is getting rid of and gets an idea.

Raven pays Mr. Petracelli a visit that night and tells him that her son shouldn’t be punished for what happened between her and the teacher’s father. Mr. Petracelli reveals that Booker didn’t complete the test because he left in the middle of class, calling Booker a troublemaker. They’re interrupted when the door opens and Booker, dressed in Victor’s old clothes and wearing makeup to appear older, enters the classroom and pretends to be his grandfather. He doesn’t see Raven as he asks Mr. Petracelli to give his grandson another chance on the test. When Raven reveals herself, Booker says “Oh, snap!”, but Raven doesn’t sell out her son. After all, she did the exact same thing in the That’s So Raven episode “Mother Dearest” with the original Mr. Petracelli. Booker accidentally lets his own identity slip, but Mr. Petracelli gives him a make-up exam anyway, saying that it’s not fair to hold a grudge against him for the history his father had with Raven.

Nori isn’t interested in letting Victor back in the commercial, but when Alice realizes that she has stolen the show from her grandfather, she refuses to do any more until Victor is allowed to share the screen with her. Nori gets mad and quits, leaving Victor to direct his own commercial.

When the grades come back from the midterms, Booker gets an A and celebrates that he will get to drive his grandfather’s car. When he gets home, Raven is upset with Victor for letting Bookjer have Jeanine as Booker’s vision comes true. However, Victor tells Raven not to worry as they watch Booker climb inside. The car won’t start and Victor reveals that Jeanine doesn’t have an engine. Raven laughs hard. The episode ends with the commercial that Victor and Alice made.

Raven’s Home will return on May 13th with an episode titled “Date Expectations.”

Desperate to take Cami to a dance, Booker convinces Ivy to throw a party at the Chill Grill. But Cami’s plans get in the way of Ivy having a successful party.