Coming off of a spectacular pay-per-view event, the UFC will be returning to the APEX in Las Vegas this weekend for another thrilling night of fights. Some of the best fighters in the world will come to the fight capital of the world and look to pick up some big victories.

A former light heavyweight champion will look to regain glory in the main event against another top contender in a division that is very much there for the taking. Plus, two more light heavyweights will clash as they look to clime the rankings while two bantamweights will try to cack the top 15 in a stacked division.

Two exciting bantamweights will look to rebound from recent losses in this one. Grant is actually coming off of back-to-back decision losses, which snapped a three-fight winning streak. He now sports a 13-6 record with eight submission victories. However, none of those submissions came in the UFC and he has been more likely to knock his opponent out in the octagon, showing some serious power in his hands. Strategies will be interesting here but Grant is likely going to want to keep this fight on the feet.

Smolka has alternated wins and losses for his past six fights and is now coming off of a knockout loss his last time out. Still, he comes in with a 17-8 record, with eight wins by knockout and seven by submission. He has shown very strong striking and grappling skills in the past but for whatever reason he just hasn’t been able to put it all together for more than a few fights in a row. He can obviously stand with Grant but his advantage may be on the ground in this matchup..

The light heavyweight division is interesting right now as there is talent up and down the rankings, but it is one of the few classes in which no dominant champion has emerged in some time. So just being in the rankings, as Spann is, creates a huge opportunity to move up. Spann is 19-7 with 11 submission wins. Recently though, he has lost two of his last three, with both of those losses coming by knockout. This is probably a must-win for Spann here if he wants to keep that number next to his name and score a big opportunity to jump up his next time out.

Cutelaba currently finds himself outside of the division’s top 15, though a win over Spann could easily see these two guys switch places. Cutelaba is coming off of a decision win over Devin Clark and could really build some momentum here. He brings in a 16-6 record with 12 wins by way of knockout, so clearly he knows how to put his opponent away. Spann is likely going to look to take this fight to the ground and it will be important for Cutelaba to not allow that to happen. 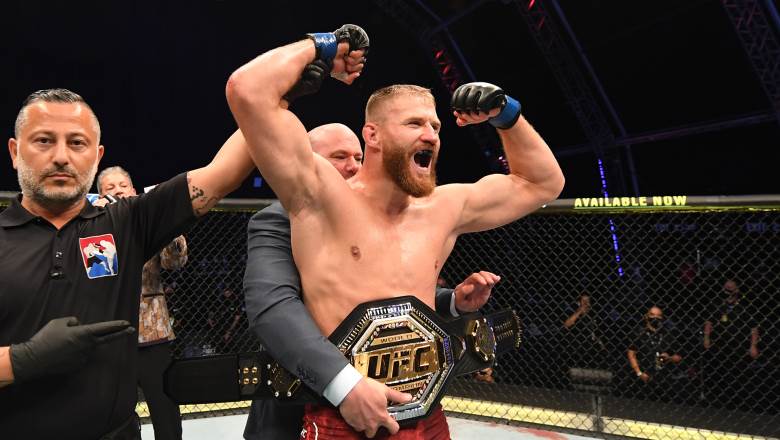 Like I’ve said, the light heavyweight division is wide open right now. It’s rare to see a fighter go from defending his championship in the main event of a pay-per-view to fighting on a free card, but that is exactly the case her for Blachowicz. And believe it or not, he’s the underdog here.

Blachowicz is coming off of his championship loss to Glover Teixeira back in October. Before that though, he had won five in a row, including a super fight against dominant middleweight champ and otherwise undefeated Israel Adesanya. With a 28-9 record, Blachowicz is not only very experienced but he has proven he belongs in the octagon with the best in the world. And with eight knockouts and nine submissions, he has also proven that he can put guys away.

But the former champ is an underdog for good reason. The third-ranked Rakic is nine years younger and coming off of back-to-back wins over top contenders Thiago Santos and Anthony Smith. Rakic boasts a 14-2 record with nine knockouts, two of which have come in his young UFC career. He’s a very dangerous striker and if he can keep Blachowicz at range and not allow this to become a grappling match, this is his fight to win and possibly his title shot to claim.

UFC Fight Night: Blachowicz vs. Rakic will be held Saturday, May 14 at 10 PM ET. Fight fans can watch live on ESPN+.