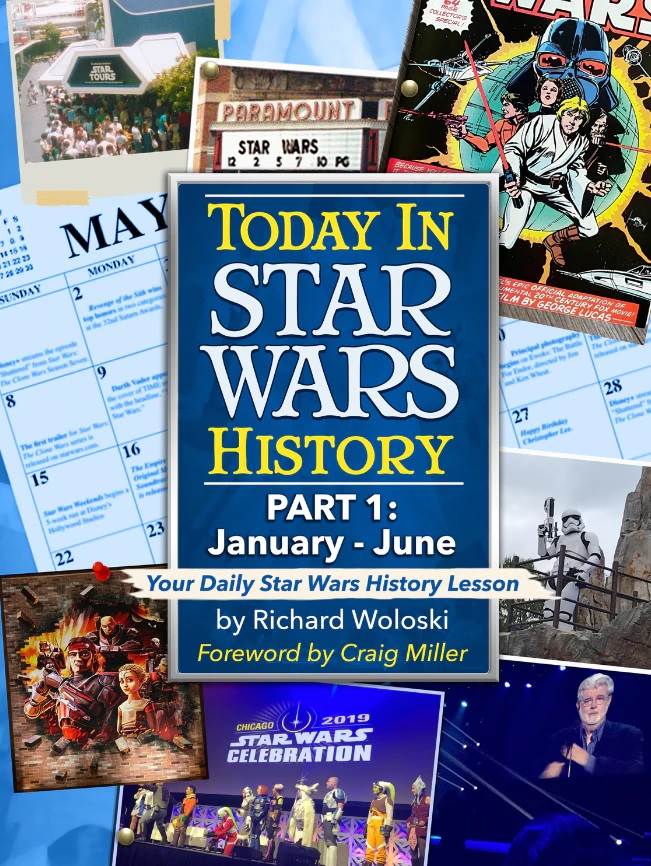 “What happened on your birthday in Star Wars history” That’s the question posed on the back cover of the upcoming new reference book Today in Star Wars History – Part 1 January – June by first-time author Richard Woloski, co-host of the “Skywalking Through Neverland” podcast.

It’s a similar premise to the officially licensed Star Wars: Year By Year – A Visual History, which came out in 2021 from publisher DK, but Today in Star Wars History takes a different organizational approach (by date instead of chronologically, if that description makes sense) and a much deeper dive into the minutiae of Star Wars-related releases, momentous occasions, and birthdays of cast and crew members. 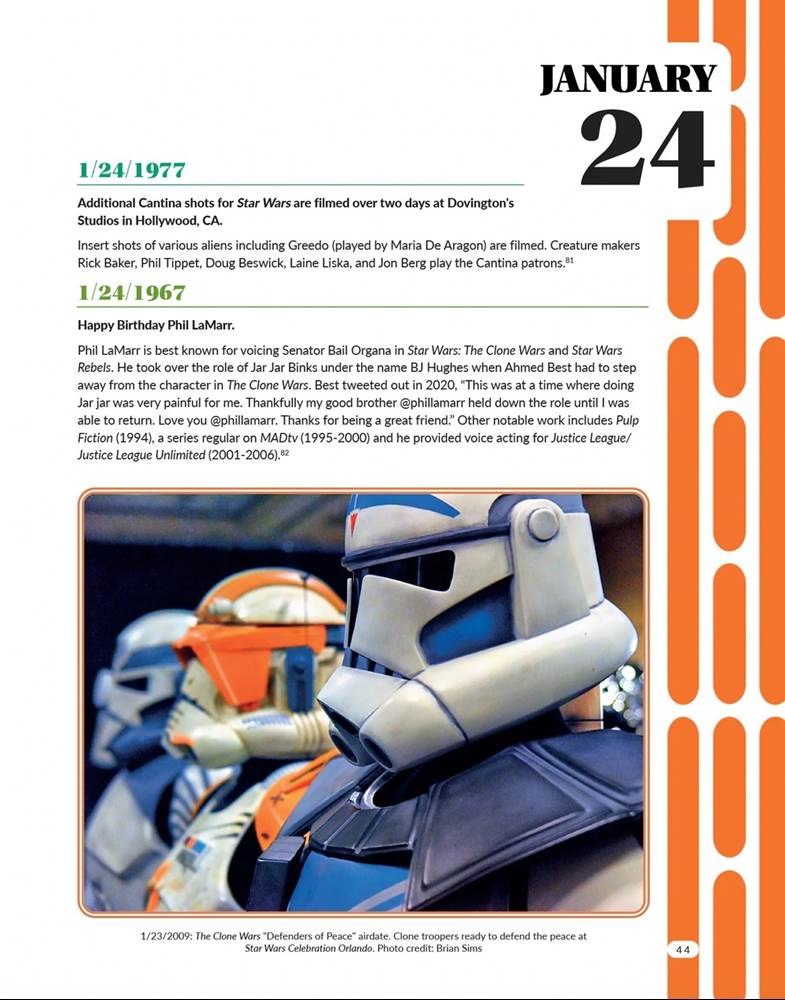 And speaking of birthdays, I can honestly say that I had no idea when concept artist and Lucasfilm Executive Creative Director Doug Chiang was born until I randomly flipped to a page in Today In Star Wars History when Richard handed me my copy of the book. Yes, for the sake of full disclosure, I know Rich and his wife / “Skywalking Through Neverland” co-host Sarah personally, but I won’t let that affect my review unless they slip me a few extra credits (you guys know where to find me). All kidding aside, I paid for this book because I wanted to support my buddies in the Star Wars community, but I found myself entranced by the sheer volume of Star Wars knowledge on display here. I mean I bet Rich did some research along the way, but according to the “About the Author” section on the final page, he was among those who saw Star Wars (years before it was called Episode IV – A New Hope) numerous times in the theater during its 1977-78 release, so I’m pretty sure he knows his stuff, too. 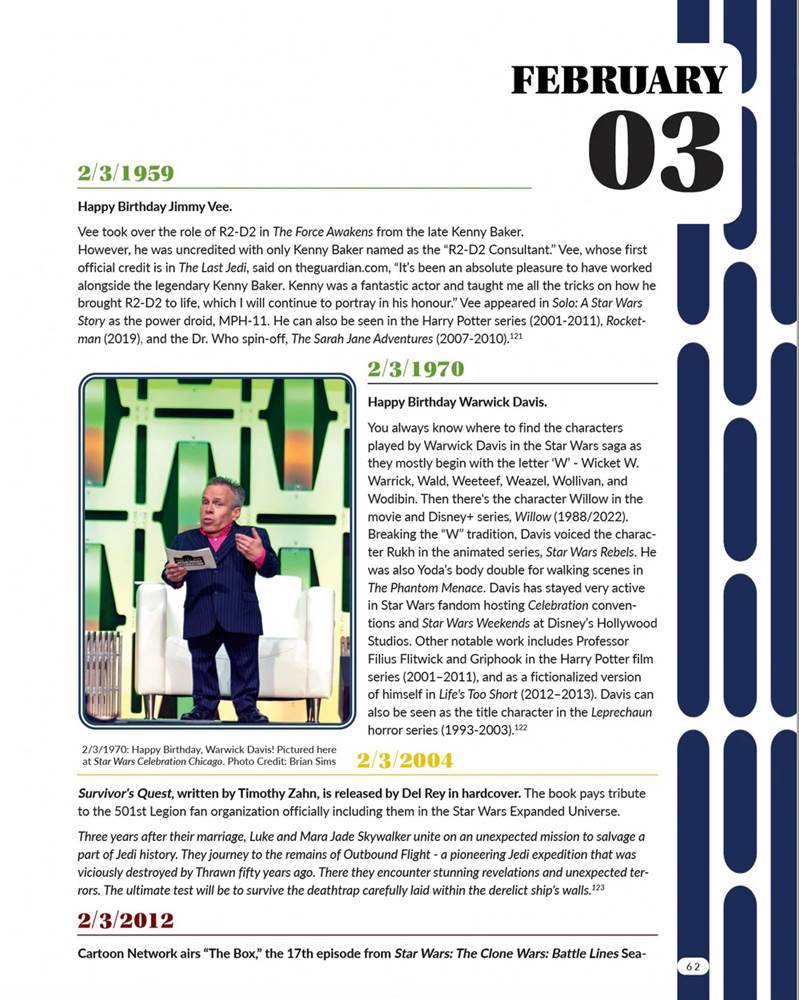 Just look at some of the things you can learn about from the above sample pages alone– production dates! Television episode premieres! A list of characters played by actor Warwick Davis that all begin with the letter ‘W’! There’s so much going on here that it couldn't possibly all fit into one volume (apologies to anyone, like me, who was born in the back half of the year; you’ll have to wait for the next one). There’s info about Star Wars comic books, novels, video games, and of course the movies themselves scattered throughout this lovingly crafted guide. The photos included are all very attractive as well, with many of them having been shot by Sarah Woloski and “Skywalking” collaborator Brian Sims, each of whom have an eye for the details of A Galaxy Far, Far Away and the energy of the events surrounding it. In a fandom chock-full of passionate enthusiasts, Richard Woloski is among the most ardent and dedicated devotees of the Star Wars franchise I’ve ever met. So do yourself a favor: listen to “Skywalking Through Neverland” and pick up a copy or three of the book the Woloskis have put so much effort into publishing themselves. How else are you going to find out when Ewoks: The Battle for Endor began principal photography, huh? 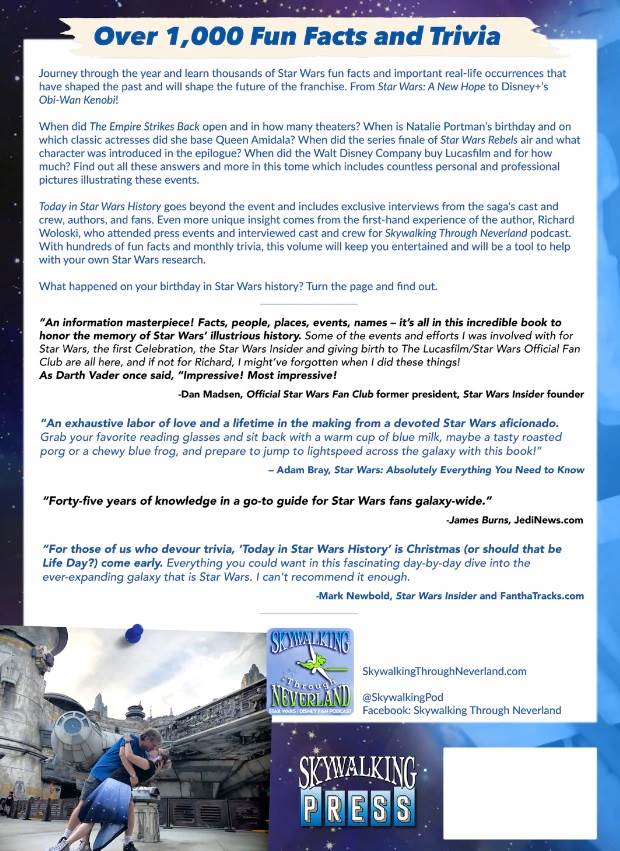 Today In Star Wars History will be released on Wednesday, May 25 (in celebration of the 45th anniversary of the original Star Wars film’s release into theaters– see? I learned something already) but you can pre-order the book right now on Skywalking Through Neverland’s official website.