Actor Ewan McGregor has been a comforting presence on movie screens since the mid-90s, breaking through with director Danny Boyle’s Scotland-based dramedy Trainspotting. But in 1999, he became a household name thanks to his turn as a young Obi-Wan Kenobi (the role originated by legendary actor Sir Alec Guinness) in Star Wars: Episode I – The Phantom Menace.

Two more prequels later, McGregor put Obi-Wan and Star Wars behind him, going on to star in Baz Luhrmann’s Moulin Rouge!, Tim Burton’s Big Fish, and even Disney’s live-action Christopher Robin. Now Ewan McGregor is stepping back into A Galaxy Far, Far Away by reprising his role for the Disney+ limited series Star Wars: Obi-Wan Kenobi. During a recent press conference in promotion of the series, McGregor talked about how Obi-Wan Kenobi came to be, his working relationship with fellow actor Hayden Christensen (Anakin Skywalker / Darth Vader), and the differences between making the prequels and making a Disney+ Star Wars show using contemporary filmmaking technology. 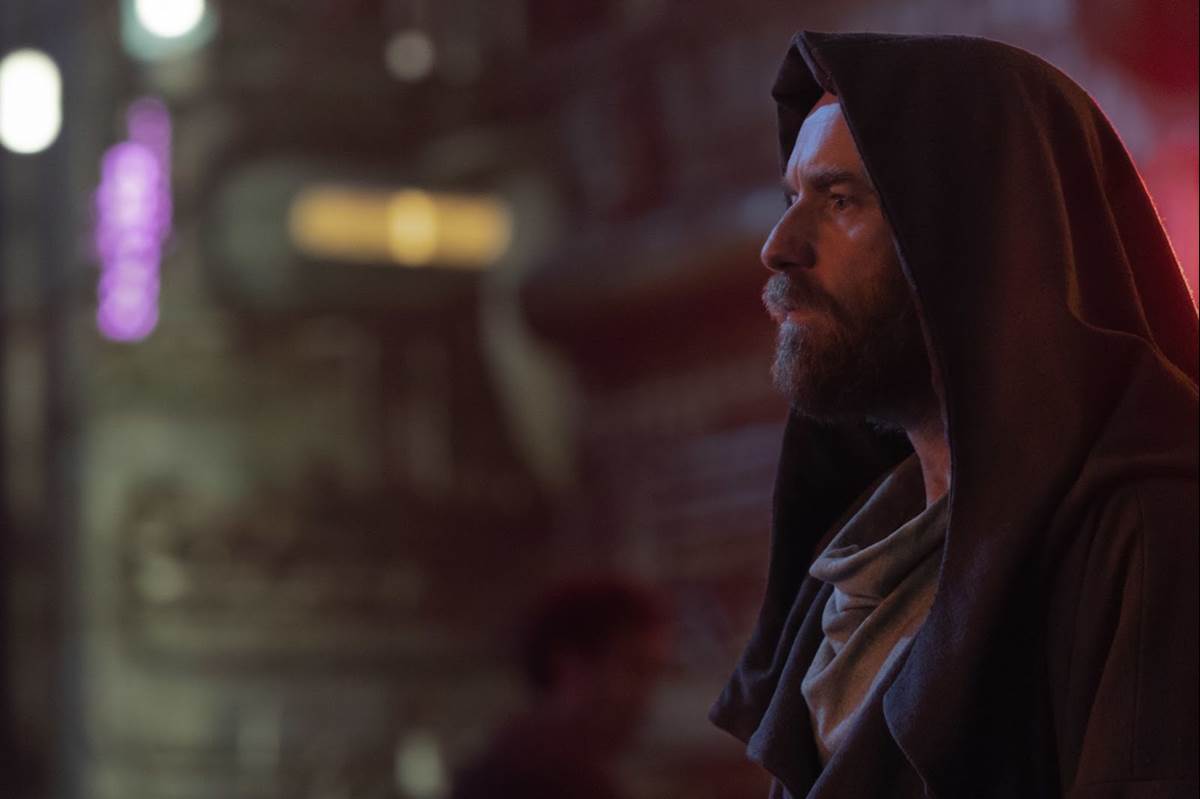 “Well, it was a very long, slow process of coming back to playing him,” says Ewan McGregor. “It was born of two things: A) I was just asked a lot. The end of every interview I ever did for years I was asked two things– would I do the sequel to Trainspotting, and would I ever play Obi-Wan Kenobi again. It was always the last two questions, as the publicist is poking her head around the door saying, ‘That's the last question.’ And I just started answering it honestly. I think I became more aware of the fondness that the prequel generation [has] for those films. Because when we made them, we didn't hear that. We didn't get that response, really. So gradually I started realizing that people really liked them and that they meant a lot to that generation. That warmed my feelings about them, or my experience of being in the Star Wars world. And then Disney just asked me to come in one day for a meeting because they kept seeing on social media that I'm saying I would like to play Obi-Wan Kenobi again. It looked like I was sort of touting for work at Disney's door, you know? ‘Could you cast me?’ But anyway, they got me in and asked me if I meant it and I said I would love to play him again. I think there's got to be a good story between Episode III and Episode IV, and that's what we definitely found, after a lengthy process of exploring some different storylines.”

“I think we've ended up [with] a really brilliant story, and one that will satisfy the fans, sitting between those two episodes. Because of what happens at the end of Episode III – Revenge of the Sith– the Jedi Order are all but destroyed, and those who aren't killed have gone into hiding and they can't communicate with one another– for ten years Obi-Wan has been in hiding. He can't communicate with any of his old comrades and he's living a pretty solitary life. He's not able to use the Force, so in a way he's lost his faith. It's like somebody who's stepped away from their religion, if you like. And the only responsibility to his past life is looking over Luke Skywalker who he's delivered to Uncle Owen and Aunt Beru. That's his only link to his past. It was interesting to take a character that we know and love from Alec Guinness's creation in the 70s of this wise, sage-like, spiritual man, and then the work that I did in Episode I to III from the Padawan to the Jedi to somebody who's sitting on the Jedi council… to take that Obi-Wan and take him to this more broken place was really interesting to do. And just being closer to Alec Guinness in age was interesting. Alec Guinness's Obi-Wan, when we find him as a solitary figure [in Episode IV – A New Hope], he's living in the desert alone. So I suppose and my Obi-Wan now is just a bit closer to his.”

McGregor also spoke about his warm relationship with Hayden Christensen, who is reprising his role as Darth Vader for the Obi-Wan Kenobi series. “We were just so close when we made Episode II and III together. We made them in Australia, so we were both away from home and we had so much time training for the fights together, and then being on set together. But also, because we were so far from home, we spent a lot of time outside of work together as well. So we were close, and then over the years, I guess we had slightly lost touch. I hadn't seen Hayden for years, so when I saw him again and was able to talk about this project with him, it was very exciting. It was great. And when we were acting together, it was really like some sort of time warp– looking across at him on set was like the last 17 years didn't happen at all. It was really peculiar.” Speaking of combat training, he also got to do some alongside newcomer Moses Ingram, who plays Inquisitor Reva. “It was fun. We started months before the shoot together in the fight gym, and it was great. It was a nice way to get to know each other. Our fight coordinator is really an amazing, thoughtful man, and he'd taken the fights that we did in the original three films and he studied them with his stunt crew and developed them, so it was very thoughtful. It's not just random. Our fight styles are very different anyway in the piece, as they should be. So I was over on one side doing my choreography and [Moses was] on the other side doing [hers] and we'd sort of try not to clash into each other. It was fun, though.”

“The fight scenes are always something extra when you're doing something like this because they just require such a lot of preparation and there's a real nervousness when you walk on set to do a fight that you've been learning and training for for months. Your stomach gets really nervous, because you want to do it the best you can, and sometimes you're shooting them two [or] three days in a row. It requires an enormous amount of stamina, which is also why getting fit beforehand was really important, so we could maintain that.” And what about working on Lucasfilm’s revolutionary new virtual production sets, better known as The Volume? “I'd never worked on the StageCraft set before, and it was such a game-changer for us. The experience of the first three, especially Episode II and III, there's so much blue-screen and green-screen and it's just hard. It's very hard to make something believable when there's nothing there, you know? George [Lucas] was pioneering that technology. He was pioneering sound and image and he was pioneering the cameras and the visual effects, so of course he was wanting to utilize it as much as he could. But for us it meant that more and more we were on a blue-screen or a green-screen and that's challenging for the actors, for sure. And [on Obi-Wan Kenobi] we were in this amazing set where, if you're shooting in the desert, everywhere you look is the desert. And if you're flying through space, then the stars are flying past you as you scout along. It's so cool.” 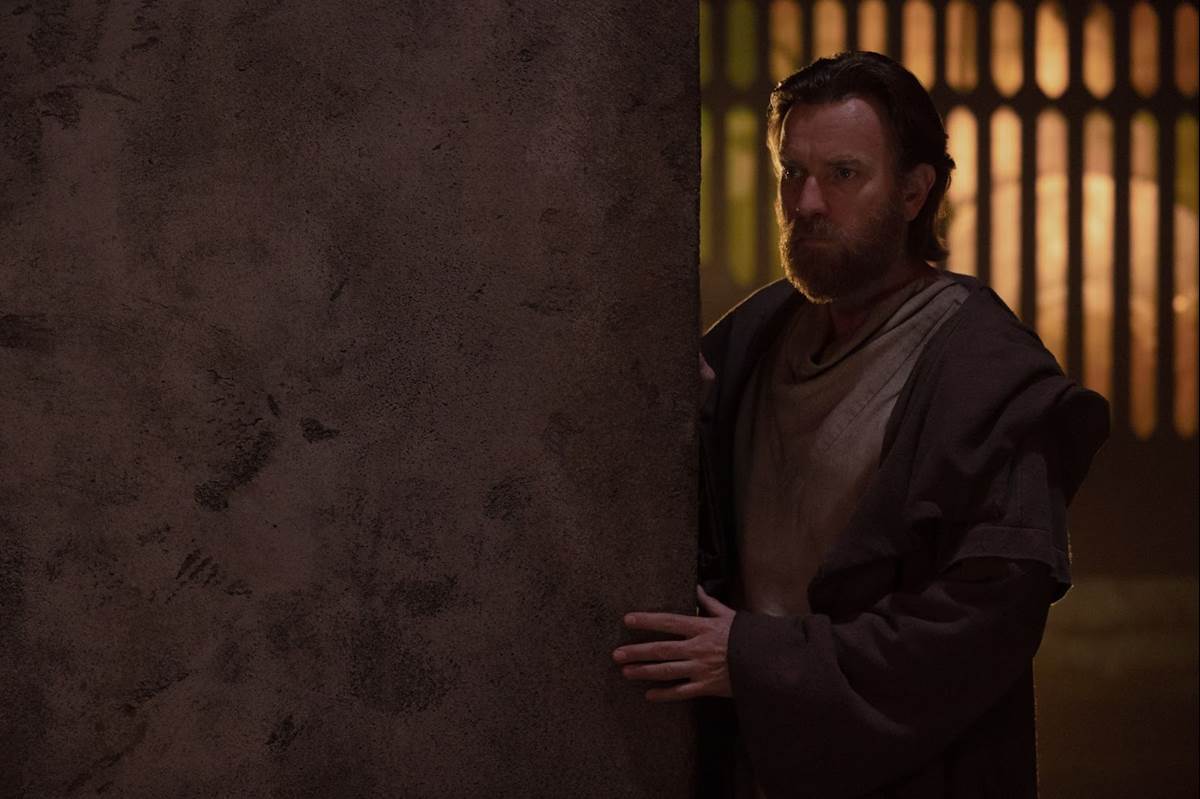 “The technology is so different from when we made the original movies that it felt like a different experience, but I don't think [it’s] because it was a TV show. The beauty of it being a series is that we've got longer to tell the story, but because [Deborah Chow] directed them all and it's her singular vision throughout, it did feel like we were just making one movie. The episodic nature of our series falls really cleverly in the storyline, but it is one driving narrative. The Mandalorian feels more episodic, because it suits that storytelling and it, of course, has a driving storyline through each season. But ours is like a movie that just happens to be split up into [six] episodes. That's how I feel about it.” Was it easy coming back to playing this role he occupied for three feature films all those years ago? “[One] thing I had to work on was his voice. When we came to do the actual scenes with these other actors [during casting], I was doing a sort of vague English accent and it wasn't really Obi-Wan's voice at all. And I was [thinking], ‘Oh dear; that's not very good.’ Luckily we had months before we actually started shooting, so I went  back and did some homework with Alec Guinness and what I'd done before in the original films. Playing him felt totally like he'd always been there ready to come out any minute, but just his voice needed a bit of work.”

“It all comes from Alec Guinness. You know, Alec Guinness had this wit behind his eyes all the time. He had a twinkle in his eyes, and that's in the writing [as well], but I always try and think of him and try to hear him saying the lines. And that's why I think the writing was so good in this because right from the word ‘go,’ all of his dialogue felt to me like it could have been Alec Guinness saying it. Then I knew we were on the right path, at least with him. He's got a wit to him.” Lastly, how does Ewan McGregor feel about the reappraisal of the Star Wars prequel trilogy in recent years? “It means a lot, actually, because one of the difficult things about being in the prequels was that when they came out, they didn't seem well received, because there was no social media. There was no direct avenue to the fans at the time. And also, the fans were kids. We made those films for [kids]. When the first film came out, A New Hope, I must have [been] six or seven [years old], and I'll never forget that feeling and my relationship with Star Wars, all those first three films. That's one of the crazy things about being in Star Wars now is that I'm in it at all, having been that little kid. And so once those kids who were my age when the prequels came out grew up a bit, and I was able to meet them and I started hearing that people really liked them and they couldn't understand why I thought that they weren't liked when they came out. It meant a lot to me. I'm sure it's one of the reasons we're all [sitting here]– why I wanted to do this again was because of that. The Star Wars fans are amazingly passionate and they're probably some of the strongest fans in the world, for anything. So to be able to give them something like this– to make the [Obi-Wan Kenobi] series, which it seems that there's been a hunger for for some long time, to be able to give that to them now is really exciting.”

The first two episodes of Star Wars: Obi-Wan Kenobi will debut this Friday, May 27, exclusively on Disney+.