D23 got into the intergalactic fun of Star Wars Celebration with a presentation on Friday, May 27th, with a panel called “35 Years of Star Tours Adventures.” Hosted by Ashley Eckstein, the panel took a look at the past and present of Star Tours in Disney Parks while also teasing future adventures. 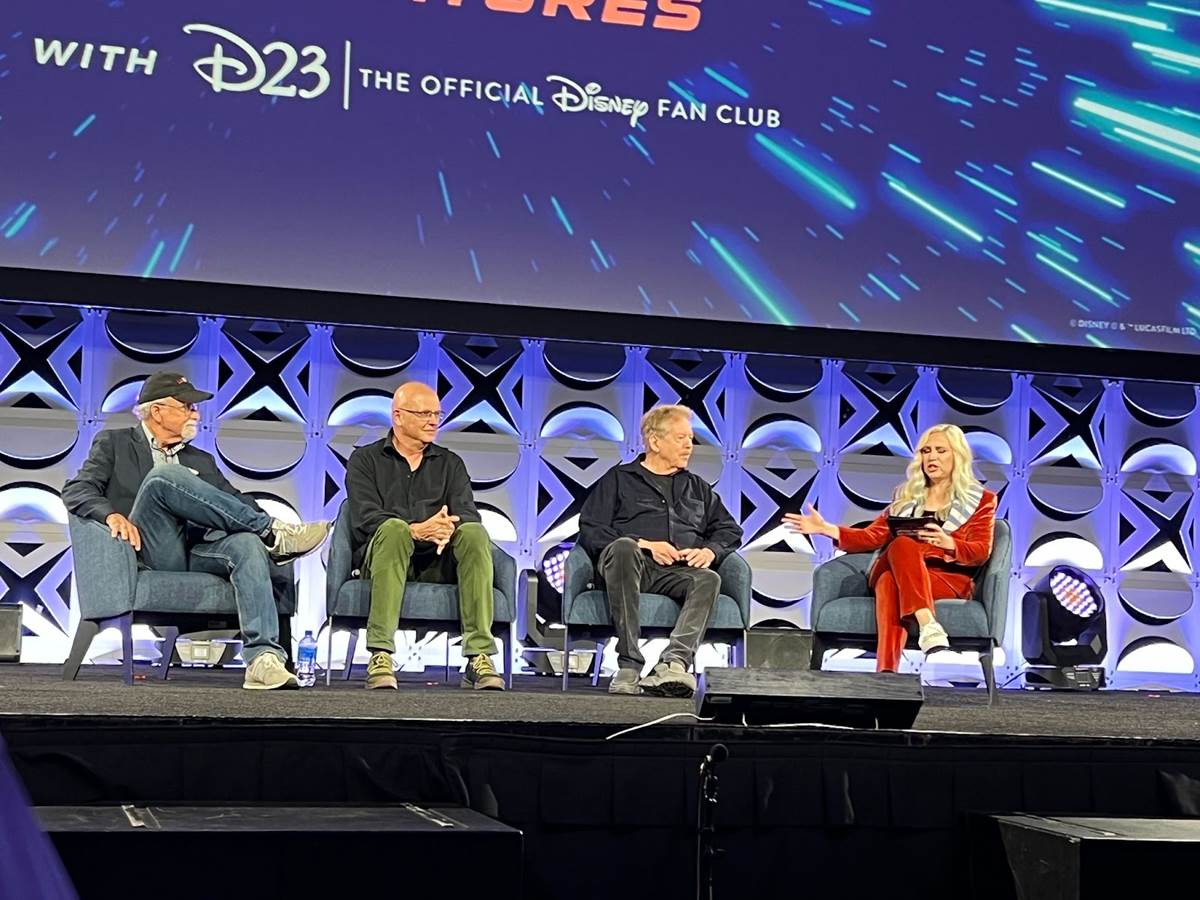 Tony Baxter, Chris Runco, and Dennis Muren joined Ashley on stage to talk about the original attraction. Tony and Dennis revealed that they actually met at a party before Star Wars was released in 1977. Tony recalled the party having lots of props and costumes of weird aliens, with  guests at the party trying them on. Dennis revealed that these were from the Cantina scene, some of which was filmed in L.A.

Tony Baxter is the mastermind behind the concept of Star Tours, who pitched it to then Disney CEO Ron Miller. Ron invited Tony up to the Disney family’s Silverado Vineyards in Napa, which is near Skywalker Ranch. It’s at Silverado that Tony first met with George Lucas and pitched his idea. His original concept was for an indoor roller coaster that would’ve had three possible tracks, but space limitations made it infeasible. Military training simulators ended up being the answer to creating a Star Wars experience at Disneyland.

Dennis Muren got involved when George Lucas personally asked him to. Dennis remembers driving by Disneyland during its first week of operation in 1955 on a family road trip, but he didn’t get to go. The trickiest part of the project was creating the 4-and-a-half minute video that needed to be one long continuous special effect. There were, in fact, cuts about every 20-seconds, hidden by laser blasts or a motion blur. Models from the original trilogy couldn’t be reused due ta a difference in scale, so everything seen on screen had to be created especially for the attraction.

Tony Baxter discovered that the hydraulic system could only perform certain actions at once and needed time to restore energy. He created a guide that would help craft the story, but there was a trouble spot where the entire system needed to regenerate. The solution came in the form of Star Tours getting caught in a Star Destroyer’s tractor beam, allowing the simulator to simply rest on its rear legs while the hydraulic systems regained power. 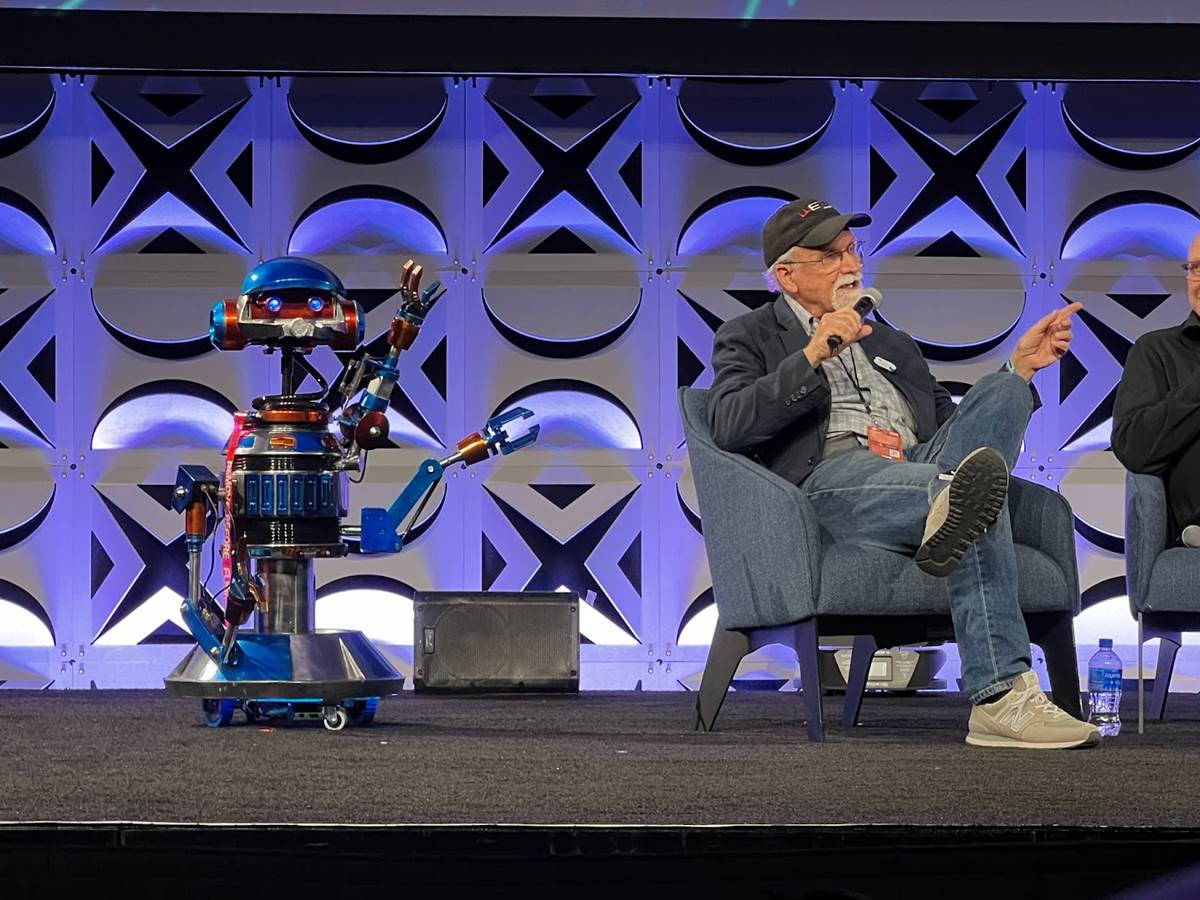 Chris was the designer of Captain Rex (RX-24), a character conceived by George Lucas. He was no stranger to robots, having created characters for EPCOT. His prototype was made in the same fashion as many of the Star Wars droids, comprised of parts he found at junk stores. A story moment was inspired by a routine trip to a junk store in Burbank when Chris found a ribbon that read “remove before flight” from a real aircraft. He also searched through the drawers of unused parts from MAPO to create the character. Rex isn’t the only droid Chris worked on for the attraction, repurposing geese from America Sings and making his own Mouse Droids out of off-the-shelf LGB model trains. As a fun Easter Egg, Chris’ sons were in the preshow video taking a flash photo and upsetting Chewbacca while demonstrating what not to do on the attraction.

The original Star Tours ran until 2010 when Disney Parks switched the projections to digital. Now in 3D, the attraction could offer an ever-changing variety of destinations and surprises. Taking the stage to talk about Star Tours: The Adventure Continues were Meghan Short from Walt Disney Imagineering and Bill George from Industrial Light and Magic. 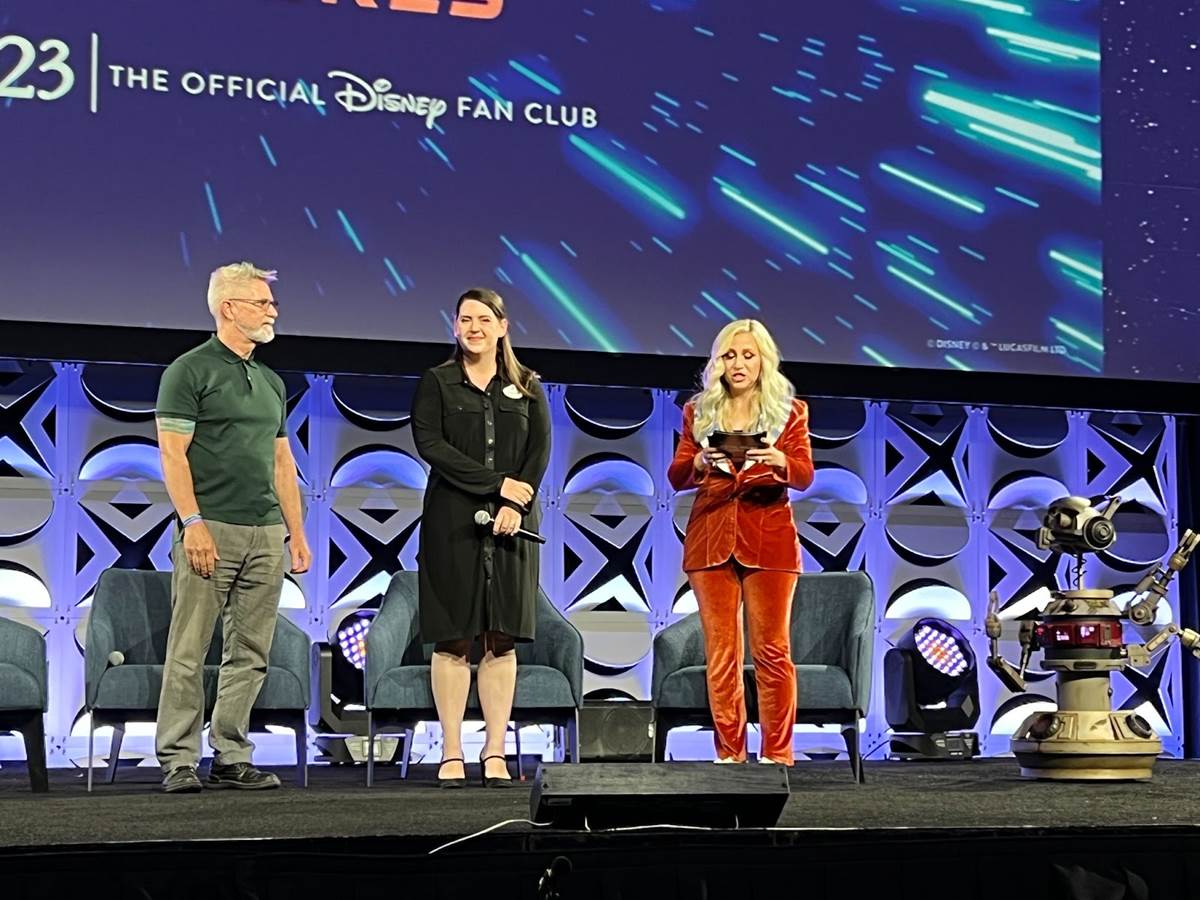 One of the biggest challenges to solve when creating the newer version was a moment where Princess Leia contacts Star Tours asking for help through a hologram. Tony dug through the Lucasfilm archives and found footage of Carrie Fisher from A New Hope recording the message to Obi-Wan Kenobi from unused angles. A look-alike was filmed saying the new dialogue, her mouth blended with Carrie Fisher’s face to create the effect. Attendees got to see the double’s recording session as a special look behind-the-scenes.

Ashley Eckstein shared that she was at the grand opening of Star Tours: The Adventure Continues at Disney’s Hollywood Studios and she recalled that Bob Iger and George Lucas were particularly chatty leading up to the ribbon-cutting. She later learned that the two had breakfast that morning, a meal over which Bob Iger proposed Disney acquiring Lucasfilm, a deal that was finalized in 2012. So without Star Tours, it’s possible that Disney wouldn’t have come to own Star Wars.

Since the update to Star Tours, Meghan and Bill have worked together to add additional destinations and characters to the experience. Walt Disney Imagineering is known for its creativity and when adding the planet Crait from The Last Jedi, they took the opportunity to not only pay homage to the asteroid sequence from the original attraction but also found a creative solution to blasting through red crystals: crushed-up red Jolly Rancher candies.

For a long time, Star Tours was the closest Guests could come to an immersive Star Wars experience. Flash-forward 35 years and we can step into this world through Star Wars: Galaxy’s Edge and Star Wars: Galactic Starcruiser. Speaking of Batuu, Meghan and her team got to help give Guests their first preview of the land when it was added as one of the destinations on Star Tours: The Adventure Continues. Fun fact: the digital model of Batuu was reused in both Millennium Falcon: Smuggler’s Run and Star Wars: Rise of the Resistance.